A new vision, a fashion revolution and sales to match – but can Alessandro  Michele’s overhaul of the historical brand prove to be timeless or just a talking point?

A cold Friday in February 2017 and Kering, the French luxury goods holding company, has just posted its latest figures stating a huge and very warming 12.7% year-on-year revenue increase in Gucci’s 2016 performance. ‘All signals – both qualitative and quantitative – confirmed the brand’s spectacular growth trajectory, which is being driven by Alessandro Michele’s highly creative vision.’ said the Kering press release. Thanks to the energising overhaul by Alessandro Michele, who is not only the latest sweetheart of the fashion editors but also, as the results show, the world’s consumers, Gucci reigns supreme in the Kering stable ahead of giants Saint Laurent and Bottega Veneta. Michele has turned the fashion house, originally found by Guccio Gucci in 1921, on its head. His magic is working and the pieces, the silk pleated floral skirt, the pearl button coats and the embroidered sneakers, are selling like hotcakes. Flowers and insects, lions and tigers are all bursting with life in Michele’s bejewelled and glittering garden.

One would have to have missed a rather significant chapter in fashion history to be unaware of this new momentum. Rather like Phoebe Philo heralding a new love for the skater shoe over at Celine a few years back (the high street is still bursting with skater shoes today), Michele, the leather goods design director turned creative director, has singlehandedly brought ‘Geek Chic’ into the spotlight. Bespectacled models, tea cosy hats, crochet knits, heirloom brooches and sensible loafers, are now de rigeur for anyone with a hint of fashion-forward thinking. But what if you aren’t a member of the fashion crowd? What of the business women, the lawyers, the investment bankers among us, those wanting to be taken seriously in the boardroom, the ‘real’ women – do you still go, bonus in hand, and venture to Gucci for a timeless, investment piece? Do you dare?

Michele’s magic has transformed the fashion landscape, answering the latter question with a resounding yes. The designer has hit upon a clever way of delivering this vision to a wide-ranging customer base that previously visited Gucci for black suits, black evening gowns and black bamboo-handled handbags.  The trademark and beautifully classic red, green and blue stripes synonymous with Gucci’s legacy have not been replaced. The Gucci ‘G’s’ still find their way onto the bags and the loafers. The difference is a new eclecticism, now the key ingredient. Michele pairs bold, even glittery colour ways with sensible every day heel heights, for example.  A neck ruffle and velvet ribbon is attached to an otherwise plain and extremely useful cream silk shirt. A Gucci stripe is adorned with a whimsical pineapple on a plain and practical sneaker. As Emma Elwick-Bates of US Vogue comments, ‘When I think of great style leaders past and present it’s that mystery, even eccentricity, that stands the test of time, and his (Michele’s) attitude emits this beautifully’.  Sought after by city types as much as fashion editors using their minimal pay packets to actually buy rather than borrow, what we now see at Gucci are wearable items made into special ‘forever’ pieces by bursts of Michele’s risky modernism.  This, as the financial results prove, is the key to making a customer feel they are buying into a must-have fashion story but also a whole new fashion seed change that will stand the test of time.

‘It’s about shopping wisely (isn’t it always?) and asking yourself, ‘Will I still wear this in 10 years time, as a 30, 40, 50 something’?’ agrees one female lawyer with an interest in the fashion scene. ‘The chances are I will want to wear these items in years to come and I will certainly save them for my daughter’.  One doesn’t of course need the whole crochet/ ruffles/ bows/ frills/ glitter look, obviously (though I’m told some customers really are walking in to Sloane Street and buying the entire look).  This is about pieces that can be worn with denim, with wool, with navy, with cream, at a casual dinner, at a summer barbecue, in spring, and in the depths of winter. I have no doubt that Audrey Hepburn, the doyenne of timeless classicism, would look as exquisite today in Michele’s cropped jackets and neck-ties pedalling around a film set in Rome as she did in the original Gucci designs of the1950s. Looking back and looking forward is just the combination that any creative director stepping into huge designer house shoes strives to achieve. It’s never ever easy.

So many of my colleagues at Vogue wish the likes of Duchess of Cambridge would break with formality and go for a hit of Gucci. She is so genuinely loyal to British designers but wouldn’t she look exquisite in a red, wool Gucci suit with pussy bow collar and silver sparkle loafers?  Timeless and yet bang on trend, it would be a match made in fashion heaven. Or imagine the Prime Minister, Theresa May, revelling in a pair of heeled red suede loafers outside Downing Street to update us on the latest Brexit twist and turn. (A Prime Minister who can wear leopard print kitten heels can certainly pull off a red Gucci loafer.)  The Gucci style can be pared down and adopted by all characters and ages and very few brands are achieving this right now.

Of course everyone is asking can Michele keep up the glory, Will his luck run out?  It’s so very typical of our human scepticism to ask this rather than just revel in the magic as it unfolds. We have to pre-empt the future and we miss the excitement of the present as a result. What makes this particular twist so modern, and therefore so important, is the modern social changes this Gucci vision touches upon. Michele celebrates the quiet ones, the ‘geeks’, for instance, who are now given a chance to sing and be heard. The gender fluidity between Michele’s female and male designs mimics our ever-growing acknowledgement of the transgender topic, which will doubtless be a significant chapter of the 21st century.

Kering will be patting itself on its back after these results, and rightly so. The quiet creative, once in the background, has been acknowledged and revered and very definitely brought to the centre stage.  Michele’s new world of colour pulls items and motifs from different cultures, unifying the world’s differences and applauding them. Surely that’s a wonderfully positive trajectory for any design house or brand to promote in the turbulent time in which we live. 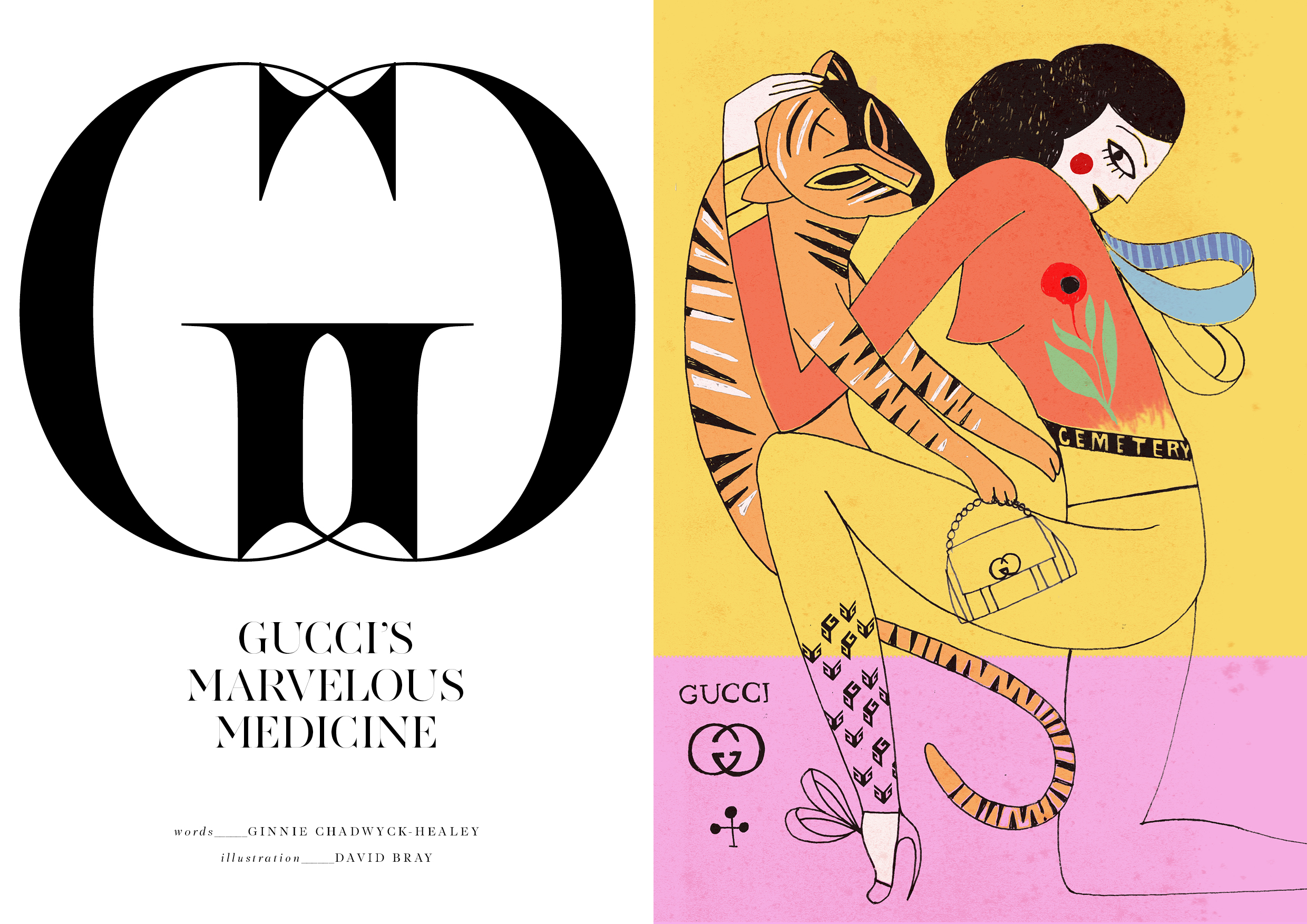 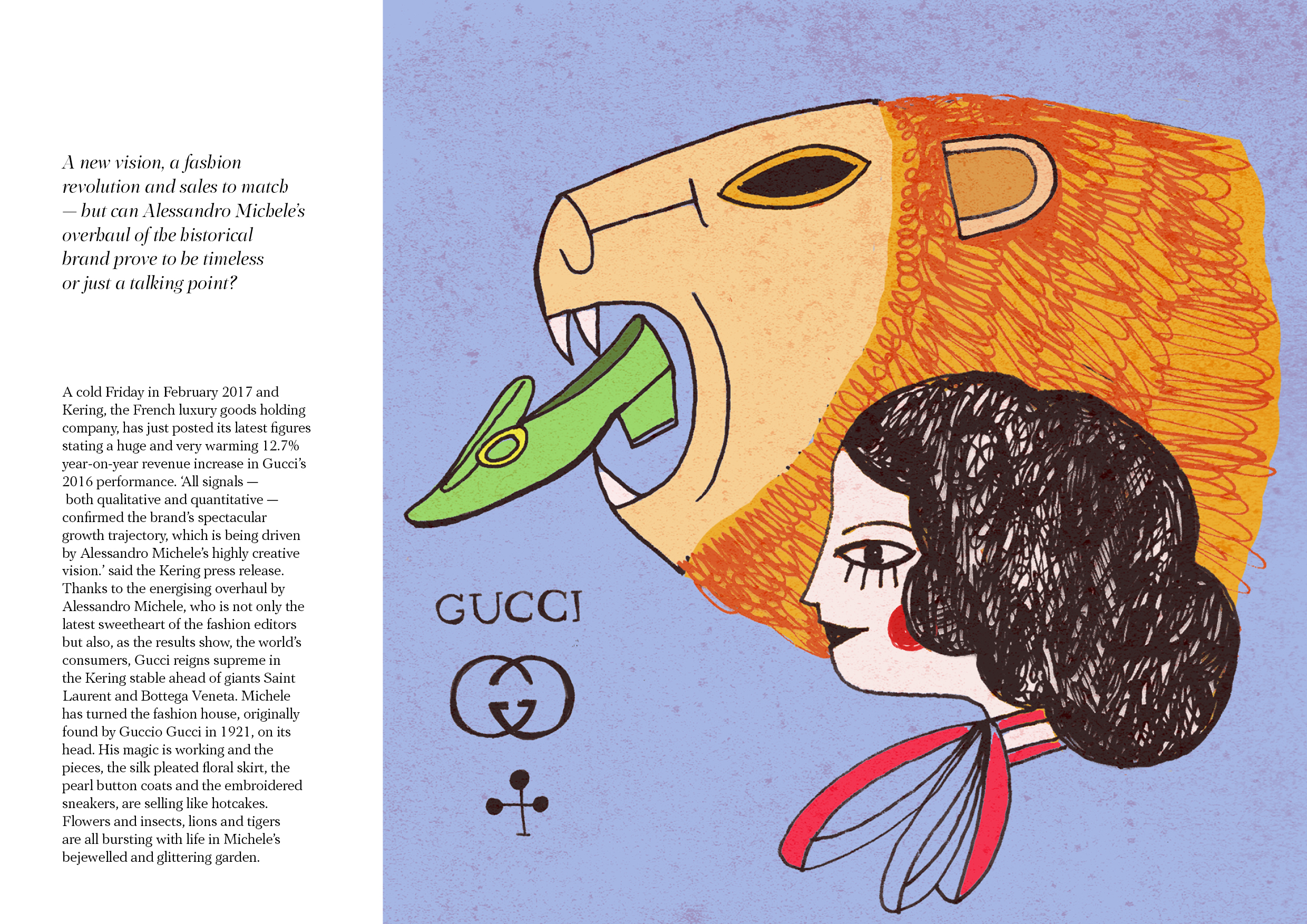 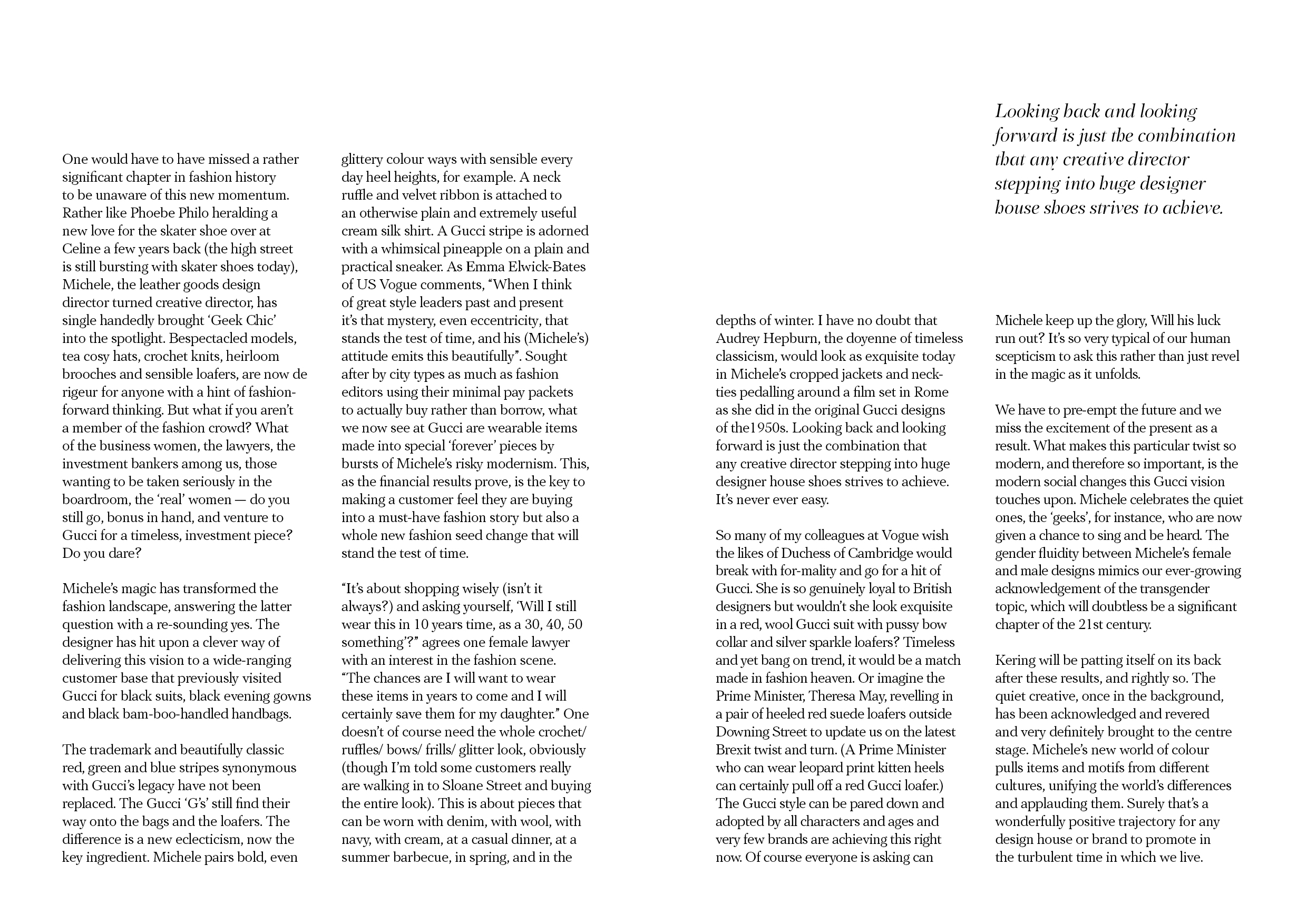 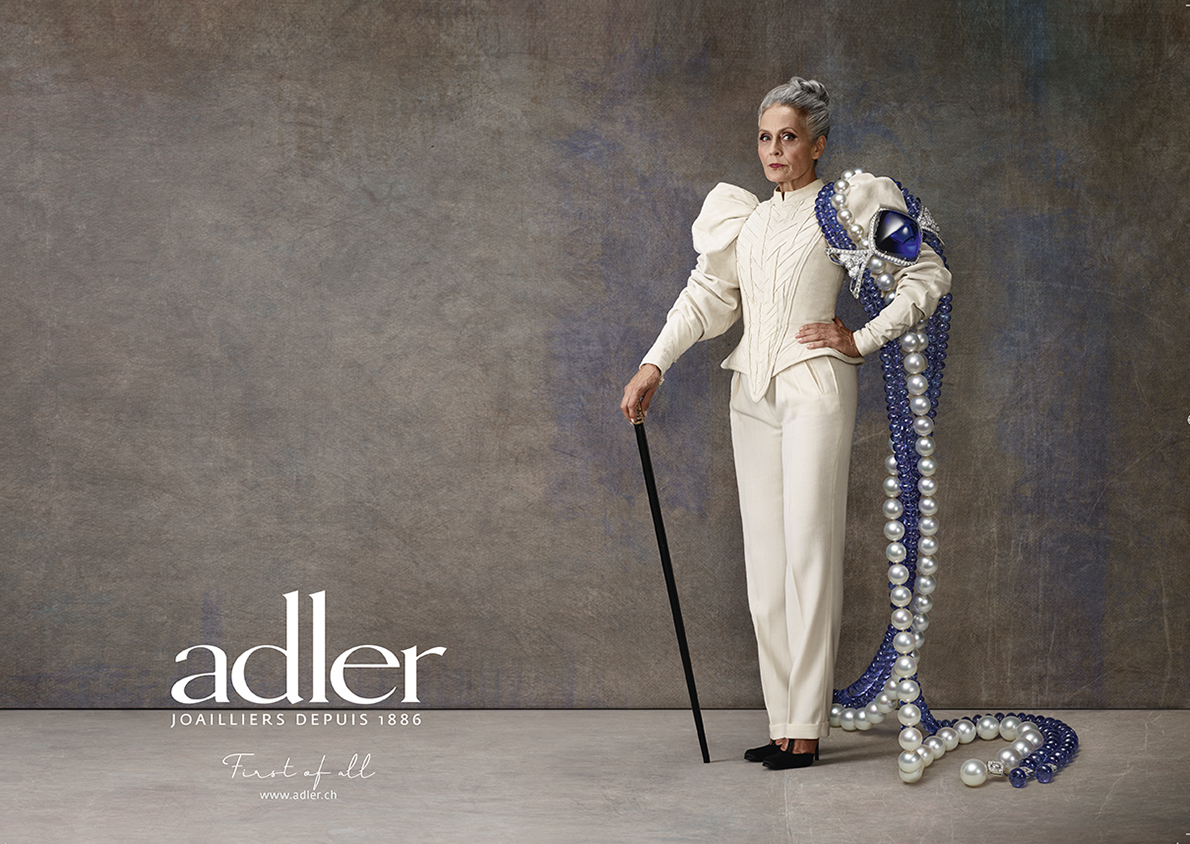