Words and photography by Ursula Lake

‘Don’t leave the hotel after dark, it’s really not safe!’ said my brother in law ominously when I asked him for some tips on visiting Mumbai. I nodded seriously, but my inner voice screamed, ‘Fuck it!’. With just two days in the sprawling city, I had a desperate need to make the most of every second, so on my first night in Mumbai (after a truly life-changing swim in the epic pool of the Taj Mahal Palace hotel) I ventured out, camera in hand, and walked the few blocks to Colaba, to find the street market that stays open till late every day of the week.

I am no professional photographer, by any stretch of the imagination, but I love taking pictures, so I eyed up the huge photographic potential on the streets while the fresh coconut I had bought was butchered by a machete-wielding teenager. How to go about taking peoples pictures? Is it patronising? Is it rude? Would I do the same in a market in London? Answer: probably yes, so maybe that answers all those questions? But would the people want me to take their picture? It bothered me that they might not and I would unwittingly offend them. That night, I wandered around, rather lacking in self confidence, and stole the odd surreptitious shot.

I photographed some skinny goats, lying next to a hand-painted, time-worn ‘Coke’ sign; the flecks of red paint visible in their fur after a good scratch. I snapped a ramshackle tangle of bikes propped against a vegetable stall and a statue of basket carrying, sari-clad woman against a tangle of electric wires, but nothing with a living and breathing human in the shot.

I bought some snacks from a vendor with a truly excellent moustache and matinee idol, brilliantined hair. Plucking up the courage, I asked him if I could take his picture. He acquiesced but in the picture, his expression is slightly disapproving and aloof. I circled the stall an amazing looking man a few times. He sat on the floor with his wife, bare-chested and cross-legged selling onions and potatoes against a fissured, turquoise wall and cooled by an electric fan. I gestured to him with my camera. Could I? He frowned and shook his head violently, so I moved on.

The next day I decided to get some expert help. The exuberant Amish met me in the hotel lobby enveloping me in a bear hug only slightly bigger than his smile. He decided, pretty much immediately, that we were going to be best, best, BEST friends. To say that Amish is not your traditional guide would be a huge understatement and, as a result, we got on like a house on fire. My first lesson from Amish was to teach me why it was really bad etiquette to refer to Bombay as Mumbai. It shows a total lack of breeding. Bombay it is then.

Weaving our way through the permanently congested Bombay streets, we reached the Chor Bazaar, the thieves market where you can buy pretty much anything you never dreamt you needed. Fancy a hand-strung floral garland? They have them aplenty. Flat tyre on your tuk-tuk? And you also need a length of rope? Look no further. Fake British football jerseys? Too easy! Need to buy your body weight in pre-peeled garlic? It’s a synch if you know where to look. And of course, when you are best, best, best friends with Amish, it’s even easier as he knows everyone and can expertly guide you to find the treasure hidden in every thickly cobwebbed corner.

Amish’s real gift to me was his photography etiquette lesson and this was my real discovery of the trip. It goes something like this:
Step1. Be direct and bold and ask straight out with a big smile on your face and hopefully they will allow you one shot.
Step 2. Immediately show your sitter the photograph, in India, a good head waggle confirms that they like it.
Step 3. Ask them straightaway if you can shake their hand. Then you have really sealed the deal. Amish explained that for a Bombay resident, a western woman wanting to shake their hand would be considered a big deal. And when you make this tiny gesture of friendship, is when the genuine smiles flow
Step 4. You can now take a few more shots of them as you have gained their trust, but don’t be totally surprised if they don’t want to smile for the camera as they are often embarrassed by their stained teeth or absence of any teeth at all.
Step 5. Got your shot? Another handshake and you are done, generally with a recommendation of who your next photographic victim should be.

In terms of my own photography goals, this was life-changing advice. I moved from subject to subject, exchanging chats with some, smiles with others and having the most fun I had had in ages. Buoyed by that day’s photographic success, I ventured out to the market I had visited just 24 hours earlier. In the same sultry heat were the same tangle of streets and alleyways, lit by the same street lamps with the same smell of turmeric and cardamom and the same soundtrack of Bollywood hits. But in this heady, exotic mix there was one key difference: me and my new found skills.

As I wandered around the now familiar market, the city and its inhabitants magically opened up to me. This time, I followed the rail thin, stray cats into the dark, unpromising alleyways to discover my photographic nirvana. I met a fabulous looking guy, grinding flour and proudly sporting Union Jack printed shorts with a jauntily angled hat and enjoyed a post-portrait, floury handshake

I chatted with some guys in the local barbers while they trimmed a moustache and watched TV. I bought some sari trims to use as Christmas wrapping ribbons for a very ‘good price’. I shared a joke with a street vendor who cheekily told me that I would struggle to take a photograph of the owner of the next door stall as he was too fat to fit in the picture. Drank some chai with the man from whom I had bought some tooth destroyingly sugary treats. And just when I thought my day couldn’t have got any better, I found myself back in the spot in the market, by the cracked turquoise wall, with that same bare-chested, crossed legged man sitting with his wife, selling his vegetables under a single bare light bulb. And guess what? This time I got my shot. 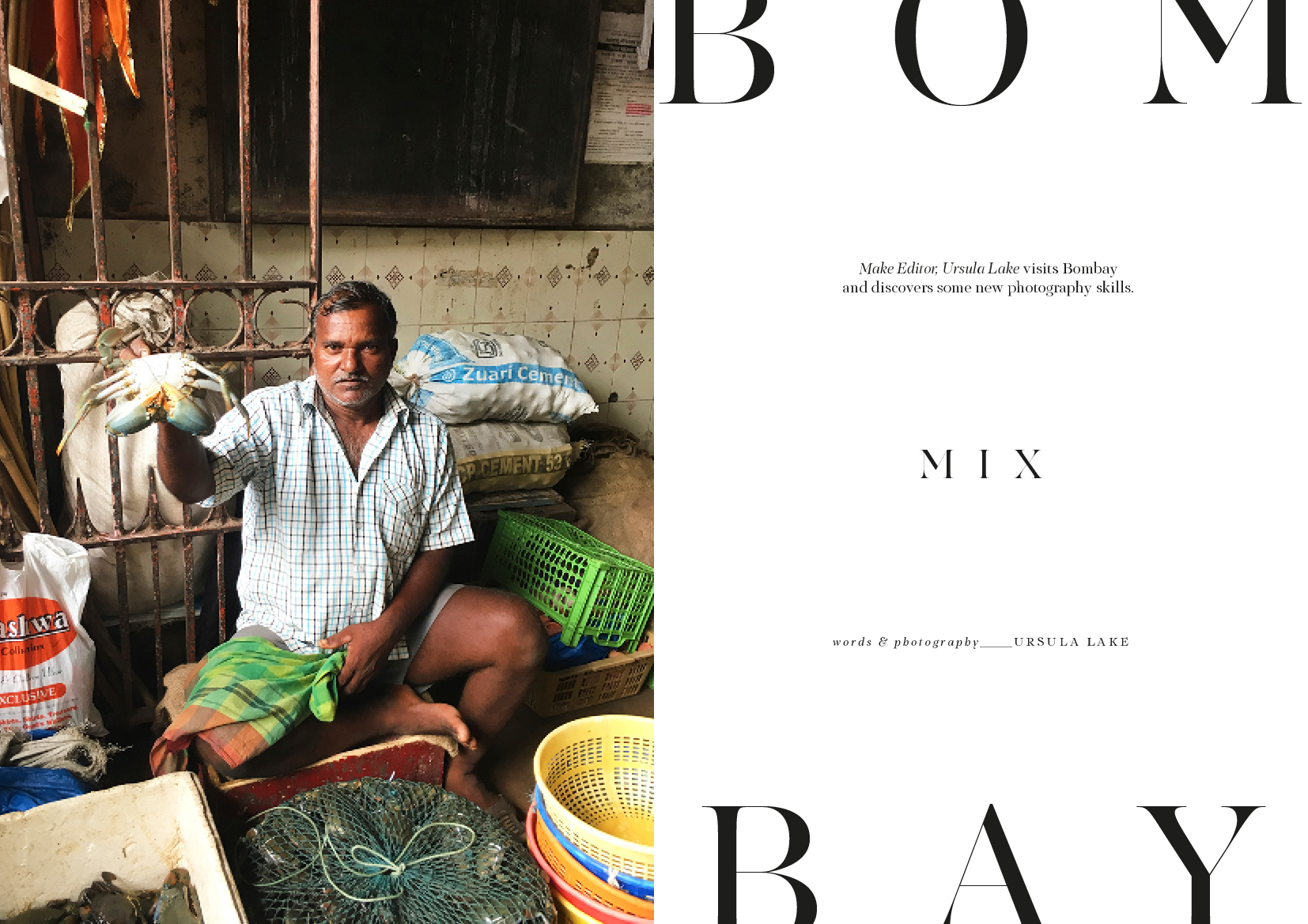 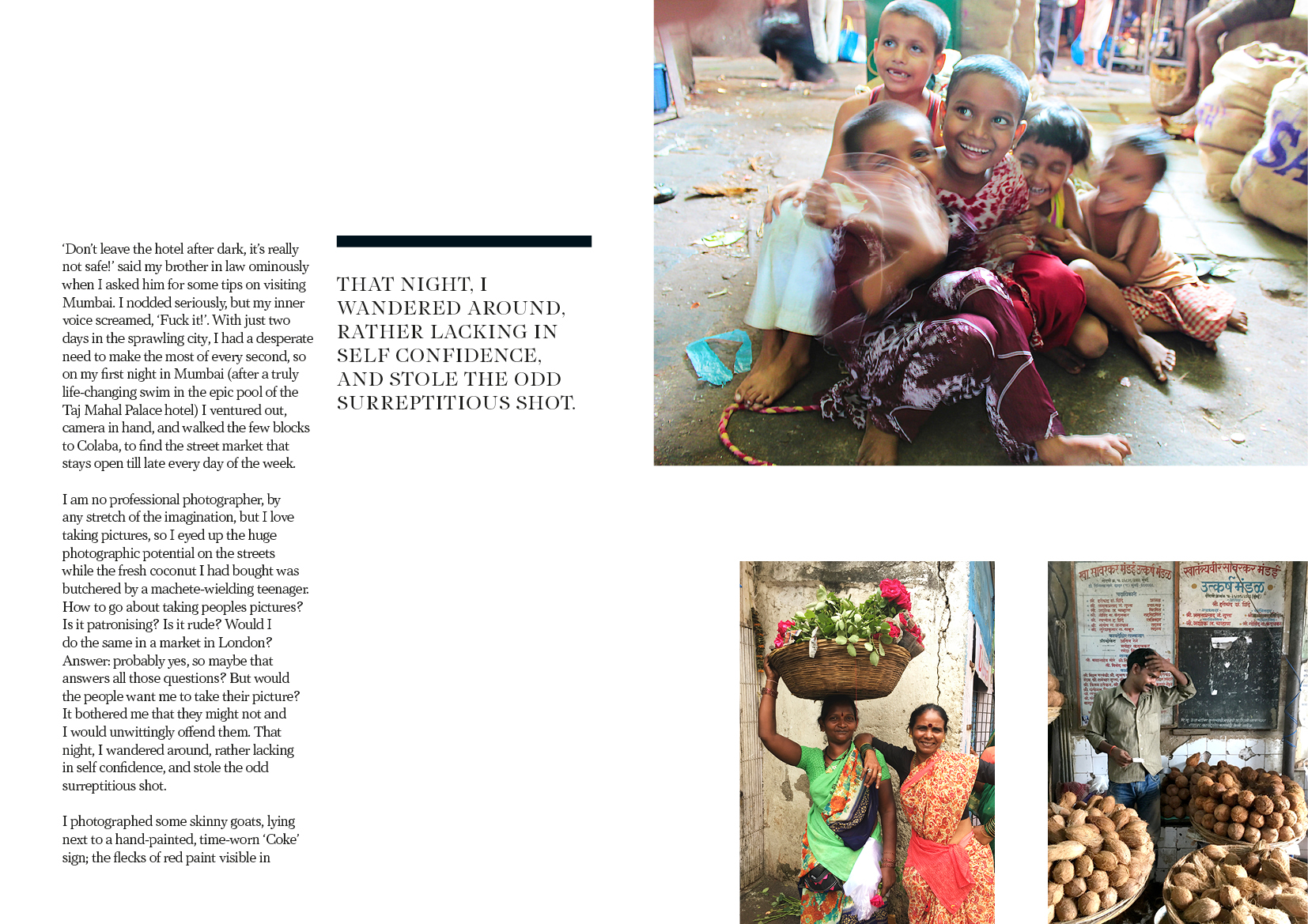 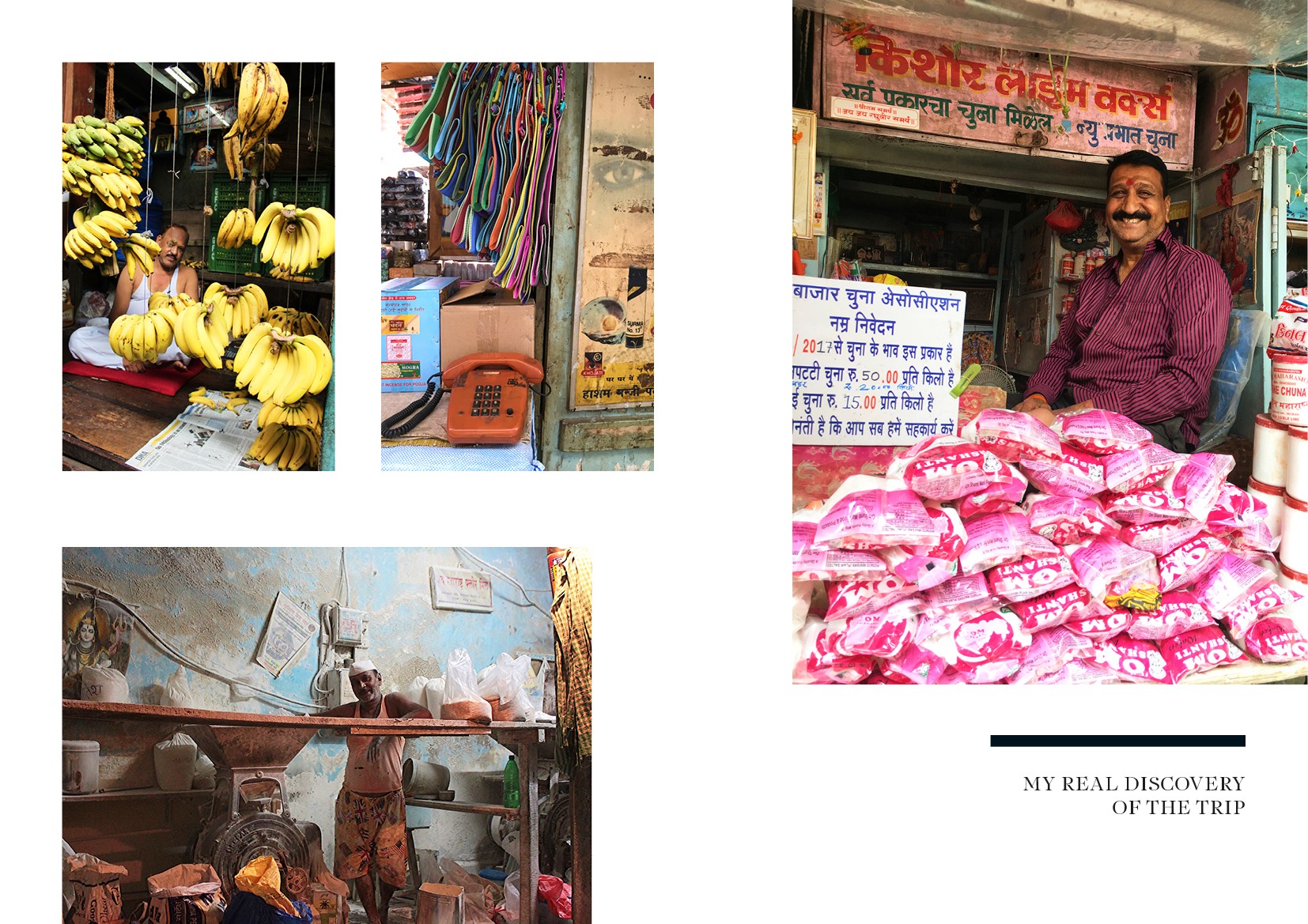 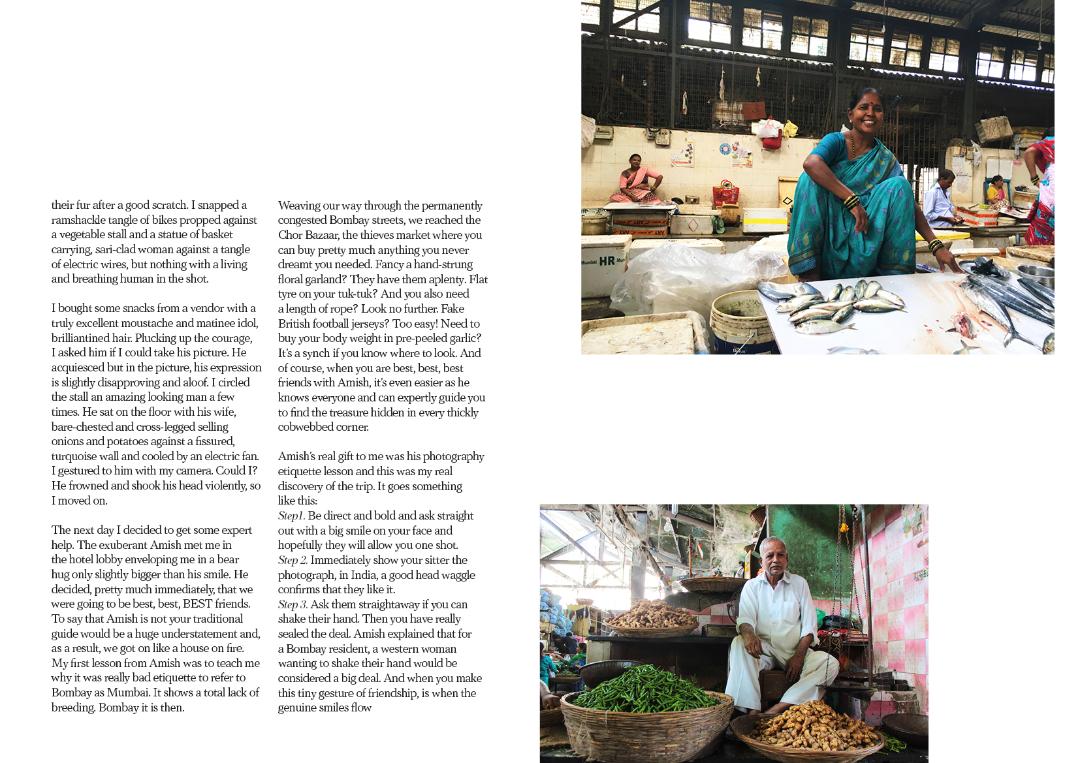