In the eleventh issue of Make, we discuss the iconic Doc Martens, or should that be Mäertens?

DMs are back. Not that they actually went away, they just drifted out of fashion, but now the fashionistas are once again declaring that DMs are cool. Not bad for a shoe that will be 60-years-old next April. Or 72 years if you prefer to call them Docter Mäertens! Yes, they were originally German, and a favourite of hardworking middle-aged hausfrauen long before they became a symbol of youthful rebellion for British teenagers.

Klaus Mäertens was a doctor in the German army when he injured his foot in a skiing accident while on leave in 1945. Finding his heavy army boots too painful to wear he set about designing an improved boot with soft leather uppers married to a cushioned rubber sole fashioned from old tyre treads heat-welded to create air pockets. In 1947 Mäertens went into business with Dr Herbert Funck, an old university friend, and they set up production of their ‘air-cushioned’ boots in Seeshaupt, a small town at the foot of Lake Starnberg in Bavaria. Not exactly fashion items, the original DMs did have a huge advantage for people who had to spend long hours standing that they were extremely comfortable. During the first decade of their existence, the ‘Deutche DMs’ built up a strong following amongst older women who clearly put feel before fashion.

By 1952 business was so good that the partners opened a new factory in Munich, and in 1959 they decided it was time to go international and placed an ad in the British trade journal ‘Shoe and Leather News’ looking for a partner. Bill Griggs, of the long-established family firm and manufacturer of traditional work boots, R. Griggs & Co, of Wollaston, Northamptonshire, immediately seized the opportunity and bought the patent to Mäertens’ invention. Fortuitously, this minor revolution in footwear was about to coincide with a major revolution in youth culture.

Griggs anglicized the name, made a few minor modifications to the shape but more significantly stitched the welt with a distinctive yellow thread and trademarked the name ‘Air-Wair’. At launch, the utilitarian Doctor Martens work boot was given a number, not a name, 1460, representing the launch date, April 1st, 1960.

The 1460 was soon adopted by those who used their feet for a living, such as postal staff, the police and factory workers but it was the `60s music revolution that catapulted Martens into the mainstream.

While the Beatles and the Rolling Stones were primping around in slightly un-manly Cuban-heeled stage boots from a London theatrical supplier, Pete Townsend, lead guitarist of the altogether more butch cult group The Who, and who expended considerable energy smashing hell out of his Gibson Les Pauls, went for the added ‘toe-tection’ of Doc Martens.

Townsend’s patronage eventually led to perhaps the ultimate tribute to DMs when Elton John appeared in Tommy, the film of The Who’s rock opera, wearing a massively oversize four-feet-high pair of cherry reds.

DMs became de-riguer for the skinheads, kissing cousins of the Mods, proudly working class and mainly from East-London. Although their adopted style of dress was an anti-fashion statement as it grew in popularity it inevitably created its own fashion trend, increasing the popularity of DMs.

But then the racially tolerant ska-loving skinheads in their faded Levis and Doc Martens metamorphosed into the even more closely cropped, tight jeaned, 14-eyelet DM wielding ‘skins’ of National Front persuasion – fashion had turned Fascist. Ironically DMs had by that time become standard issue for the police, who spent much of their time keeping the ‘skins’ in check and avoiding the odd kick from an opposing DM.

It was good for business, though, as it seemed that every teenager in Britain of either sex who wanted to show a little rebellious streak and confuse their parents with a bit of ‘attitude’ bought a pair of DMs. Music continued to give Dr Martens their upward momentum, the popularity of Punk and Grunge dramatically increasing the market for DMs. By the 1990s DMs had became so ubiquitous that even ‘nice’ middle-class schoolgirls were wearing them, but suddenly they were so ‘in’ they were ‘out’. Sales crashed, bringing the company to the edge of bankruptcy and AirWair bowed to the inevitable and in 2003 to keep costs down closed their British factories and moved production to China and Thailand.

However, hardcore DM fans seeking absolute authenticity and historical accuracy can still ‘Buy British’. Production of a limited number of styles, including the classic 1460, eventually recommenced in the original Wollaston Cobbs Lane factory where they were first made in 1960. 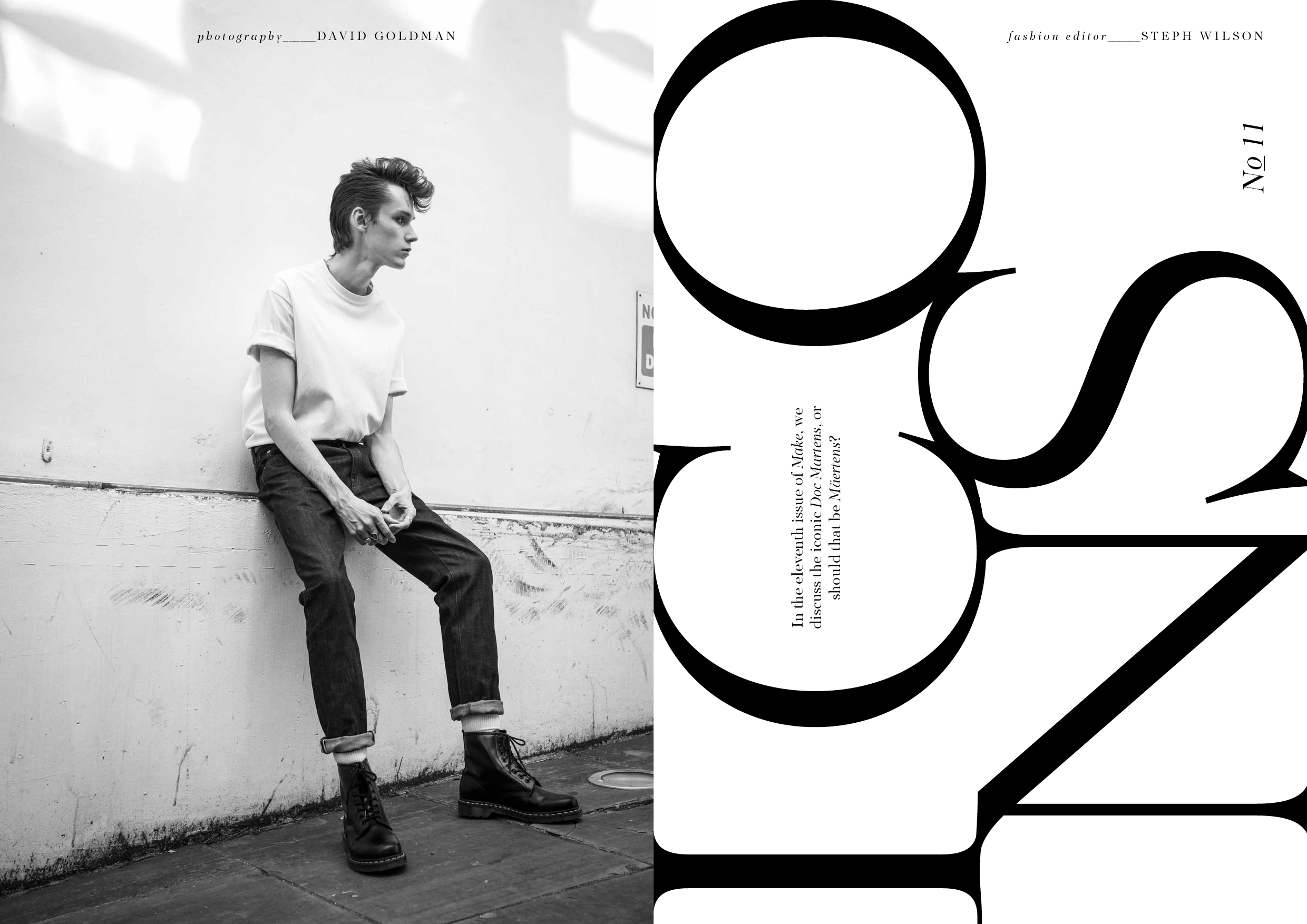 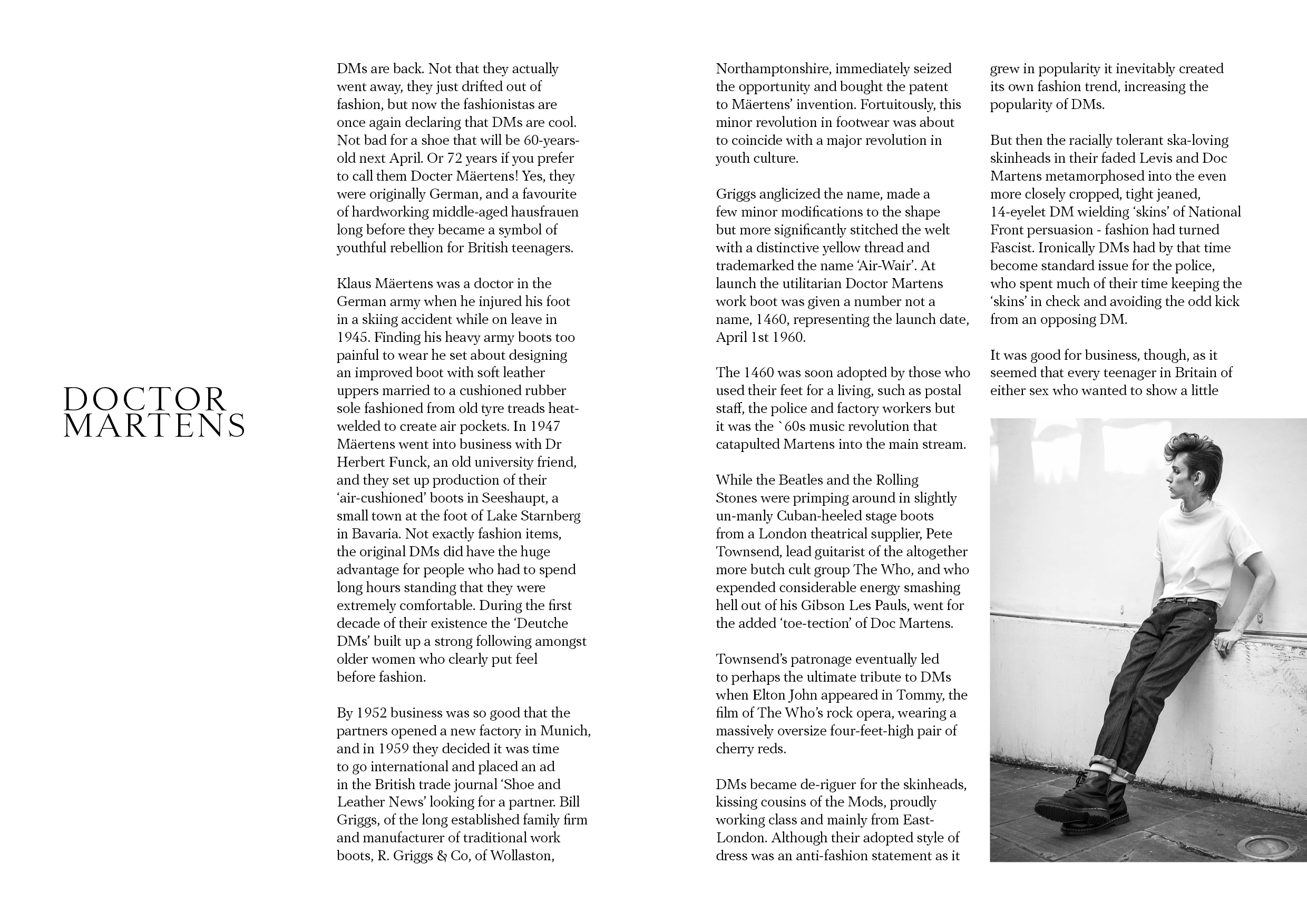 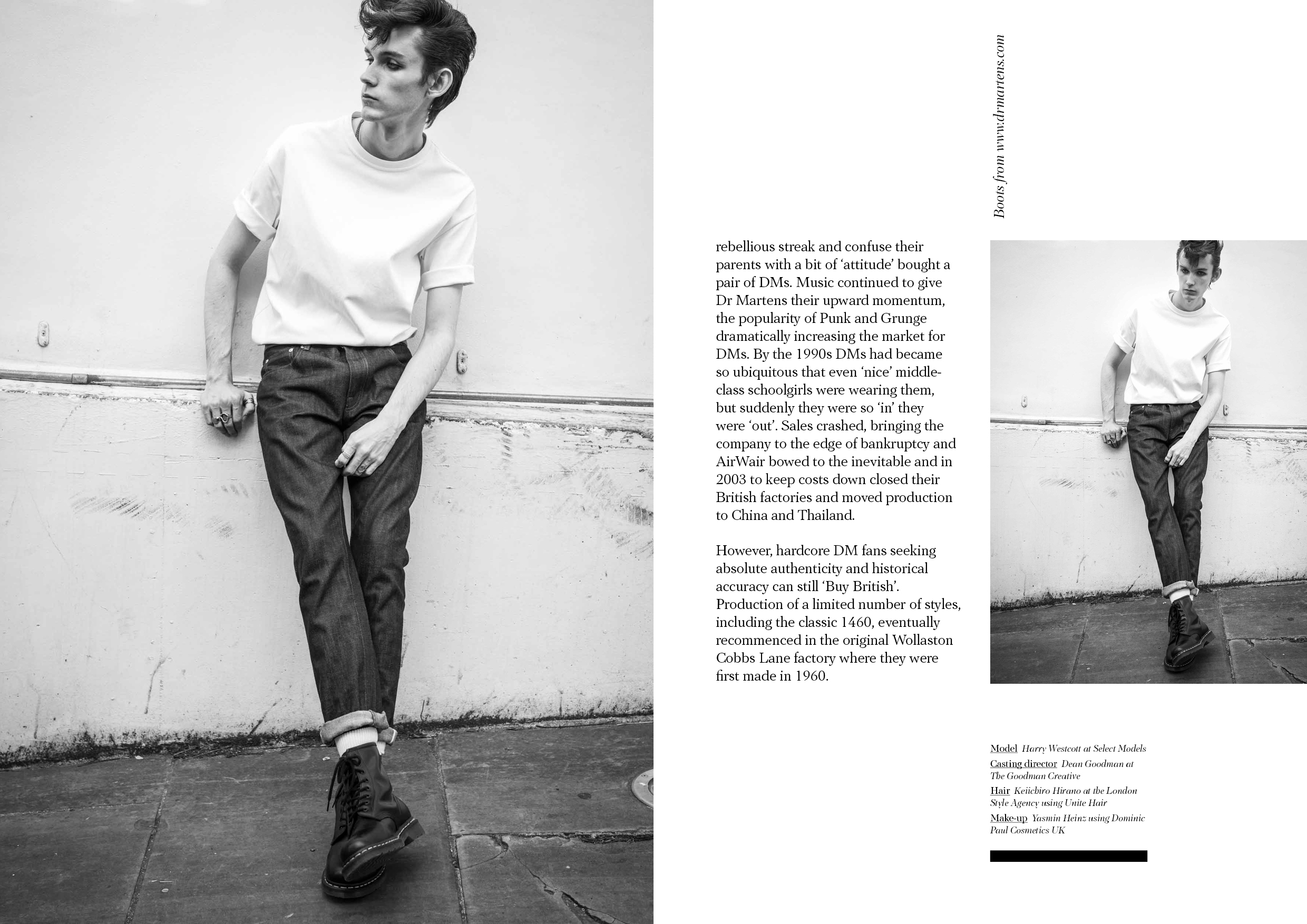