Words and photography by David Reiss

We go on a spontaneous adventure to Ethiopia with fashion and travel photographer, David Reiss.

I was sitting on the couch after a lazy New Year’s Day last year and when an article popped up on my news feed:  Timket: An Ethiopian Epiphany: a yearly Christian Orthodox ceremony, one of the most important held all over Ethiopia on the 19th of January, a ritual celebrating the baptism of Jesus in the Jordan River.  I thought, why not!  I’d never been to Ethiopia, but it was a country that always fascinated me the important religious festival looked like it would be incredible to photograph and I felt a day or two in sunny Northeast African 30 Celsius would definitely beat the London post-Christmas blues. I booked my tickets and not long after I was on a plane to Addis Ababa.

From the research that I’d attempted, one of the best places to experience one of the largest celebrations of Timket is located in one of the ancient capitals of the Ethiopian Solomonic Empire, Gondar, in the North of the country.  After a days drive from Addis, I arrived in Gondar and met my local guide, Aman.  I was taken around the city for the few days prior to the main event, visiting the various museums and castles that represented the kingdoms that once held power in the region including a trip into the surrounding Simien Mountains National Park.  But of course, my main focus was on the 18th of January and I was set for action.

In the lead up to the day, the city grinds to a halt, with the main streets cleared of main traffic.  The day before Timket, each of the main churches in the city, make a procession known as, the ‘Procession of Tabots’. The Tabots are the holy replicas of the Ark of the Covenant, the sacred chests described in the Book of Exodus as carrying the stone tablets on which the 10 Commandments were written.  Each church has its Tabot wrapped in cloth and placed on the head of its chief priest.  He is followed by the clergy, holy men and women and then the hundreds of worshippers of that church.  The long crowd of each parade winds down the streets in Gondar, eventually combining to form one huge processional wave down the main road.  They are joined by tens of thousands of locals and people from across the country including groups of dancers, musicians, singers, monks, priests and worshippers, all carrying floats and flags.

The sacred clergy, specifically the group surrounding the Tabots are whisked down the street, as large red carpets are rolled out in front of them: the holy of the holy can never touch the bare earth.  Everyone’s destination is a building compound structure in the South of Gondar, a ‘stone bath’, held in large walled garden.  The bath has a small castle-like building in its centre where the Tabots are transported with only the head priests allowed in via a narrow bridge while the numerous onlookers cram for space and strain to see the Tabots.  By this time, it is dark and the many devoted, including whole families, dressed in white start lighting wicker candles and quietly chant and pray in the garden, surrounded by ancient fig trees.  Hundreds stay all night, but the majority (including myself) headed home to rest for the main day ahead.

On the morning of Timket, I returned to the ‘stone bath’, where priests had remained the night, reciting prayers.  I arrived at three am in order to get a good enough vantage of the main pool. The bath and its surrounding platform within the bordering walls are reserved purely for holy men, monks and priests, so the onlookers crowd behind and on the perimeter wall and young children climbed up the tall fig trees for a better view.  The platform, slowly filled up with lines of clergy, all dressed in white as the crowd grew in the garden behind.  The dark night sky slowly changed to a pale blue and warm morning sunlight illuminated the bath.

At this point, the head priest makes his way out of central structure, holding a large and ornate gold cross.  He spoke to the congregation, giving a passionate and lengthy sermon, culminating in dipping the cross into the pool, to purify the waters, the symbolic baptism is now complete.  The surrounding priests then started to splash water onto themselves, one even had a hose, so as to spew the holy water onto crowd on the walls. I was thankful at this point that I had remembered to bring some plastic bags to cover my cameras.

Many of the men in the crowd started to undress, stripping down to shorts and underwear and a sense of excitement was palpable and clearly shown on the faces of the crowd. After a few more words from the head priest, the clergy began to leave. This is the moment they have been waiting for, for all of a sudden, the crowd (mostly young men) jumped over the walls, screaming with joy as they rushed to the pool to jump into the water.  I quickly jumped down from the wall and headed to the rim of the platform, as the crowd rushed from behind me and spilled around me. The water was thrown everywhere and crowd were quite wild with excitement with various groups of youths are pushing past me to get in the pool until the it is overflowing with swimmers.

Plastic water bottles were filled with the pool’s holy waters and passed to people on the bordering wall to be thrown out in to the garden crowd.  As more and more bodies piled in, I felt my luck might run out and I too would fall into the water, so I slowly found route out into the garden.  The garden is where the singing and dancing starts. The priests form lines and the Tabots file out in a procession to return the Holy arcs to their designated churches.  The priests take turns to dance in front of the procession in lined formations, accompanied by drums and hand held cymbals.  The worshippers followed them behind, celebrating as they had done the day before. Another wave of people, that swept me up in their throng, on to the road. The joyous cacophony infectious: everyone was open jawed as they sang or laughed.

At the centre of Gondar is a large circular roundabout surrounded by concrete Italian inspired old buildings (remnants from its colonial past) and this is where the parade starts to split, each Tabot group continuing own its own way, singing and dancing back to its origin.  At this point, I took a breath and I saw an empty chair in a small coffee stall on the side street where I sat and watching the rolling ceremony of white clothed revellers, while groups of elderly locals sat around me, gossiping and pointing at various people in the crowd.

It definitely created a moment of reflection for me. An article read by chance only a few weeks earlier, one lazy afternoon at home had led me to Ethiopia to witness and experience an extraordinary display of both spiritual purification and community celebration. It made me notice both how small the world is, but how infinite too. 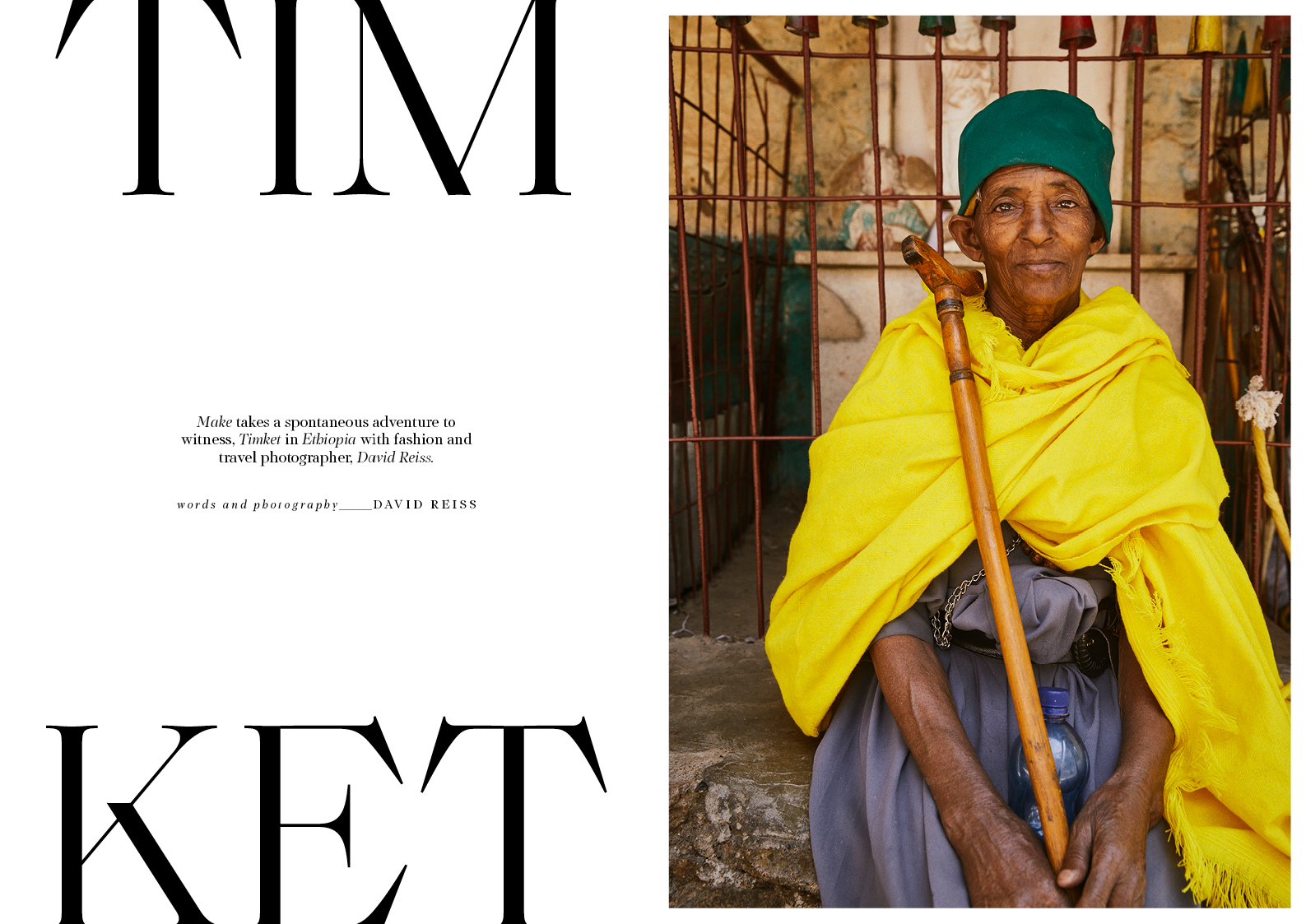 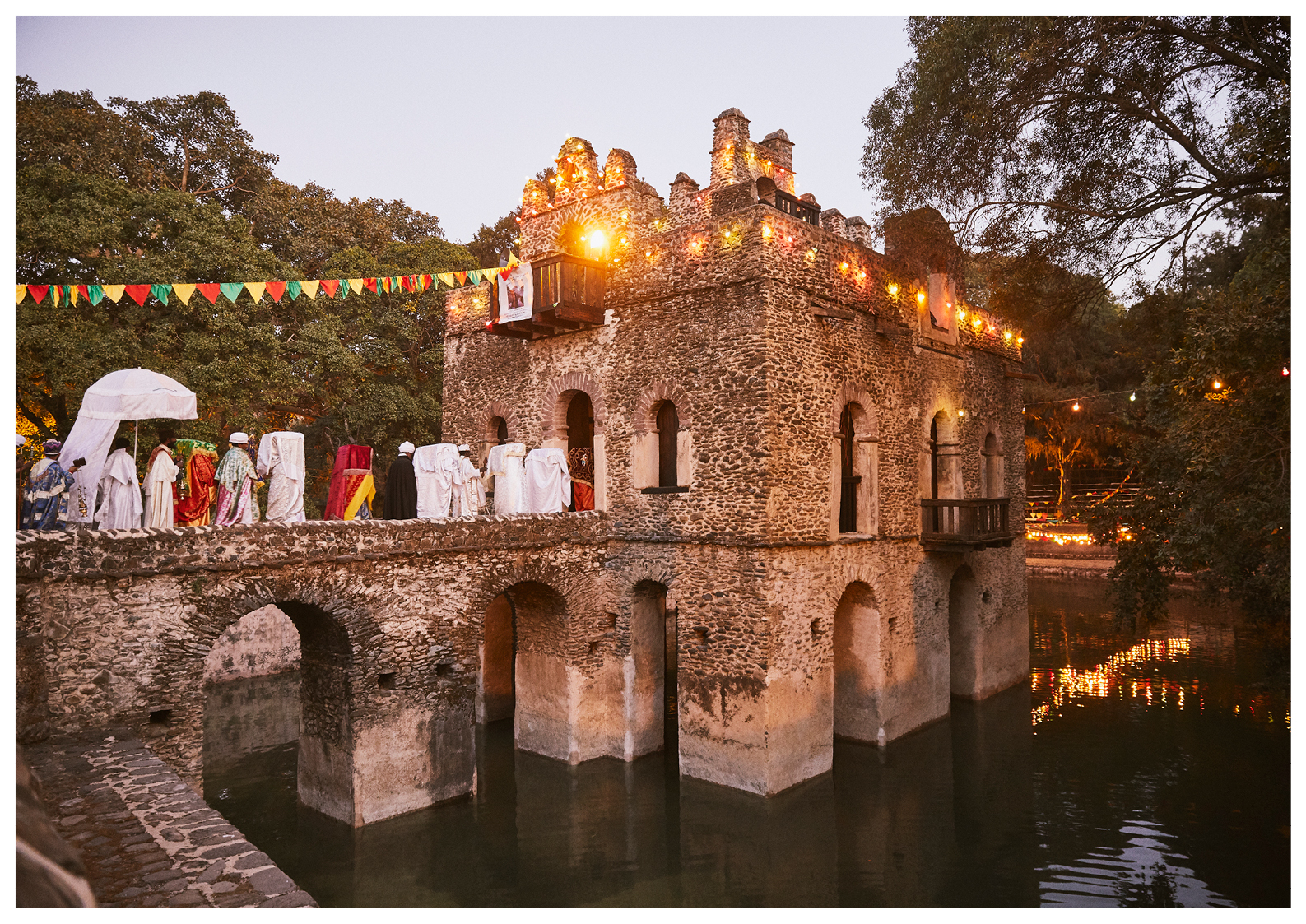 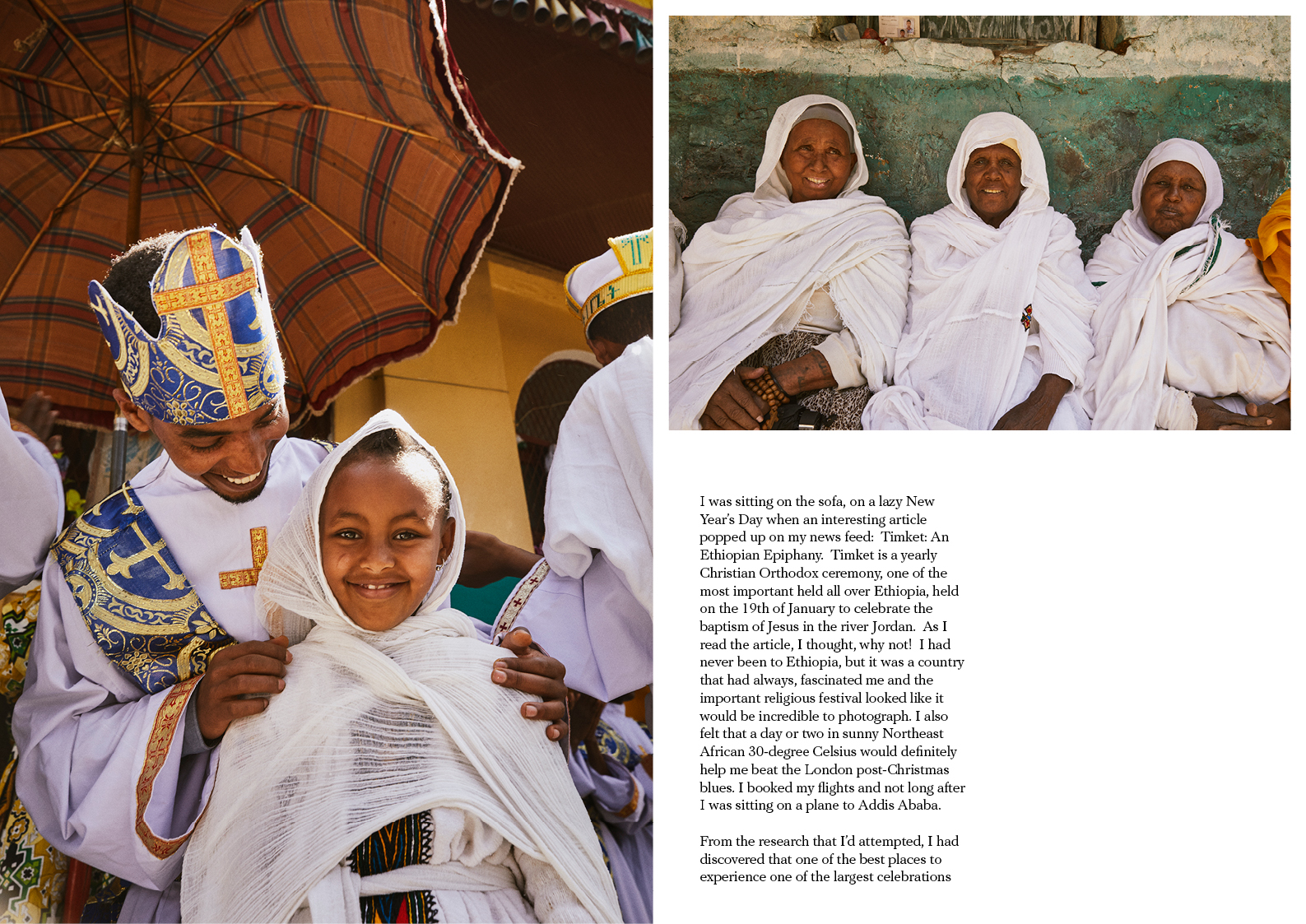 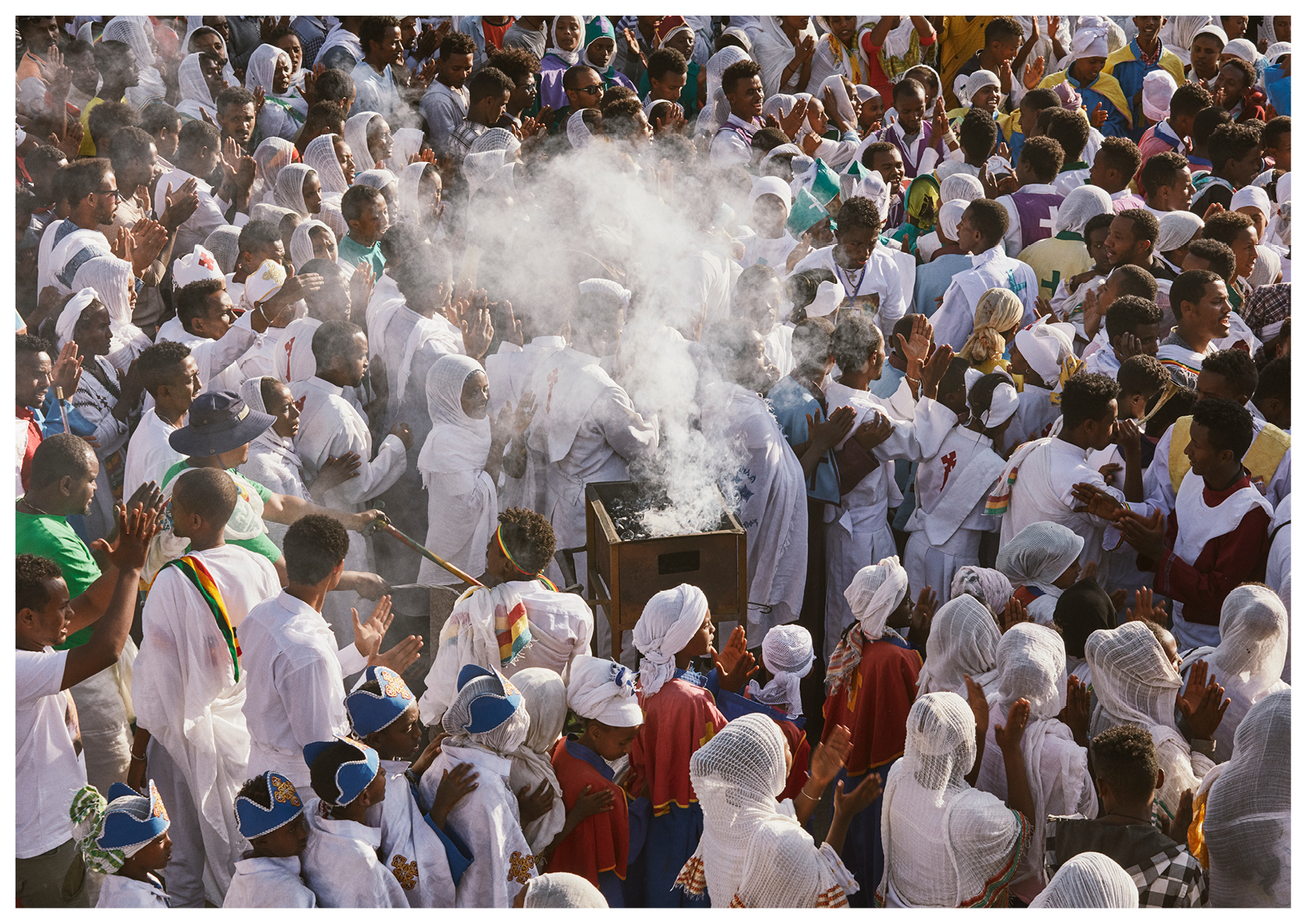 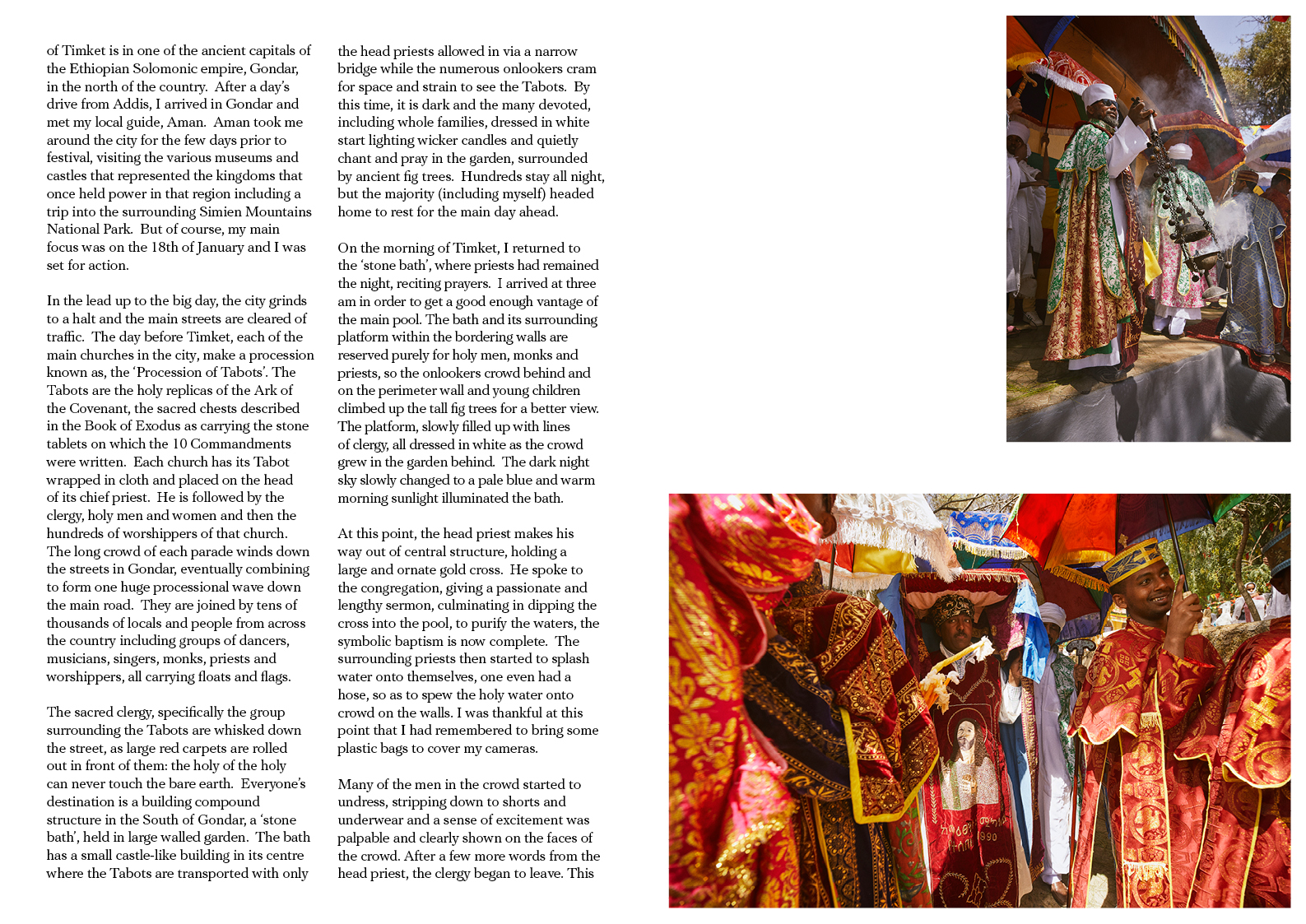 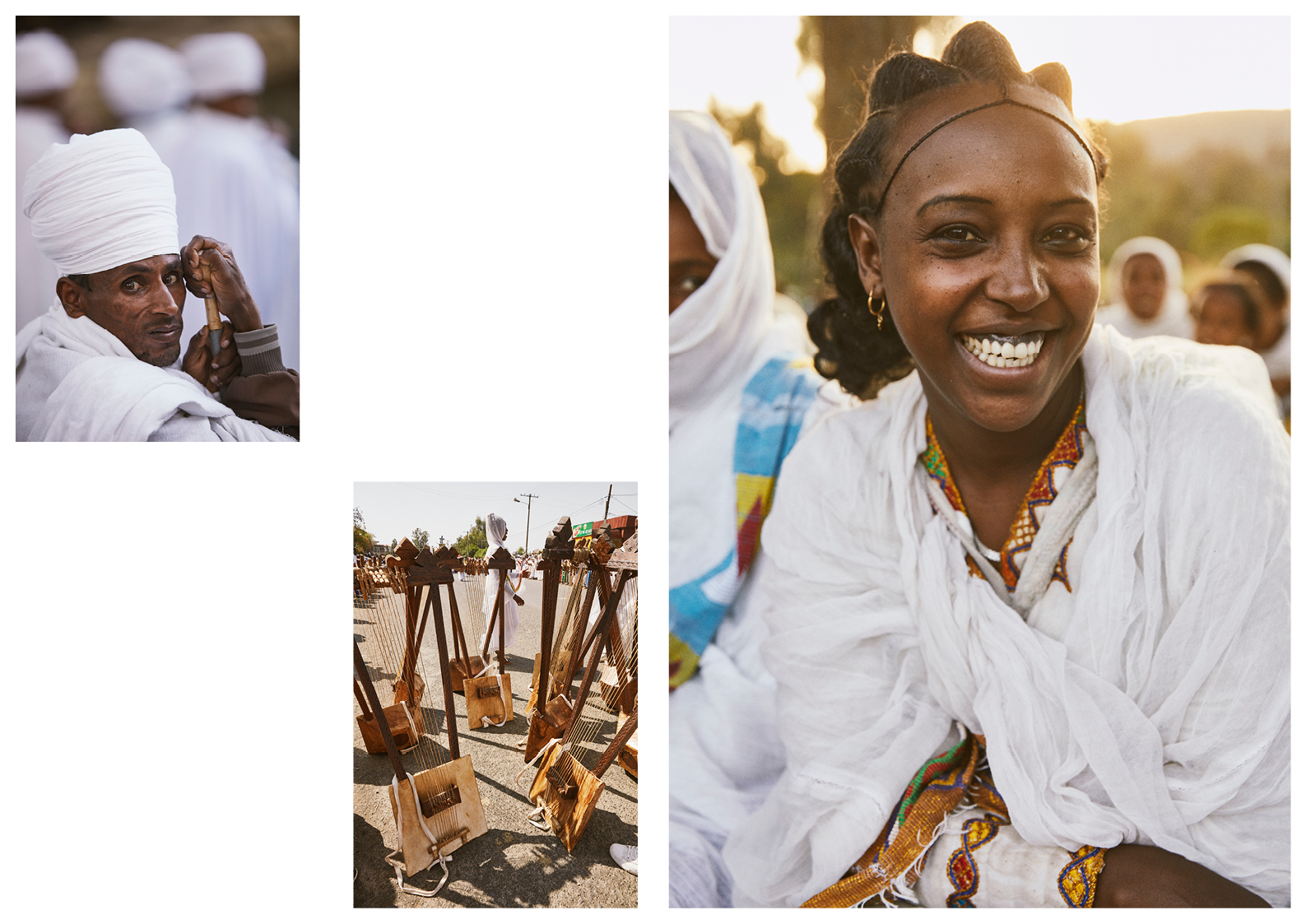 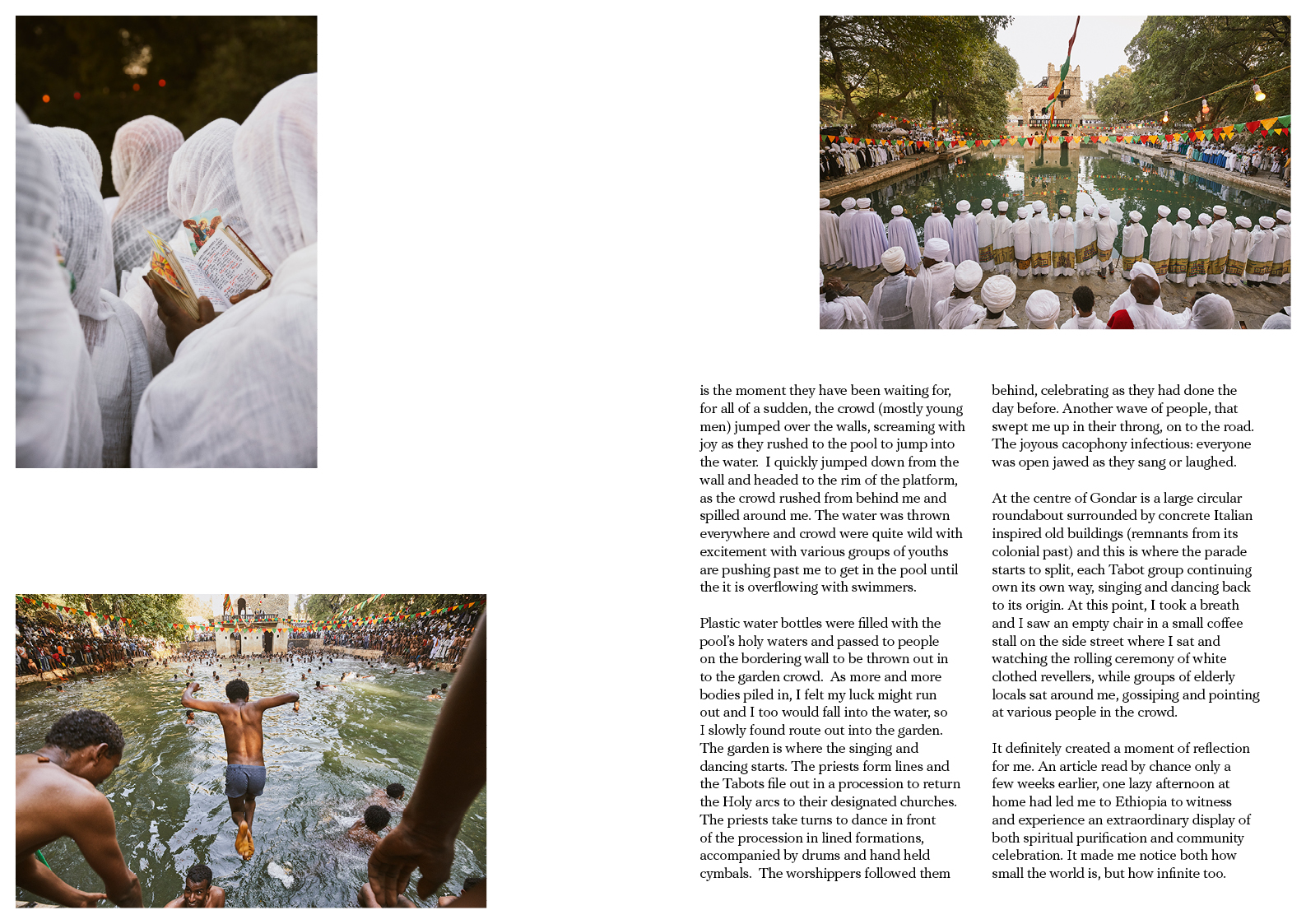 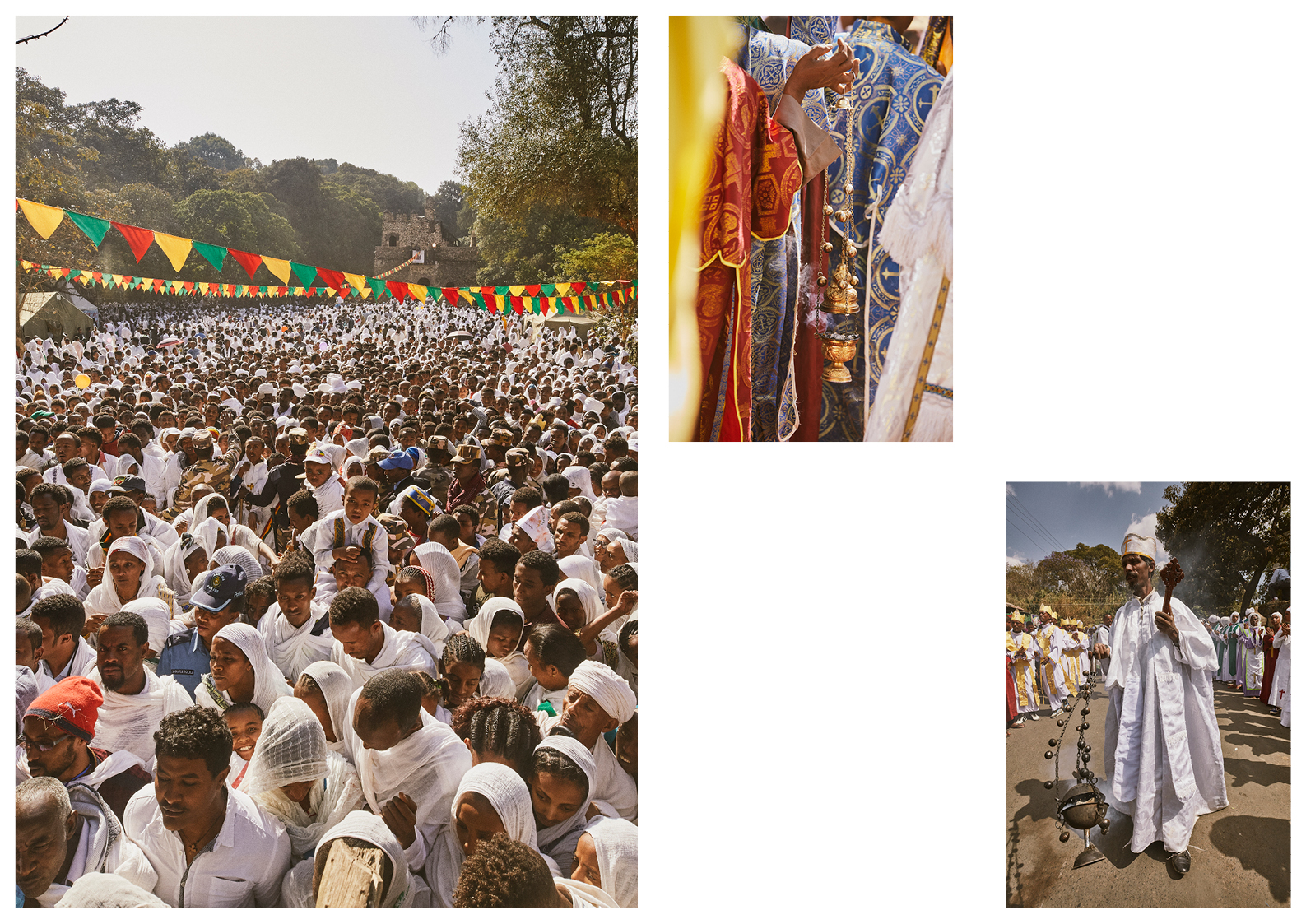 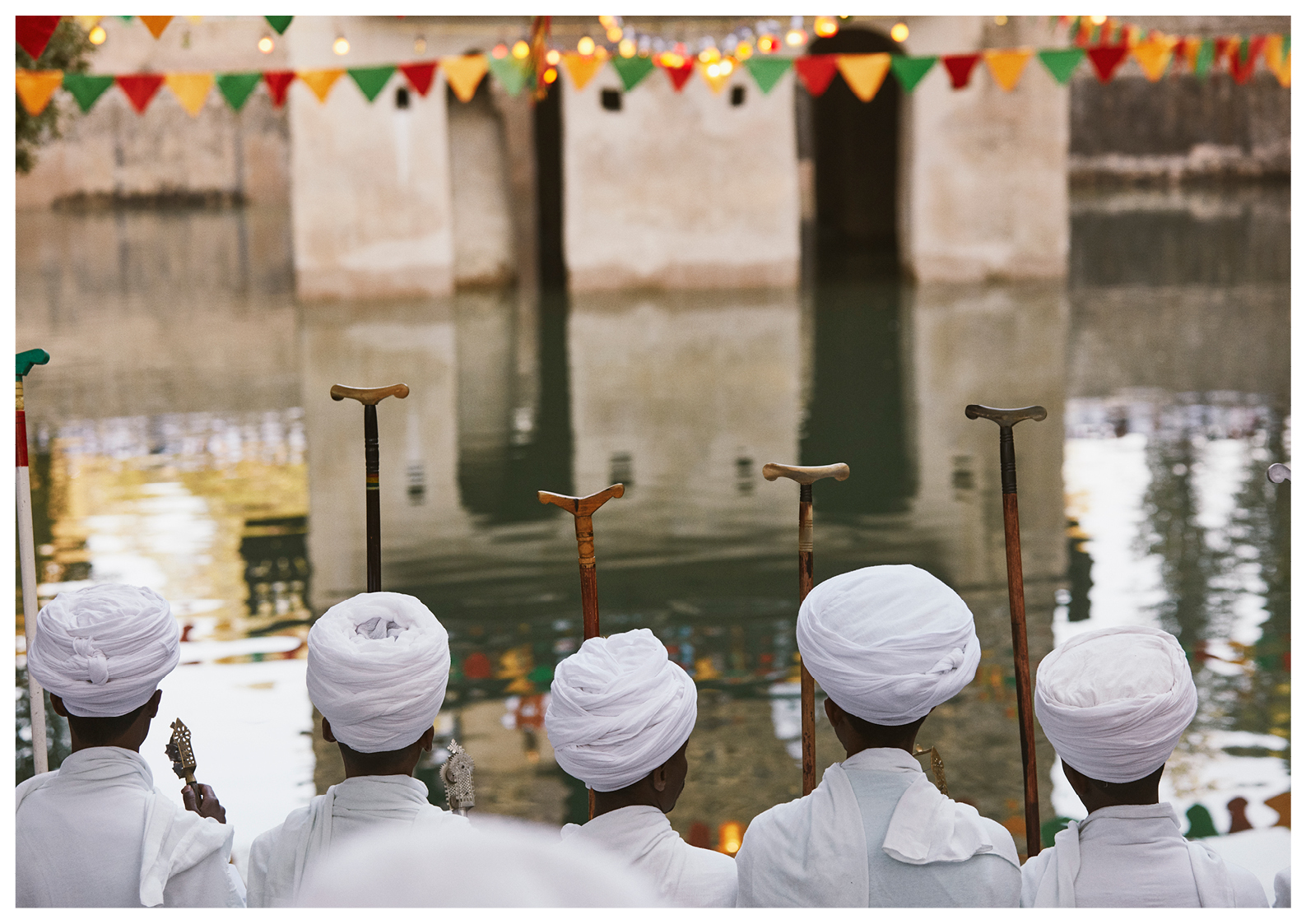