Make sits down for a chat with Alice Eve to talk about her new role in the ‘new Downton Abbey’ and to find out what makes her tick.

Alice Eve is discussing, with some vehemence, a woman’s right to be difficult. Her character in ITV’s upcoming period drama Belgravia, Susan Trenchard, is a merchant’s daughter-in-law and the kind of calculated social climber that traditional audiences love to hate. Within two minutes of our phone conversation, she’s mounted a defence on her behalf – ‘Heaven forfend that a woman is unlikeable!’ – and dived into gender politics to root out the reason women are expected to be the more amenable sex. ‘We’re the ones [who] make people inside us. We have to believe in the goodness in people.’

This sentence sums up the 38-year-old. Her conversation is both wide-ranging, with references that include Emmeline Pankhurst, Ingmar Bergman and Miuccia Prada, and delivered with charming frankness. She’s quick to point out that her own trajectory towards womanhood has been one of learning not to appease other people. ‘I think that most of the growth I’ve done to become a woman, which I am now, like it or not – sometimes it comes upon you, doesn’t it? – is to say no and to displease people in order to serve myself.’ For Eve, womanhood, and negotiating the complexities it brings, is something that constantly needs work. ‘Being a woman is an art. It’s finesse. It requires so many things, so much consideration.’

Of all the women in Belgravia, which marks Julian Fellowes’s return to television after Downton Abbey, Susan is one of the most interesting vessels to inhabit. She’s a modern woman in a period piece, as Eve puts it, and subject to downstairs tattlings – ‘You’d think she was an infanta of Spain with all her airs and graces’ – as well as being far from a favourite with her in-laws.

The storyline follows the middle-class Trenchards and the aristocratic family to whom they are bound by a decades-old secret that begins on the eve of the Battle of Waterloo in 1815. It marks a return to form for Fellowes, the master of making period dramas not just watchable, but relevant for audiences today. ‘I think what we get from them is comfort,’ says Eve. ‘The relentlessness of news is hard to assimilate for any human mind – and the speed at which we move. To have something that’s contained and controlled is necessary for psychological health.’

The pace of life in the 19th century might have been marginally less frantic, but the pressures Susan experiences – to make an appropriate marriage, to be a dutiful daughter-in-law, to elevate herself in society without appearing unscrupulous – are not so far removed from what women experience two centuries later. ‘The people I admire the most are women that I see navigating their pressures,’ says Eve.

On the subject of pressures, one that springs to mind was the decision to freeze her eggs in 2018. ‘I regretted not having a kid at 22. The body would have bounced back so easily, but I’m sure I wouldn’t have been a great mother.’ It’s a difficult subject because, as Eve says, some pressures, like the whirring of the biological clock, are both good and bad. ‘The choice of a child is an amazing privilege,’ she says. Clearly, Eve is an advocate for women choosing what to do with their own bodies. ‘I think it’s pretty necessary isn’t it?’

Another topical issue is the conviction of Harvey Weinstein. The guilty verdict hadn’t been delivered at the time of our conversation, but I’m anxious to know what Eve, as a woman who’s worked on sets since her early twenties, thinks of life as an actor post-#MeToo. Has there been a dramatic shift in culture? ‘No. There hasn’t been a change. All there’s been is an avenue of reporting,’ she answers, adding, ‘There’s now a path you can take in response to it, which didn’t exist before.’ This lack of change, she says, isn’t so much a disappointment as tantamount to the fact that it’s happening in real-time and is still something society as a whole is still working through. ‘I think the good thing that’s come out of all of this is that we’ve become more sensitive as a culture. I really try and wonder about what I’m going to say. I like that we’re able to have an honest conversation without it being controversial. I think that the lines of communication opening between women so that we can share the complicated territory of being a woman is incredible. I actually think it’s one of the great things to have come out of the last decade.’

Another is that audiences want to hear women’s stories. Although she’s worked solidly since the age of 22, kicking off with university rom-com Starter For Ten and graduating through to Black Mirror, Star Trek Into Darkness, Iron Fist and Bombshell, Eve’s noticed a difference between roles in her twenties and thirties. ‘The parts available in your twenties, and certainly in the time I was working, weren’t as complex as they get when you’re older. In turn with me growing up, I think that the stories we tell and the willingness we have to hear stories about complex women has increased,’ she says.

In Bombshell, which follows the watershed moment when women at Fox News made claims of sexual harassment against chairman and CEO Roger Ailes, Eve plays Fox & Friends host Ainsley Earhardt. She only worked a couple of days on set but says it was an important project to be part of. ‘The lifting of the lid on all of these secrets was revelatory. Certainly,

in America, it was sweeping the nation. They were making a film and it felt like an important story to tell to mark the time. I was glad to be part of it,’ she says. One senses that, in Eve’s eyes, a woman’s right to decide her own destiny is something we should not only see a lot more of on film but talk openly about too. ‘In order for us to be agents of our own health and futures, we must continue to ring the alarm as a collective.’

Hair by Halley Brisker at the Wall Group 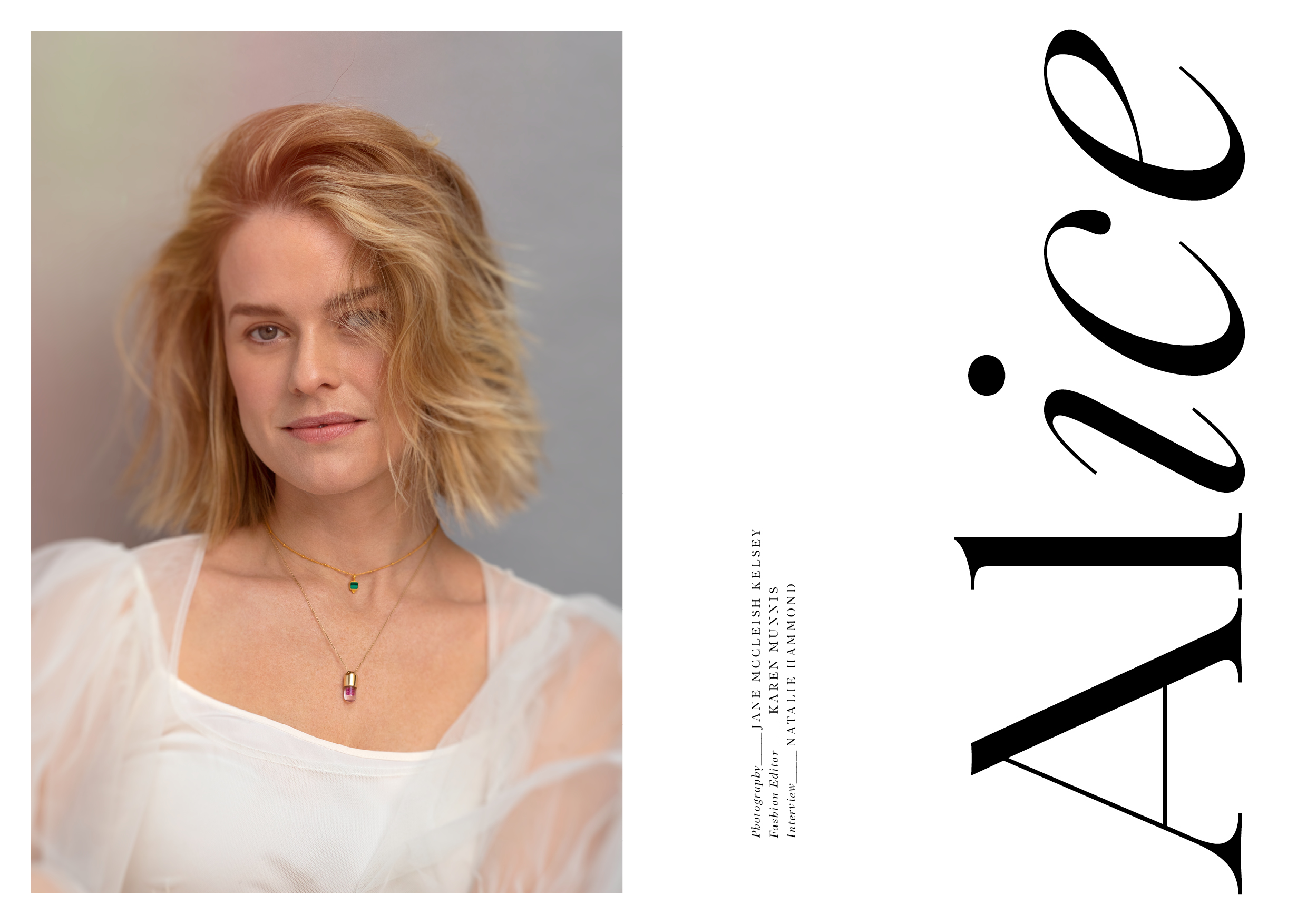 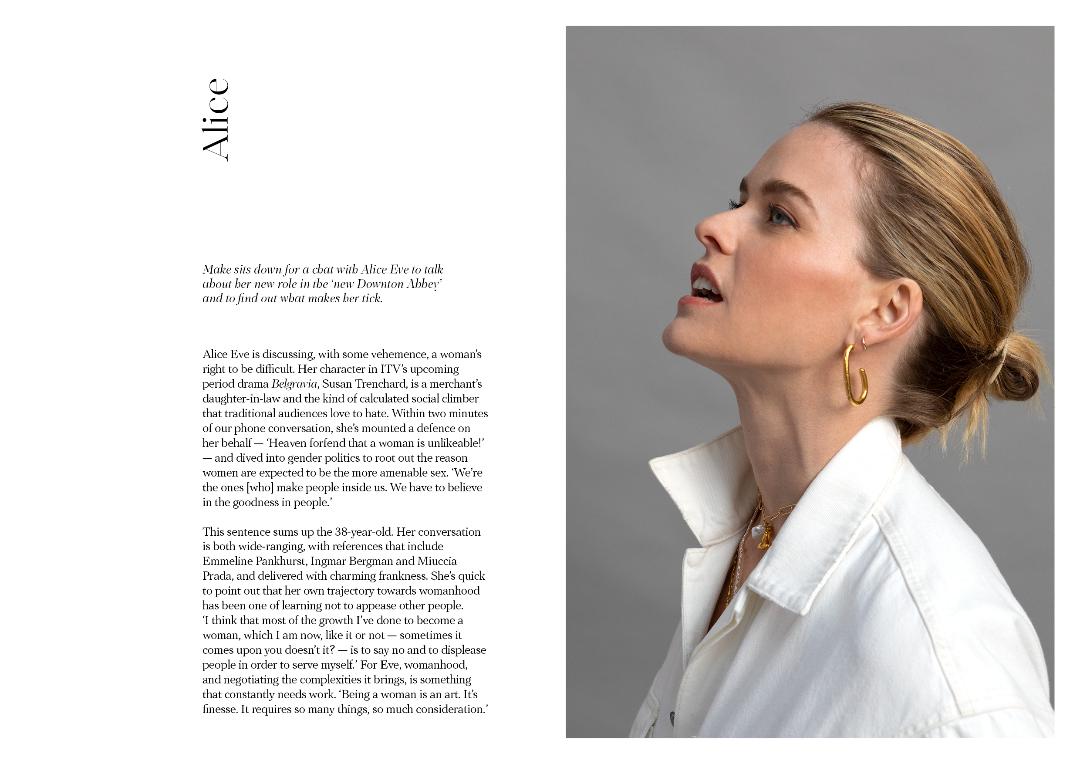 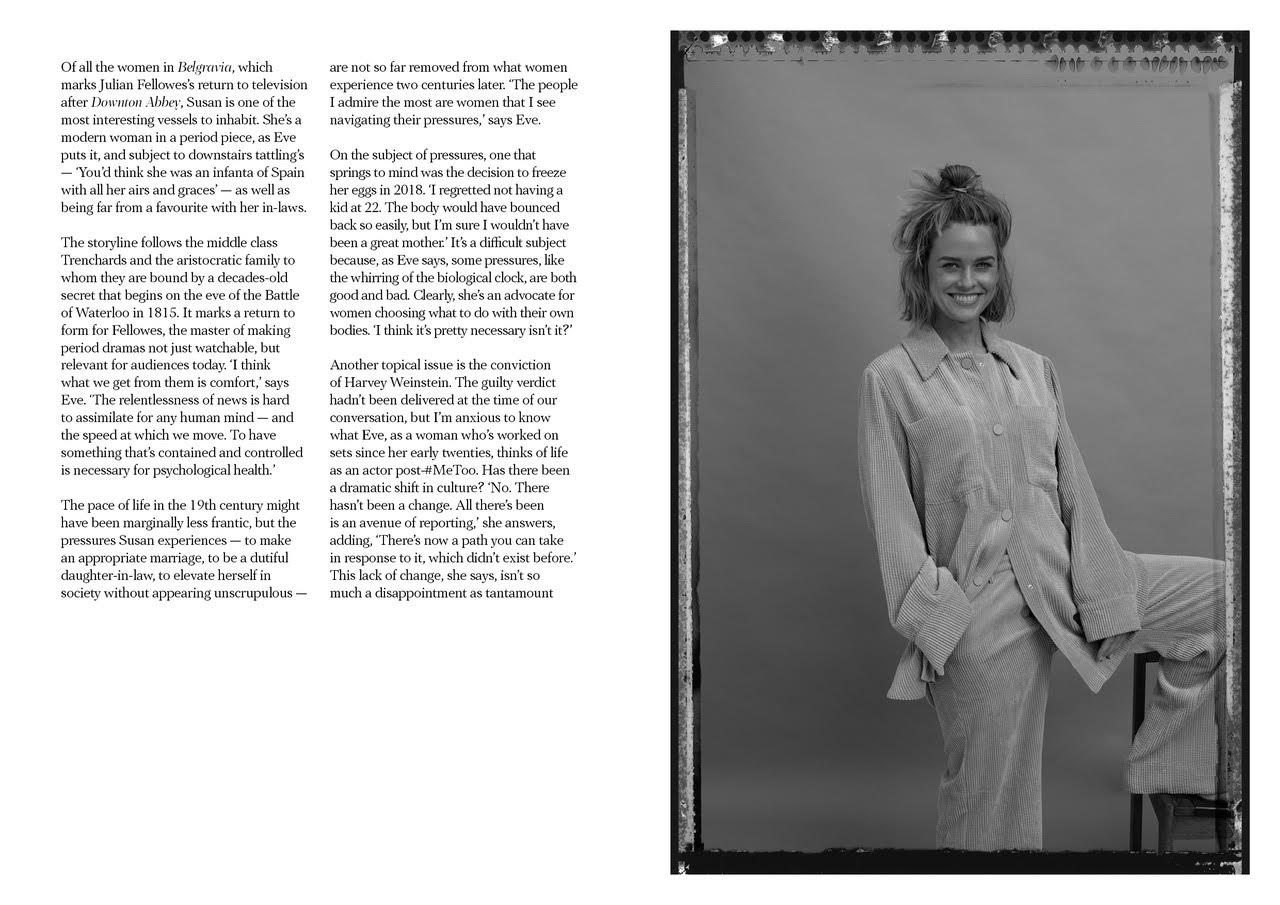 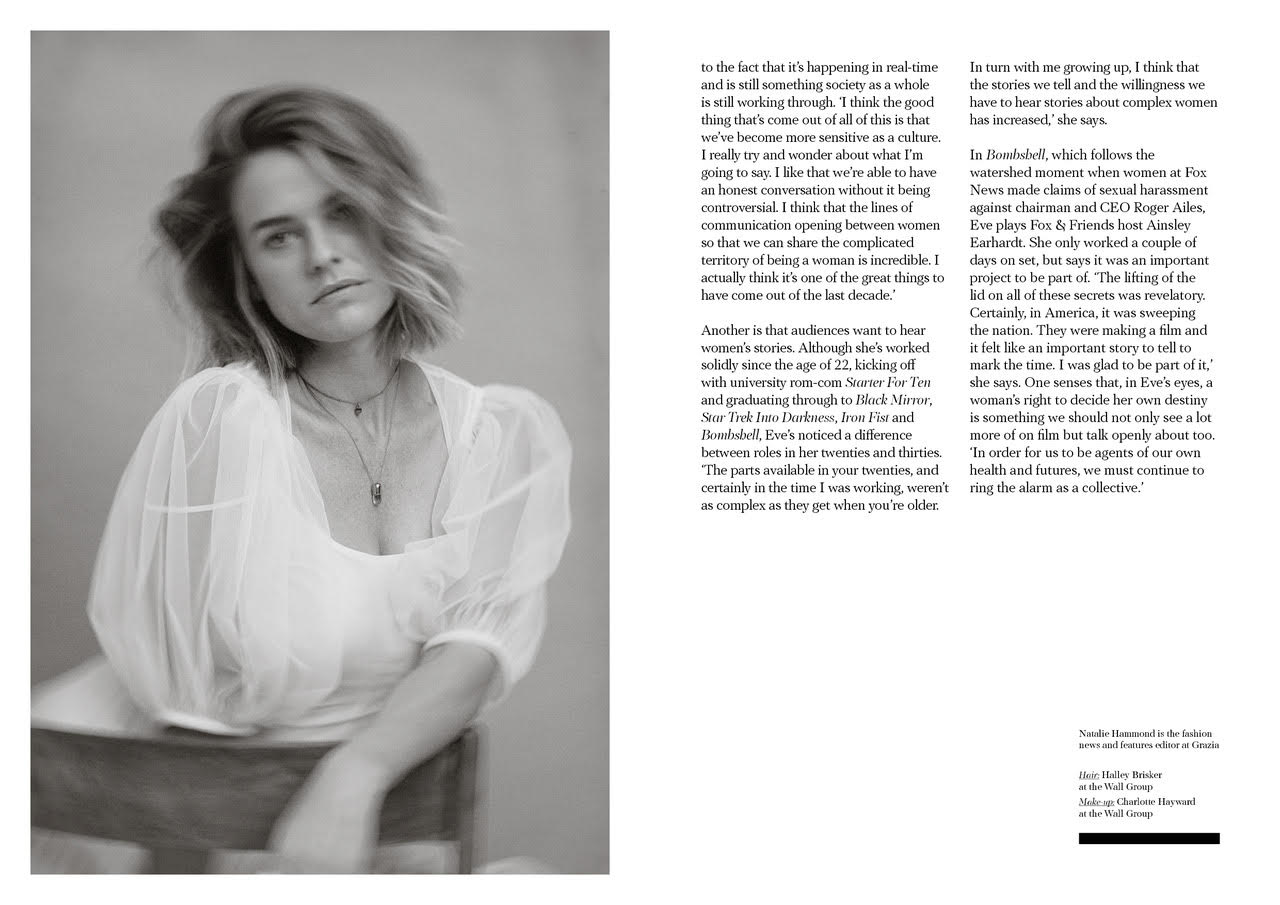