Tanzanian-born Rene Macdonald celebrates the courageous through her kaleidoscopically colourful label Lisou, but the clothes are not the only bold aspect of the designer’s vision.

Take a look through Lisou’s AW2020 collection and the word ‘bold’ easily comes to mind. The label’s unexpected and quirky contrasting patterns are printed on fluid, natural silk to create elegant, easy-to-wear silhouettes, beloved by the likes of Pheobe Waller-Bridge, Charlize Theron and Gwyneth Paltrow.

With a distinct disco vibe, creative director and founder Rene Macdonald, says that Lisou has at its heart the memories of her mother, a Tanzanian-born diplomat for the United Nations who, as a young girl, Rene would watch getting dressed for glamorous evening events. “I am hugely inspired by the bold graphics and silhouettes of the 70s, and also the glamour of the 30s,” she says, speaking over Zoom from her airy, light-filled studio in West London, not far from the label’s eponymous boutique in chichi Westbourne Grove. “The flowing chiffon gowns, the shoes, the accessories… everything was so over the top.”

Rene (pronounced ‘Re-knee’) was also taught to sew by her mother. ‘There were no shops where we lived so she made everything by looking through magazines. However, it wasn’t just a love of dressmaking that Rene inherited. A belief system rooted in helping disadvantaged people permeated through her upbringing too. “We lived all over East and Southern Africa for her family’s work. My mother regularly bought home people who couldn’t get funding for medical care through the official channels. I can remember several occasions when we had people staying in the spare room, recovering from bomb attacks.”

At the age of eight war broke out in Somalia, where the family were living. As a result, Rene was sent to school in the UK for safety “Every day sirens were going off, airports were blown up and political coups became the norm.” By the time she arrived at boarding school (‘Imagine,’ she says, ‘I’d never even eaten mashed potato before or ever been cold!’), a sense of purpose was sewn into Rene’s soul. Spending her early years witnessing the effects of war on a community, with her parent’s work for charitable causes as inspiration, clearly imprinted a sense of ‘right’ in Rene.

As a result, Lisou currently donates all proceeds from one item per collection to Lisou’s LIFE Trust, which provides grants to Tanzanian communities for education and medical needs. Closer to home, Lisou runs a competition in partnership with local state secondary schools in West London, which allows students the chance of having their creations designed, produced and sold with the proceeds gifted back directly into the school’s creative departments.

Rene insists that it is the moral duty of successful fashion designers to drive more diversity in the industry and the most immediately tangible way to do that is through mentoring. “Creativity is the marker of the society we live in. Middle class, and privately-educated, kids are exposed to creativity in a way that other children are not. There’s just not enough funding for music and arts in schools. If you are a child who is talented at music or design, how are you going to foster that with one hour teaching a week? The legacy is that cultural representation comes from a small slice of our society, and that small slice is writing our entire contemporary history.”

While Rene modestly says she doesn’t want to be dragged too far into the politics of the recent events around Black Lives Matter, she hopes that the spotlight on issues around diversity becomes a greater platform for positive action, rather than tokenism. “Way too often I am the only black person in the room (in business). I had a strong, successful mother but even she said to me, ‘You’re black and a woman, so you’ll have to work 100% harder than everyone else to be heard.’

Through mentoring, you can provide practical skills as well as inspiration. “You can’t bolt the door after you’ve got through. You have to give back, you need to inspire.” Maybe that is what truly courageous leaders are now. Across all industries, maybe success from now on will be judged on how much you give back, rather than how much you gain. That would be a bold move.

Hair by Christopher Sweeney at One Represents using Leonor Greyl 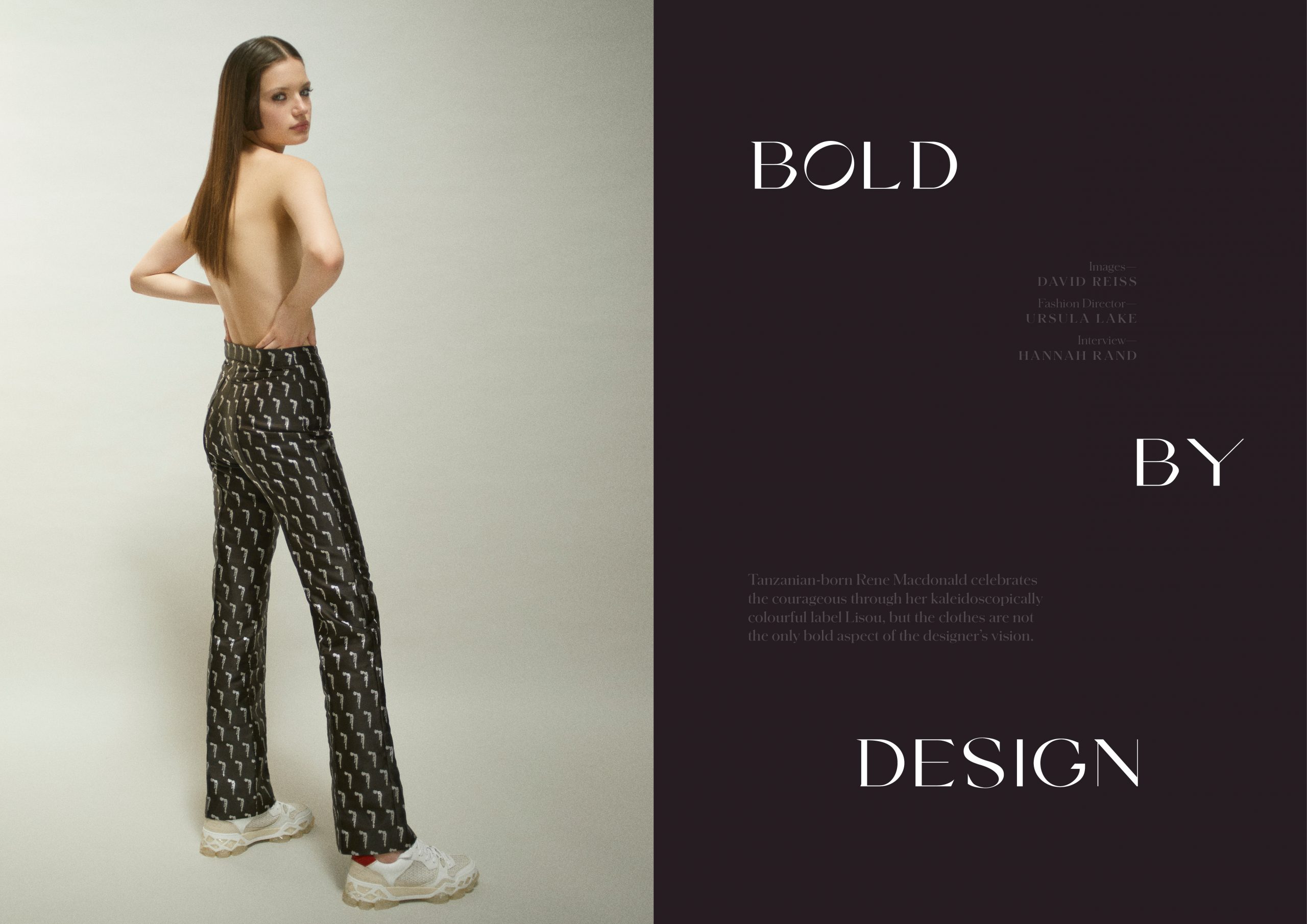 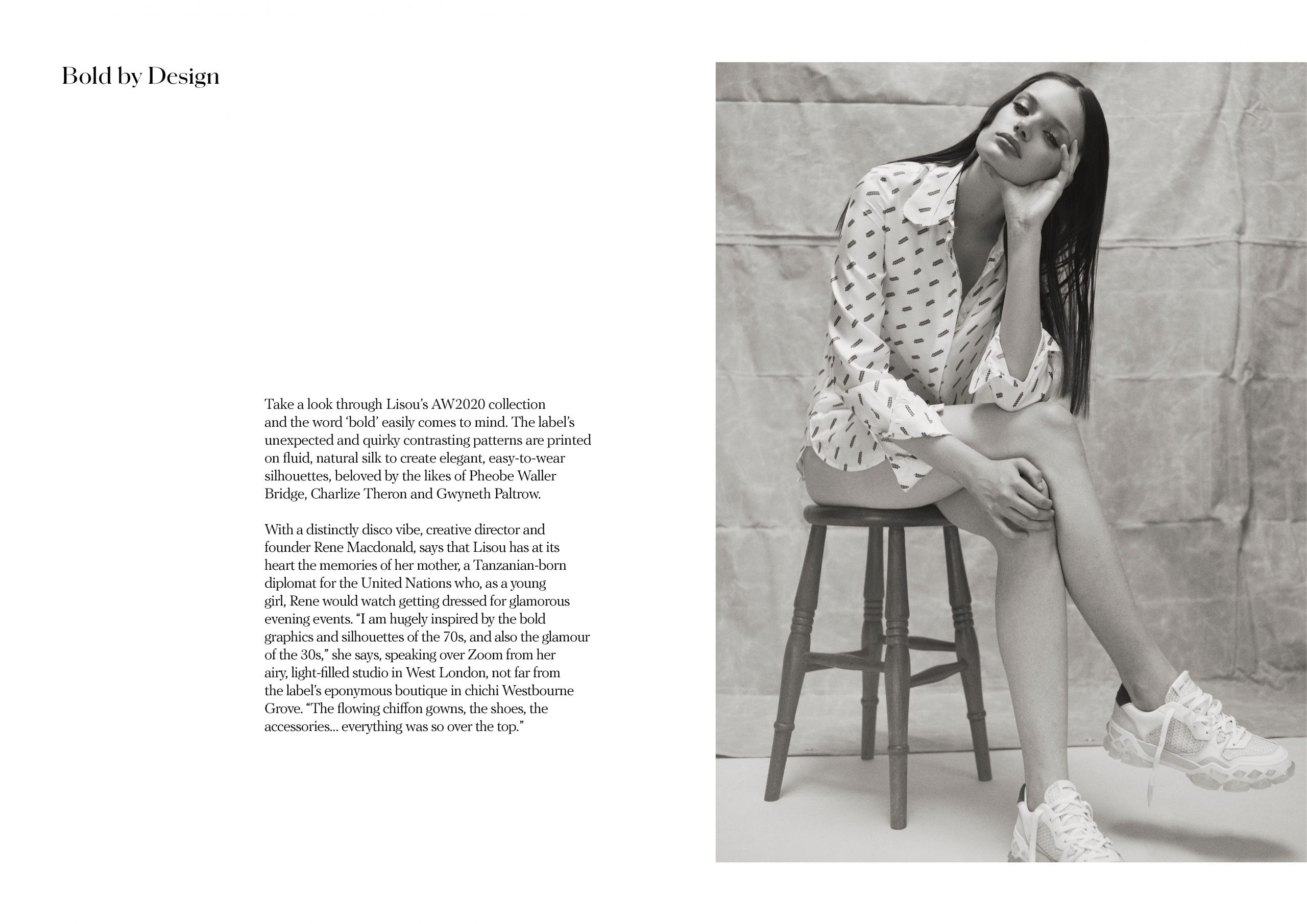 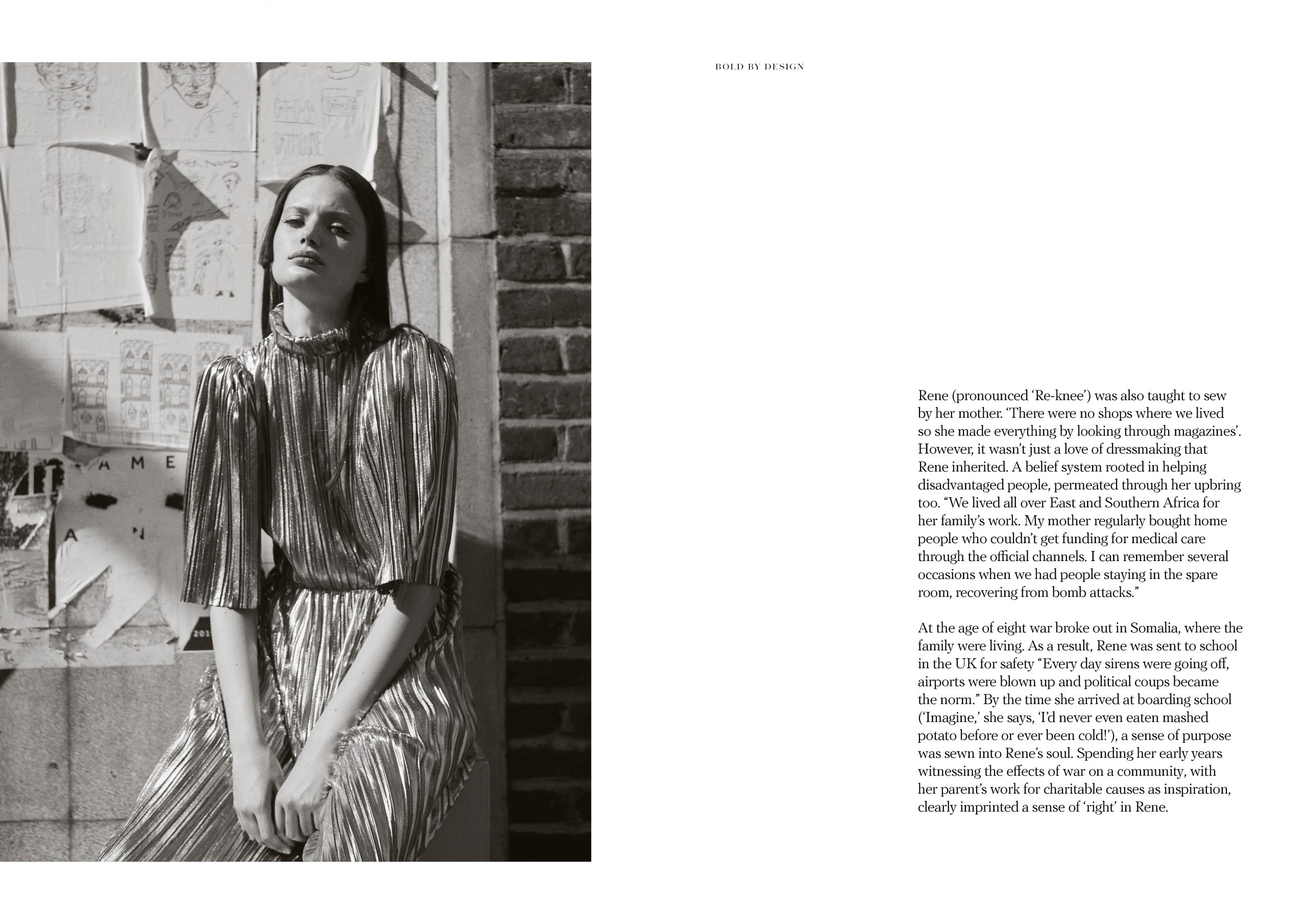 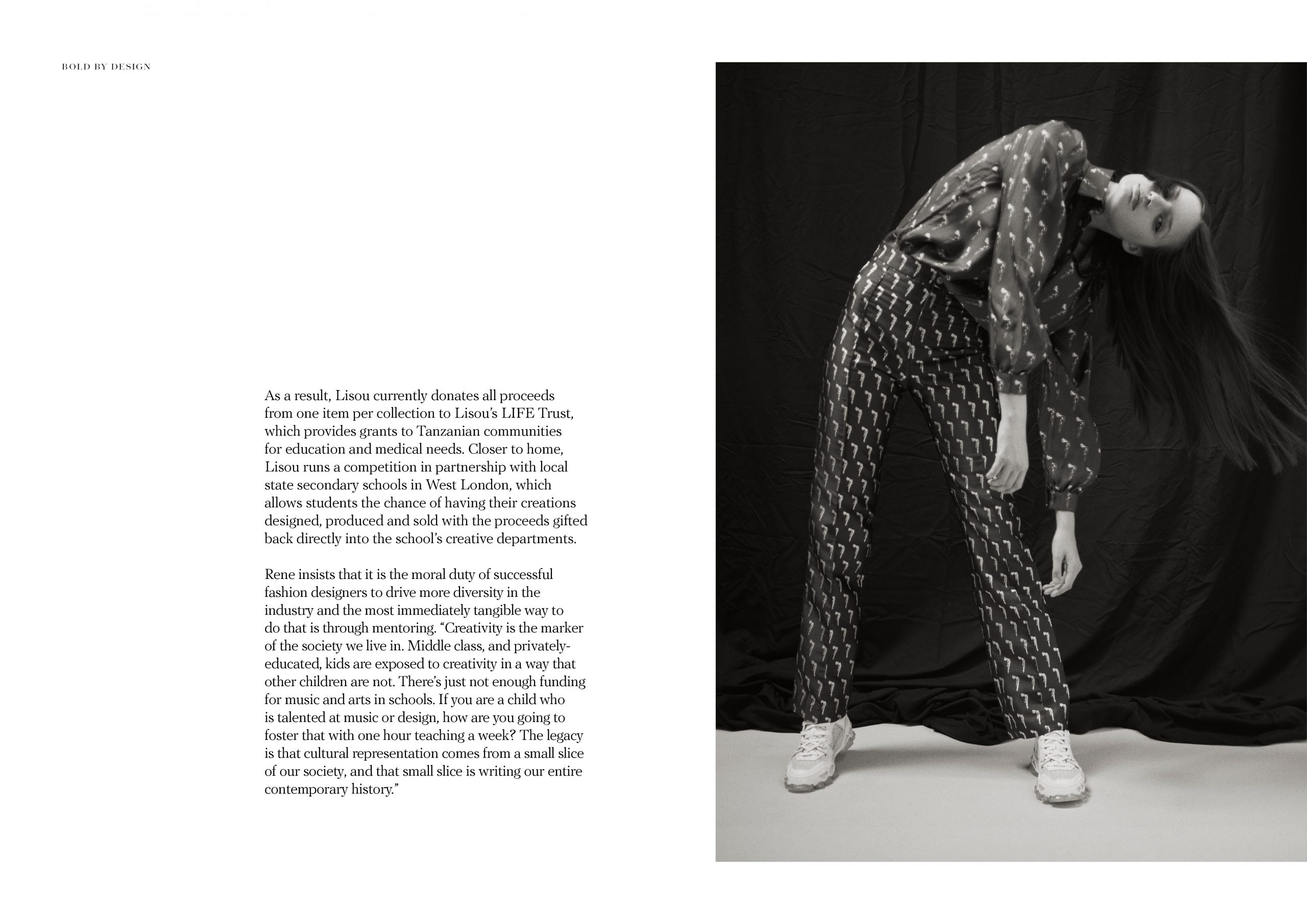 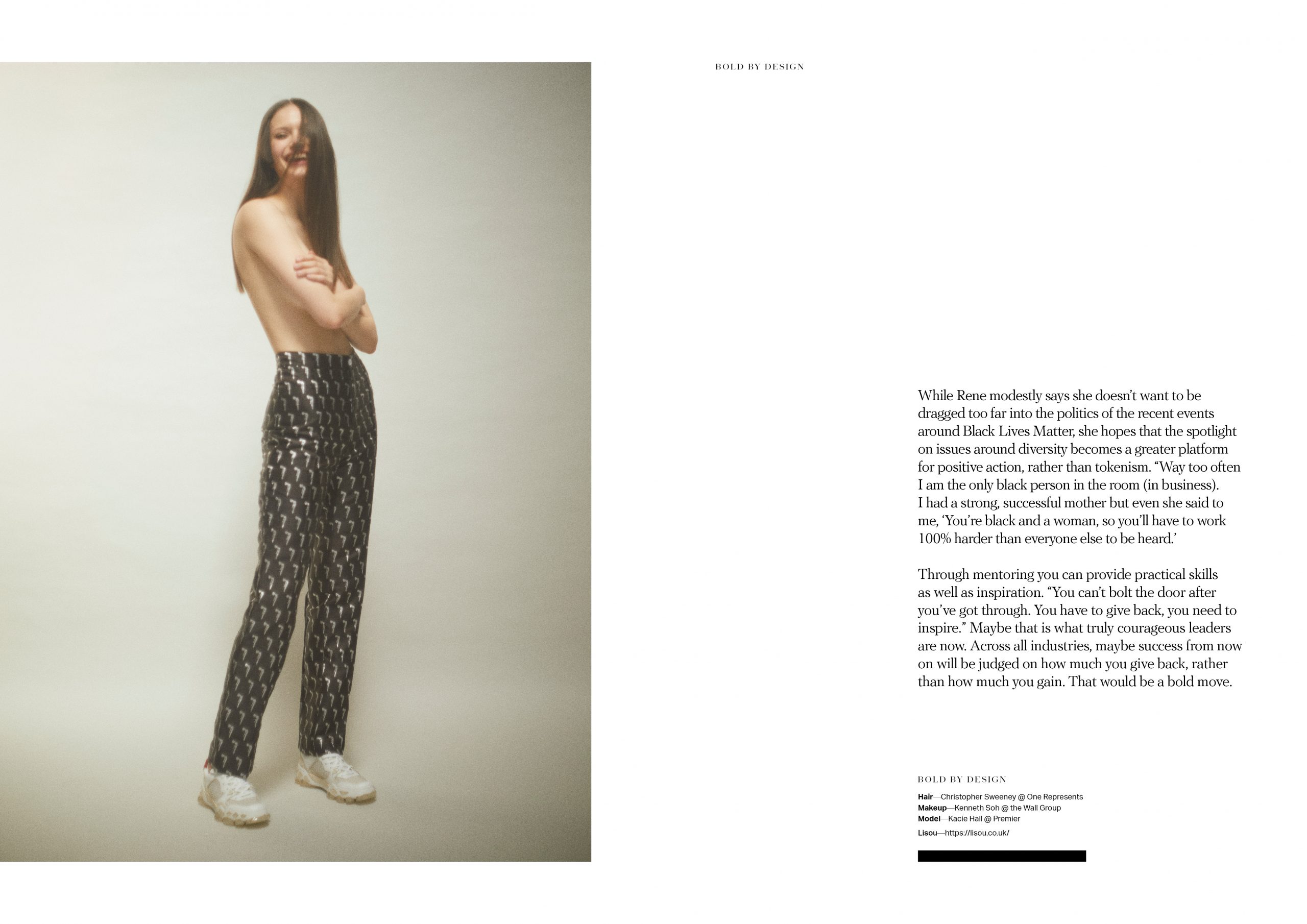