Make chats with actor Rose Leslie about her upcoming role in Death on the Nile, her lockdown experience and more.

Not many people can pull off a Stella McCartney floor-length silk frock and a fashion shoot when expecting a baby but Rose Leslie shows no sign of fatigue. Laughing with the crew during makeup prep, swapping lockdown stories and nodding with her gorgeous grin when everyone agrees that her Good Fight co-star Christine Barancski is utterly brilliant

Downing cups of tea, Rose is radiantly happy and excited, clearly loving the experience. It’s Rose’s first shoot in the UK for four years. She’s been away living in New York while filming the hit spin-off from the equally brilliant The Good Wife for most of the time. That, and Rose has been decidedly low-key since her marriage to Kit Harrington in 2018.

Rose, of course, met Kit on the set of Game of Thrones. Her role as the strong-willed, quick-witted wild woman Ygritte catapulted Rose into the stratosphere and it’s hard to see that coppery hair and not expect her to be swathed in rabbit skin and have broad, Northern vowels. If anything, her true lilt should be Scottish brogue, because she lived in Aberdeenshire with her family until the age of 10. She grew up with her five siblings in the 12th-century Wardhill Castle, where she and Kit held their marriage celebrations (well, why wouldn’t you, when your father is a genuine Chieftain and your mother is a direct descendant of King Charles II, you might as well make use of the family seat).

Rose’s memories are less about coats of arms and turrets (although her family have both) and more of all the family pilling in an “ancient” car and “bumbling around Aberdeen”. “We had one of those old–fashioned Volvos, with the seats in the boot. As kids we fought for the back seats because they had the best views,” she says.

Rose has been able to flex her Scottish accent while filming the upcoming BBC One thriller, Vigil, in Glasgow, with Suranne Jones. “I feel really fortunate to be able to say that I am working; given the current situation when so many people in our industry can’t work,” she says seriously. “At the weekends, when we have downtime, I head to Loch Lomond and walk around the water. I feel a huge sense of peace when in Scotland. I’ve lived in London for 13 years now and I love it, but I’m more of a country bumpkin than a town mouse.”

I ask her if she rides horses (Rose would look great in jodhpurs, shouting ‘tally-ho’.) She snorts, and says, “Ha! That’s an actor’s trope, isn’t it? If someone asks you if you can horse ride, you automatically say, yes, yes, I can! And you learn on the first day. I don’t ride, but I do love walking. I hike as much as possible. It’s wonderful to be surrounded by nothing but beautiful, serene landscape.”

At the age of ten, Rose moved with her family to live in France, and that other inherent childhood accent has come in handy again. This time while filming the all-star remake of Agatha Christie’s Death in the Nile. Rose plays French maid Louise Bourget to Wonder Woman, Gal Gadot’s society siren Linnet Ridgeway-Doyle. The movie was shot in Surrey and a water park in the Cotswolds, unlike the original which was filmed in a decidedly more exotic Aswan. Not that redheaded Rose (she calls herself a ‘ginger’) minded the more provincial location. “I was thrilled because I wouldn’t turn into a radish. I’m not a beach holiday kind of girl. I like to stick to Europe, otherwise, I spend the whole time in the shade, under an umbrella, smothered in factor 50.”

Like Ygritte, French maid Louise is a dark horse, collecting the secrets of her rich-bitch mistress and storing them away for a time when they can be more potent. “It’s appealing to play a character with a bit of resilience and backbone”, she says. “I’ll play any type of character, of course, but I am drawn to those who are forced to step out of their comfort zone. I’ve never been in the position of being the leading lady but with that comes a lot of pressure she laughs.

Of course, if you spend many years playing the Mother of Dragons or Jon Snow it’s much harder to shake off that character, and Rose admits that she feels fortunate that she was in the juggernaut that was Game of Thrones for only three years, compared to Kit’s ten, for example. “It was an incredible experience, and for me – as an actor – it definitely opened a lot of doors with casting directors, and producers.”

Rather sweetly, and with genuine modesty, Rose often talks about herself as a jobbing actor, rather than the column inch-filling, a headline-generating movie star that she is.  “You never lose that niggle of worrying where the next job is coming from. That feeling never leaves. The fact I have a job at the moment is very lucky. So, I’m very grateful for what I have now, and living day by day.”

Despite being a descendant of a king, Rose describes the new country bolthole that she and Kit have bought as a weekend escape, as “the house that Jon Snow built”. It’s a Tudor manor house deep in East Anglia.  “It’s incredibly old. We have a thatched roof, which currently has an enormous hornet’s nest in it. I do love to think about the house and all the people who have lived there. Were they happy, how did they live? All the families passing under those ancient beams.”

After years of living in New York, it’s a return to nature for Rose and a chance to set up home with her husband, and new baby. “What a glorious thing to be able to run to the countryside and recoup. It’s a great privilege to be surrounded by greenery, birdsong and hedgerows, and our delightful neighbours. It’s so peaceful.” And peace is something I hope Rose gets. She deserves it.

Hair by Liz Taw at the Wall Group

Death on the Nile will be released in the worldwide on the 18th of December 2020. 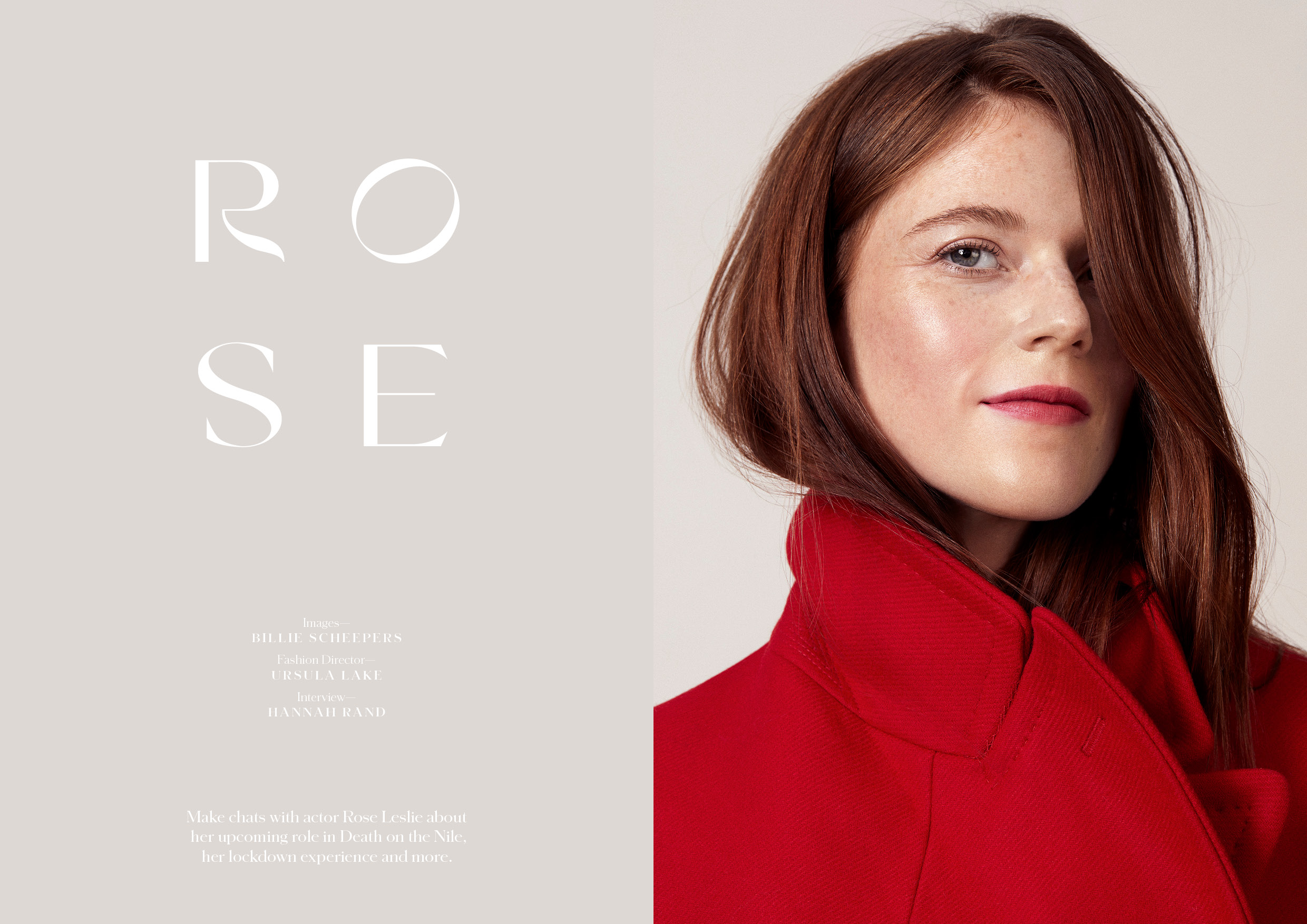 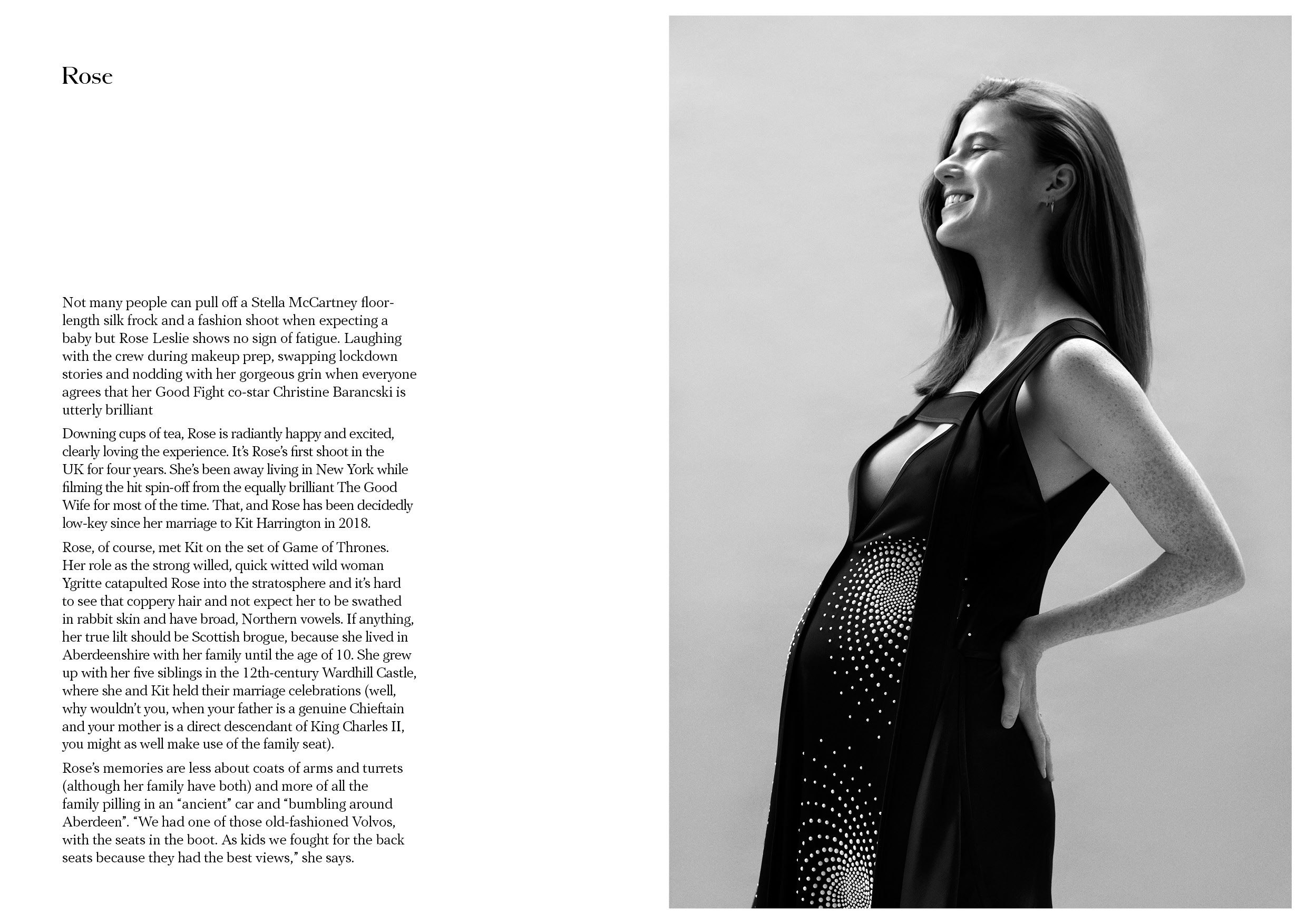 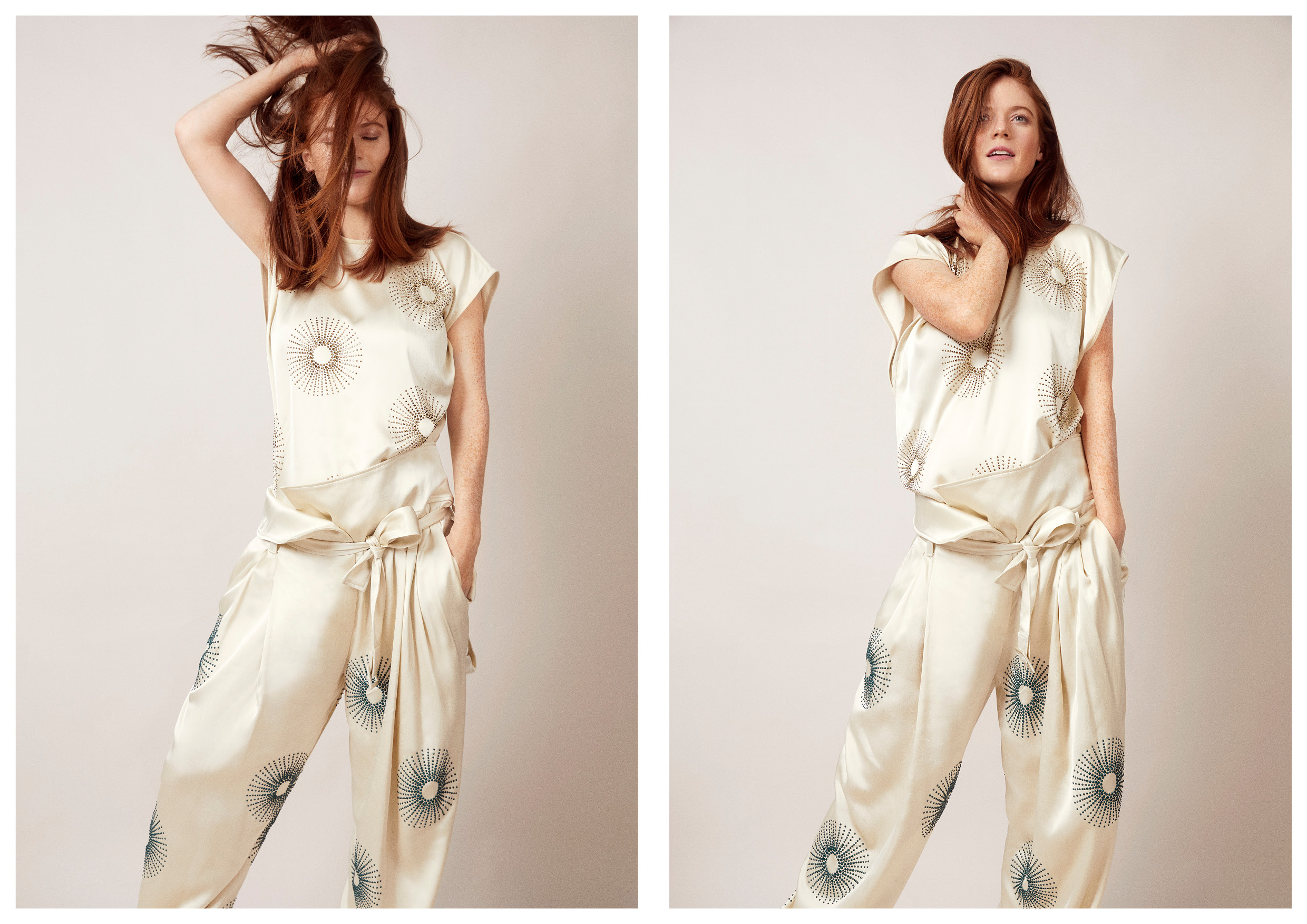 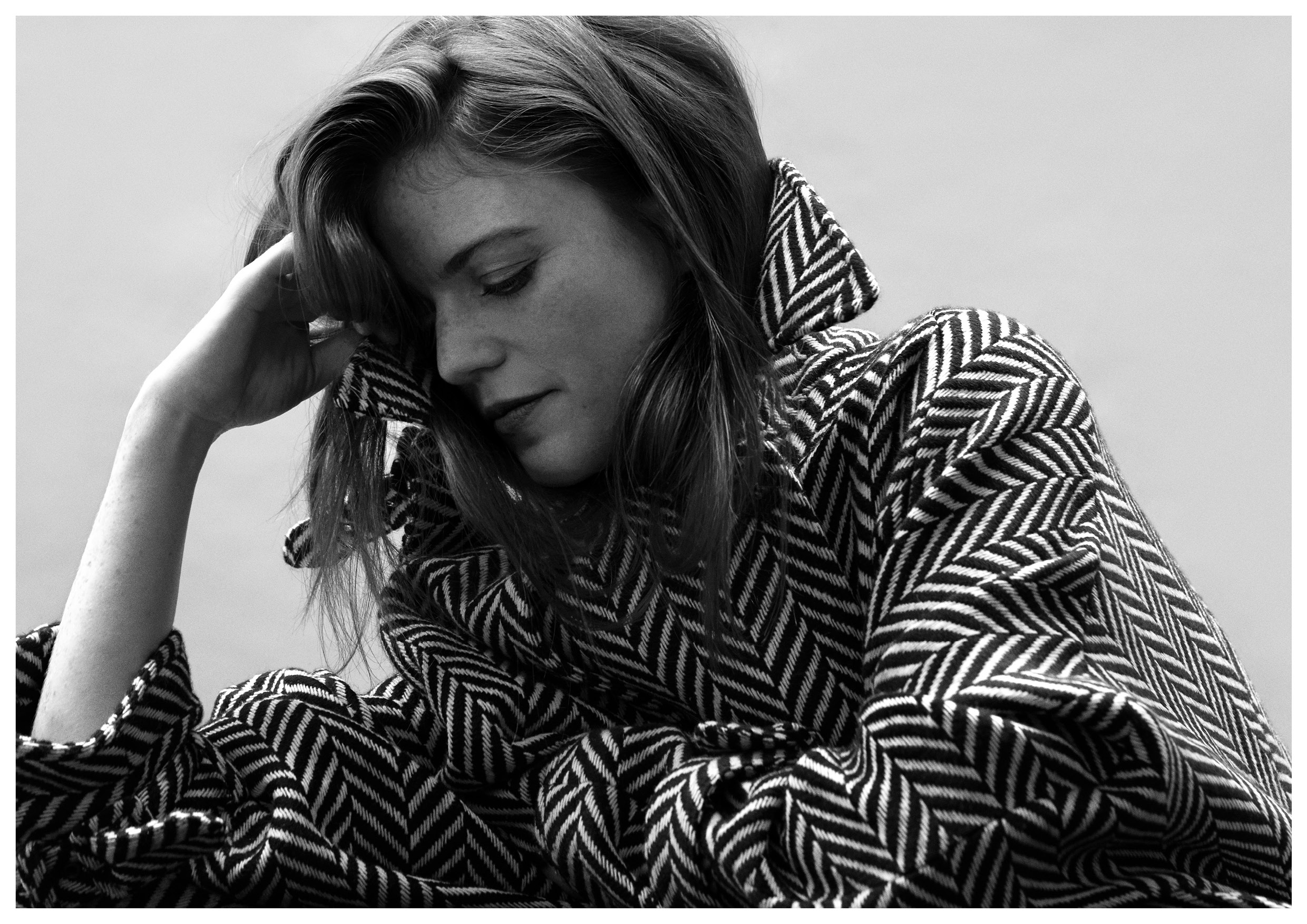 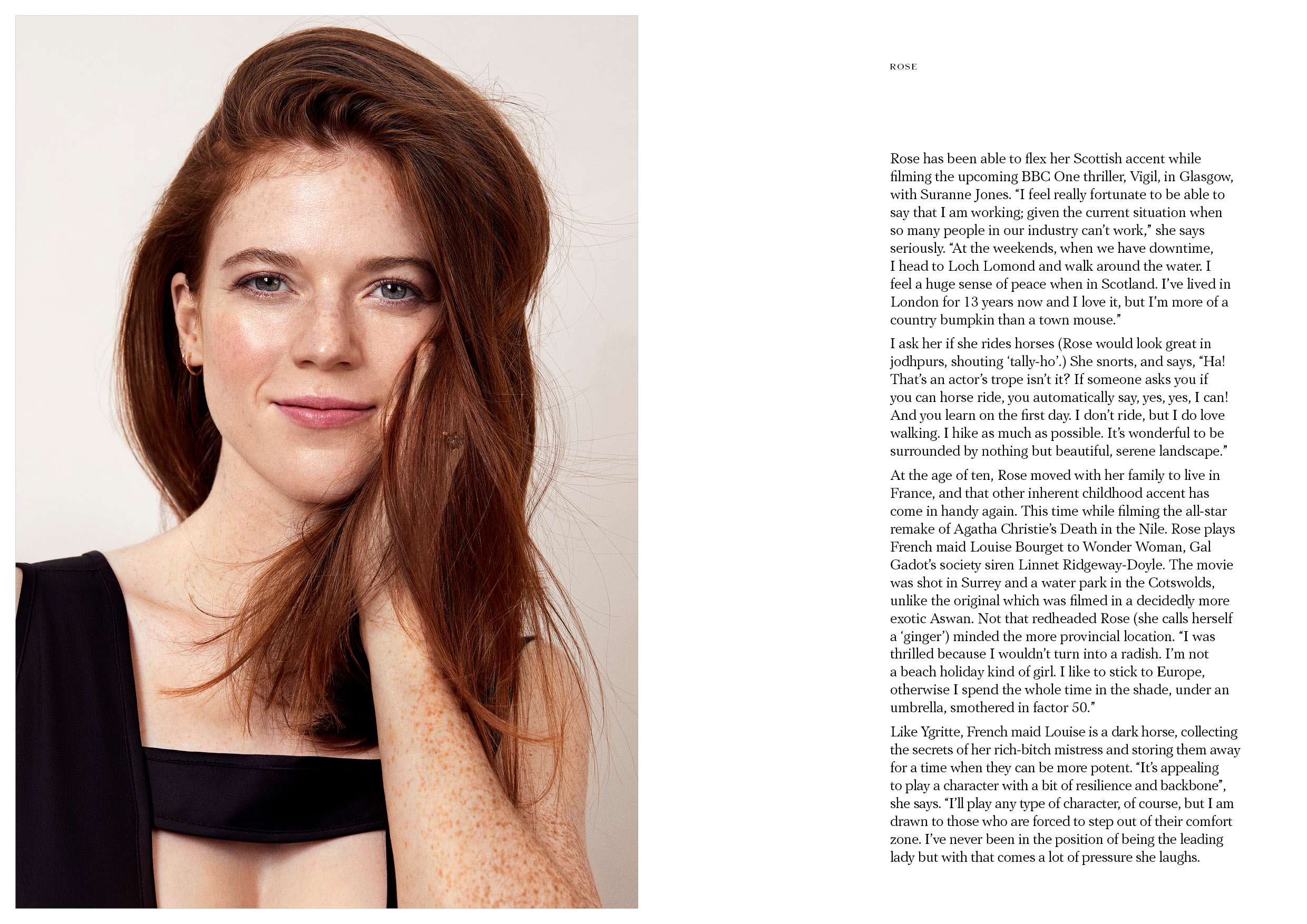 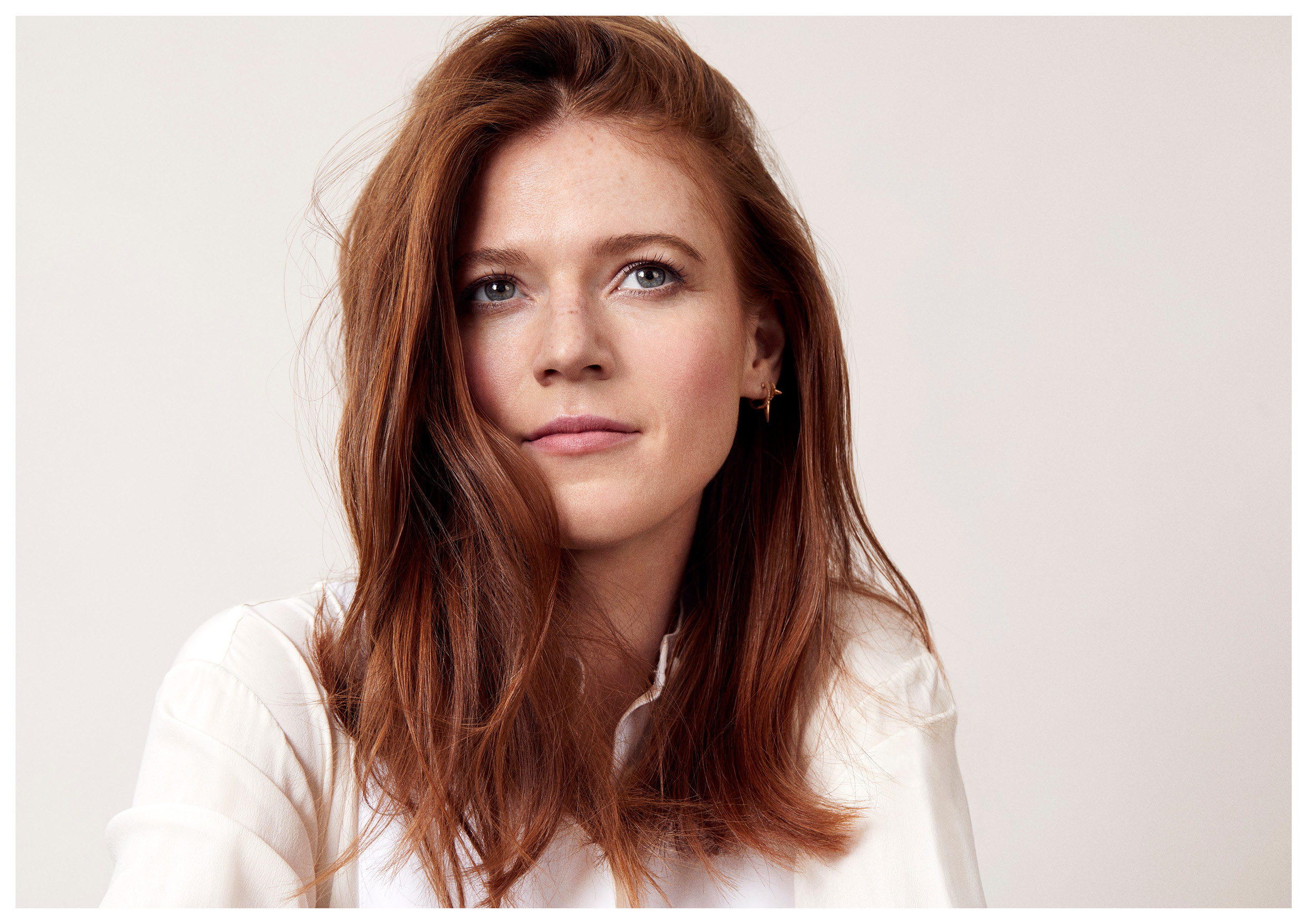 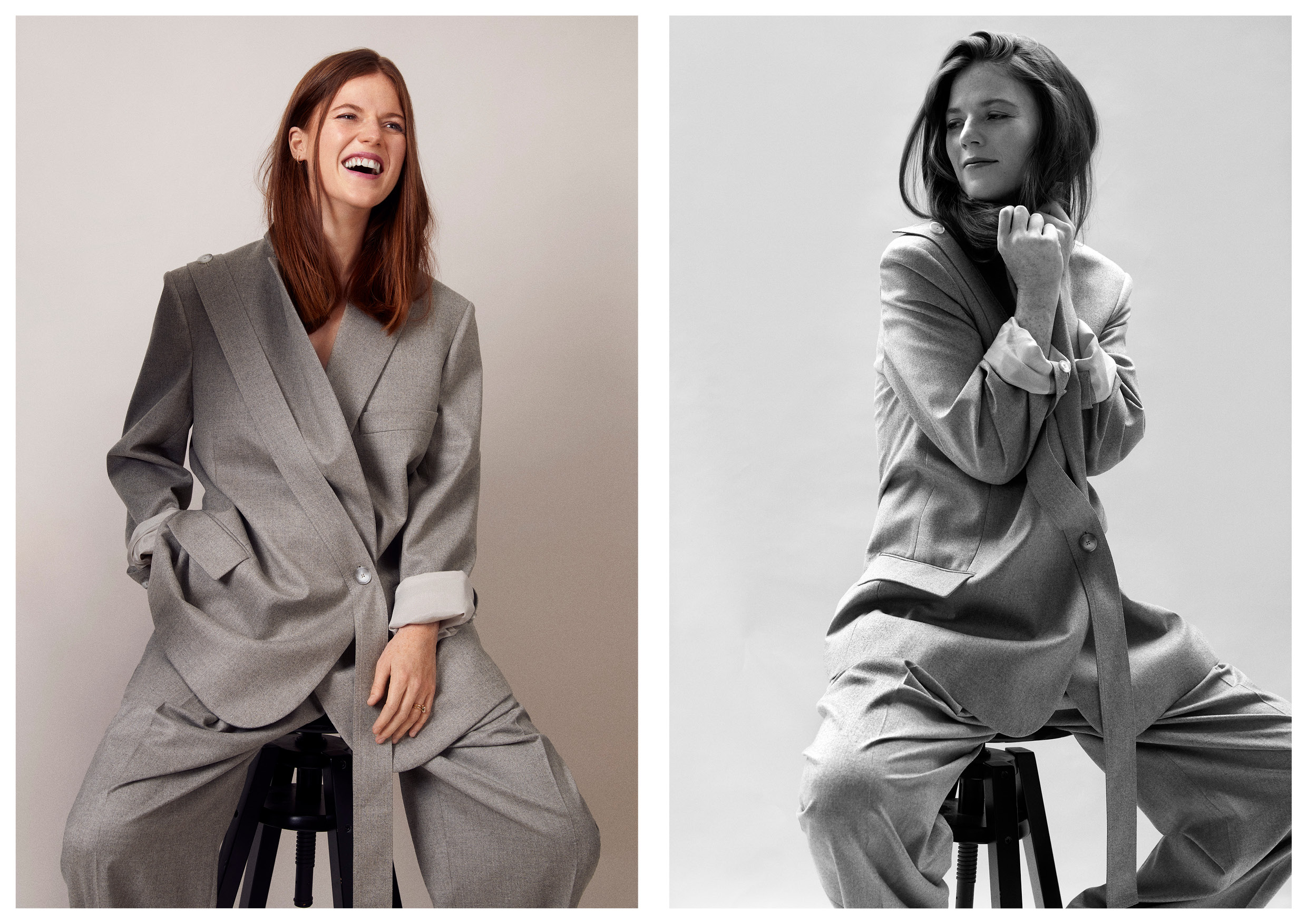 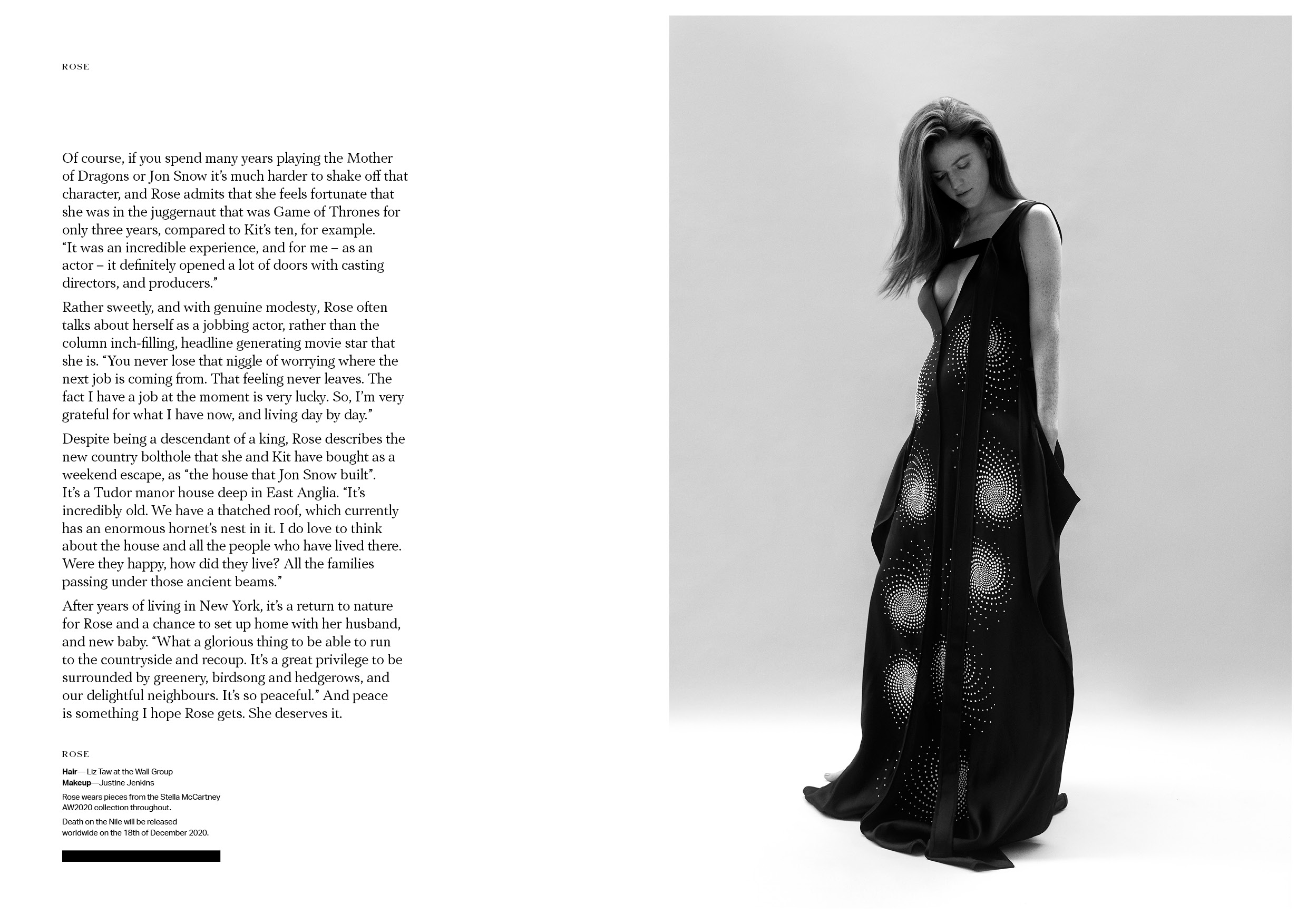