Mongolian actor Gana Bayarsaikhan channelled the strength and spirit of her nomadic grandmother for her latest role in Waiting for the Barbarians.

At the 2019 Venice Film Festival, all eyes were on Gana Bayarsaikhan at the photocall for one of the most hotly anticipated screenings of the year, Waiting for the Barbarians. Dressed in a white pleated, tuxedo-style jumpsuit by Ashi Studio, the actor radiated simple elegance and quiet beauty.

Starring Sir Mark Rylance, Johnny Depp and Robert Pattinson, the film depicts a dust-blown colonial outpost, deliberately unidentified, and the brutal oppression of the native people, despite the best intentions of an empathetic, but powerless, local magistrate. If it sounds heavy, it is. Director Cira Guerro’s remake of the Nobel-prize winning J.M. Coetzee’s novel does not shy from commentary that the film is an allegory for our politically sensitive times.

For a relative newcomer, it could have been a daunting undertaking, particularly as her character, eerily named just ‘The Girl’, has so few spoken lines, despite being a central character. However, speaking to Make Magazine from her London home, strikingly beautiful former model Gana tells us that she drew inspiration for the role from the wild landscape of the Mongolian prairies, where she played as a child, and how her nomadic grandmother taught her to draw strength from silence.

Q. Mongolia is a country steeped in ancient mysticism to us here in the West. What was your childhood like?

A. I was born in Ulaanbaatar city, Mongolia’s capital. My mother is a paediatrician and my father was in the army, and I am the youngest of my siblings and the only girl. I was a quiet child, who loved stories, paintings and making dolls’ clothes. My father was a good painter and an amazing storyteller, who influenced me a lot when I was growing up. I still paint to relax now.

UlaanBaatar is a big, modern city but it’s true that Mongolia is still very traditional in places. I spent most of my school holidays in the countryside with my grandmother, Yanjin, who was a nomad. We would all stay in a tent and get up at sunrise to help herd her animals. When we had free time, I’d play with my brother and cousins with stones, plants and anything we could find to turn into toys.

From a young age, we were told to respect nature, and we would be told off for collecting too many stones, as there is a local saying that says, ‘Once you move a stone, it takes them many years to get back to their original place’. Nature is very important to Mongolian people – and these lessons of respect have stayed with me throughout my life.

Q. It sounds very beautiful and peaceful. Do you go back often?
A. As much as a can – and I always go to the countryside to recharge my body’s battery. Sitting on a mountain, looking out into the wide plain, watching the swimming snow clouds in the eternal blue sky, feeling the soft fresh breeze on my skin makes me feel free.

Q. It sounds wonderful. Does your upbringing and respect for nature permeate through your acting?
A. Mongolia is varied in terrain and climate; from desert and grassland plains to the forests of Siberia. The temperatures are extreme – they can go from minus 40 to plus 35 degrees. As a result, Mongolian people are versatile and adaptable, and I think having this quality helps me with my different roles. This is especially true with the character of The Girl who is grounded through her connection to nature and her people, which greatly resonated with me. You see, the process of finding her roots forced me to reconnect with my own ancestry and indirectly made me go back to my childhood memories with my grandmother. She was instrumental in the character’s development, so I dedicate this performance to her.

Q. Can you tell me more about your character in Waiting for the Barbarians?
A. The Girl is a victim of brutal torture and imprisonment by oppressors in her own country, but, even though all her suffering, she retains her dignity. She is a survivor and her spirit is unbreakable. In the original novel, The Girl’s voice is quite limited so I felt compelled to further explore her story when I had a chance.

Q. The film is exquisitely shot. As an artist yourself, did you enjoy the cinematic side of the production?
A. The cinematographer Chris Menges inspired me every time I was on set with his photographic magic. Playing The Girl’s character was challenging and heartbreaking at the same time, but Chris painted the set with light and made the scenes beautiful. It was incredible to watch our scenes come to life.

Q. Johnny Depp and Mark Rylance are both incredibly successful actors – with very different styles. What was it like working with them?
A. It was a privilege to work with these great actors. It’s been a dream come true; I couldn’t have asked for a more supportive cast to work with. I had one scene with Johnny Depp, but most of my scenes were with Mark. He was great support and I found him very inspiring to watch, almost like being back in training. Despite his success, he is incredibly humble and that is something I will take with me through my future career.

Q. You mention The Girl’s inner strength. Who in your life has given you the best advice – was there anyone you could draw on to channel that spirit?
A. My mother is very supportive, she is always there for me and I can talk to her about anything. On the other hand, my nomad grandmother, who never talked much about feelings or hardship and just got on with life, had so much strength hidden behind her silences. There’s a famous Mongolian saying, ‘When you fall down, stand up, fix your skirt and carry on!’ This thought has been a guiding force throughout my life. We talk of a growth mindset as modern teaching but it’s actually ancient – the understanding that mistakes often lead to bigger and better things.

Waiting for the Barbarians is available on digital download in the UK now. 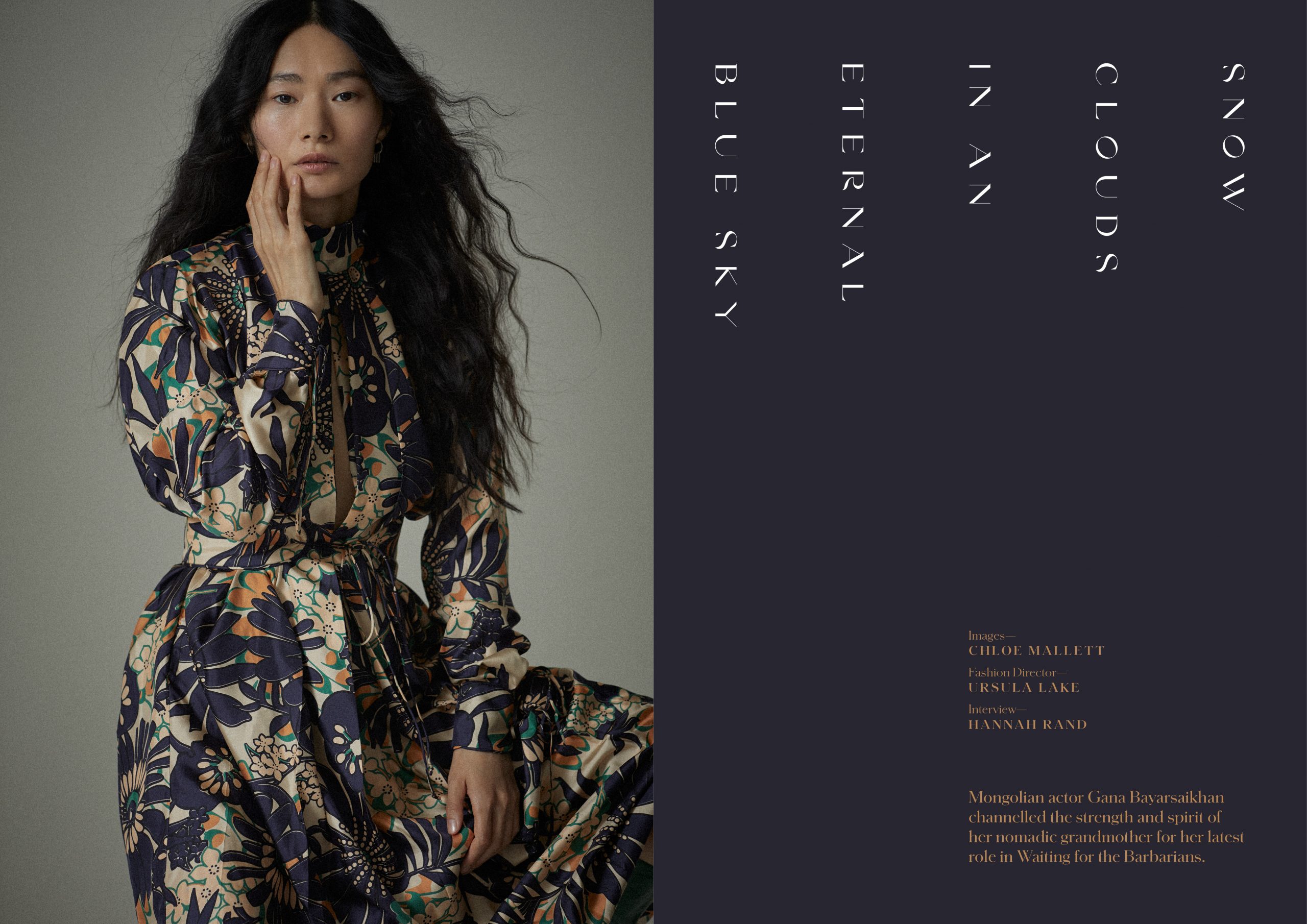 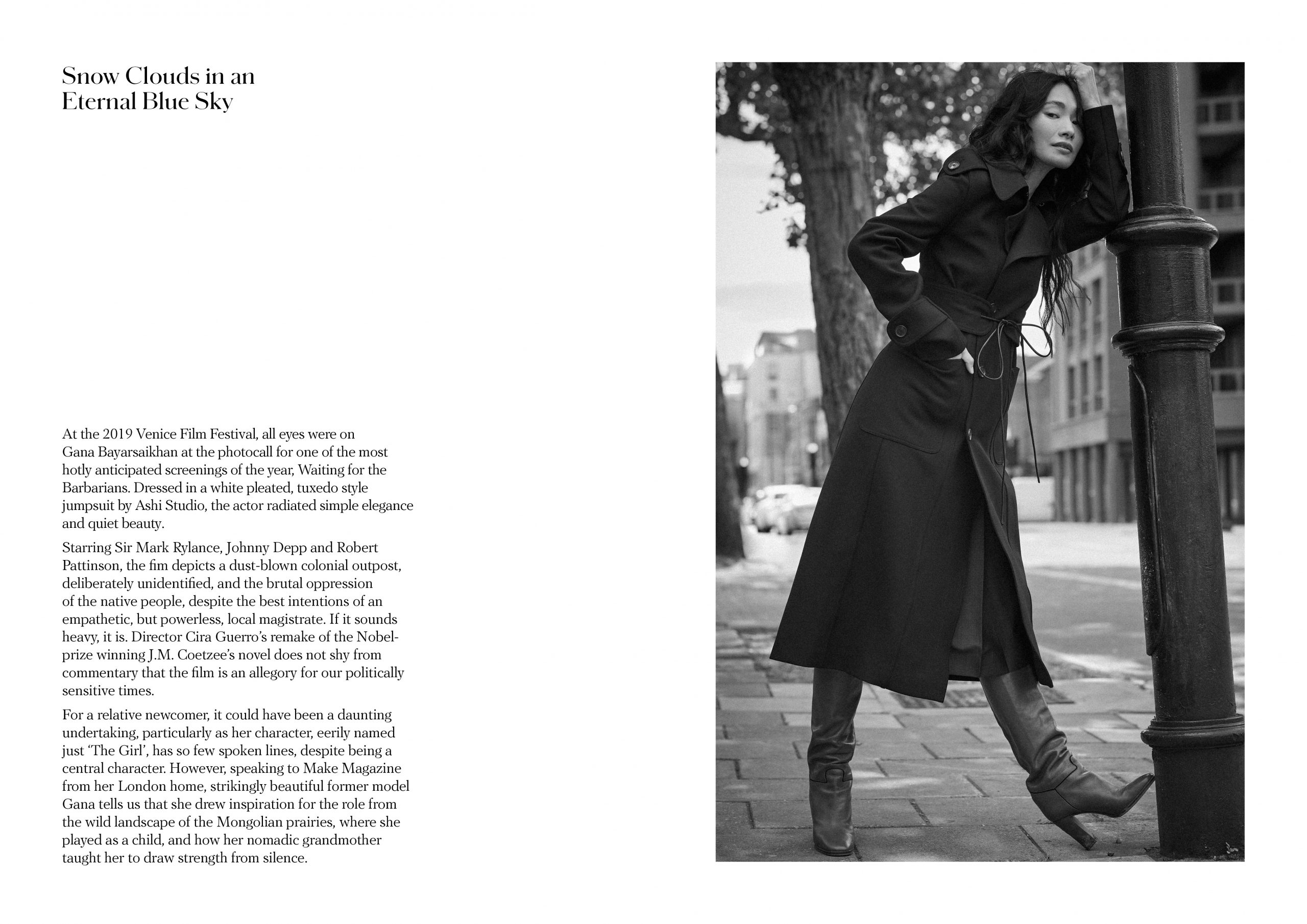 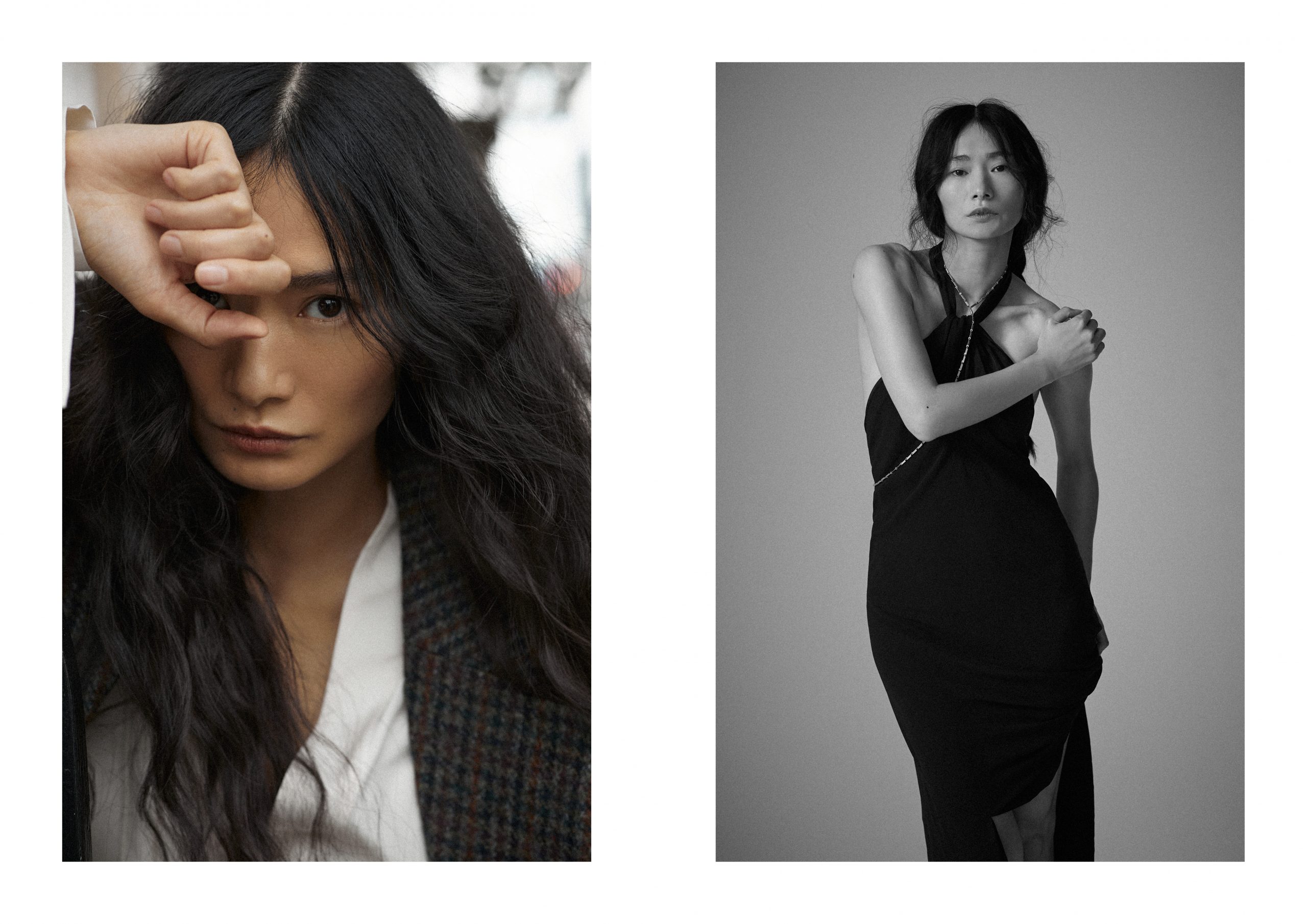 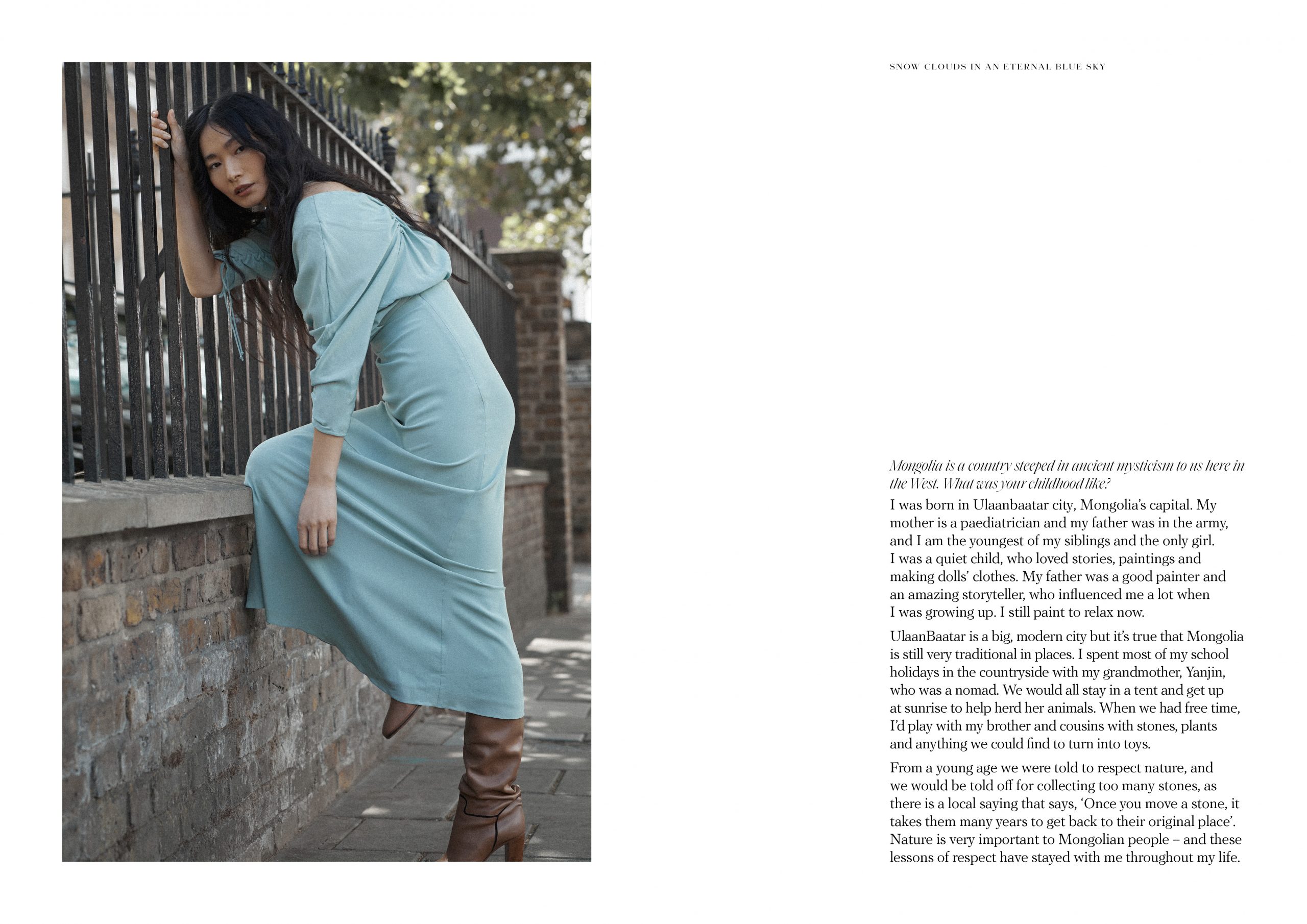 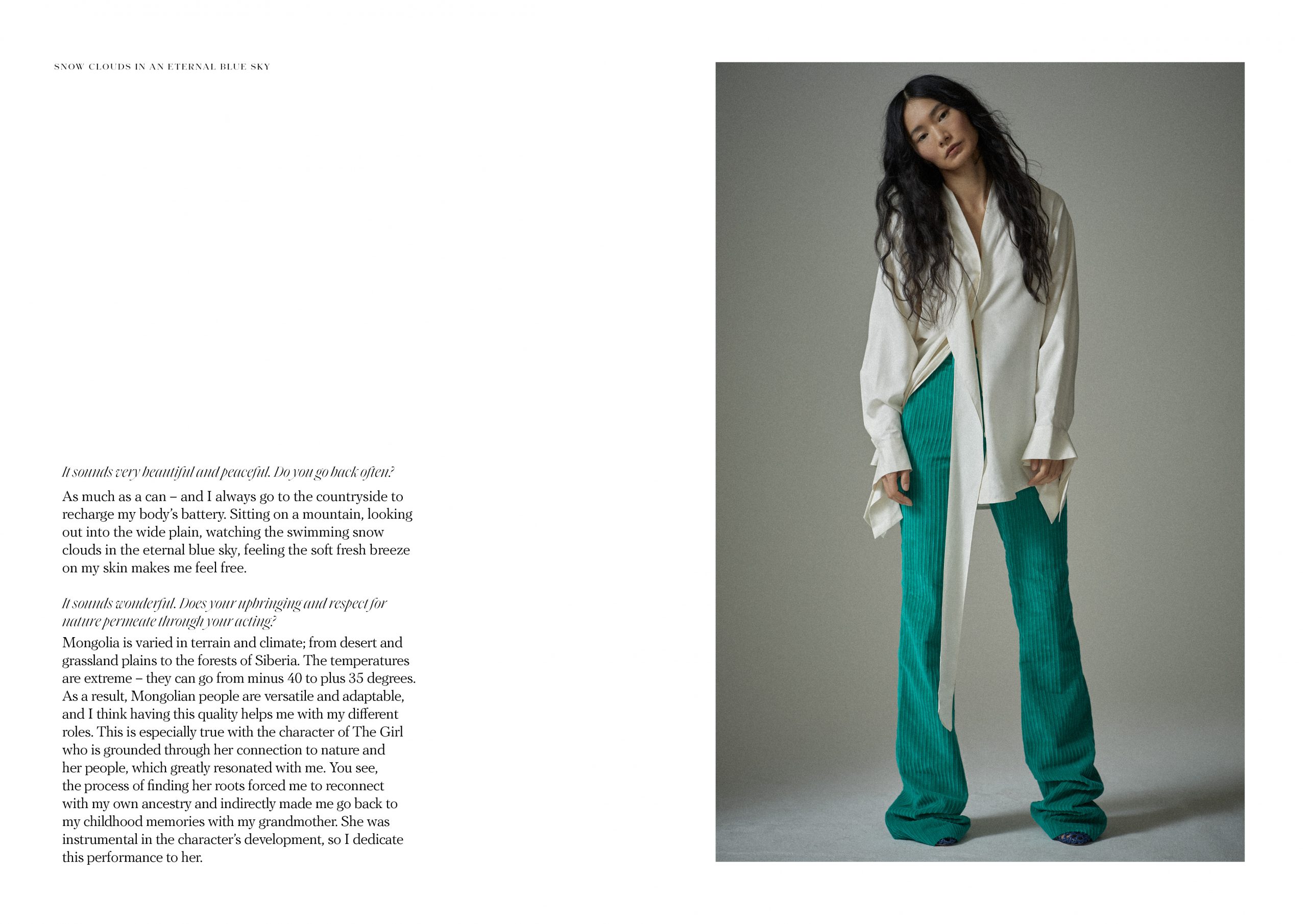 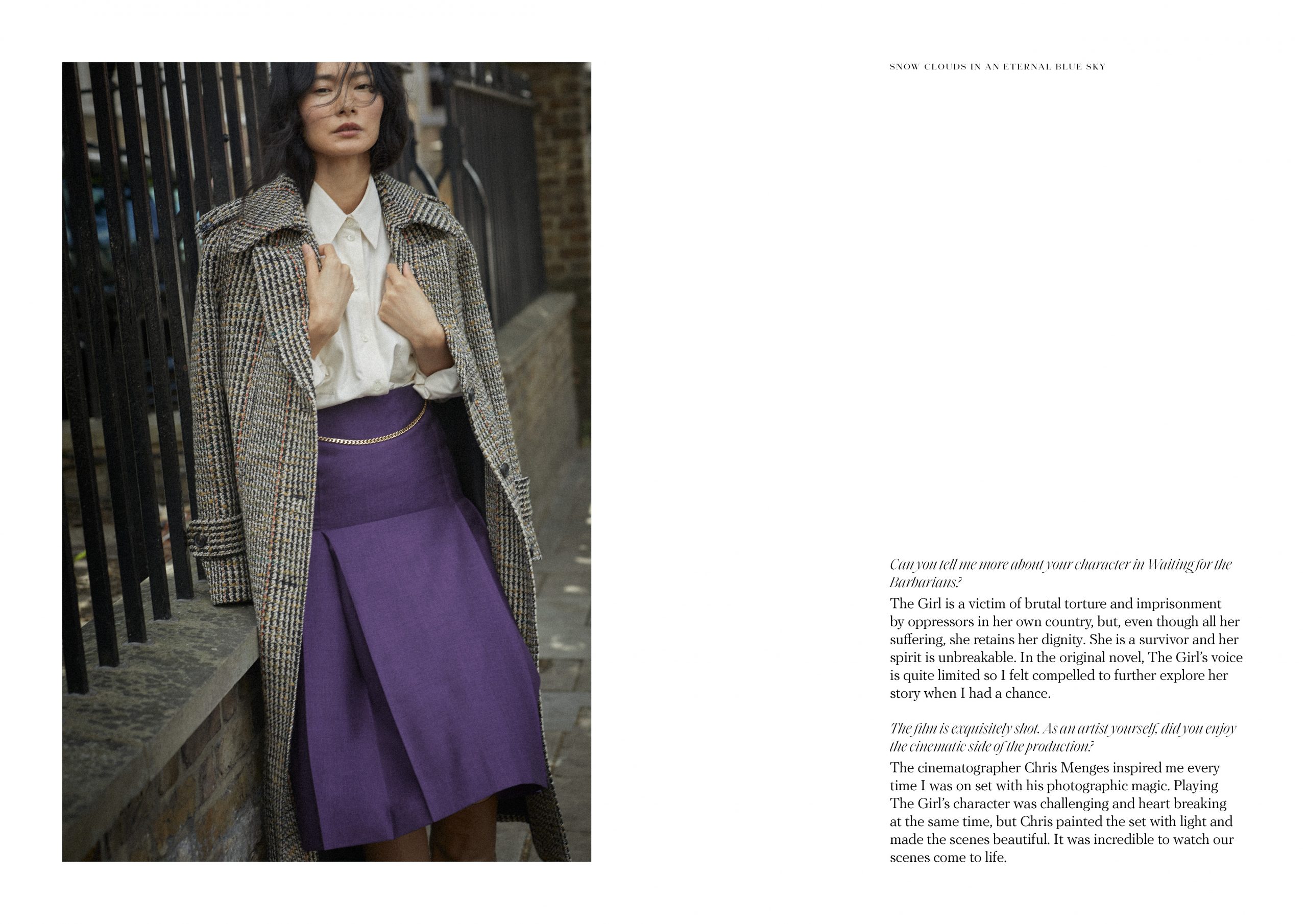 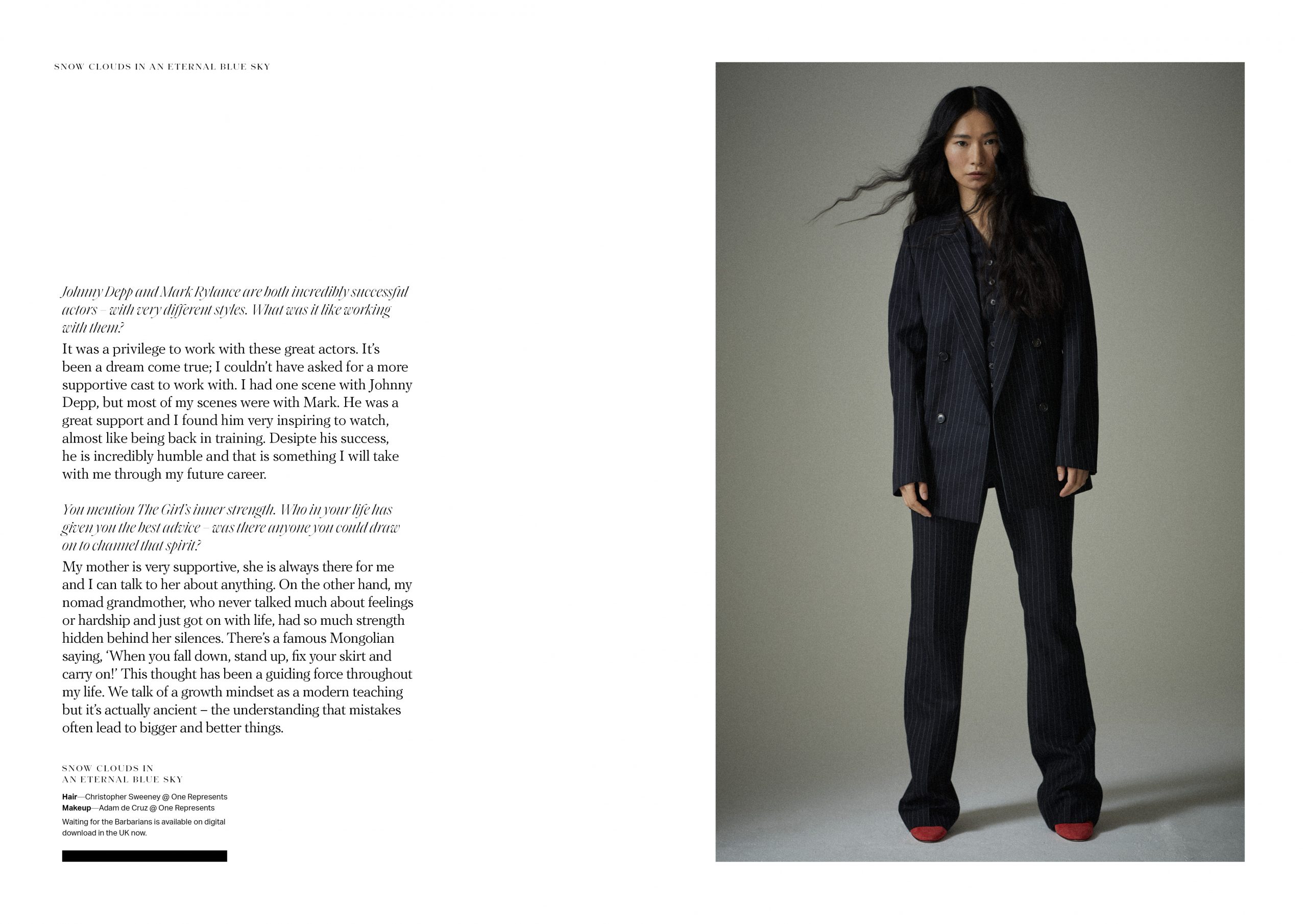