Non-binary: An umbrella term for people whose gender identity doesn’t sit comfortably with ‘man’ or ‘woman’. Non-binary identities are varied and can include people who identify with some aspects of binary identities, while others reject them entirely. Make chats to visual performance artist, model and self–titled gender inbetweener, Liz Ord.

Q. What does your status as non-binary mean to you?
A. Being non-binary means something in my shoulders. When I was younger, I always thought I had ‘boy shoulders. I’d look at pictures of lithe rock boys with their shirts hardly done-up and sweaty make-up on their faces and think…that’s me, I’m just a rock boy.

I grew up in Italy and at first, I was treated as a ‘girl’ and then as a ‘Liz’. I think I just wanted to be a Liz, without all the performance that comes with femininity.  I wanted to have a conversation to a group of men on the side of the road and it not be ‘me and them’, to be seamlessly indistinguishable from them. So, when I was a teenager, I would choose men and walk behind them to see how they did it differently to me, to see what small signs of masculinity I could embed into myself

Being feminine is performative to me; putting on a big flouncy dress and pouting. I perform it and I enjoy it. But when I’m alone in my room with my shoulders, in my pants: I am a boy. I could say words that are more faux-inspirational than that, but for me, it has always been a bedroom–grown feeling, something quite private that grew into the way I see other people’s gender composition; a bit complex, a bit simple, but really, actually, nothing revolutionary.  I’m definitely the most socially acceptable form of a non–binary person. I’m white, skinny and androgynous. I think a common misconception is that to be non–binary you have to look like me. You don’t, you can look like absolutely anyone.

Q. What do you think are some common misconceptions about being non-binary, or things that people struggle with?
A. Everyone struggles with the pronouns. I have my personal preferences and, in all honesty, I don’t mind if you slip up, I think all anyone wants to see is an honest attempt, not perfection.

If you want to know a big ‘no-no’ that I’ve surprisingly but frequently encountered, then imagine this scenario: You meet a stranger and after five minutes of small talk they lean over and (in a gentle stage whisper) utter “Not to be weird about it but… what’s going on down there?” And then stare at your crotch!

Q. Do you think the fashion industry is better placed than other industries to include/represent/support gender identity issues?
A. Old-fashioned fashion champions androgyny. However, this is a pretty mainstream view of gender identity; androgyny is about what someone looks like whereas gender identity is what they feel they are.

I see gay people getting cast for campaigns more and more, partially because, like most marginalised groups they just have an aesthetic that fashion wants to pick up on; queers can look amazing! But sometimes there is this feeling of tokenism, including people who are different just to be gawped at.

I’ve been on a set where I was asked to be there because I was dating a girl but everyone behind the camera was straight, the feeling was strange and voyeuristic. I’ve seen people be invited to sets because they were trans and be mis-gendered all day.

I think, like almost everyone who is queer, when I go to my workplace, I leave parts of me at home, being malleable is a part of my job. I turn up, someone hands me an outfit and I play and dance and stand perfectly still in character; those parts are great, the play and pretend. The only times I have felt uncomfortable: getting called a woman. Although in all honestly, I understand that we learn to recognise traits and I ‘look’ like a woman to people.

It’s a slow process but to change things we need to start getting people behind the camera from marginalised groups then I think the fashion industry can boast of inclusivity.

Q.What do you see for the future of gender identity? And how could that look in relation to the fashion and media industries?
A. Questioning things! What does it mean to be a boy or a girl? Physically. Socially. Mentally. What does it mean to be brought up as a girl and in your head you’re not one? What if femininity or masculinity could mean something else? I find gender and its social implications absolutely fascinating. The mental exercise required to even simply change someone’s pronouns is hard. You’re asking your brain to take something that it’s had hammered into it (x, y, z means they are a woman/man) and your re-writing it. It took me ages to do when I was first asked, but I think it made me smarter. It’s really exciting for me 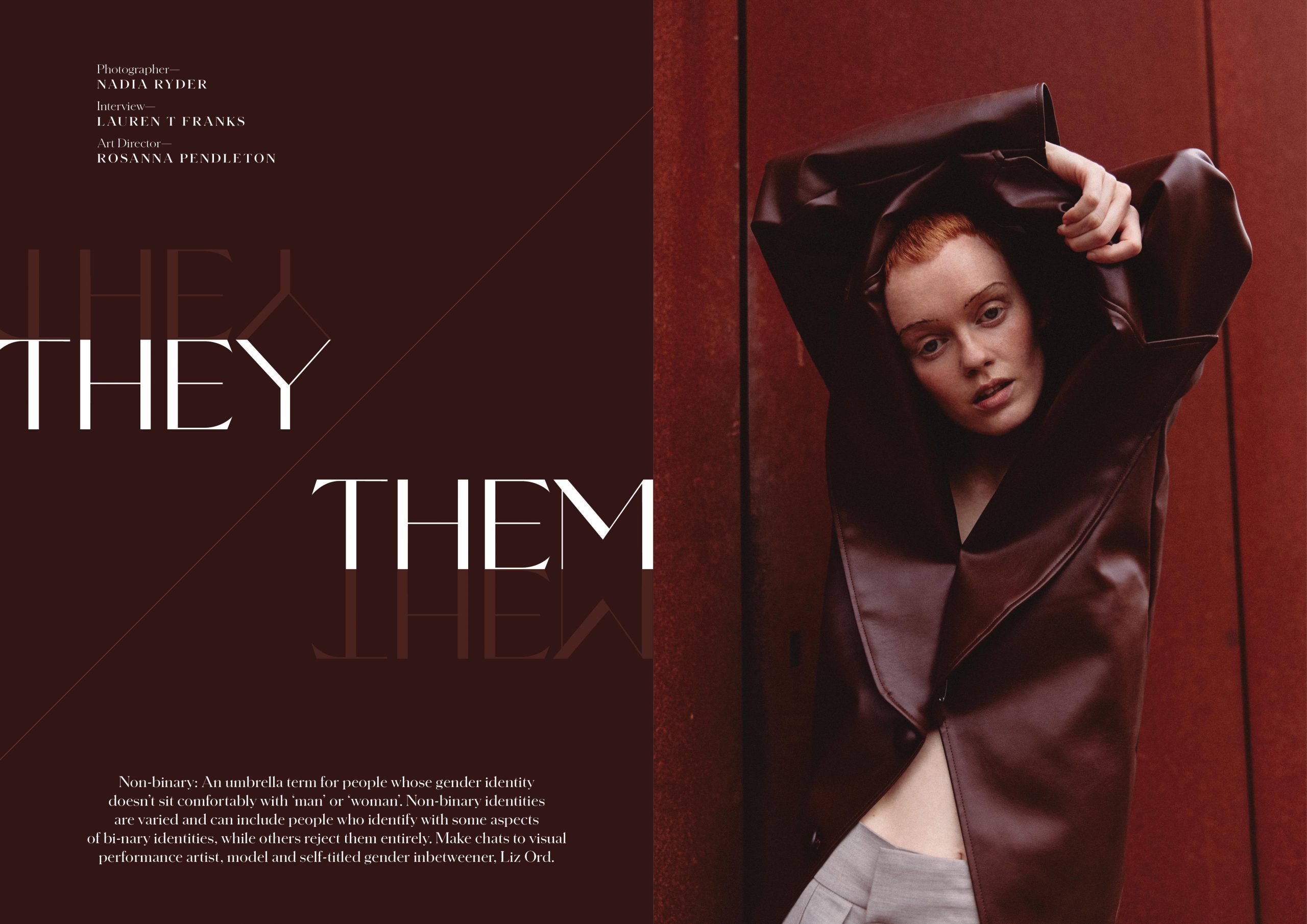 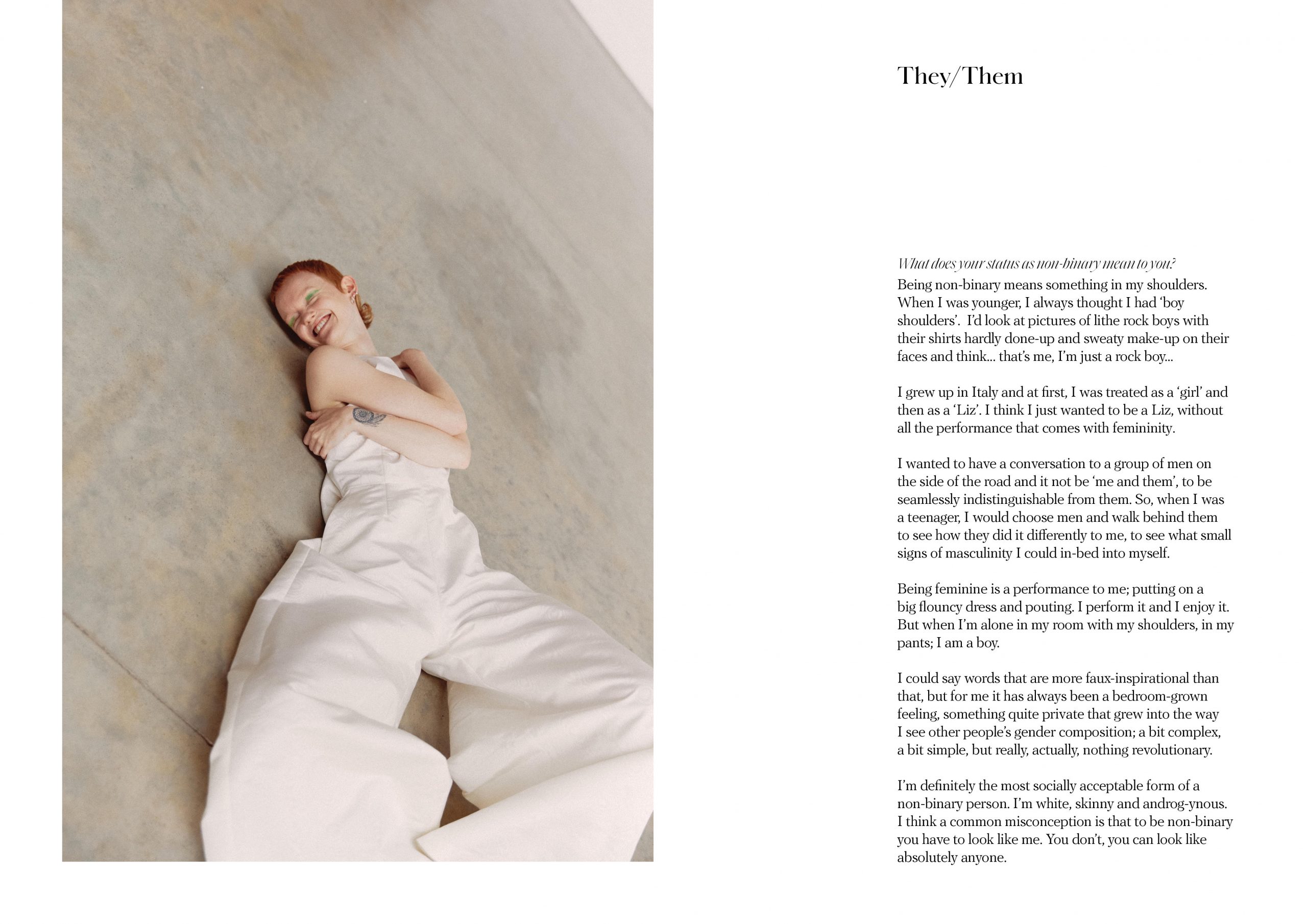 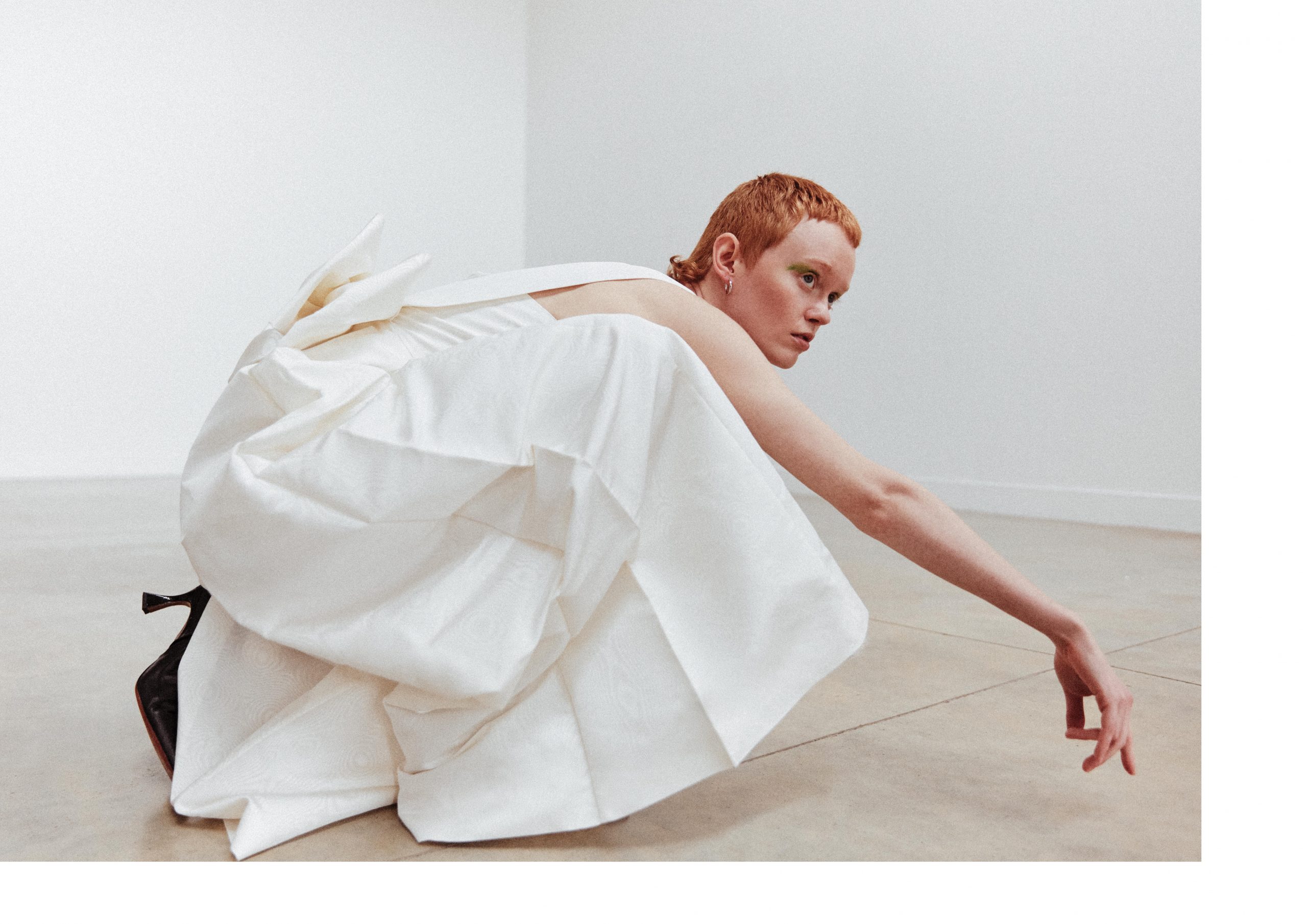 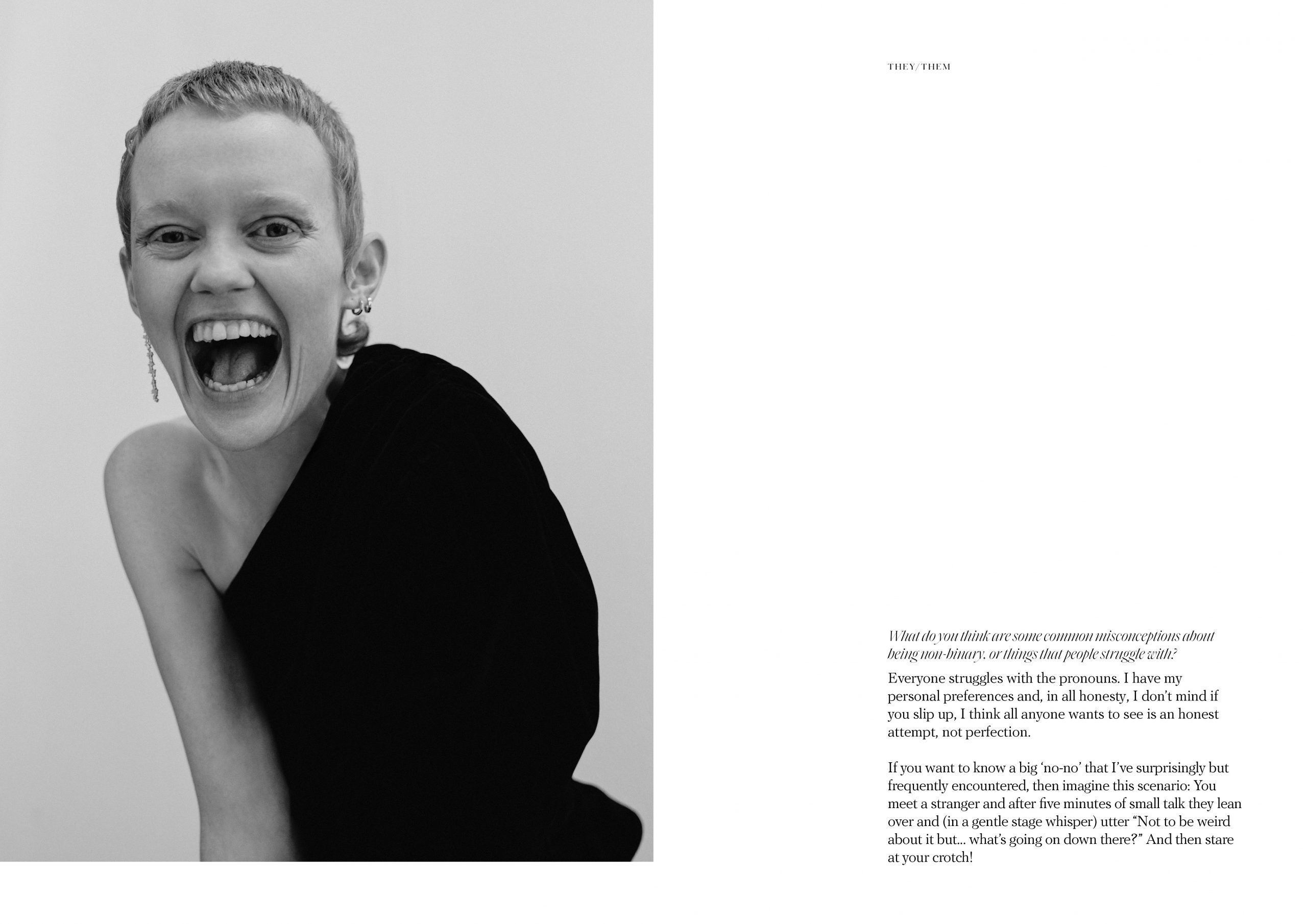 Black cotton dress by Nynne
Jewellery throughout by Sif Jacobs 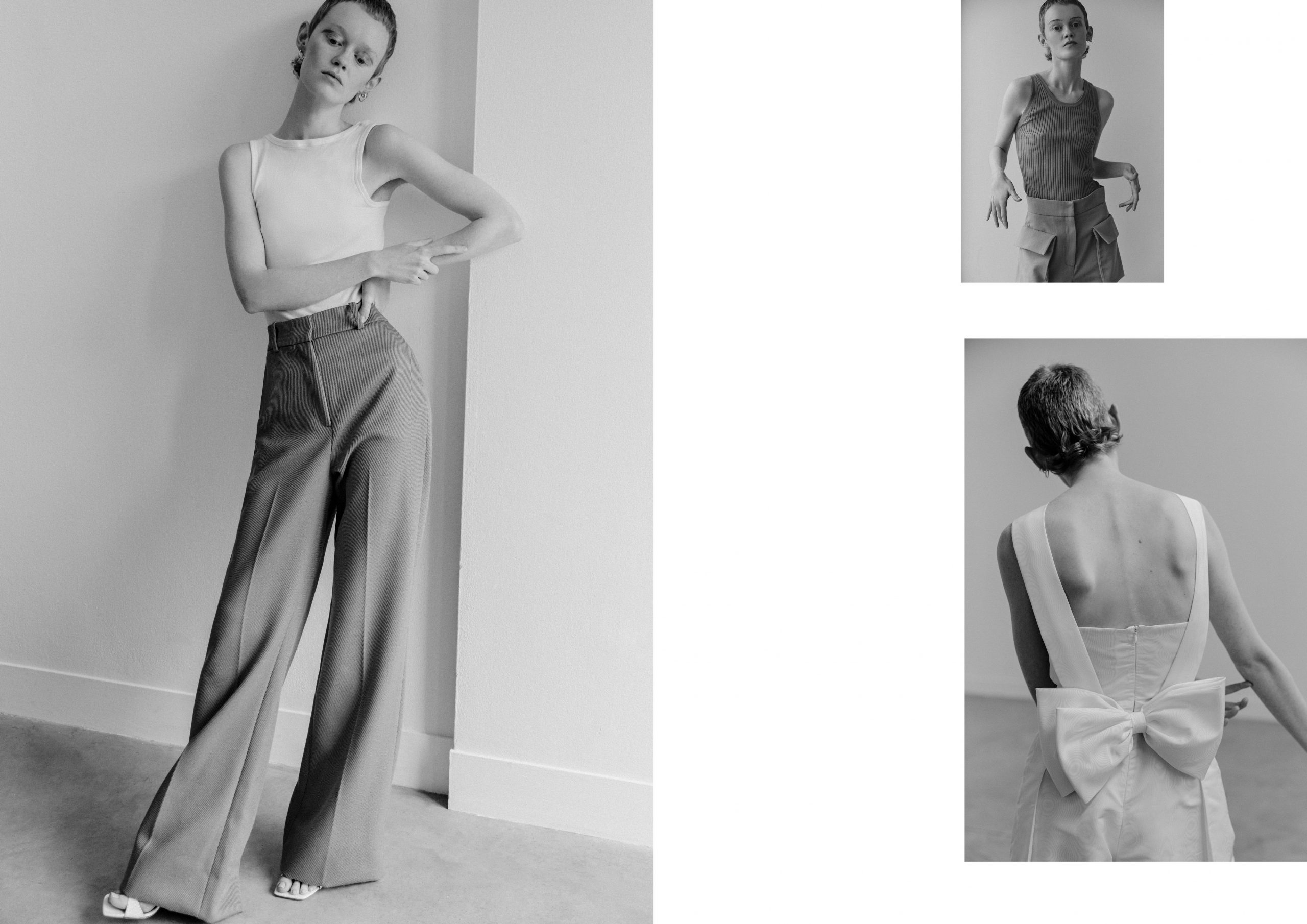 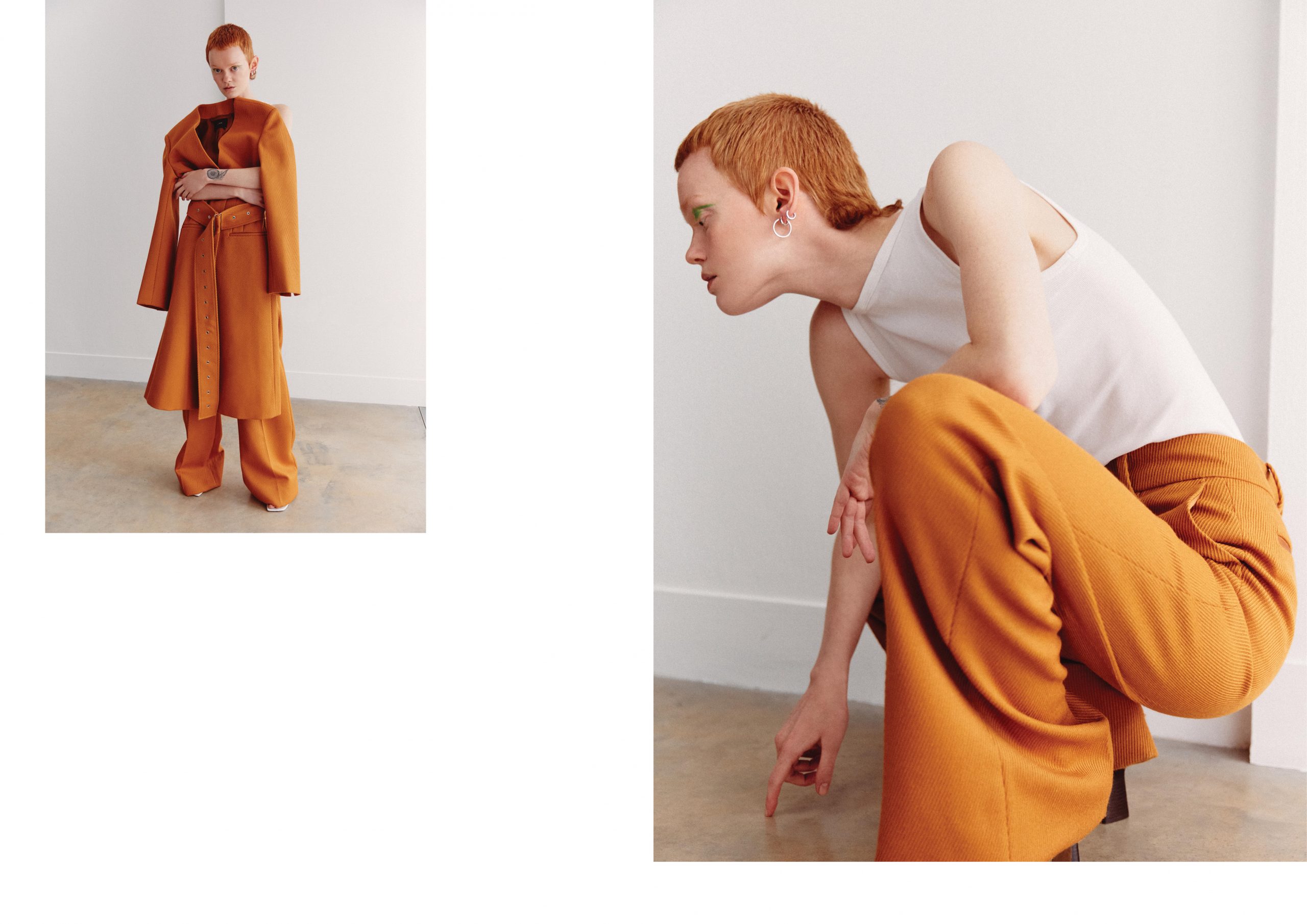 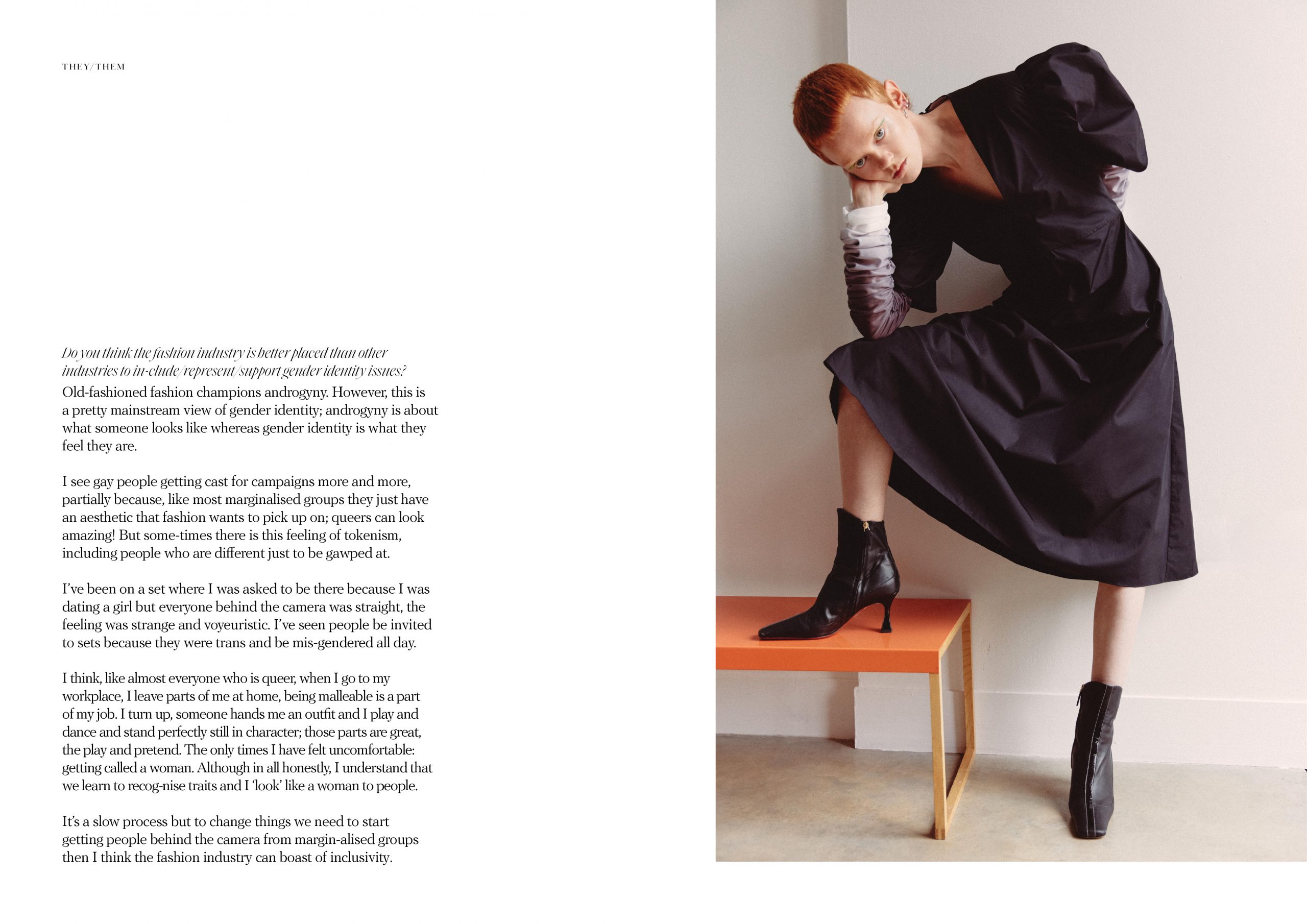 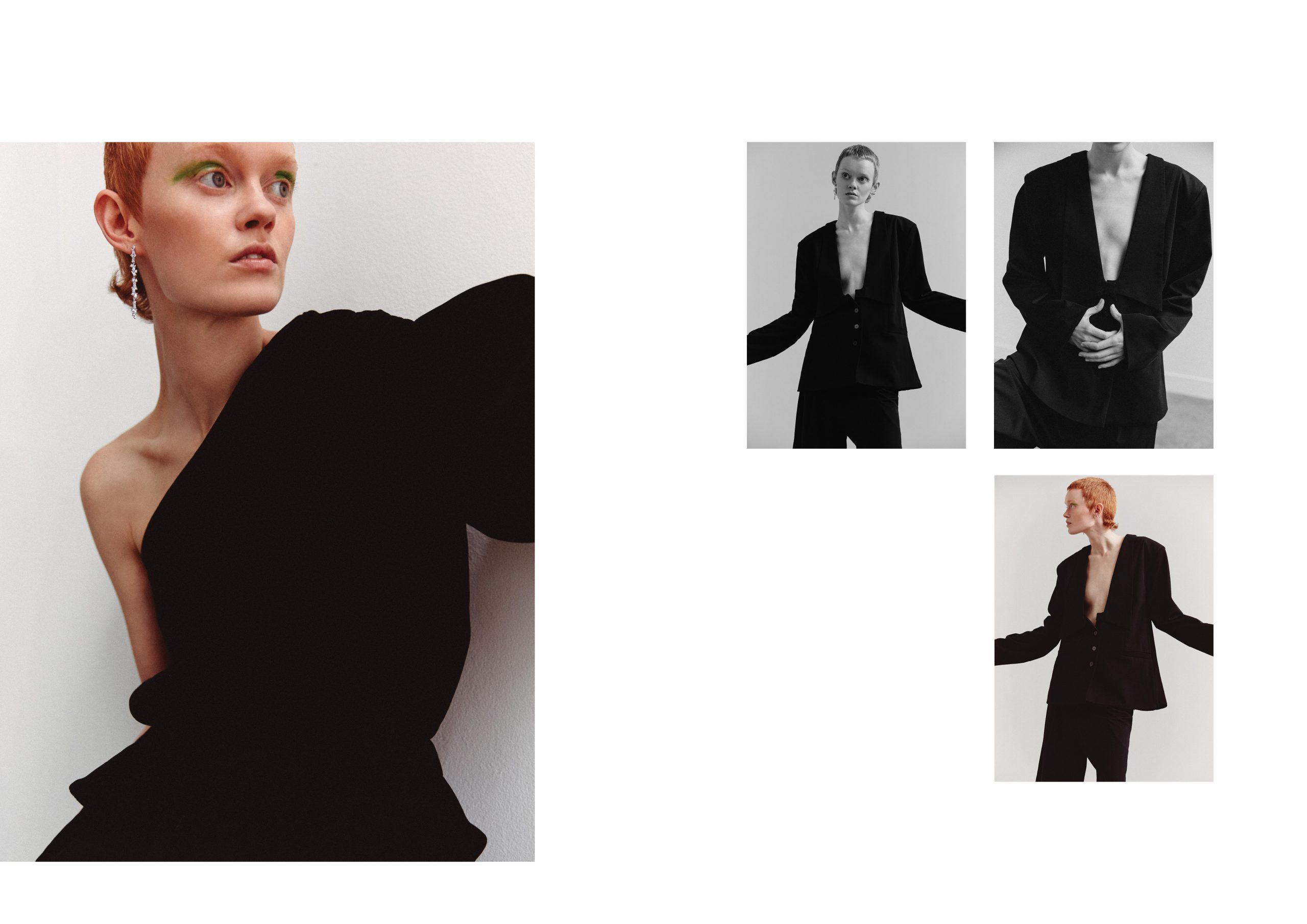 Right-hand image:
Black trouser suit by Nynne
Shoes by By Far
Jewellery throughout by Sif Jacobs 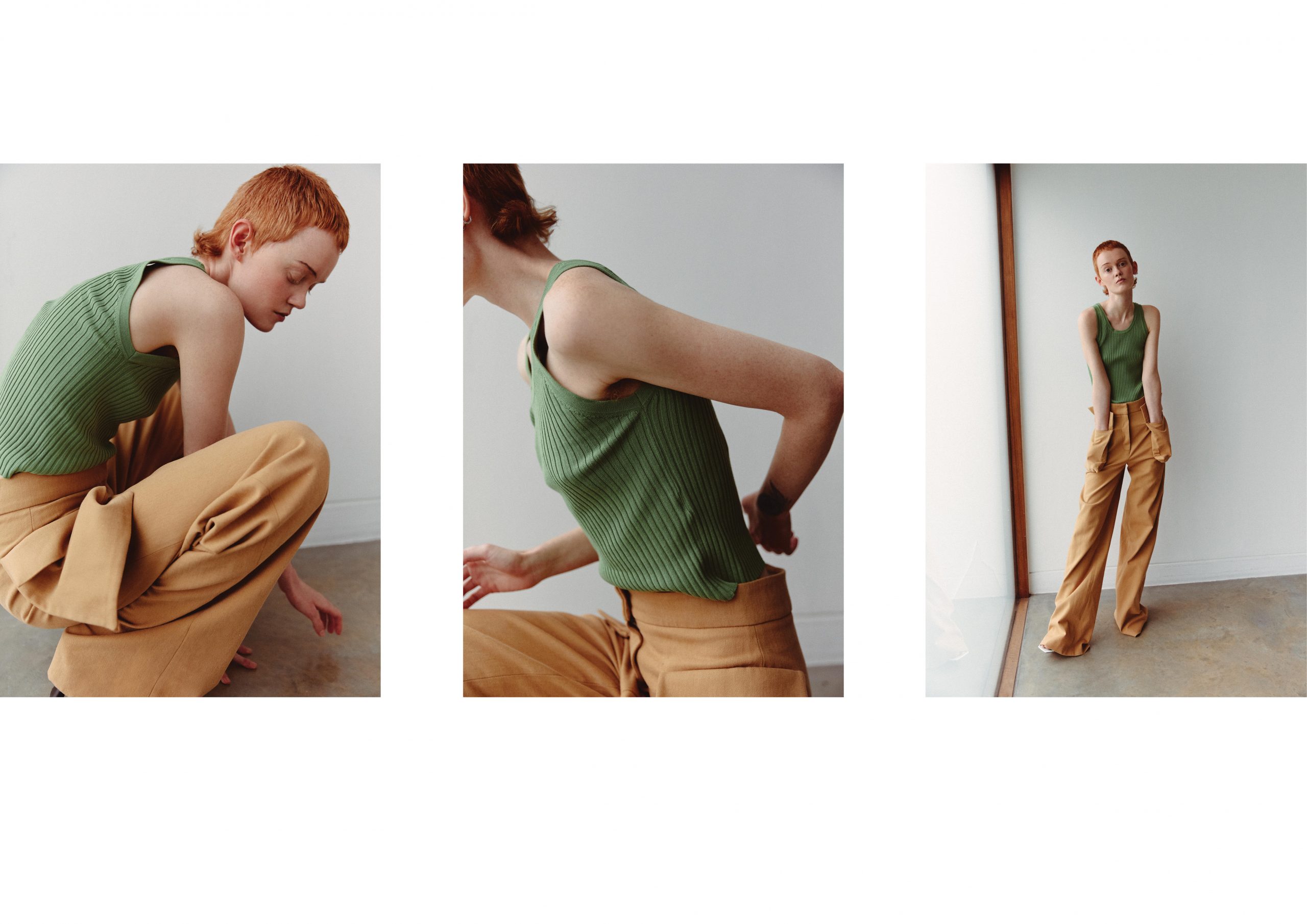 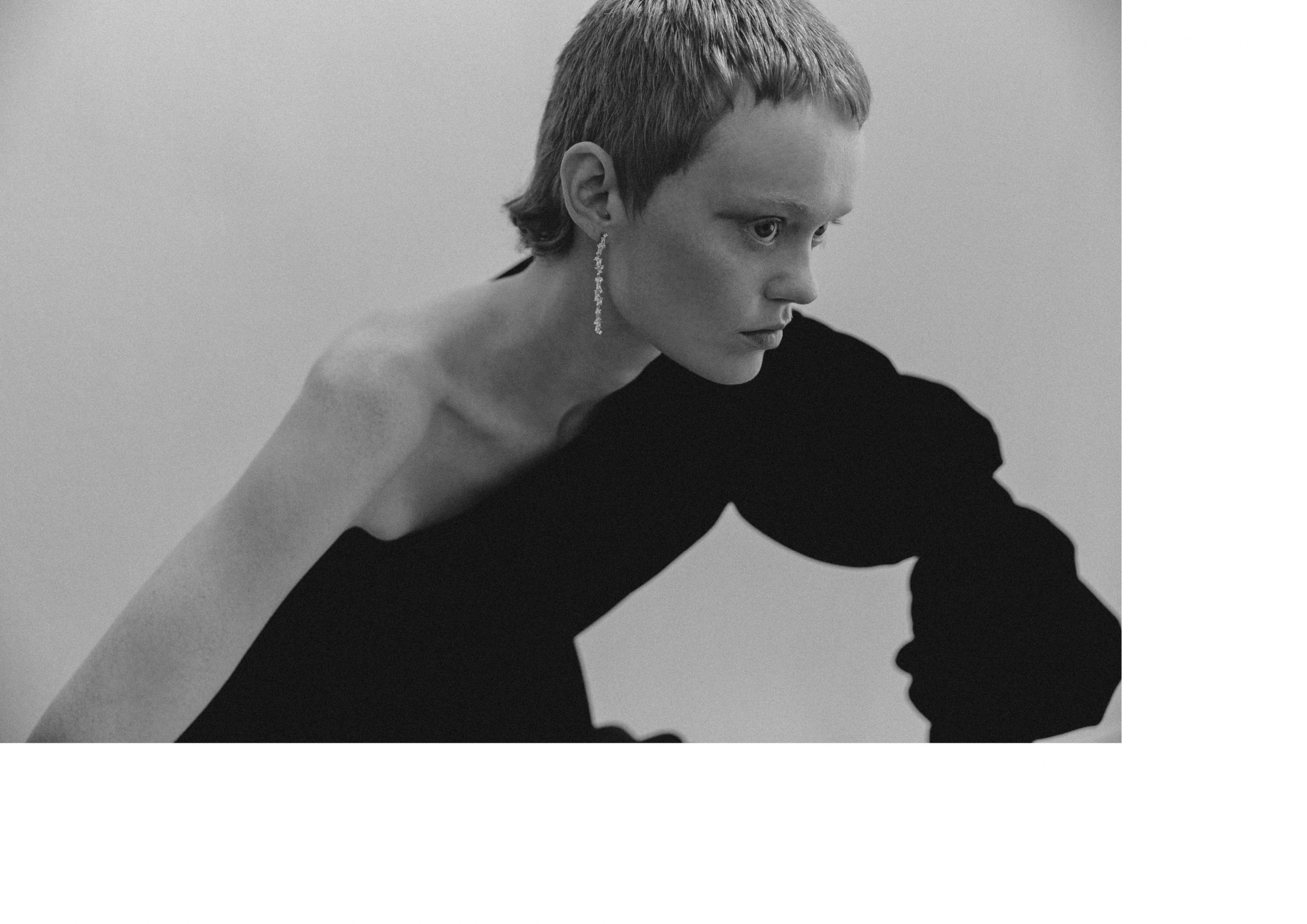 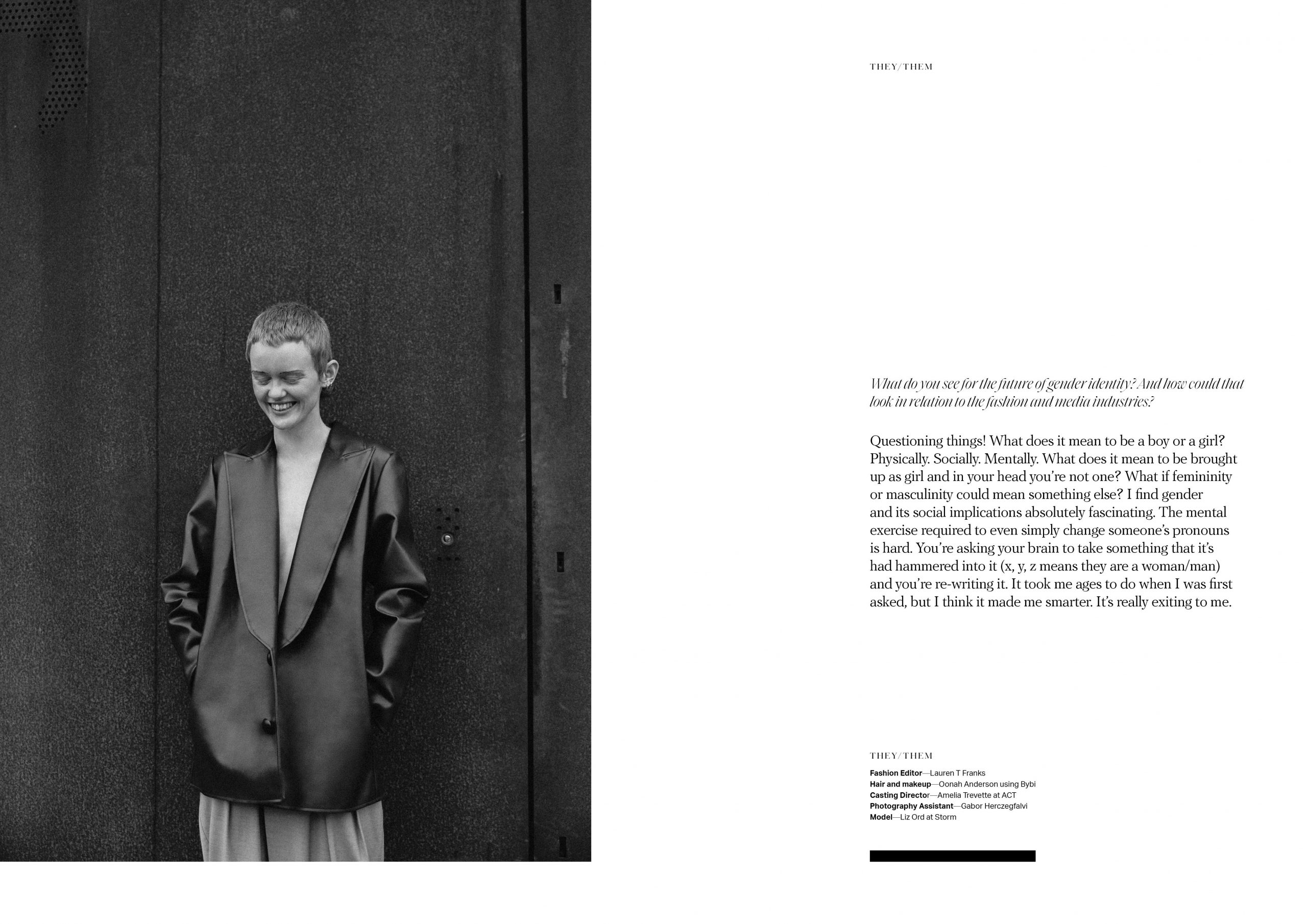