The Biker with a Leica

Situated on Stratton Street, Mayfair, a short stagger from Piccadilly, Langan’s Brasserie opened for business in October 1976, a joint venture between superstar actor Michael Caine and Irish restaurateur and bon viveur Peter Langan. They thought that London needed a restaurant with a more relaxed bohemian atmosphere along the lines of La Coupole in Paris. They were joined a few months later by Michelin-starred chef, Richard Shepherd. Art lined the walls and the menu featured a David Hockney drawing of the three owners. Almost immediately following the first chink of cutlery and pop of a champagne cork Langan’s became the ‘in place’ to eat and to be seen to eat.

Meanwhile, out on the mean streets of London Town, a young leather jacket-clad East End lad with a massive Harley Davidson and the chutzpah to match was beginning to make his way as a paparazzi photographer at a time when the average soul would probably have guessed that a paparazzi was some kind of pasta.

Langan’s and Richard Young were made for each other and for the next decade-or-so it seems that every celebrity of note who passed through London also passed through the brasserie’s neon-lit swing doors – and Richard was on hand to record their comings and goings, a more or less permanent fixture at the bar sipping orange juice and waiting to grab his Leica camera, leap into action and capture a ‘star’ moment.

The original Langan’s, after a slow decline, finally fell victim to the curse of Covid but to coincide with the post-pandemic reopening, now under entirely new management, Richard and his wife Susan have delved into his massive archive of negatives and produced ‘Langan’s Brasserie. This photobook is a fond tribute to the venue in which he spent so much time and which helped forge his reputation as a society photographer. An abundance of Hollywood royalty, blue-blooded European royalty, rock’n’roll’s elite, stars of sport, theatre and the arts and beautiful people from the world of fashion feature, snapped by Richard during his nightly vigils.

Followers of fashion will wince at the wildly extravagant leather jacket worn by Sean Connery, just pipping Michael Caine’s next to him, or the oh-so-seventies white jeans tucked into knee-high boots and shinny nylon pit-lane blouson sported by Richard Harris. The gorgeous blonde on his arm was clearly not deterred by his taste in clothing. And all liberally sprinkled and spiced with shots of Peter Langan in various stages of inebriation and varying degrees of intimacy with his diners. A feast of fun.

Richard Young stumbled almost by chance into photography as a profession when a journalist friend asked him to take some shots of a young man and his girlfriend who were staying with him. The teenager turned out to be John Paul Getty III, recently released by kidnappers – minus one ear – after his grandfather, then the richest man in the world had paid more than £2 million in ransom. Richard’s friend suggested that he should try and sell the shots to the Evening Standard, who duly grabbed them and paid him £30. Assuming that he was professional, the Standard started to call him to cover the odd event and Richard’s future career was fixed, if not yet assured.

His big break came when another East End boy who had done well as a photographer, David Bailey, asked him to be ‘social’ photographer for ‘Ritz’, a new gossip magazine modelled on Andy Warhol’s ‘Interview’, the first issue of which was published only two months after the opening of Langan’s. This offer was a young man’s dream and involved covering as many star-studded parties and gatherings as possible – all for no money – but who cared?

Richard worked for Ritz for the best part of a decade attending all the best parties in town. As it happened, most of the editorial meetings between Bailey and cofounder David Litchfield were held in the bar at Langan’s with Richard often invited to join them. Ritz was a turning point in his career, as a familiar face, he gradually morphed from an outsider, slipping his way into parties, to an insider, welcomed aboard and often the only photographer there.

Richard: Remember no one ever got paid on Ritz. I didn’t get a penny for the 7 or 8 years I was there but I did get all the intros I could possibly want for all the parties and events where I would be the only photographer. Loads of parties at Mr Chows, San Lorenzo’s and Langan’s. Ritz magazine was a very, very important tool for me and Bailey was fantastic and we had a great relationship then and we still have it now. I love the man very much.

Peter Langan was the archetypal loveable drunk, notorious for falling asleep at the bar and not infrequently falling off his stool. While at carpet level he was known to crawl under diner’s tables and nibble at the ankles of a lady or two and often offered a free meal to women to strip off in the restaurant (a few actually did). Much of Langan’s buffooning – and occasional mooning – was captured by Richard’s camera.

Langan would not have survived more than five minutes in today’s PC world but these acts of theatre, and Richard says that they were quite often just that, acting, were all part of what created the Langan’s Brasserie’s reputation as a lively, exciting and hedonistic place to have a good time – and the food was good too.

Tragically Langan died in December 1988 as the result of a fire at his country home. Micheal Caine also sold his interest and the buzz gradually faded away.

Make: Richard, you seemed to be everywhere on any given night and I can see why you needed your Harley to get around. What time did you get to bed?

Richard: Most evenings were a continuation of the rest of the day as I would probably be out and about but then I’d go to one event that went on from 6.30 to 8.30, then a later one that went on to midnight, then you’d inspect the restaurants, Langan’s of course or San Lorenzo’s, maybe Annabel’s, but because you were shooting film in those days you had to drop it off. So I would drive over to Fleet Street and depending on what time it was, up to about 2.00 in the morning, I would process the film myself in drop tanks, hang it up and leave a note for the darkroom staff to make contact sheets and send down to the picture desk – and then, religiously, the next morning around 10.00 it would start all over again. I would go over to the Express and hassle the picture editor to get the shots in the paper.  Now of course you can’t do that as it’s all digital with pictures coming in from all territories of the world and there’s no more loyalty and camaraderie between picture desks and picture editors and photographers.

Make: It must have been a punishing regime for you.

Richard: It was. Although the London social scene in those days, between about 1976 and 1986, was much smaller than it is now, less locations to get around. You couldn’t cover all the places now. I’ve been doing it for 48-years, 42 of which were hanging around waiting for something to happen and six actually working.

Make: That sounds like Charlie Watts’ observation of being the Rolling Stones’ drummer – and that’s a lovely picture of him and his family in the book.

Richard: Yes, what a lovely man. All my conversations with him were about clothes. I used to say to him, ‘One day I’ll be able to afford a suit at Huntsman or Anderson & Sheppard.’

Make: Hackney, where you grew up, has changed so much since your childhood. Do you ever go back there?

Richard: Not that much in recent years but a friend drove me past where I grew up a few months ago. I had a most incredible childhood – my parents were beautiful, my Dad was my best friend and taught me the fundamental lessons as a kid, be polite, say please and thank you, and if there’s a door go through it, they can only ask you to leave, and that’s stood by me all my life. What are they going to say? They can only turn around and say would you mind leaving. And without being rude or obnoxious just turn around and walk out. Don’t say a thing.

Make: How many times were you asked to leave?

Richard: Strangely enough not that many times. My first was when Elizabeth Taylor threw me out of the Dorchester in 1974 after I had gatecrashed Richard Burton’s 50th birthday party and grabbed my first major photo that went around the world. The secret is if you know you have the pictures in the can don’t argue, don’t say a word just turn and walk and get the film out the door before they ask for it.

Make: There’s one shot in the book, of the three owners, that unlike all the others was deliberately posed. Tell me about that.

Richard: Well, that was taken upstairs in the Venetian Room and it was based on the David Hockney drawing on the top of the menu. Peter Langan and Richard Shepherd were always available but I had to wait three or four months to get Michael Caine to sit down and pose in the same way because he was always away filming. I shot it available light on a Leica M4, no flash, which would have made it look too artificial, and it worked out really well.

The day before we spoke Richard had been to the reopened Langan’s for lunch with Peter Langan’s widow, Susan, and was full of nostalgia for the days and hours that he had spent there in the past – he even ordered his old favourite, Spinach Soufflé with anchovy sauce, which is still on the menu. (The menu, incidentally, in a nod to the past, still features the Hockney drawing of Langan, Caine and Shepherd.) Richard has laid claim to his old seat at the bar and said that he is going to try and persuade the management to get his name embroidered into the upholstery. For old time’s sake, he might even turn up one night with his Leica – not the Harley, though, as he hung up his helmet some time ago in the interest of safety. His own and the public. 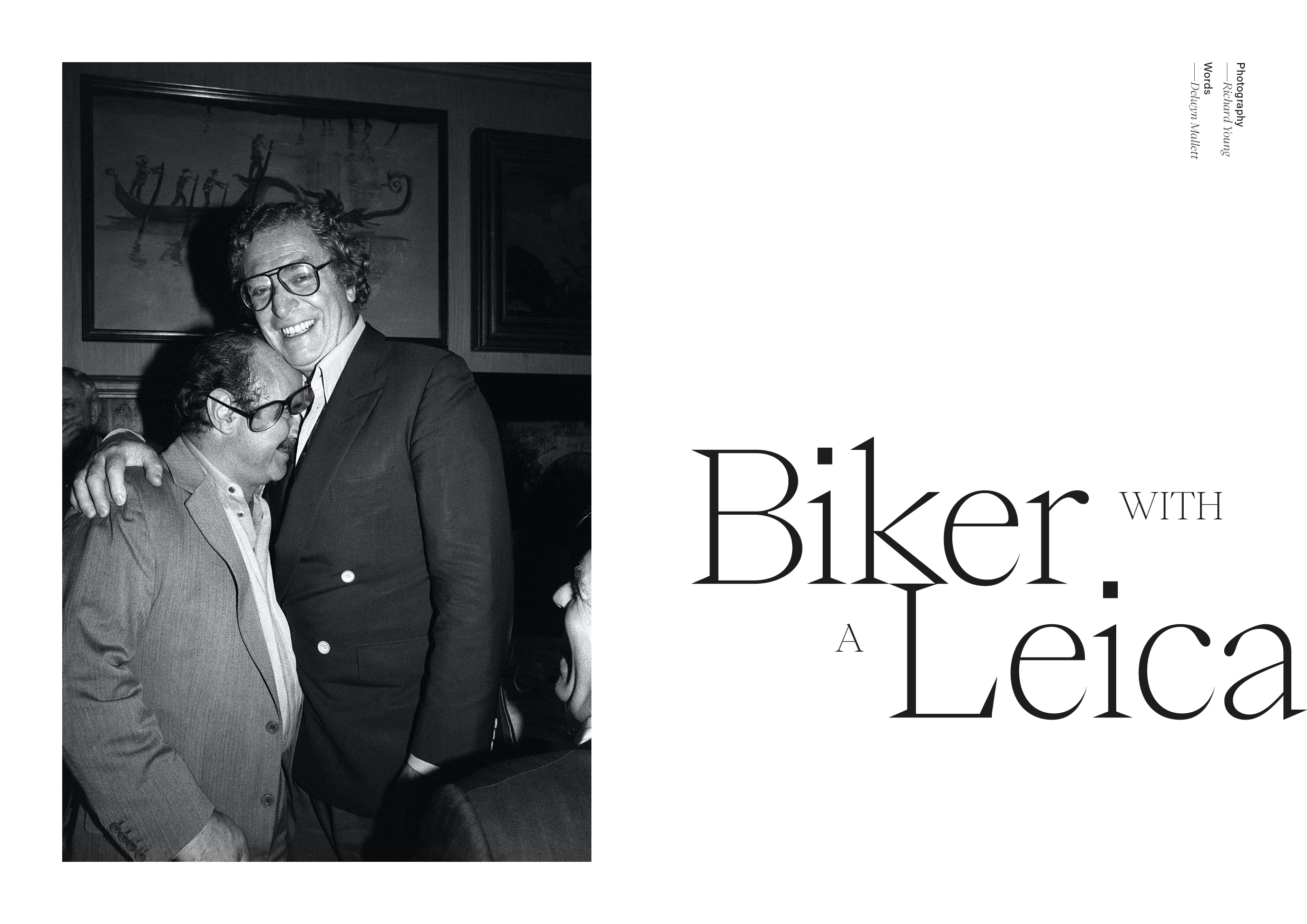 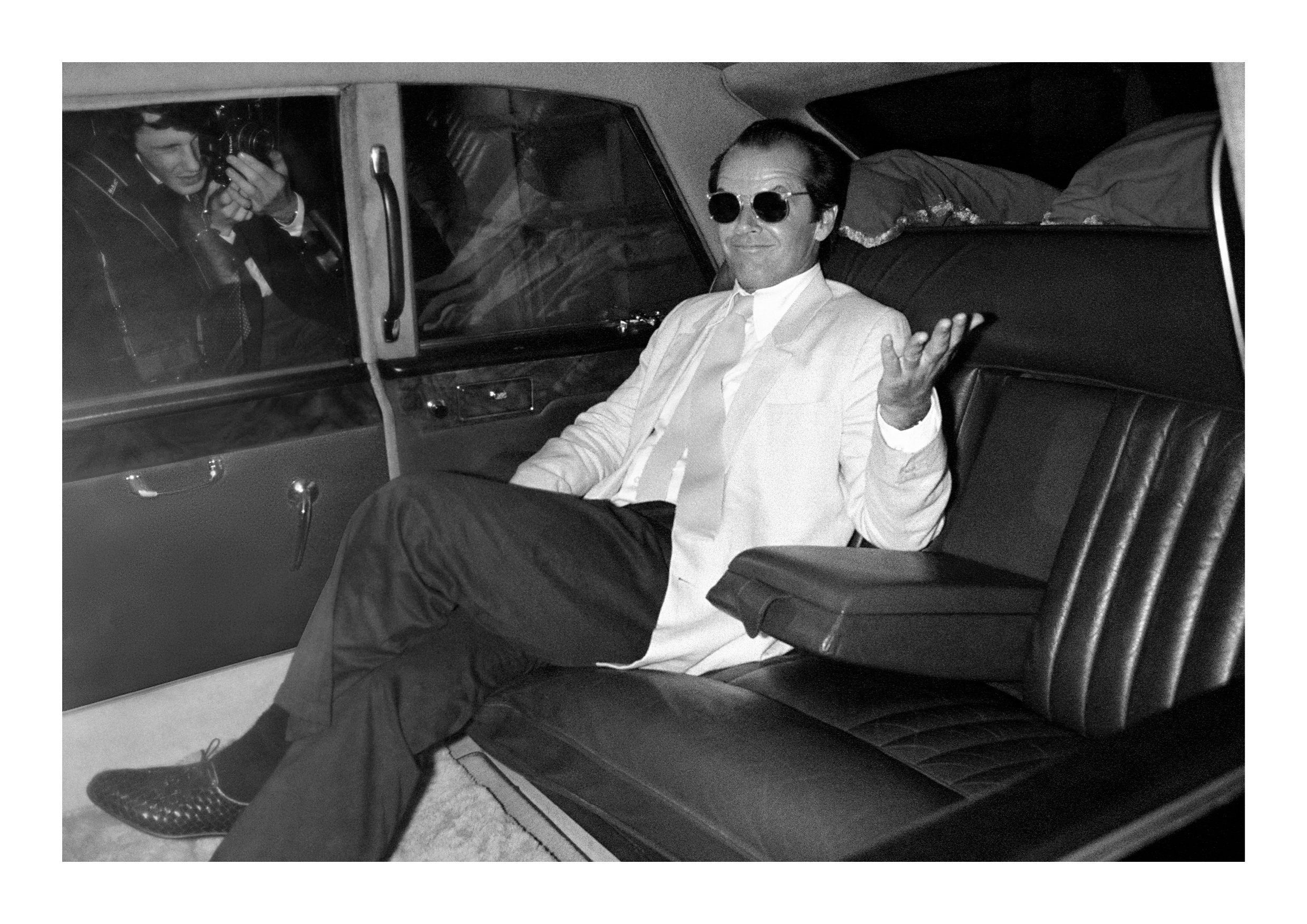 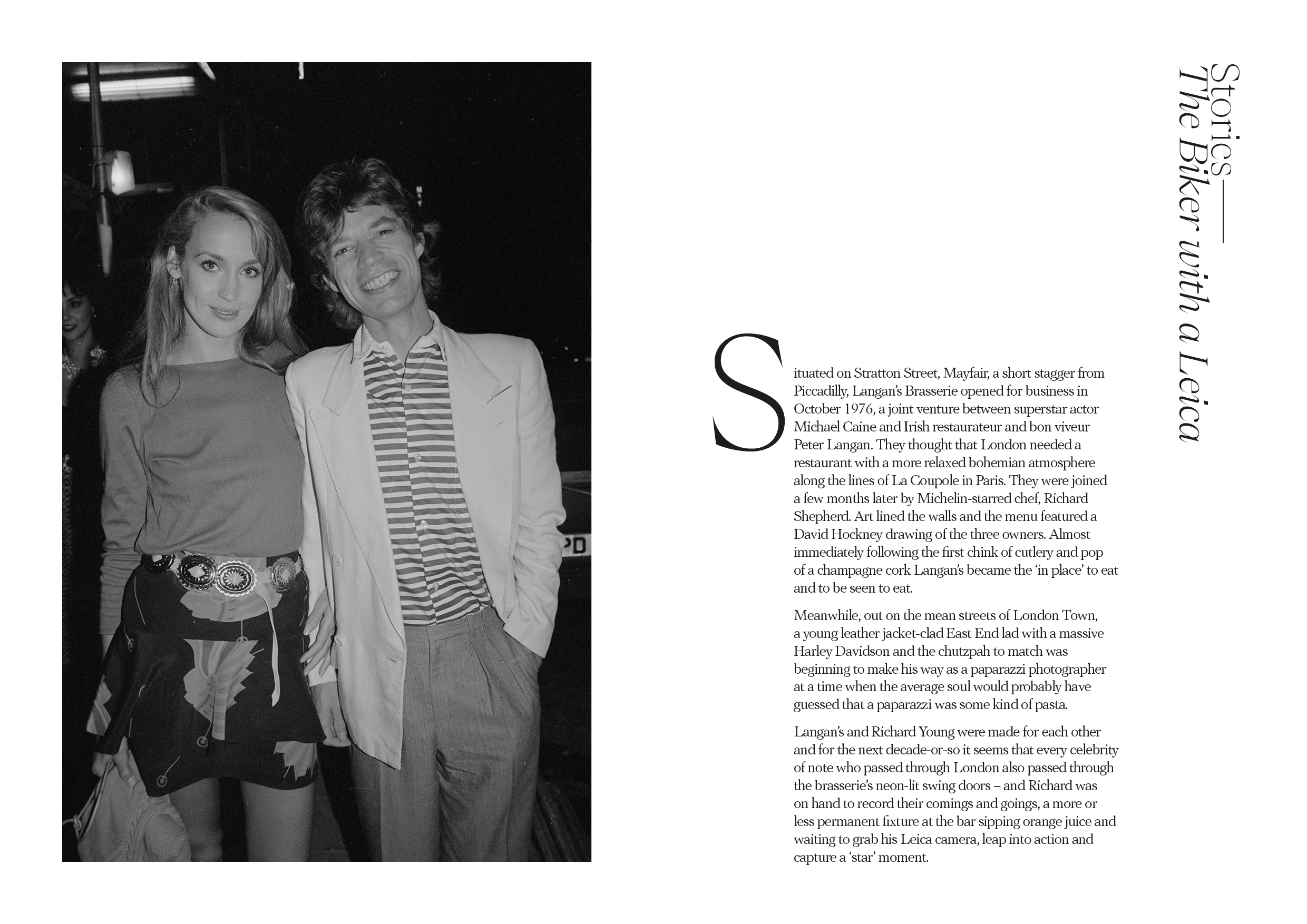 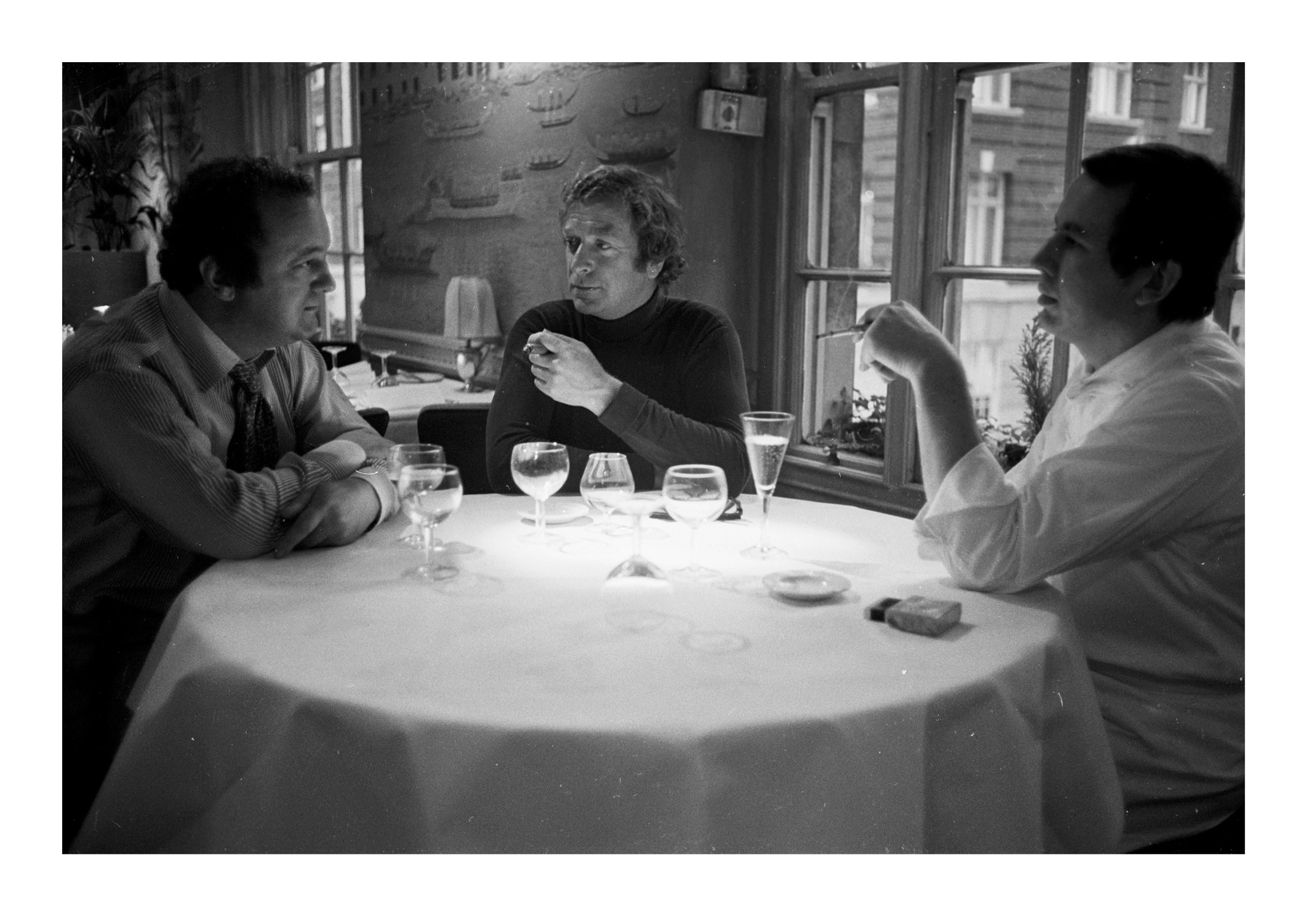 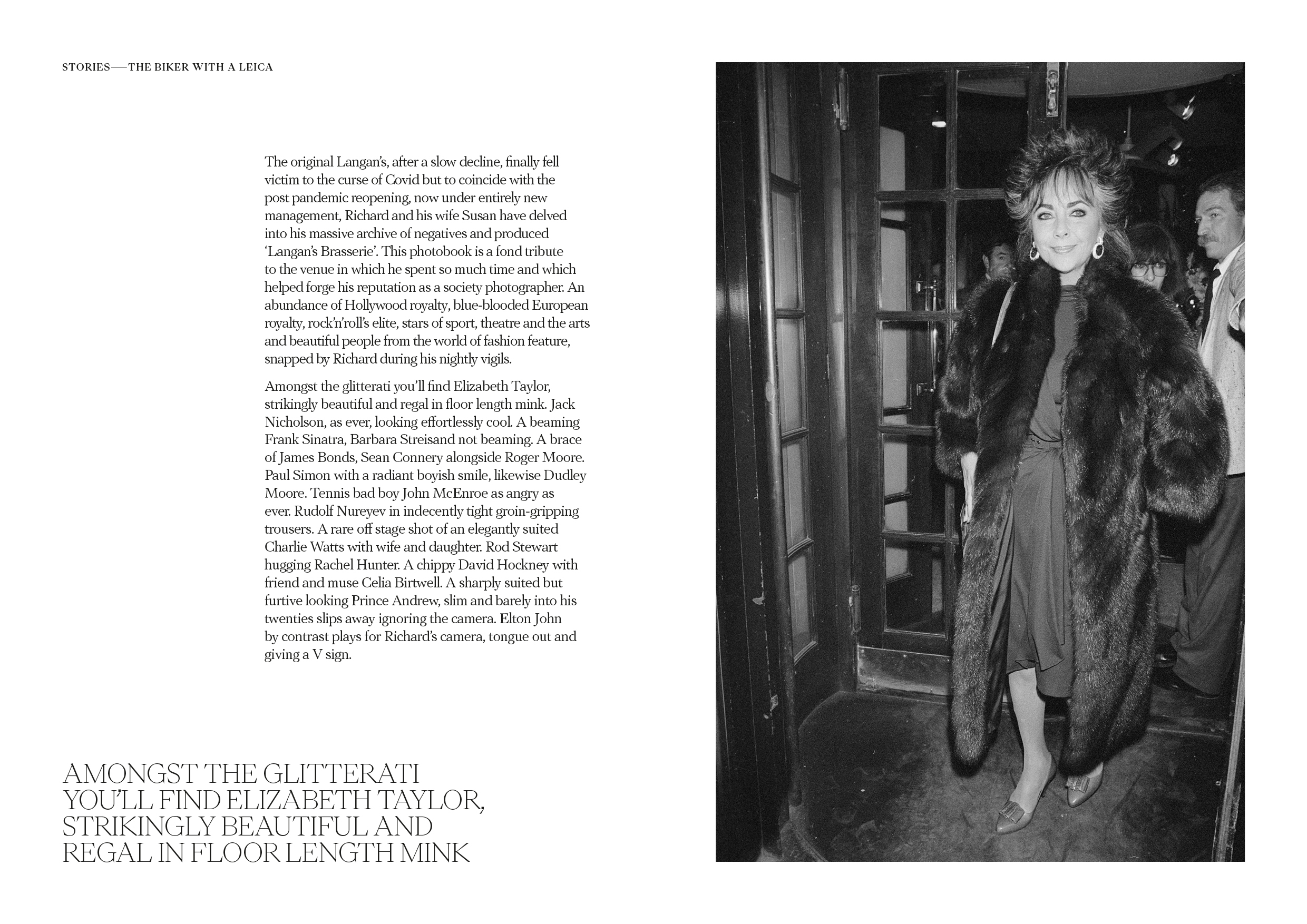 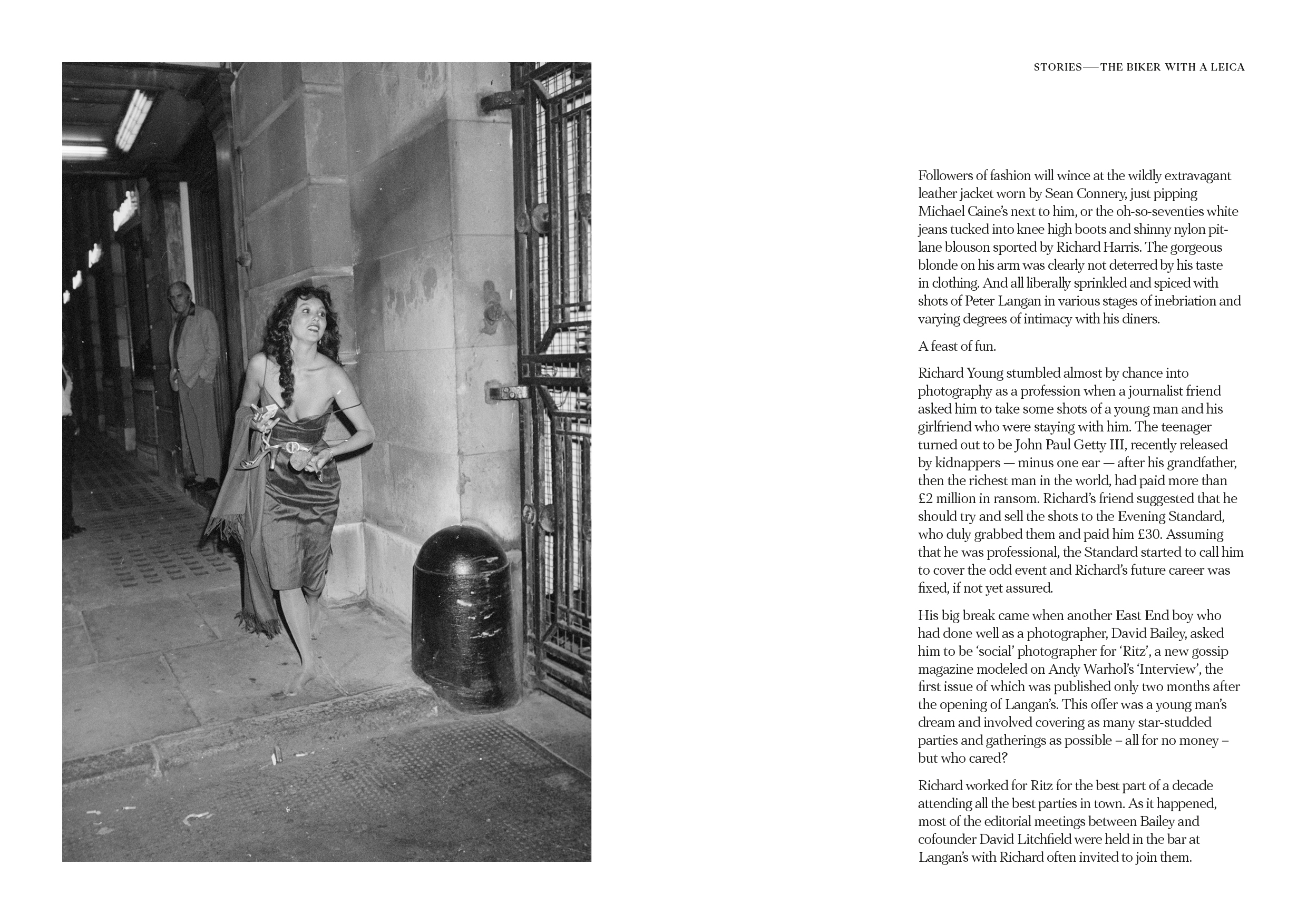 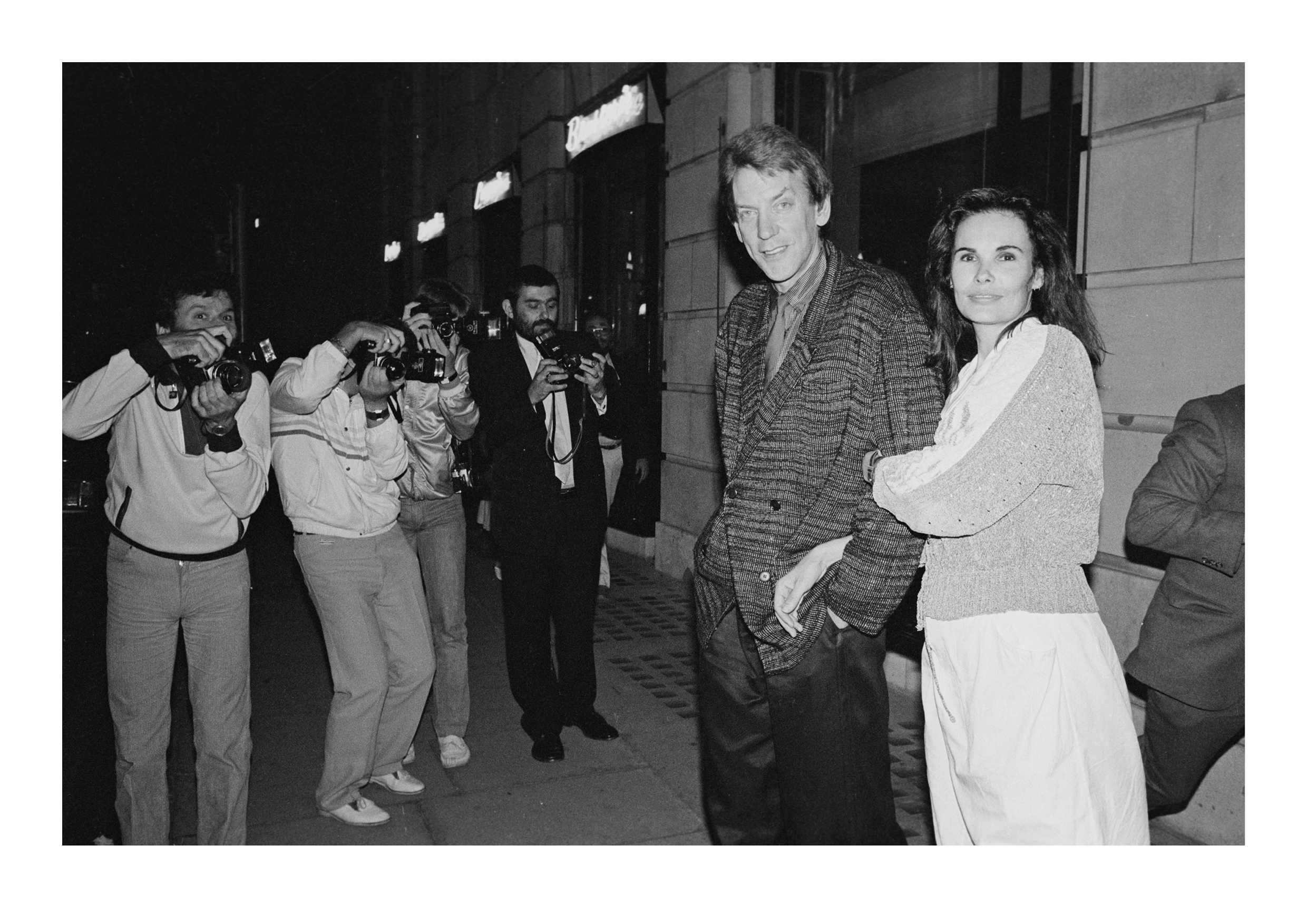 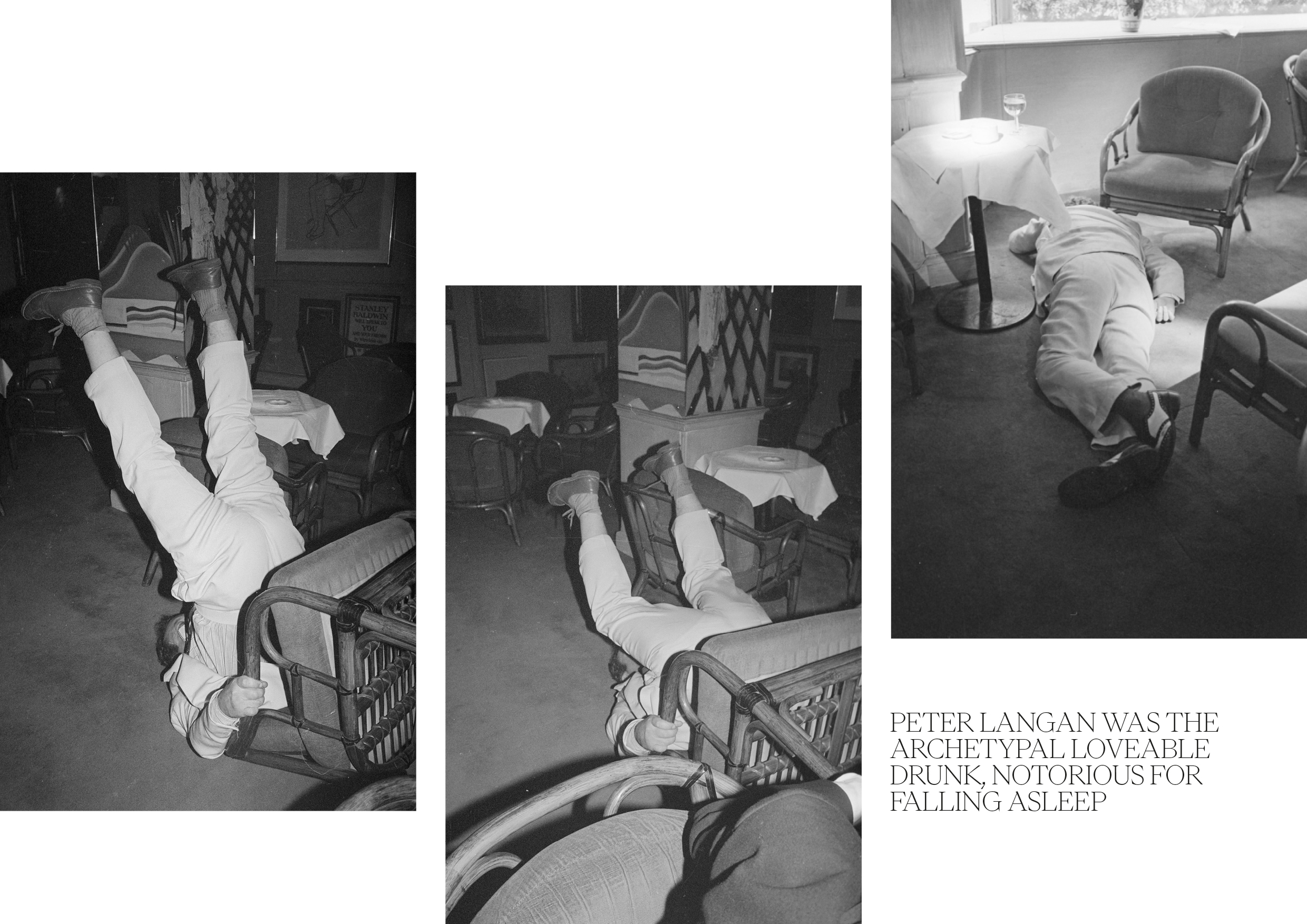 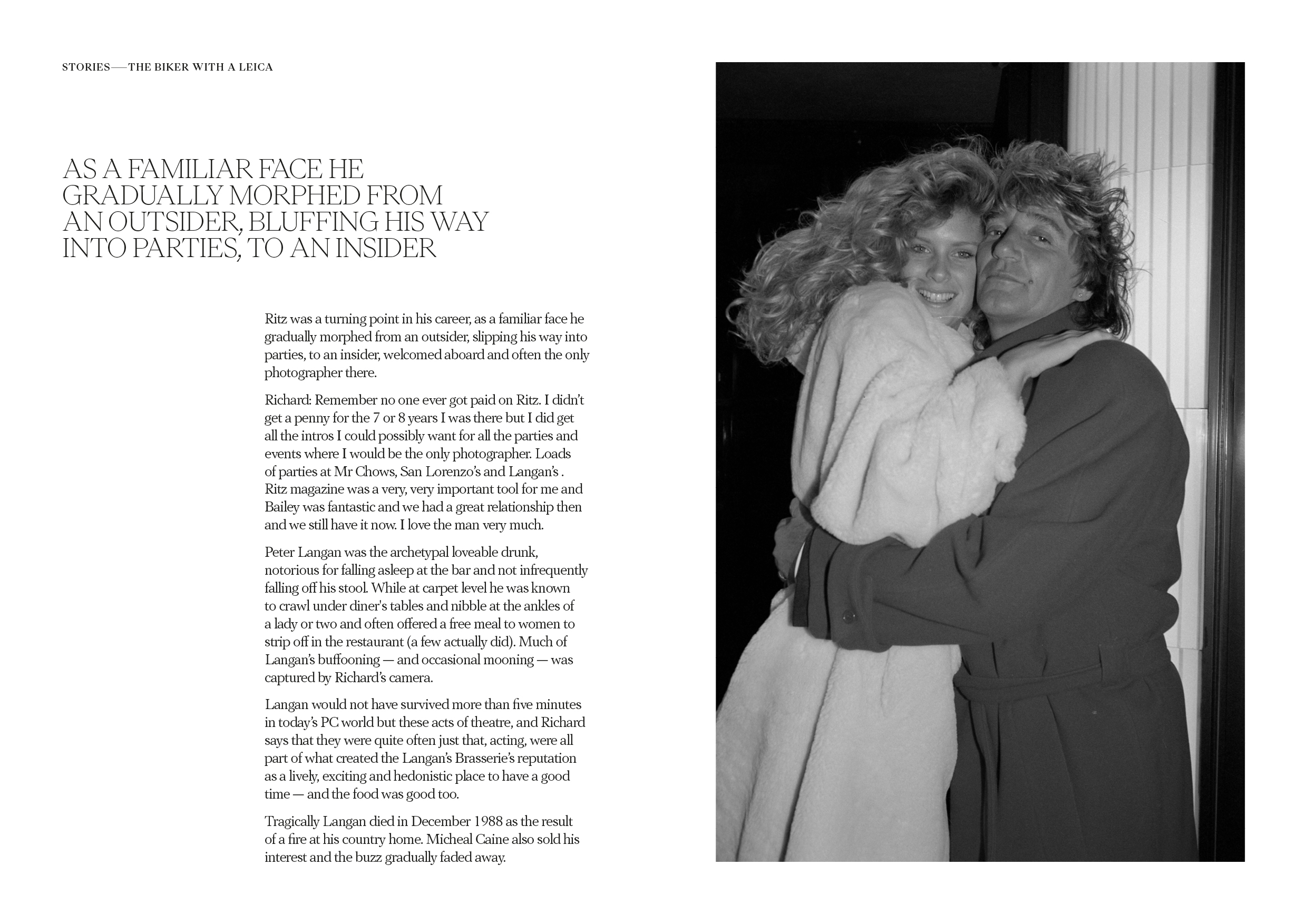 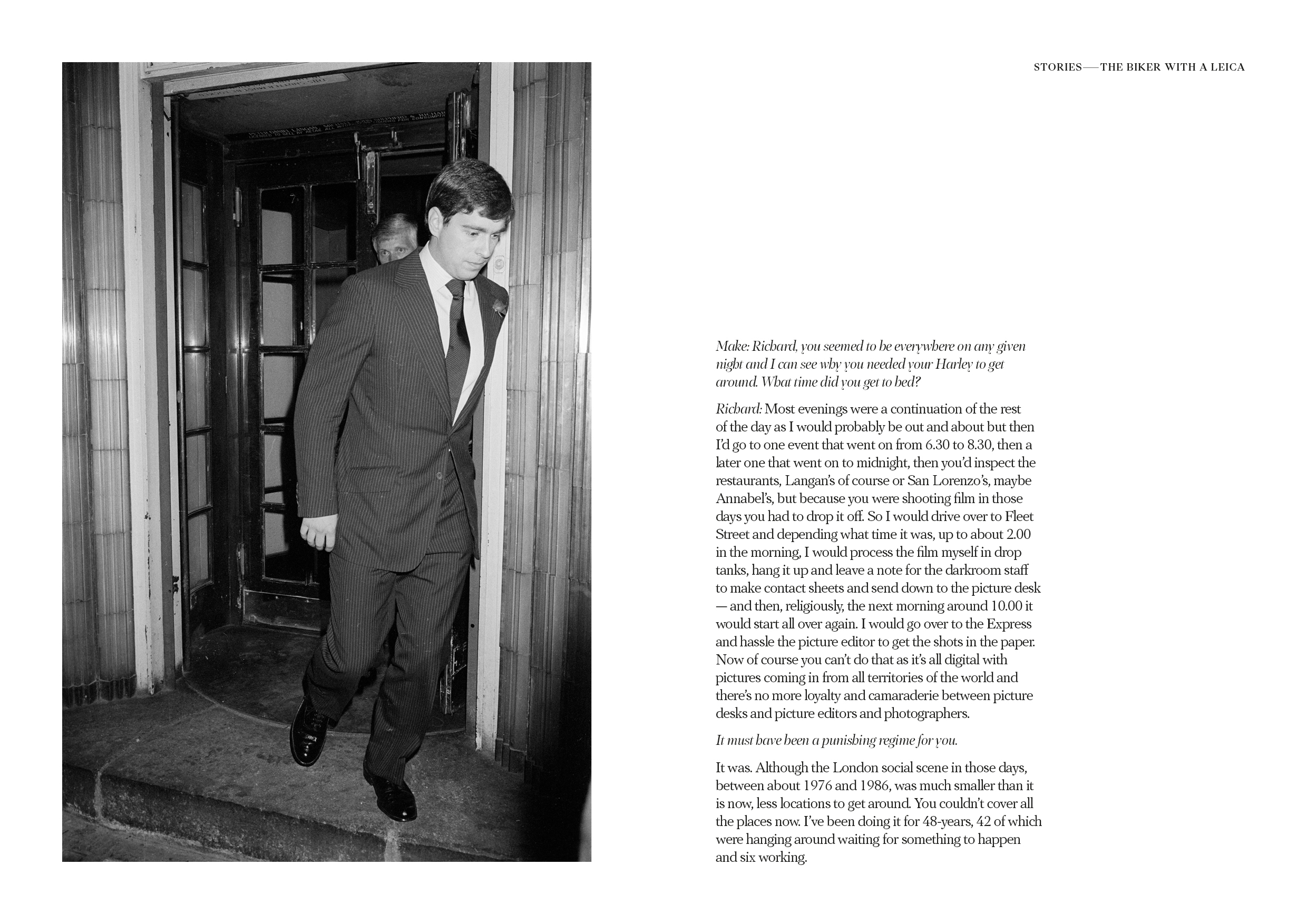 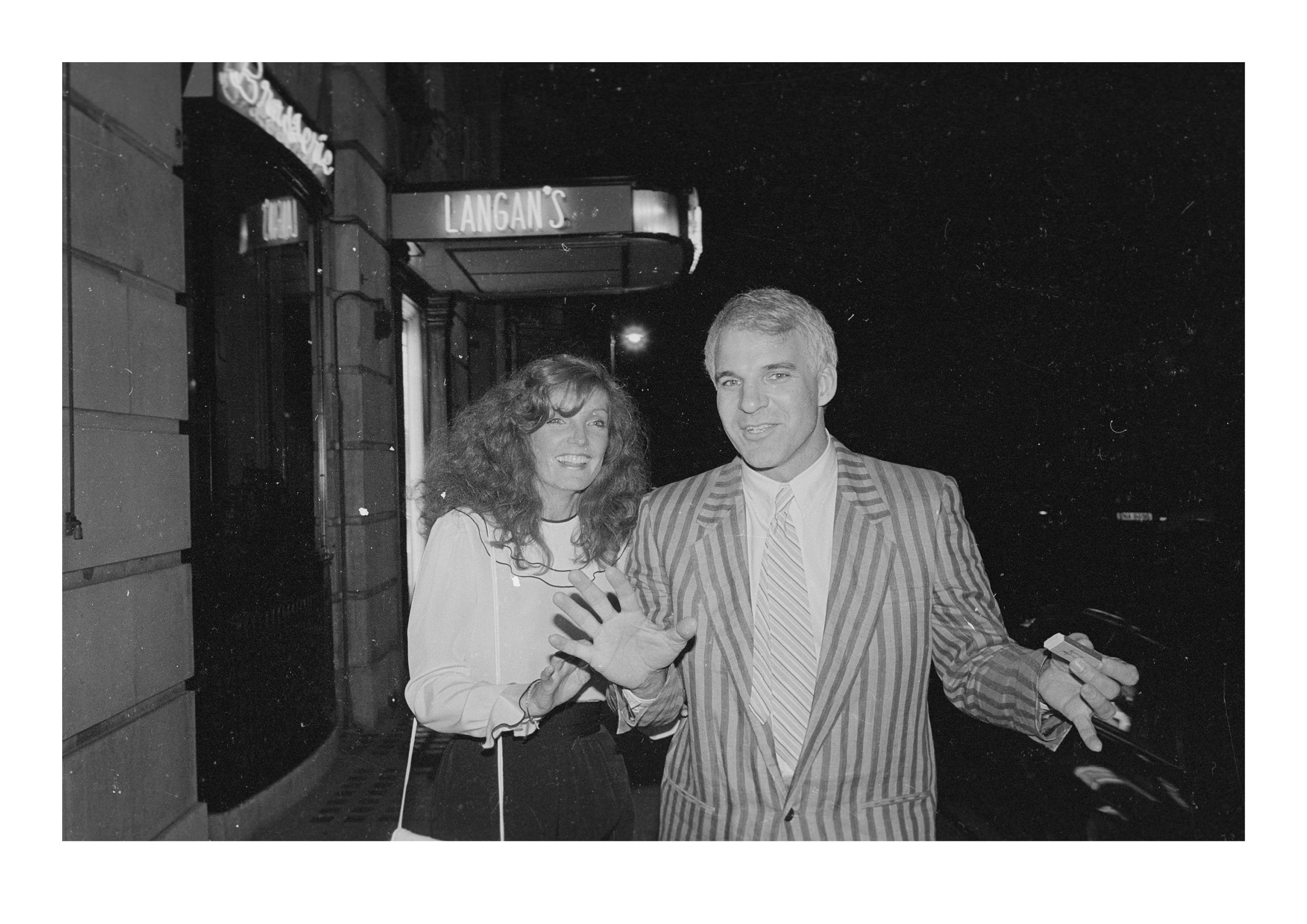 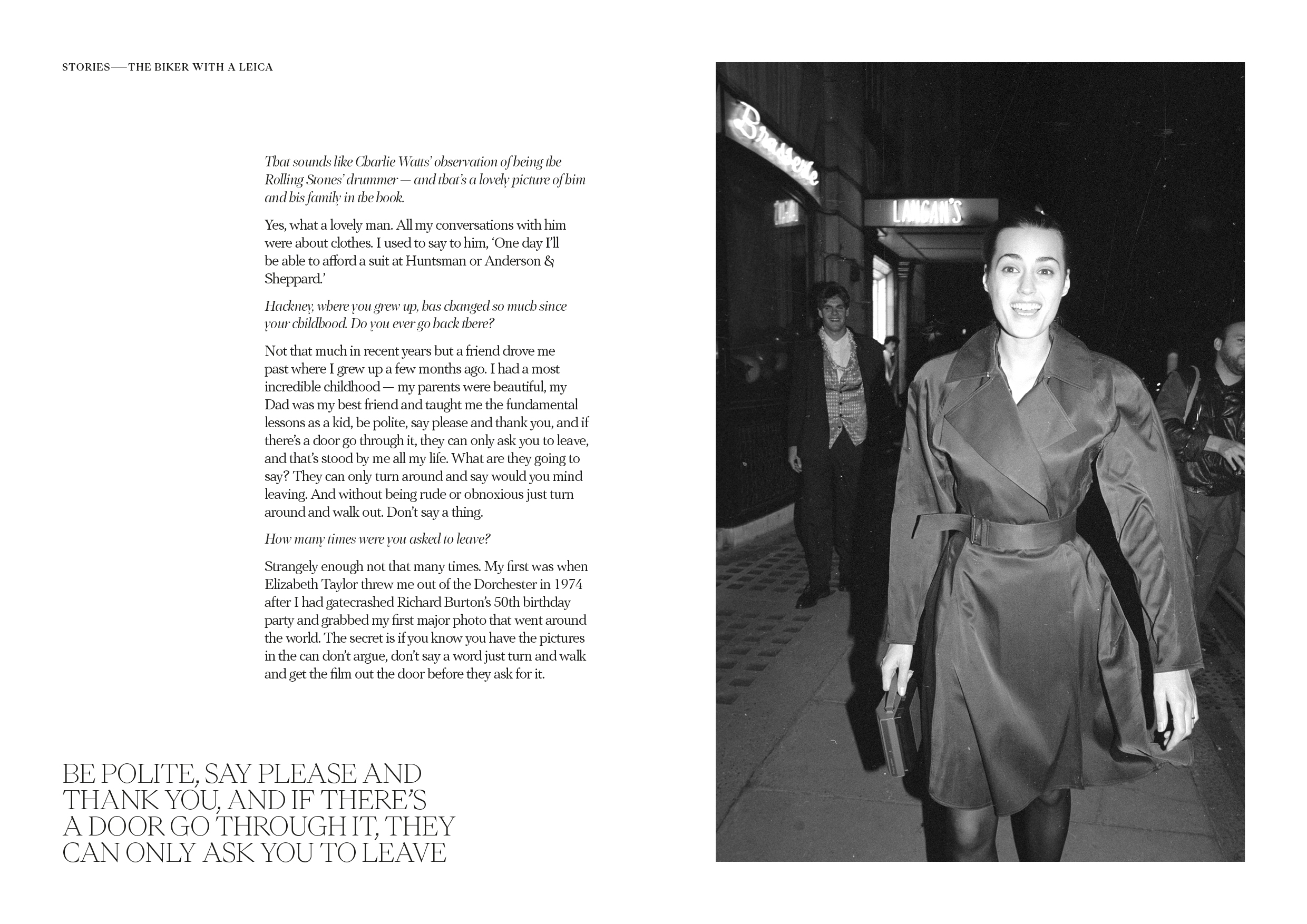 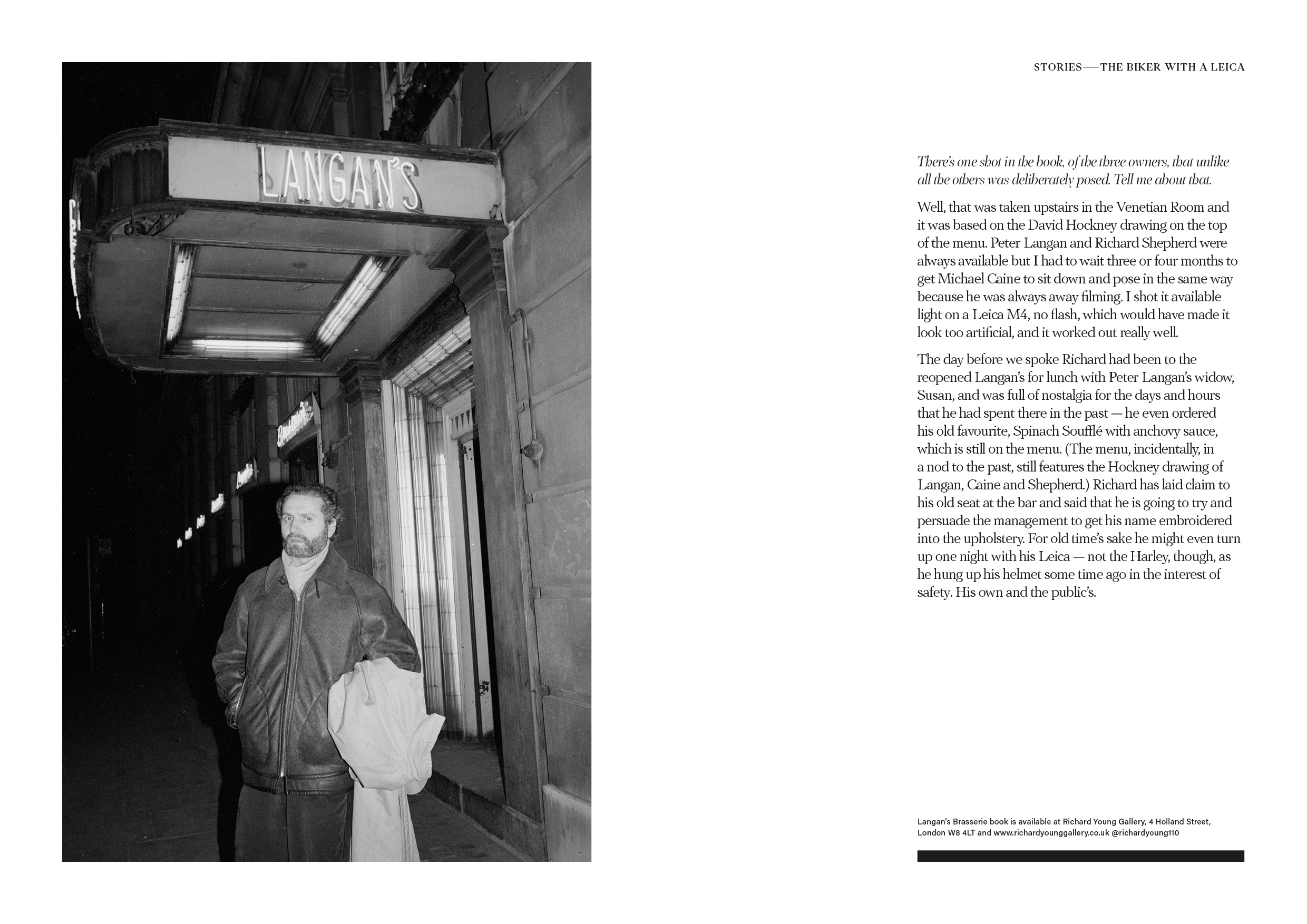