Modern love is an old-fashioned romance.

Dating Apps, Robot Brothels and ‘Teledildonics’ Have given us more choice, more freedom and greater access to sex than ever before. But has that stopped us seeking a plain, old-fashioned ‘happily-ever-after’?

Fancy a shag? Well, what are you going to do about it? Spray on some CK One and head down your local, approach someone half-decent looking and flick your hair until they buy you a rum and coke? Or pick up your phone, and with a sideways skid of your thumb, find a few hotties in your area, send some texts and see who’s up for it?

It’s easy to see how technology has transformed the dating landscape. Gone are the risk of awkward silences and mistimed advances. It’s more fun to scroll through a digital Rolodex of handsome faces and gleaming torsos, all pumped and eager for your reply, then it is to go to a party of the school friend you randomly bumped into on the Tube, and spend the evening trying to extract yourself from a conversation with a newly-divorced process manager. Who wants to sidle up to someone in a nightclub only to find out they are married? Or weird.

Technology and dating had an uneasy start. Back in 1995, when Match.com launched, online dating was still having a hard time shifting the lingering odour of the first digital chatrooms: sweaty, dimly lit places of extramarital affairs, and balding men in rumpled T-shirts praying on innocents experimenting with the first fizzing of their loins. Then in 2000, smartphones came on the scene. In 2007, the first iPhone launched. Suddenly, the dating pool sat in our pockets. A potential one night’s stand could be found while you were waiting for the bus.

Taylor Bell, 32, is just one of the gazillion people around the planet to hop on the online dating bandwagon. Bell says she uses dating apps because her mates are all in relationships and she struggles to find available men outside her social circle. “No one goes up to each other in bars anymore, so if you want to meet someone outside your social circle, you go online. I don’t use Tinder because it has a rep for being just about sex, which feels quite seedy — though I do know a lot of people who met on it. Bumble is good because the girl has control — she has to make the first move. There’s another one, Happn, which works by recognising if you live or work near each other.”

Bell says that there is an openness about the environment — everyone knows what they are there for. “Sure there are guys, and girls, just looking for sex, but you can eke them out pretty easily. There’s an unspoken rule that if you aren’t into the person you’ve met, you can leave.” Though of course, you never really know the person you are meeting — not like you would if they were a friend of a friend. I’ve had my share of bad experiences; a memorable low point was going back to the flat of a guy who was really good-looking, 6’5. He was well dressed but his place was a disgusting, filthy mess. The loo was so dirty I wouldn’t sit down. I was hovering over it, trying to pee, thinking what the hell am I doing here, when a French bulldog came in, sat down on the floor and sat there watching me, panting.”

Online dating is now such a significant part of our lives it has its own vocabulary (negging, ghosting). The average user spends about a whopping hour and a half on Tinder each day. Two years after it launched in 2012, it was already processing over one billion swipes per day.  But it’s not just the lure of love (or lust) that keeps us going back to them. If you are spending 11% of your waking hours cued into a dating app, you aren’t desperate. You’re addicted.

“Dating apps are basically slot machines: there’s the promise that you’re going to find something good, and every once in a while you get a little positive reinforcement to keep going,” says David Greenfield, founder of the Centre for Internet and Technology Addiction and a professor of psychiatry at the University of Connecticut School of Medicine. Their use activates the release dopamine in our brains, a natural chemical that we also experience when we play a computer game, take heroin or have really banging sex. “Dopamine is a powerful neurotransmitter,  it’s wired into the circuits of survival like eating and sex, so you’re talking about going against something that’s been biologically evolved in the brain for tens of thousands of years,” he says.

So if all this exhilarating, no-strings bump
and grind turned us all into superficial sex addicts, incapable of committing to anything longer than the lifecycle of an iPhone before its next upgrade, it’s hardly our fault, is it? Even if you aren’t hooked on dating apps, the pressure to get married, have babies, go on amazing holidays, is perpetually reinforced by social media. “You are constantly seeing how everyone else is presenting their most perfect lives, and that
has a massive effect on self-esteem and confidence,” says Kate Moyle, a psychosexual therapist.

We’re never satisfied, says Moyle, and always on the search for an ephemeral idea of perfection, forever kissing new frogs. And even when we’ve found our princes, technology gets in the way of true emotional bonding. “It’s a bit like when you see a couple at a restaurant, Instagramming their food instead of actually enjoying their dinner. We’re missing out on intimacy, something we need instinctually from a very young age. As babies, we connect and are reassured by touch and eye contact. When you think of a couple in the first stage of their relationship, there is lots of touching and flirting, lots of reassuring eye contact.”

However, instead of suggesting that the only answer to a meaningful relationship is embarking on a full-grade digital detox, Moyle is utilising technology to deepen bonds between couples. She, and San Francisco-based business partner Darren Smith have created an app called Pillow. Like meditation apps, such as Headspace, Pillow uses technology to give us a break from technology. The idea is that the app guides you through sessions of eye to eye contact, creating a moment for a couple to put aside their busy lives and just focus on each other. This might sound old-fashioned but, in the digital space, it’s brand new.

Just as we can say goodnight to someone face-to-face on the other side of the planet, soon it will be commonplace to feel that person too. Far from sad humans forging relationships with computers because they can’t get a real relationship of their own, technology is already helping us make, keep and reinforce our partnerships.

Or how about robot sex. If you fancy a threesome with your fella but don’t want to risk an STD, having your wallet nicked, or just plain oppose prostitution (not an industry exactly known for equal rights), the world’s first robot brothel opened in Barcelona earlier this year. Lumidolls are “completely realistic dolls, both in the movement of their joints and to the touch, that will allow you to fulfil your fantasies without any limits,” says the website. You can order one of four robots (all female), as standard, in three scenarios: Executive, School Girl, and, oddly, Fitness Girl. Katy, for example, is 170 cm (about 5’5”) tall with breasts that are “very realistic to the touch. Her lips are a strong complement to her penetrating gaze. She has everything to fulfil your every fantasy.”

Katy looks like every teenage boy’s idea of ‘sexy’: massive tits, tiny waist, blowjob-ready lips, vacant expression. Ickily, the website adds, “you’re the one that sets the limits”. If you’re interested, her rates start at a very reasonable Euro80 (about £72) for 30 minutes to the home service for euro240 (about £217). Couple sessions are priced on demand.

Bryony Cole, who runs the Future of Sex podcast, sees the huge potential of virtual reality to create more meaningful relationships. “To me, virtual reality is called the ‘empathy machine’ and if applied to sex education could be transformative,” she told Vice. com.” [Traditional] sex education still relies on the most archaic, irrelevant material and it hasn’t been updated for dates. It rarely even takes into account same-sex relationships. It’s crazy.” VR will enable people to practise navigating real-life situations, from dodgy nightclub encounters to finding a mate to co-habit with, happily ever after.

Futurologist Ian Pearson turns to the growing ability of artificial intelligence, which could be as simple as an app on your phone, to help people pick up on body language signals. “It’s possible that you could get a second opinion on a date from your phone — like having a girlfriend at the table. You can imagine that would be very helpful for people who weren’t very sure of their own judgement, and particularly useful for people who find social behaviour hard, for example people with autism,” he says.

I wonder, though, with all this technology helping us find, get and do better sex and relationships if we are missing the point a bit. All these checklists, apps and algorithms almost taking the guessing out of relationships. Isn’t there something inherently romantic and passionate about taking a punt? About falling in lust and then spending the rest of your lives batting it out, working at forming a steady connection, which doesn’t result in plate throwing over tea and toast every morning. After all, if it genuinely doesn’t work out, there is a 100% socially-acceptable get-out card called Divorce.

Because, despite the gimmicks and gadgets once the fancy toys have been wiped down and hidden from the cleaner, and the robot sex doll put
on recharge — what do we have left if we haven’t left anything to chance? Where’s the magic? Dan Jones has been editing the New York Times Modern Love column for eight years. “What’s changed [with technology] is that we are expected to know what we want in advance because that’s how we narrow down the field,” he says. “And the truth is, we don’t often know what we want. Dating apps have empowered
us to pre-select love when we really don’t deserve that power or know what to do with it.”

The good news, Jones suggests, is that because we marry later, the end result is typically on a firmer footing, more likely to last, to be appreciated (“after all those years of dating hell”) and at a time when both partners are more likely to be settled into careers and more aware of who they are and what they want. “But when it comes to the key ingredient of intimacy being vulnerable with another person we haven’t gotten any better. In fact, I think many of us have gotten worse, hiding behind our phones, or within casual sexual encounters where we never admit to what we’re feeling.”

So it sounds like we’re back at square one again. All we really want is to bump into someone on the street, look into their eyes and see fireworks. All these incredible leaps in technology will always help us fish in that huge ocean of ‘someones’, but it can’t do that much to help us harness that mystical, ephemeral, shot-in-the-dark, glorious serendipity that comes with finding ‘The One’. But, while we wait to find them online, in a robot brothel, or folding towels in the laundrette, we can have a lot of fun along the way. Technology definitely helps us do that. 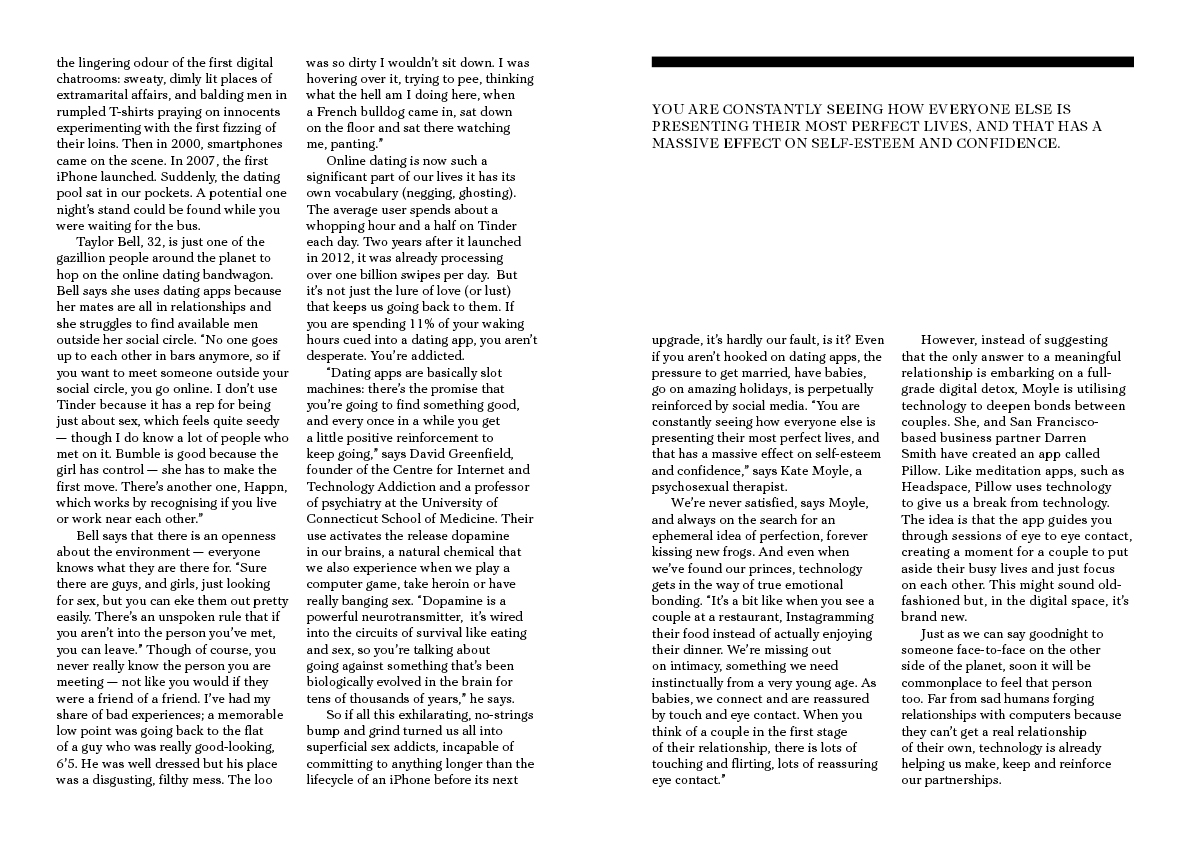 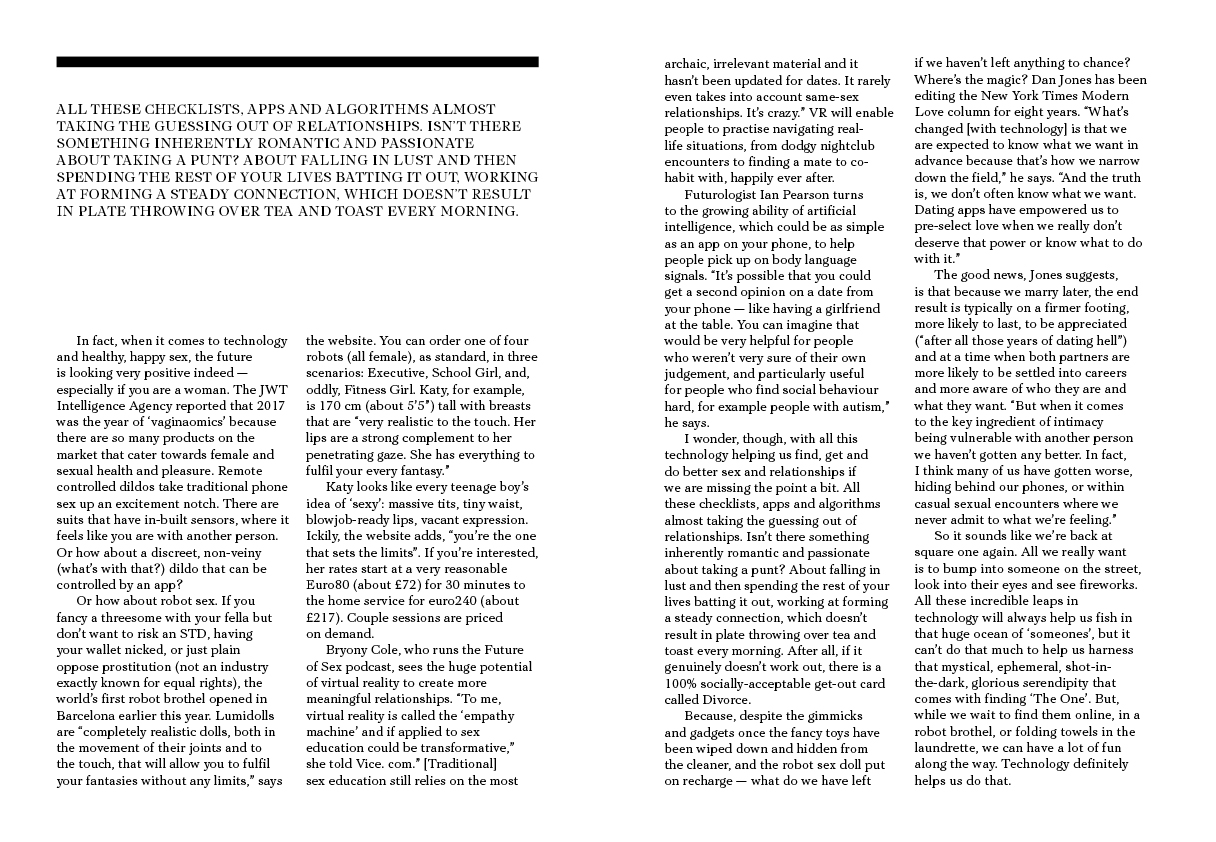