In the fifth of our Icons series, we discuss the timeless appeal of the Rayban aviator sunglasses.

As trend-setting style icons go, you would be hard pushed to find a less likely candidate than a 64-year old, corn-cob pipe smoking army general with a ‘comb-over’. But, in October 1944, when General Douglas MacArthur, commander-in-chief of the Pacific forces, strode through the surf onto Leyte beach in the Philippines, he did for Bausch & Lomb aviator sunglasses what, today, would require a multi-million dollar advertising budget and a star with the consumer appeal of a Hollywood A-lister.

MacArthur, former chief of the US Army, was coasting towards retirement in the Philippines when the Second World War landed on him. Forced to leave the islands by the invading Japanese he uttered the immortal words ‘I shall return’. And return he did. Two years later the lanky, media-savvy general, with newsreel cameras rolling and shutters clicking, waded ashore to reclaim the islands and the cover of Life Magazine.

From the ’40s onwards Bausch & Lomb’s Ray-Ban Aviators became the sun spec of choice amongst the affluent sporting crowd around the world, rivalled in popularity only by the same manufacturer’s Wayfarer, whose impenetrable blackness appealed more to those Hollywood and Mafia types who sought to see, without being seen.

It all began when Jacob Bausch, a German immigrant, started a tiny optical goods shop in Rochester, New York, in 1853. Soon after, he borrowed $60 from his friend and fellow immigrant, Harry Lomb, to fund expansion. By the turn of the 20th century, Bausch & Lomb had become a highly respected manufacturer of precision optical equipment and, before the First World War, became the USA’s first producer of high-quality optical glasses.

By the 1930s military pilots were spending more time at higher altitudes, flying in direct sunlight, and complaining of headaches and eyestrain and the Army Air Corps asked Bausch & Lomb to produce an effective glare-reducing goggle. Their design was a no-expense-spared, gold-framed classic of precision engineering that exceeded the army’s brief. Light in weight but rigidly reinforced by two bridge bars, the frames were strong enough to withstand the rigours of warfare while remaining slim enough to intrude as little as possible into the wearer’s peripheral vision. Suspended in this fine metal web were two eye-socket hugging, shatter-resistant shields of distinctive green optical glass, formulated to filter out 95% of eye-wearying ultra-violet rays. In 1937 Bausch & Lomb started to sell their military sunglasses to the general public under the inspired brand name Ray-Ban.

Over the decade’s countless variations and copies of the original design have appeared from hundreds of imitators.  Bausch & Lomb also created their own variations on the theme. In the 1960s movie ‘In the Heat of the Night’ Rod Steiger, playing a corrupt southern sheriff, gave the yellow-lensed ‘shooter’ glasses a boost, while the road-gang boss in ‘Cool Hand Luke’ introduced the world to the ever-so-sinister mirror-lensed version. But nothing quite captures the essence of masculine cool like a battered A2 flight jacket, faded khakis and a pair of original, G15 tint, green-lensed ‘Aviators’, even if it is only for a trip down to the local.

In 1952 Bausch & Lomb designer Raymond Stegeman started to experiment with hard plastic as a substitute for traditional metal frames. The result was the jet black Wayfarer, which rapidly became the shade behind which the Hollywood ‘set’ chose to hide its eyes.

It is thought that the Wayfarer, despite occasional dips in popularity, is the largest selling sunglass of all time. Film stars, rock stars, Jazz legends, presidents, dictators, Mafia bosses: The list of Ray-Ban Wayfarer wearers is seemingly endless but, ironically, the one star whom everyone associates with Wayfarers, the sublime Audrey Hepburn in the 1961 movie ‘Breakfast at Tiffany’s’, was actually wearing lookalike but oversize Oliver Goldsmith Manhattans.

By the 1980s, and despite a blip in sales created by the popularity of the Dan Aykroyd and John Belushi movie ‘The Blues Brothers’, Wayfarers had almost disappeared from the sales charts and were on the brink of being discontinued.

In a last attempt to revive their fortunes Bausch & Lomb, in 1982, engaged the services of a Burbank-based product placement company who went into overdrive. A stream of film and TV appearances followed in the next few years that once again catapulted aviators back into the limelight. By the time of Don Johnson in Miami Vice and Tom Cruise in ‘Top Gun’ sales had soared to 1.5 million a year.

In 1999 Bausch & Lomb sold its Ray-Ban brand to Italian Luxottica Group, production moved to Italy and China, and another great 20th-century American cultural artefact ceased to be American. Ray-Bans still look great but sadly for cultural purists they are no longer ‘Made in the USA’ 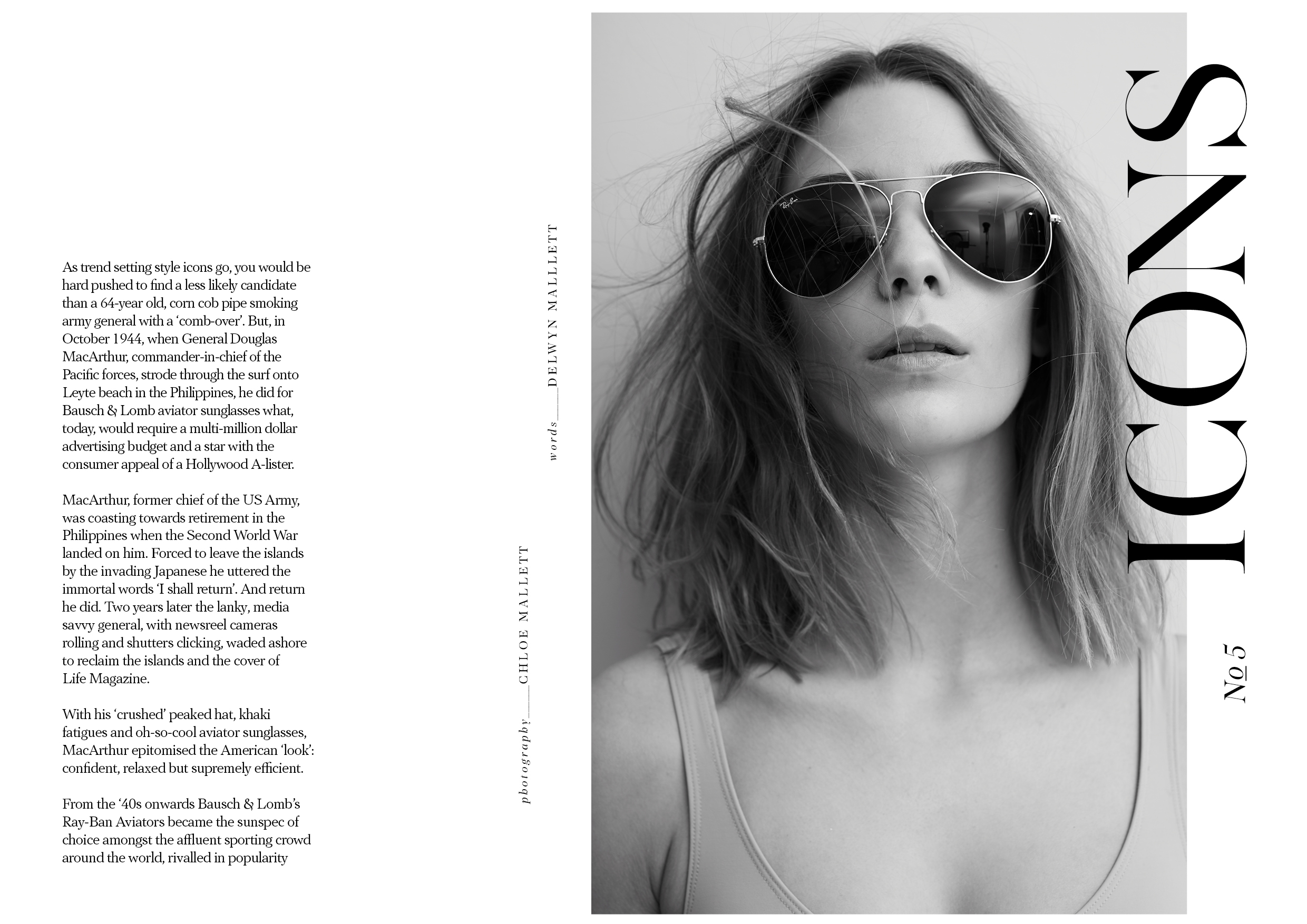 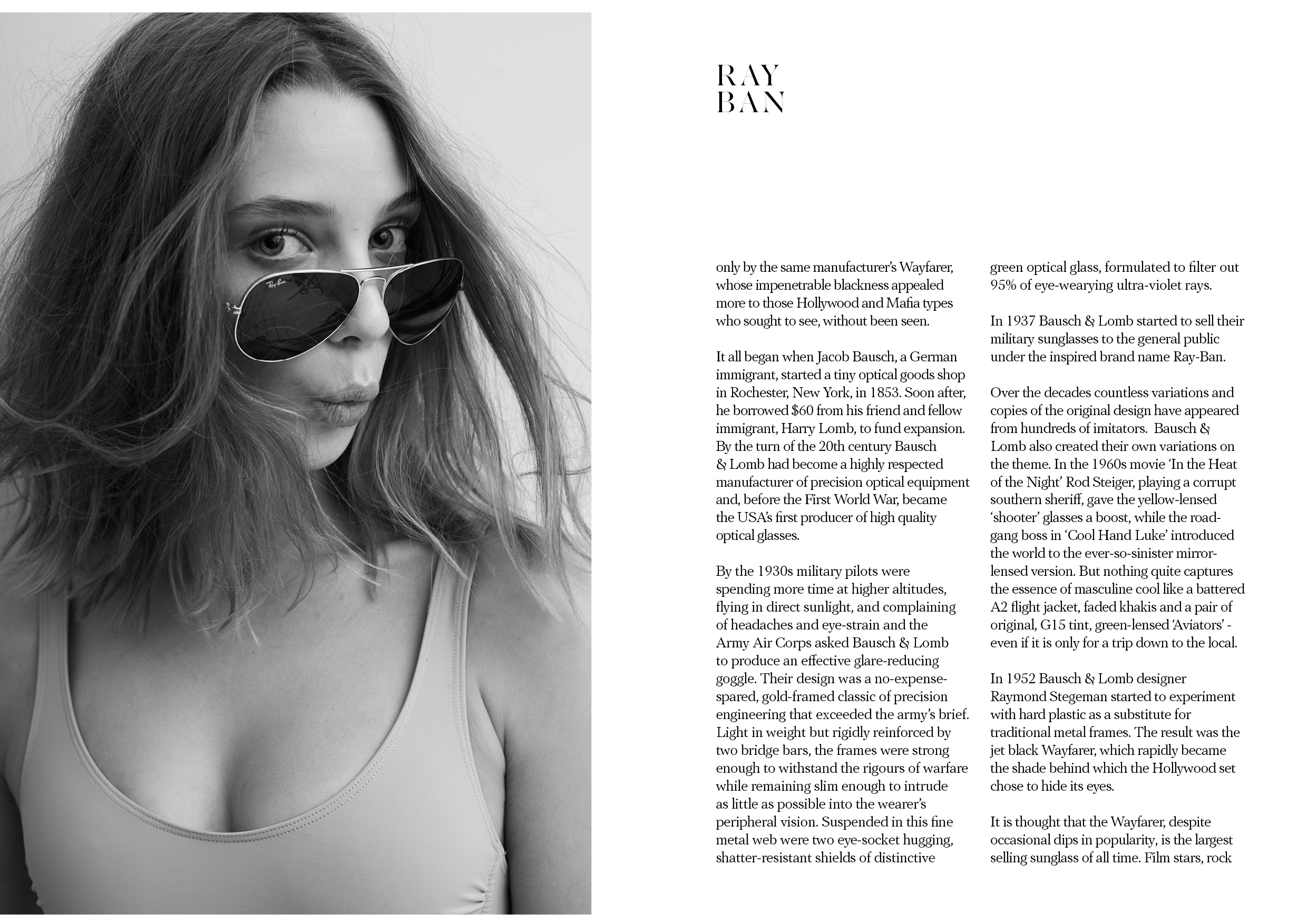 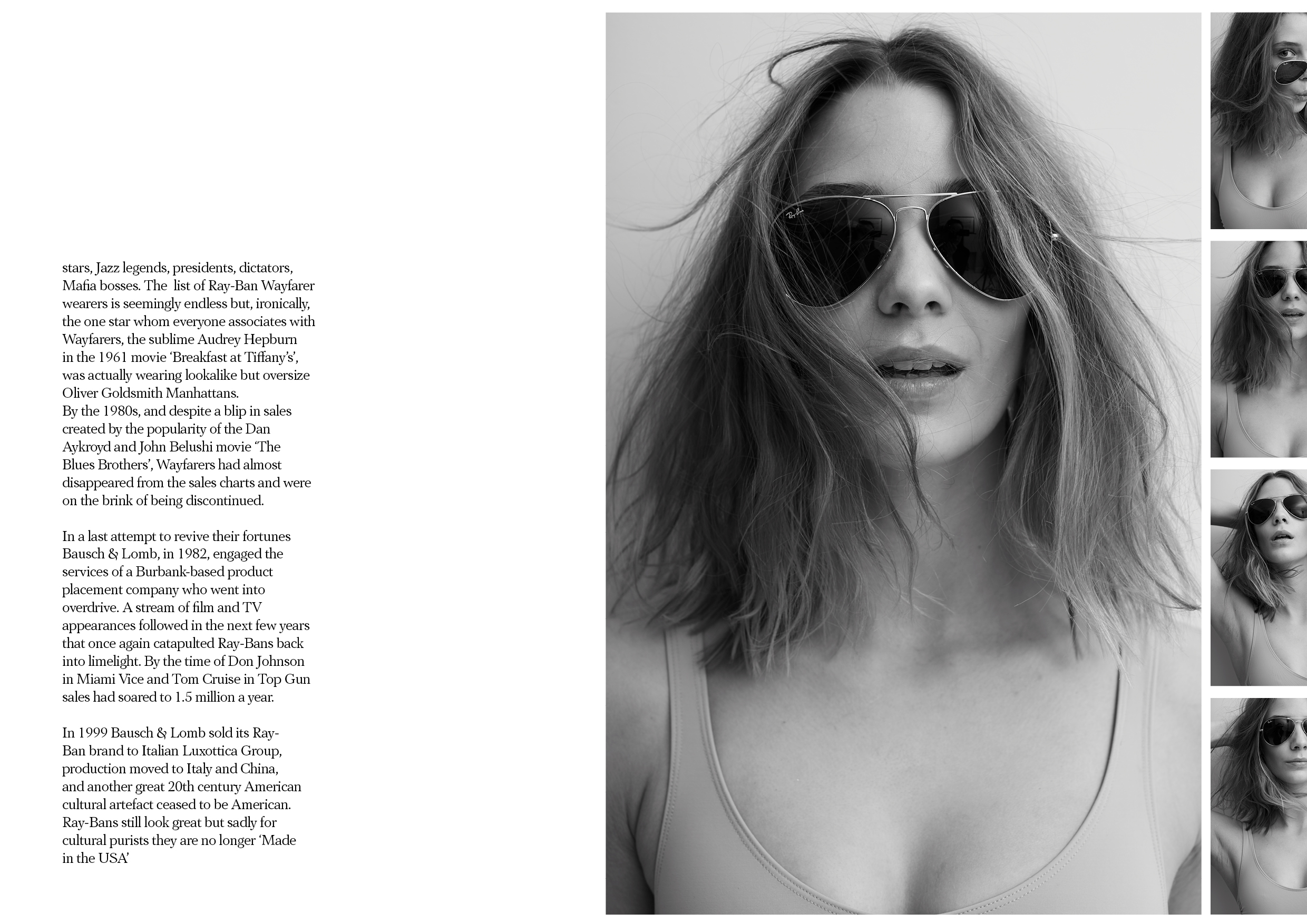