Make magazine has long been obsessed with the breathtakingly beautiful of the work of photographer Nick Meek. We got the chance to chat with him, find out about his obsessions and a little bit more about the man behind the shots.

Q.Tell us a little bit about yourself and how you got started as a photographer.
A. I grew up in Yorkshire and that’s been an incredibly strong influence in my work from the outset.
It’s so beautiful up there in ‘God’s own country ‘. When the sun shines it’s a truly magical place – but the problem is catching it when the sun shines, and that has been the overwhelming force behind my style as a photographer: sunshine, light, brightness and the search for the life that that light gives.
When you grow up in a place where the sunny days are few and far between one tends to dream of a bright sunny life and the sense of freedom that it gives… surfing in your board shorts, bright flowers, open skies, freewheeling a bike downhill… walking barefoot…. Chatting at sunset…. It’s an endless list for a dreamer.

My father got me into photography. He was a keen amateur and later in life became a wonderful portrait photographer. When he bought his second 35mm camera he very kindly gave his first one to me, that’s what set it all off.

Q. How would you describe your what you do and your genre of work? To us it feels like is travel orientated fine art photography, what would be the words you use?
A. I’m just a photographer. When I shoot commissions for commercial clients people call me a commercial photographer, when people hang my work they call me an art photographer, I love having a camera in my hand and I love to travel and observe. To take a broad look over my work from the last fifteen years I’d say that I’m chasing a kind of perfect world, a world that I would aspire to live in. It’s a colourful warm hazy place where one doesn’t have too many problems, one where you’re not hemmed in by big cities, a slower friendly pace.

I think my work is also partly generational, I was born in 69: the Summer of Love, hippies, Woodstock, road trips in VW Beetles, and I remember in my 20’s there was a resurgence of that era for a while. I also think, as a Brit, that my generation has a fascination with the U.S.A. We seem to admire the sunshine, the forever skies, the Grand Canyon, American cars, it was all so exotic to us. I have to say that the current administration over there is certainly tarnishing that dream rapidly! To the point where I find my eye falling on new parts of the world, new places to look for the dream.

Q. What generally informs where in the world you decide to shoot? Is there a lot of research and planning or is more organic than that?
A. It’s a mixture, I have a hit list of places to visit that is rather long! Usually, I have the beginning of an idea and the leads me to a certain geographical location, sometimes the idea is realised and sometimes I get there and find something totally unexpected. The important thing is to be open and allow yourself to be fully immersed in the environment.

Q. Who are your favourite photographers?
A. I’ve just turned round to look at my bookshelf, I’ll go through the first row a little bit but there are hundreds of them…
Chris Verne, Huger Foote, William Eggleston, Joel Sternfeld, Stephen Shore, Albert Watson, Gurkst, Hanna Sterakey, Robert Frank, Jeff Wal, Salgado, Avedon,Philip Lorca Di Corcia, Joseph Sudek, Lee Friedlander, Ed Ruscha. There’s probably more Eggleston in there than anyone else….

Q. Is there a photograph you would have loved to have taken or would love to own?
A. Yes, Wall Street by Paul Strand. It’s such a beautiful piece of work. It has a monolithic strength of composition, the light is diamond hard, it’s sparsely populated by tiny people each with there own sense of urgency. The subject matter isn’t exactly my favourite thing, it is more the structure of the image: Its genius.

Q. Some of your photographs look like they have been taken in fairly intrepid spots, have you had any scary or hair-raising experiences doing what you do?
A. Some of the work from the Himalaya was done during a climbing trip to a mountain called Kyajo Ri. It’s pretty remote out there and at the time of our expedition had only been climbed a handful of times. I’m not a real alpinist and was part of a guided expedition so frankly there were numerous scary situations. A more pleasantly hair-raising time was during an assignment that took us to Greenland. We travelled with two Inuit hunters by boat to the snout of a colossal glacier, passing narwhale hunters and occasionally jumping out of the water as the bow of our zodiac glassed off underlying icebergs. We were then collected by helicopter and dropped in an area seldom (if ever) visited by humans. The helicopter made three trips dropping two people at a time with enough shelter and food so we could survive if the helicopter ‘went technical’
On another commercial assignment I found myself scuba diving in the predator tank in the Cape Town aquarium, surrounded by sharks, no cage, just accompanied by a marine biologist and a wooden stick but that’s a longer story…

Q. How do you feel the accessibility of the medium of photography has changed your work (if at all) Are apps like Instagram something you like to engage with or just a necessary part of the way the industry has evolved?
A. It’s all just amazing! For me in the 90’s and 2000’s the freedom of shooting with medium format was a real luxury. Usually, I would shoot with 5×4 and 10×8 field cameras. I’d often come back from a three-week roads trip around the Southwest States with just four or five good pictures because the process was so slow. I’d immerse myself in the darkroom for days making prints of those five images, It was painfully slow.

Now my medium format camera is 100 megapixels and is far more detailed that even the slowest 10×8 film ever was. Even 35mm cameras of 40 MP capture more detail than 5×4 in every way, and it’s incredibly liberating.
I think the technical ease of the modern camera has pushed photography massively, it’s great, it should be embraced with open arms. I’ve always strived to produce absolute detail in my printmaking and today our tools are better than they have ever been.

Social media is the new portfolio for photographers, it’s a nice way for people to understand the flavour of your work. Of course, it’s not like seeing the real thing, the print, but accessibility to all this wonderful work only helps to propel all forms of image making.

Q. Where is next on your travel agenda?
A. Cliff divers and rockpool bathers around Puglia

Q. What do you think you would you be doing if you weren’t a photographer?
A. That’s really interesting. From the age of seventeen, I was going to become a photographer, it’s not like I’m from a wealthy background and could afford to try and fail. It had to happen. So the only real choice for me was what kind of photographer!

Q. Best hotel you have stayed in is?
I like the Korakia in Palm Springs…. It’s a secret hideaway for Los Angelenos looking to be anonymous.
Q. And what’s always in your suitcase?
A. The thing that I always travel with is (rather strangely) a tweed sleep mask and some noise cancelling headphones….

Q. What keeps you reaching for your camera?
A. The need to take pictures of the place I want to be.

Q.What would be your advice for the up and coming generation of photographers?
A. I guess it depends massively on the field you want to work in. But generally speaking, there are more photographers now that ever before, partly because it’s technically easier and partly because we have more things that carry images, and those things spend a lot of time ion the palm of your hand. We consume images faster than ever before.

As a young photographer, you have to be a master marketer of your work. Your work has to be different enough to rise above the noise; your work has to have a voice that resonates with people if you want them to love you.

Q. The theme of this issue is obsession, what would you say you are obsessed with?
A. Dreaming.

You can see more (and buy) Nicks work at his website www.nickmeek.com 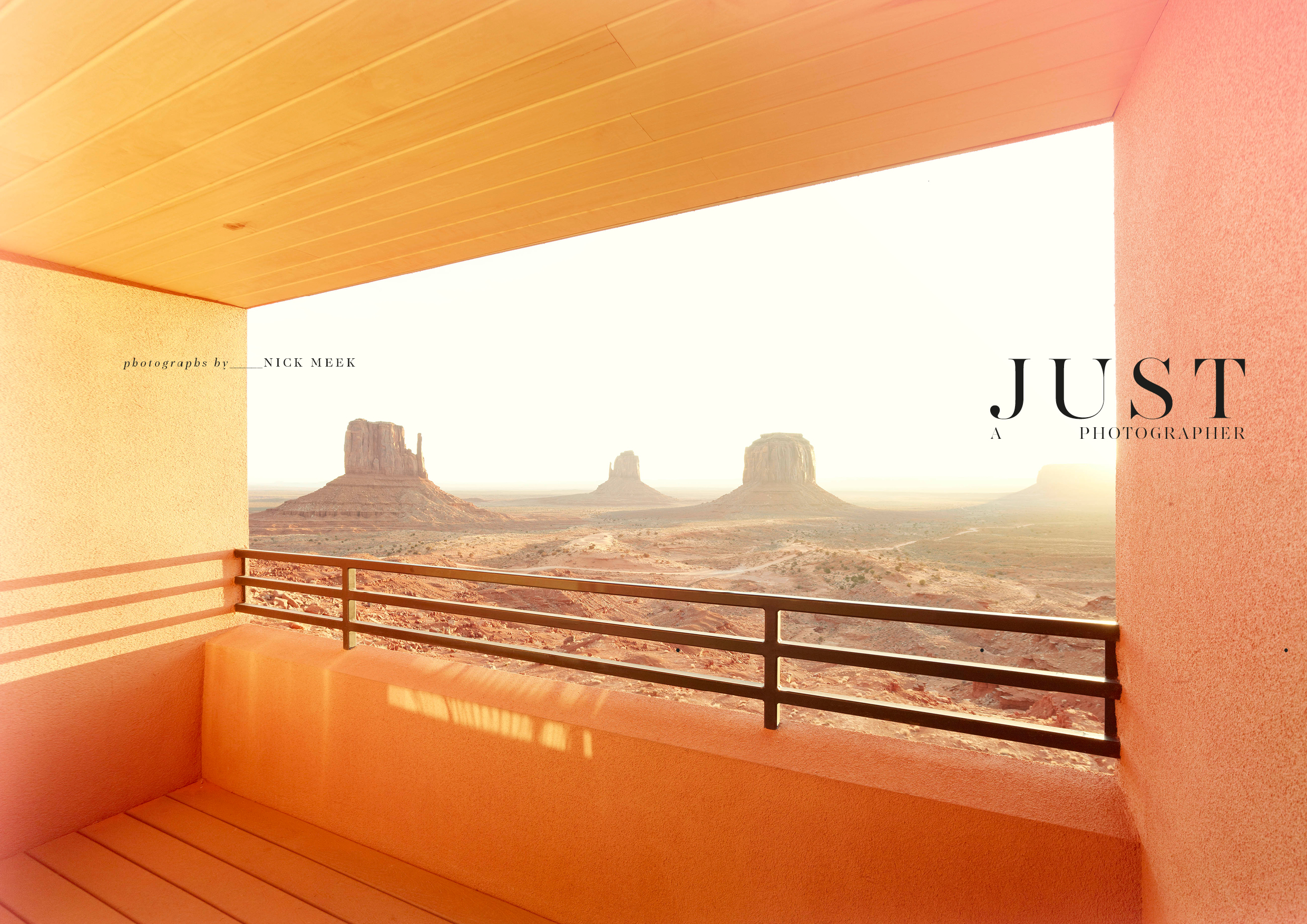 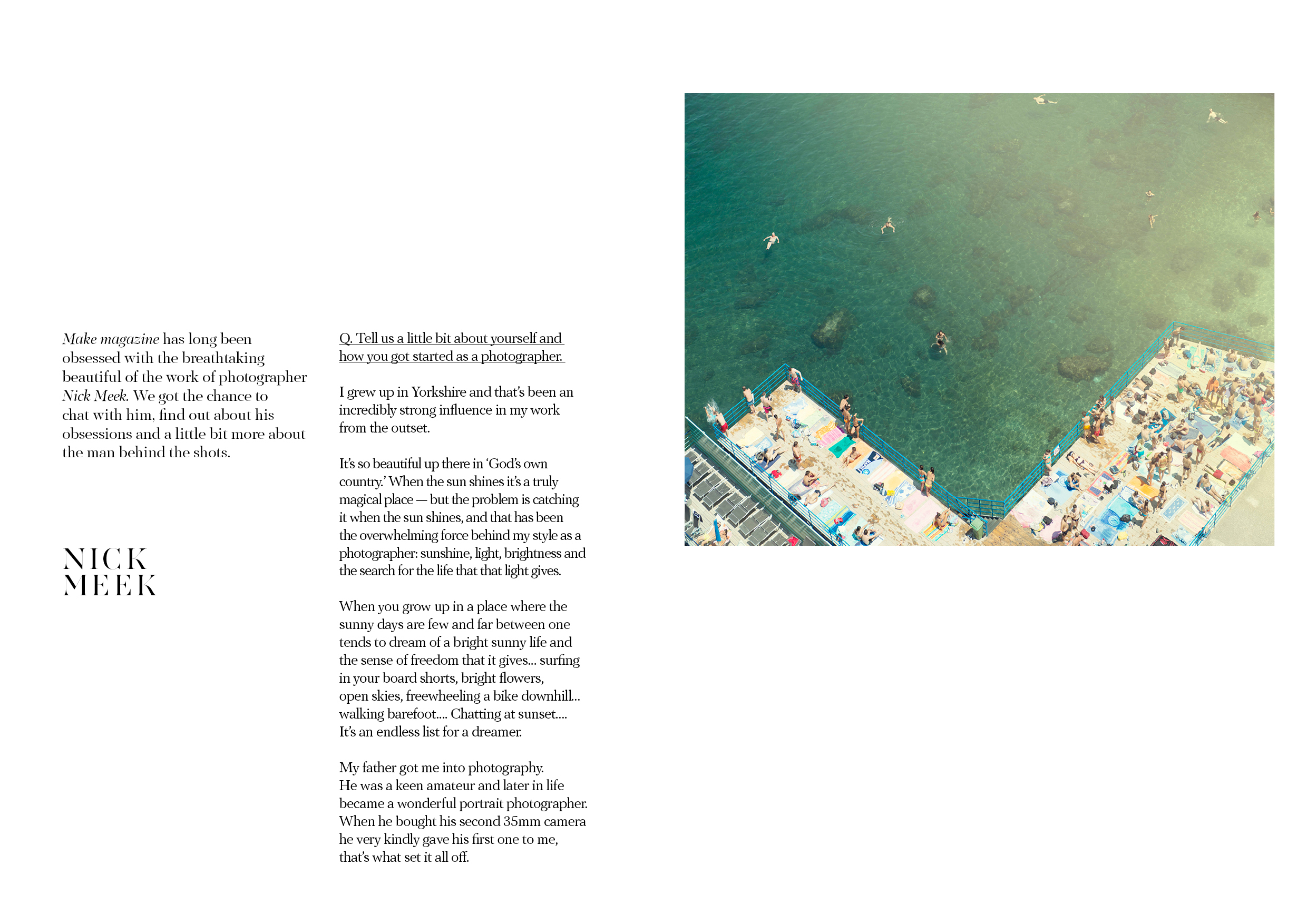 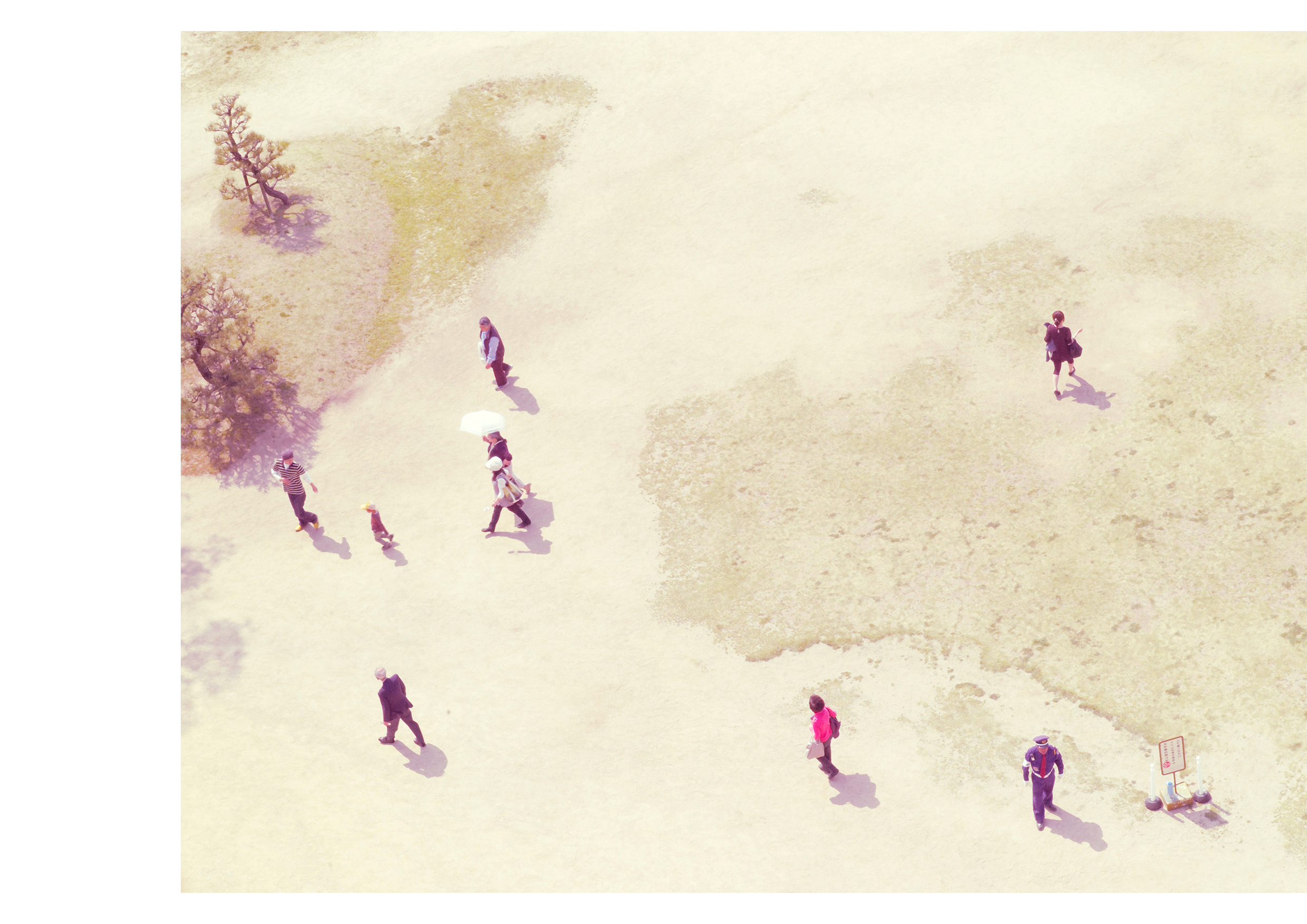 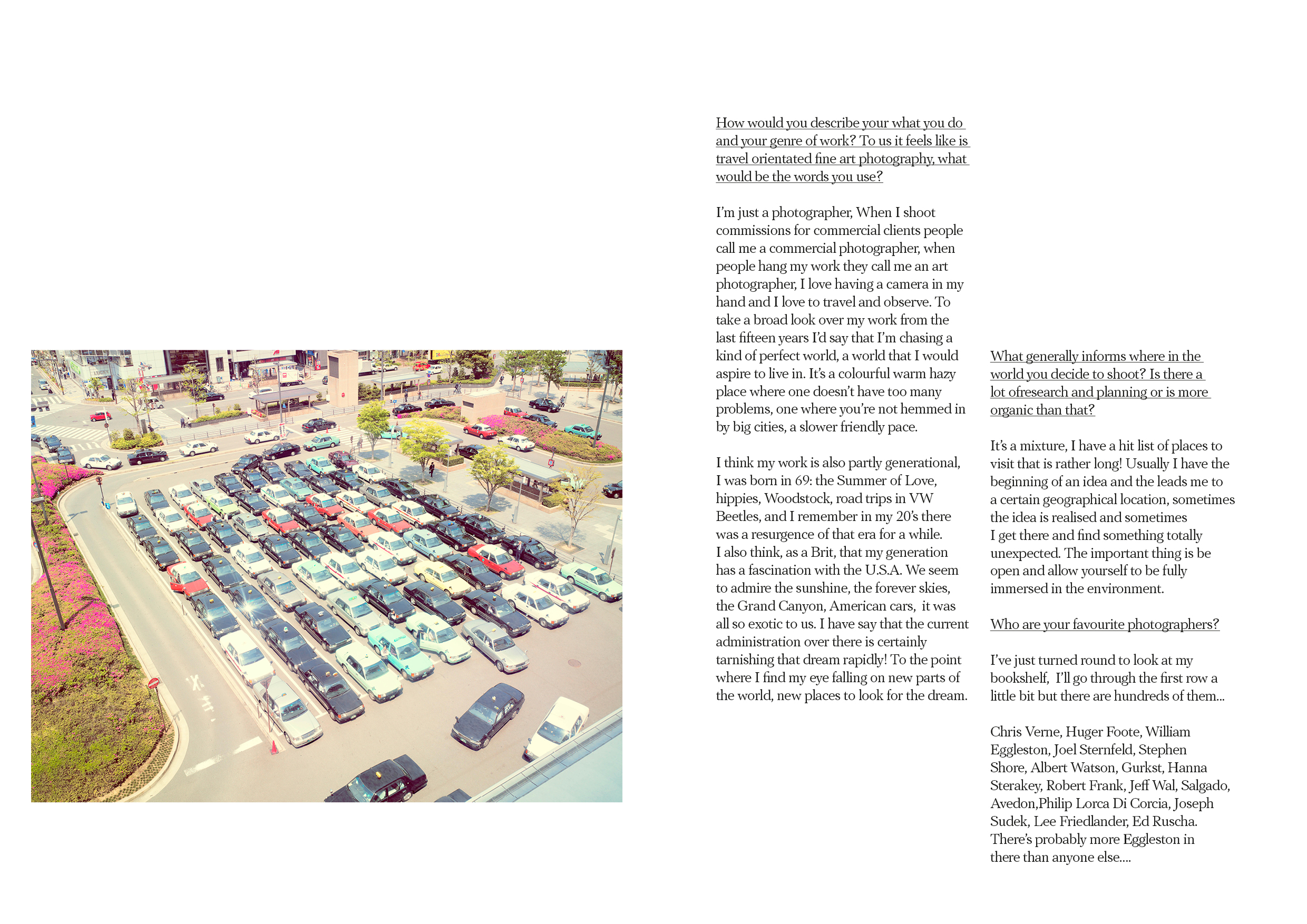 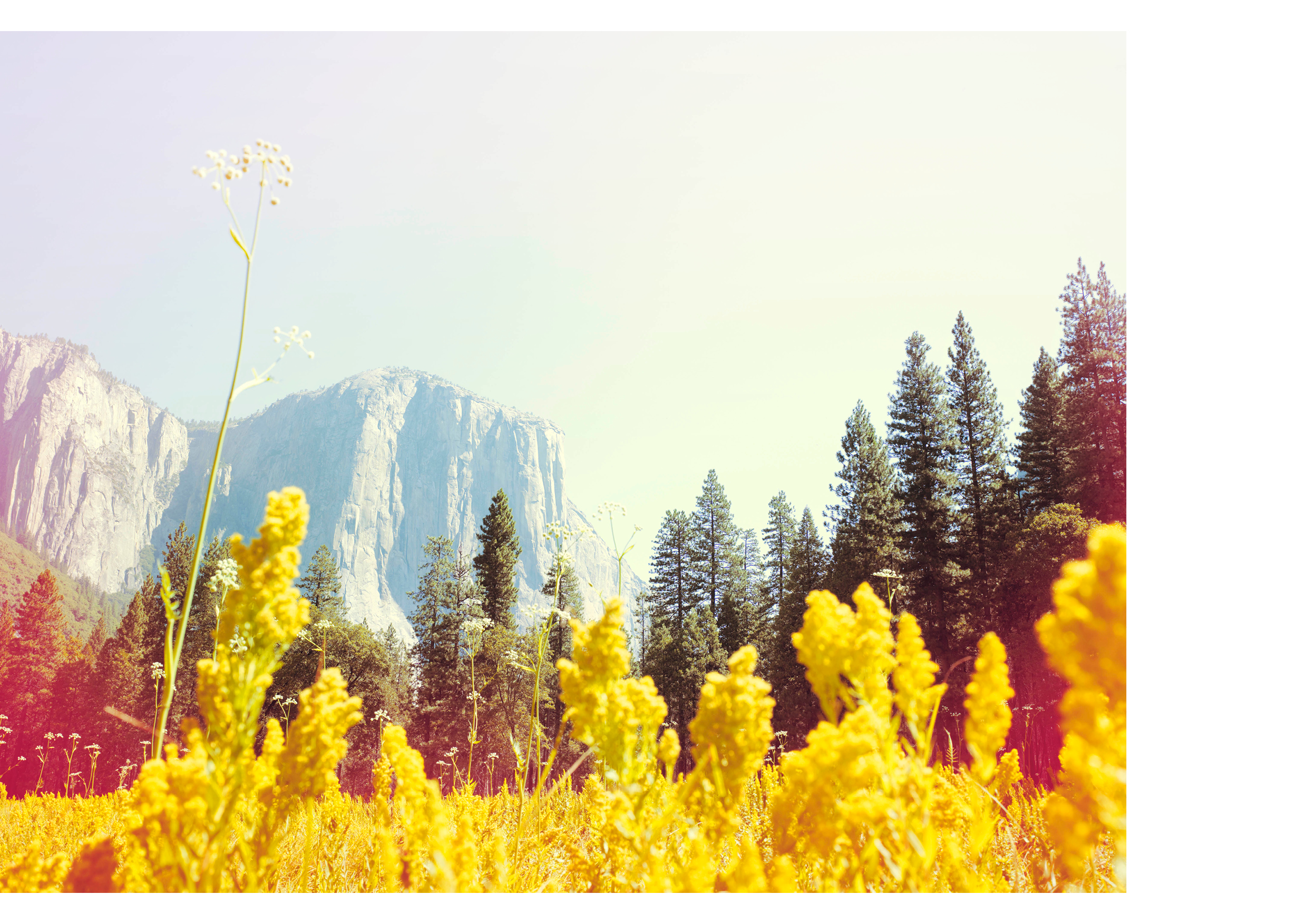 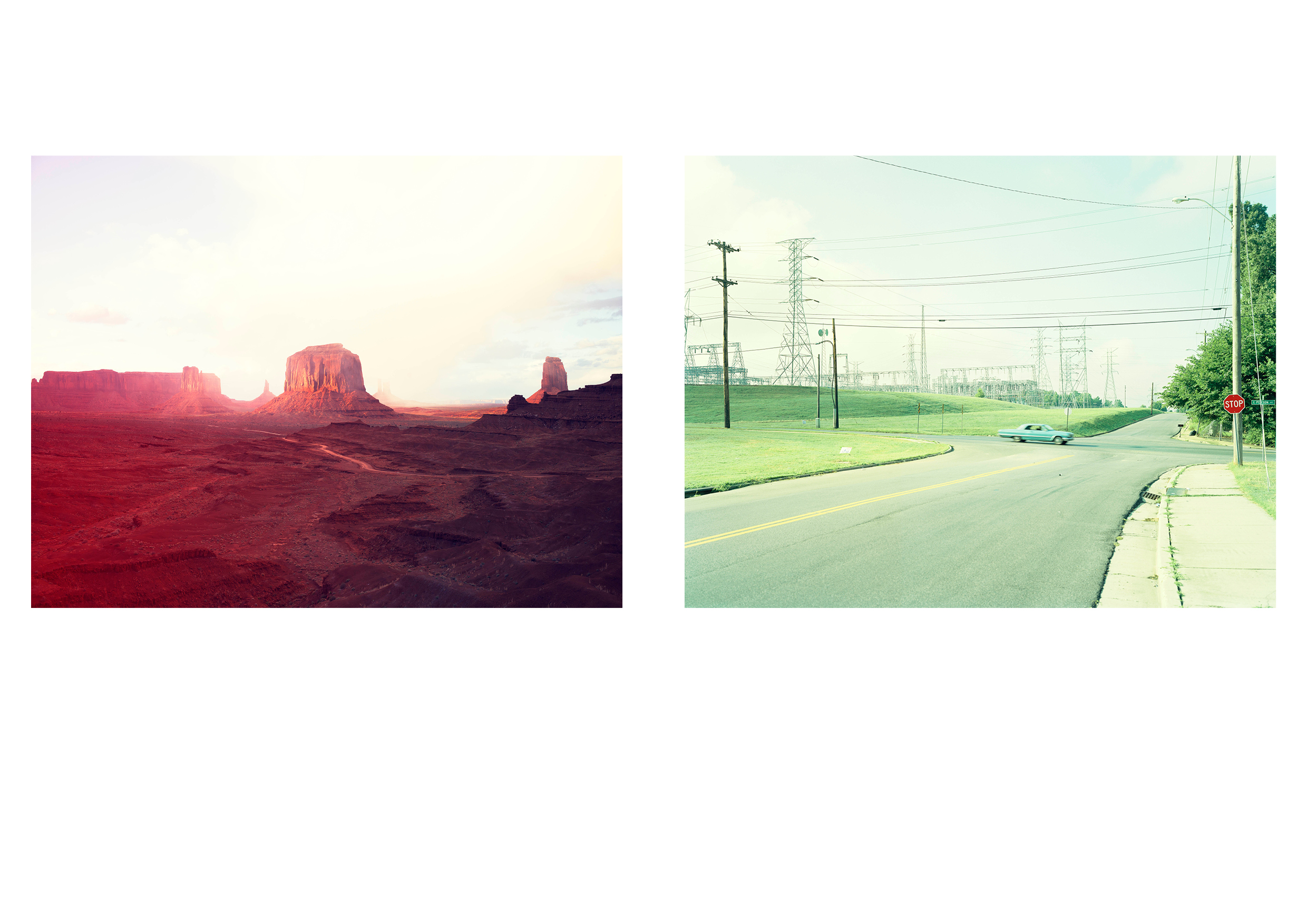 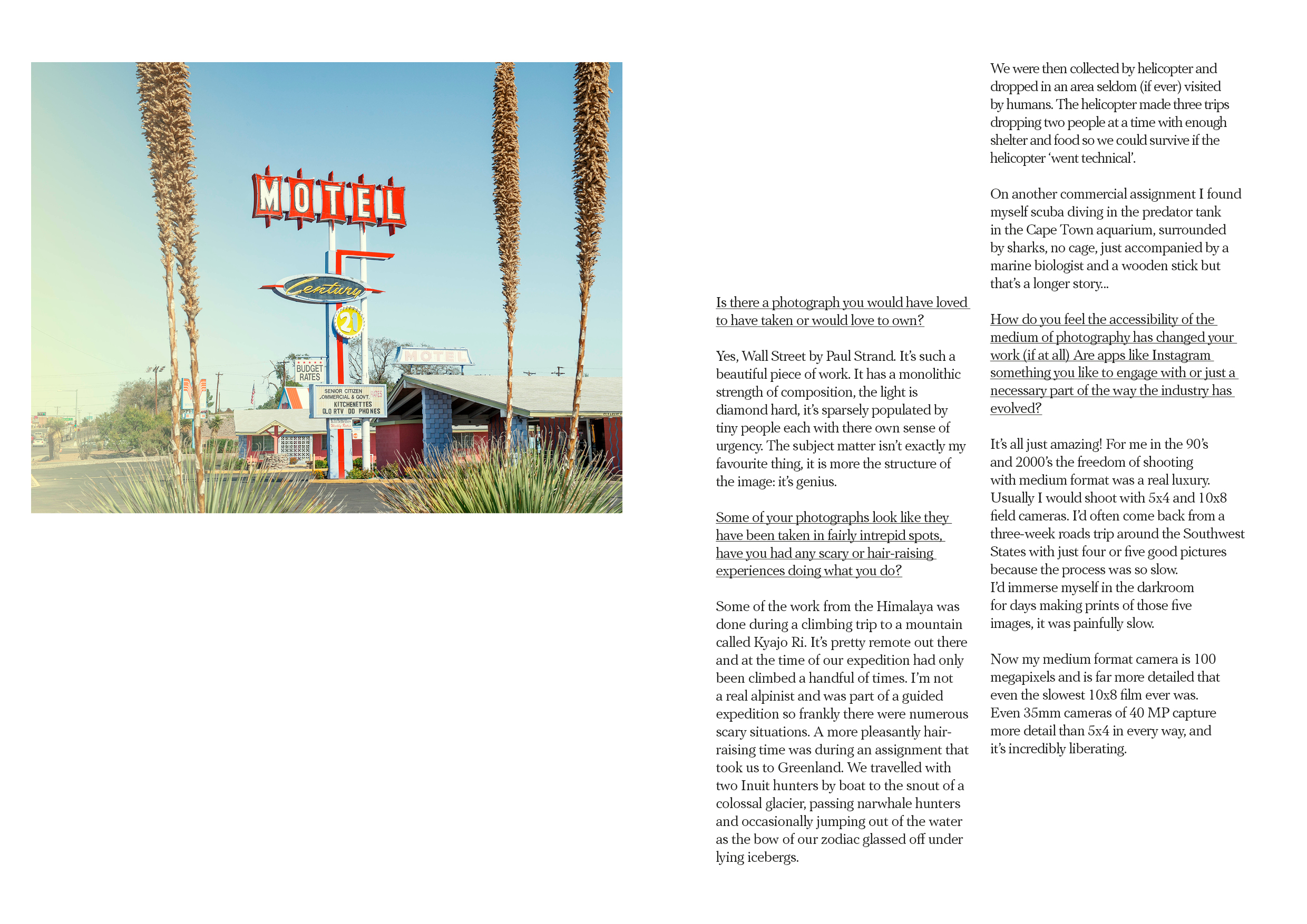 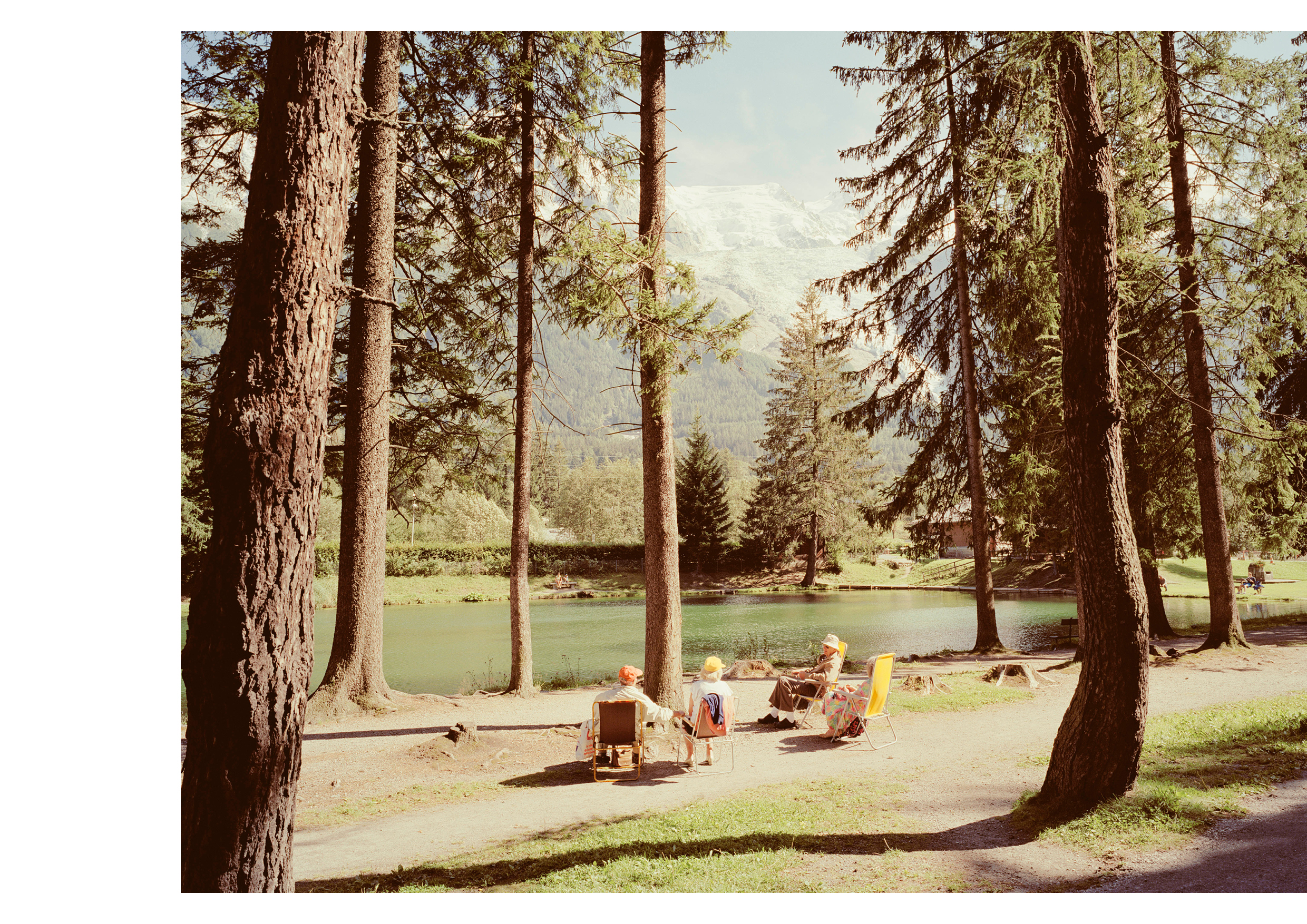 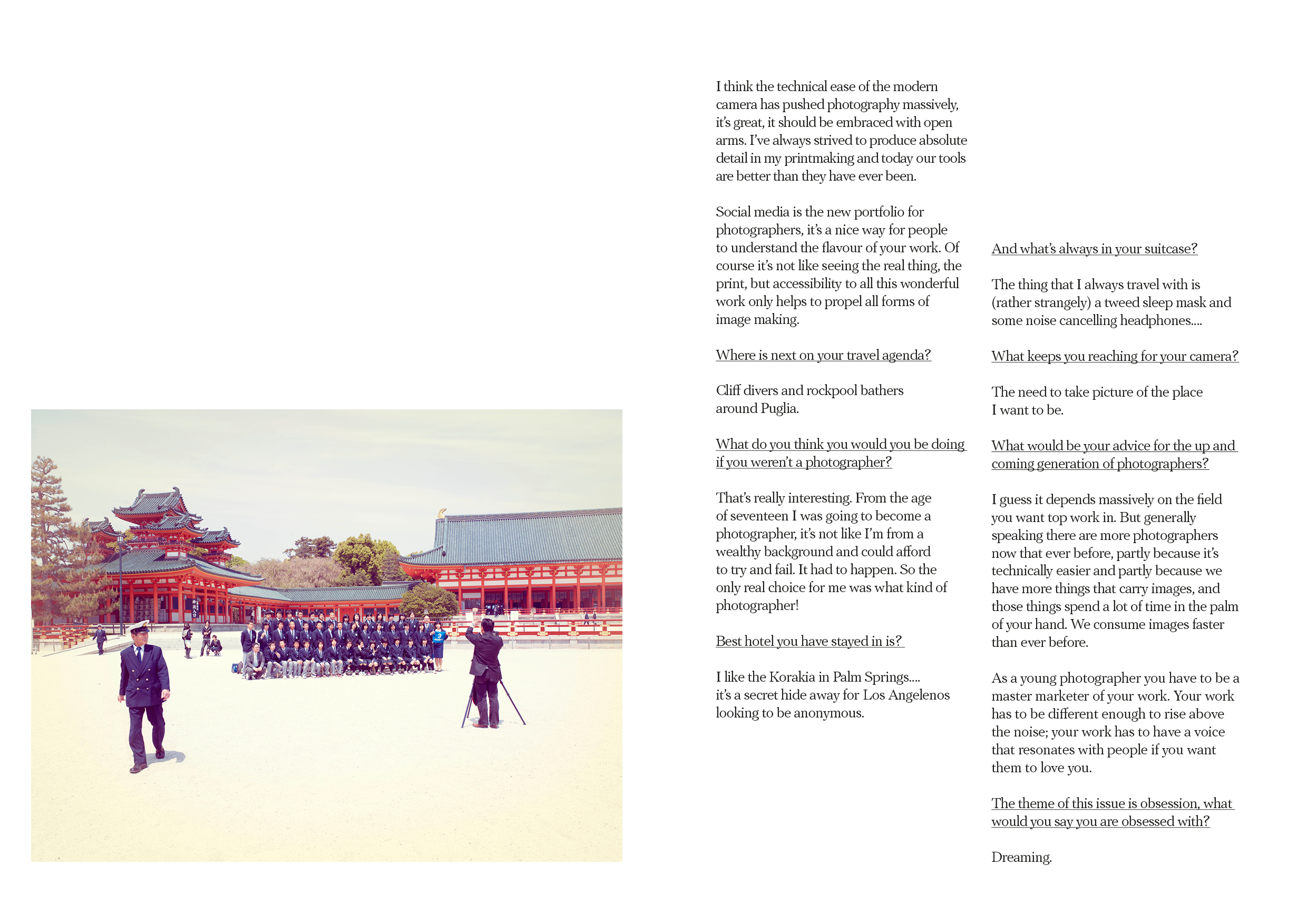 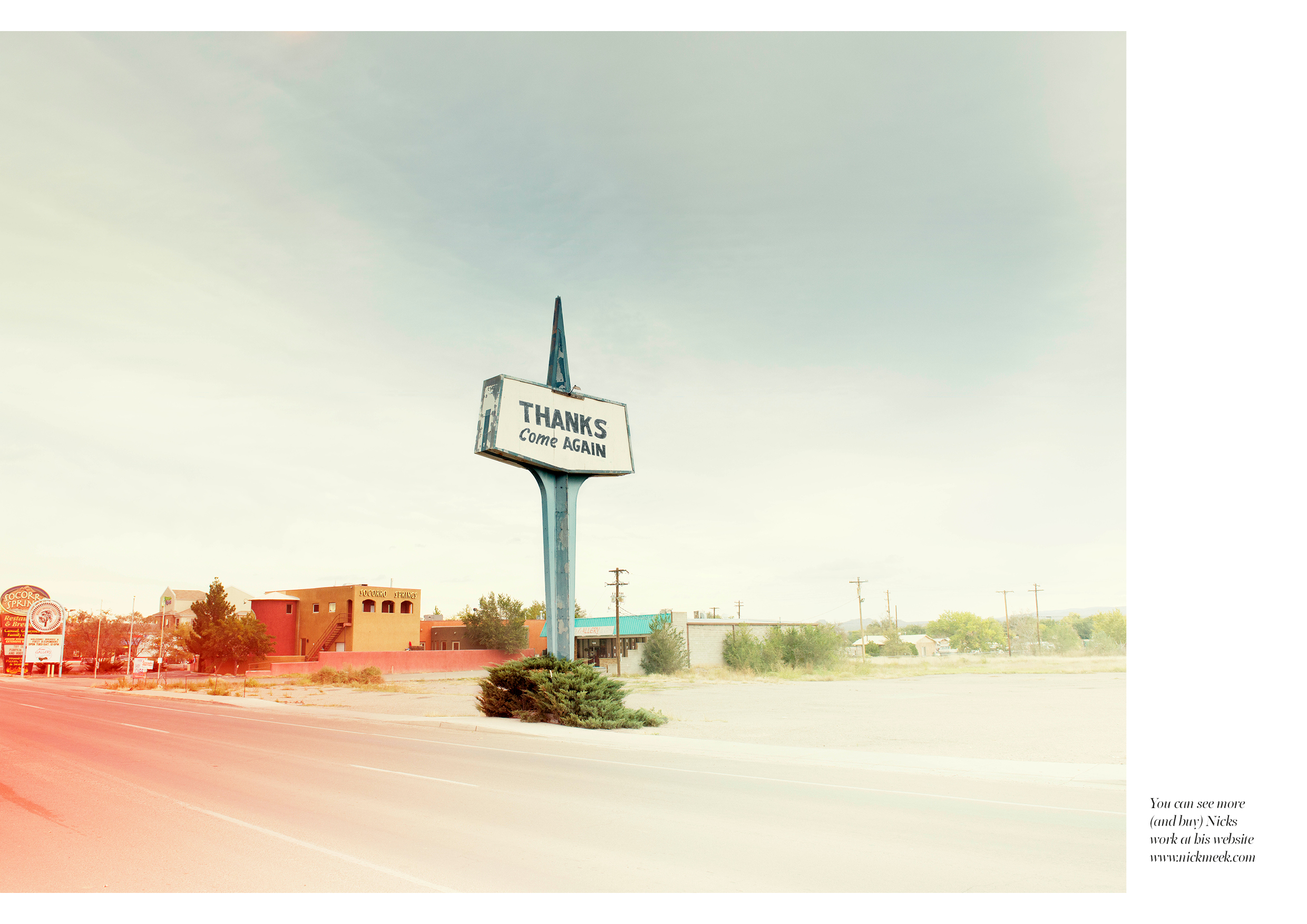