Greta Bellamacina is leading the new wave of contemporary poets but don’t expect her to have her feet on the ground. She’s too busy shaking the rags out of the clouds.

It’s fair to say that poetry is having something of a renaissance. From Kendrick Lamar’s album DAMN winning this year’s Pulitzer Music Prize and Hollie McNish’s rallying feminist cries on YouTube to Kate Tempest damning orations headlining the Park Stage at Glastonbury, poetry has become the new rebellion.

‘Instapoets’ are publishing sensations – with a lightning-fast platform to reach millions and with short words that sum up a depth of emotion. Poets like Indian-Canadian Rupi Kaur and Cambodian-born, New Zealand-based Lang Leav feature high on the New York Times best-seller lists and Beyonce sampled Somalian-British author Warsan Shire’s work on Lemonade .

“It’s an exciting time to be a poet,” says Greta Bellamacina , speaking to me after taking a break from Make Magazine’s shoot. “It’s democratic – you can have the world at your fingertips. Poetry can make change. In a world of frantic news and information, it feels human to just be able to speak frankly, with emotion. Poets shake the rags out of the clouds.”

Beautiful, young, forthright Bellamacina often, endearingly, trails off her sentences with an opaquely poetic line. It gives her a vintage feel: Bellamacina looks and acts like she could have stepped out of a biography of the Bloomsbury Group. Her movements are languid, her eyes hooded and her body gamine; she has a timeless grace that is part Vanessa Bell, part Nico.

So while Tempest and Nish, Lamar and Leav, are breaking our definitions of what it is to be a poet, Bellamacina is doing something to hold it together. The romance, the etherealism, the otherworldly beauty. It was her gamine looks that got her noticed first – she was scouted on a Camden bus at the age of 14, and started modelling a few years later for Stella McCartney, Shrimps, Ghost and Burberry.

Shortly before, at 13, she starred in Harry Potter and the Goblet of Fire . “Even then I had scribbled poems in my bag”, she says. “Growing up in London, acting and modelling were such a fun thing to do. I was a very reflective child. I loved writing plays and making my sisters perform them. When my mother draw the curtain and turned off the lights, I would tell my sister Camilla ghost stories in the dark.”

Bellamacina grew up in Camden, on the gritty side of Hampstead Heath, with her musician father, mother and sisters. “We were a kind of performing clan; it was an endless mix of ballet classes and tap routines. I used to think we were just like the Famous Five, always on an adventure.”

Now she lives more centrally in London with her two year old son Lorca and her husband, the Scottish poet Robert Montgomery, who was called the ‘text-art Banksy’ by the Guardian for his billboard poems that have been seen everywhere from Berlin to Shoreditch. “Fitzrovia is like a lost village on the edge of Oxford Street. I love living in the centre of all the chaos, I think the energy is a driving force for me.”

Virginia Woolf and Vanessa Bell once lived a few streets away and, just like Woolf and her husband Leonard, Bellamacina and Montgomery have founded an independent printing press. The New River Press supports Gen-Y poetry talent. Montgomery described it as a ‘very old fashioned thing… a poetry pressed owned by a mum and dad. A little family business’ to dontgetcultry.com . However, Bellamacina has a more focused agenda: “There are lots of really good young poets publishing their own work on the internet and we wanted to set something up where we could publish the best new young poets. A poetry press for millennials,” she says.

“For me, it’s the purest art form; part of our daydream mind,” says Bellamacina . “Poetry aids the invention of language. It doesn’t conform – you can be cruel and kind in the same line. It’s an antidote to the horrors of everyday life. I can remember finding an old copy of ‘The Wasteland’ (by TS Elliot) at home and reading it like a secret. I find novels too simple, the language bores me – it’s like listening to the Archers or the sound of a washing machine. There’s something missing.”

But where do you start if, a slacker like me, you weren’t reading The Wasteland, as a child, on the kitchen doorstep? “I would start with Sylvia Plath’s Ariel – you might as well start at the top. Then, the Poetry Cafe in Covent Garden has performances every night of the week. I did a lot of readings there in my youth to build up my confidence.” You can also catch Bellamacina at the Hay-on-Wye Festival at the start of July. Or head to Urban Outfitters on Oxford Street, London, on June 28th, where Bellamacina will be launching her volume of ‘Selected Poems 2015-2017.

Urban Outfitters? What’s next The Wasteland in Westfield? Bellamacina could see it happening. “It can be very powerful to put poetry in unexpected places, like fashion and film,” she says. “I want to reach the teenager in the suburbs who wouldn’t necessarily find a poetry collection when out shopping.”

For now, shopping centers aside, Bellamacina is focussing on her upcoming second feature film, Hurt by Paradise, which starts filming at the end of this month. And she has two other films in the post-production suite, out at the end of the year. But the verse is never far away and she has a collection called Pershing Tame due to come out in Spain. For the last six months, Bellamacina has been working away with a translator. “ It’s been a really interesting experience. I’ve learnt so many things about myself from the whole process. I feel like I’ve almost had a parallel universe stare back at me.” An epic universe at that, I imagine. 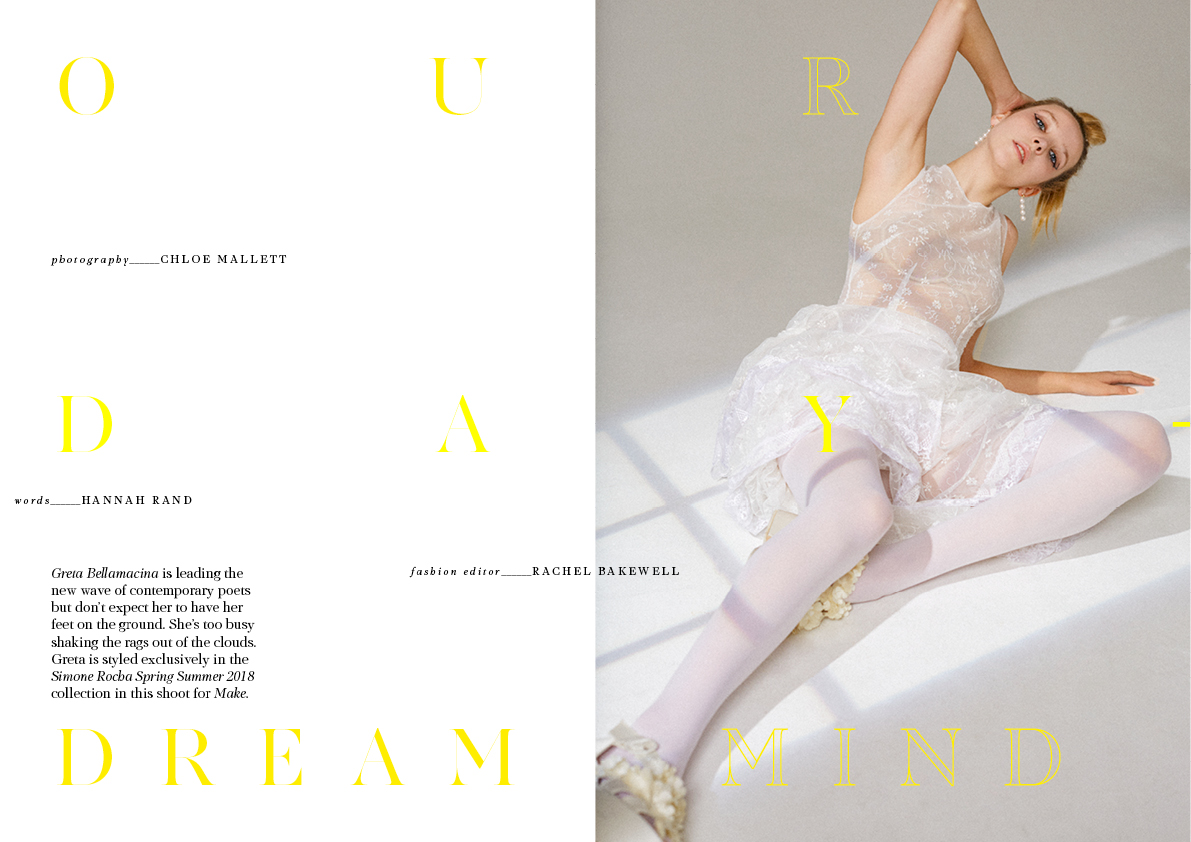 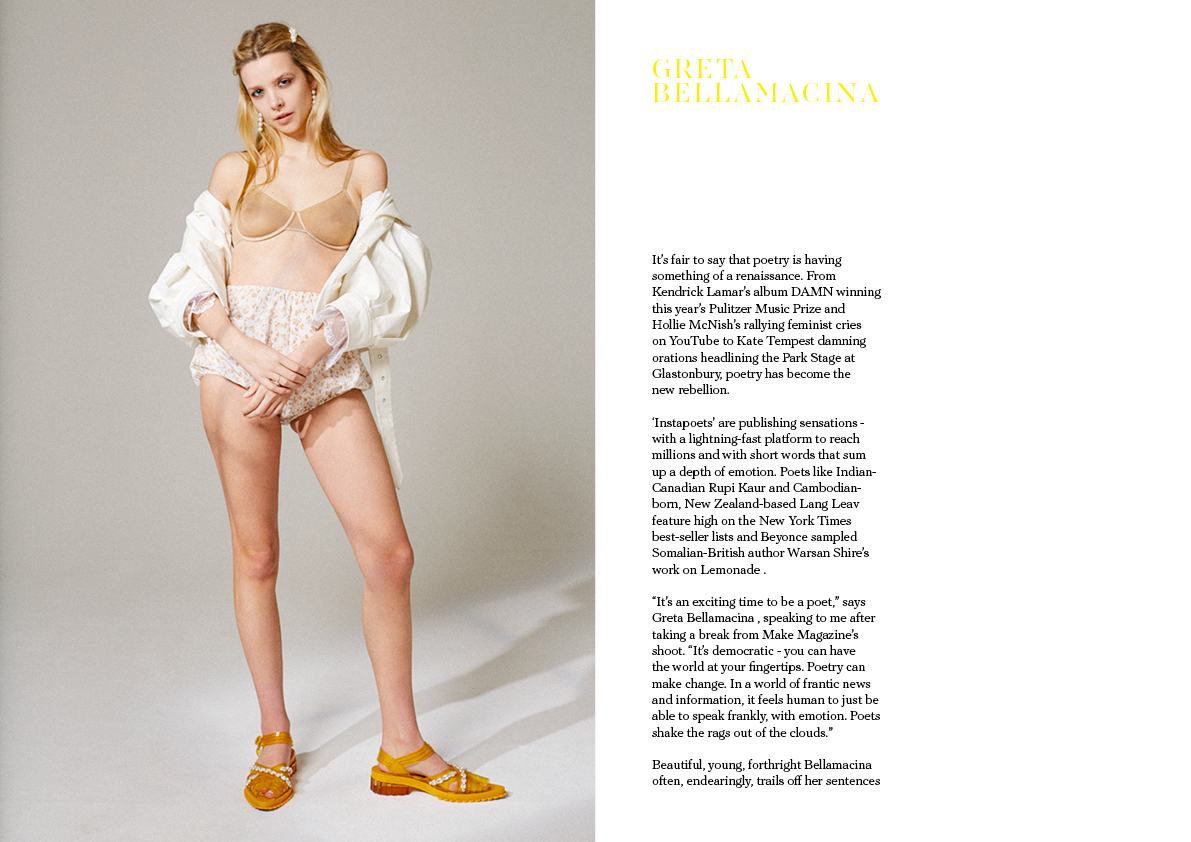 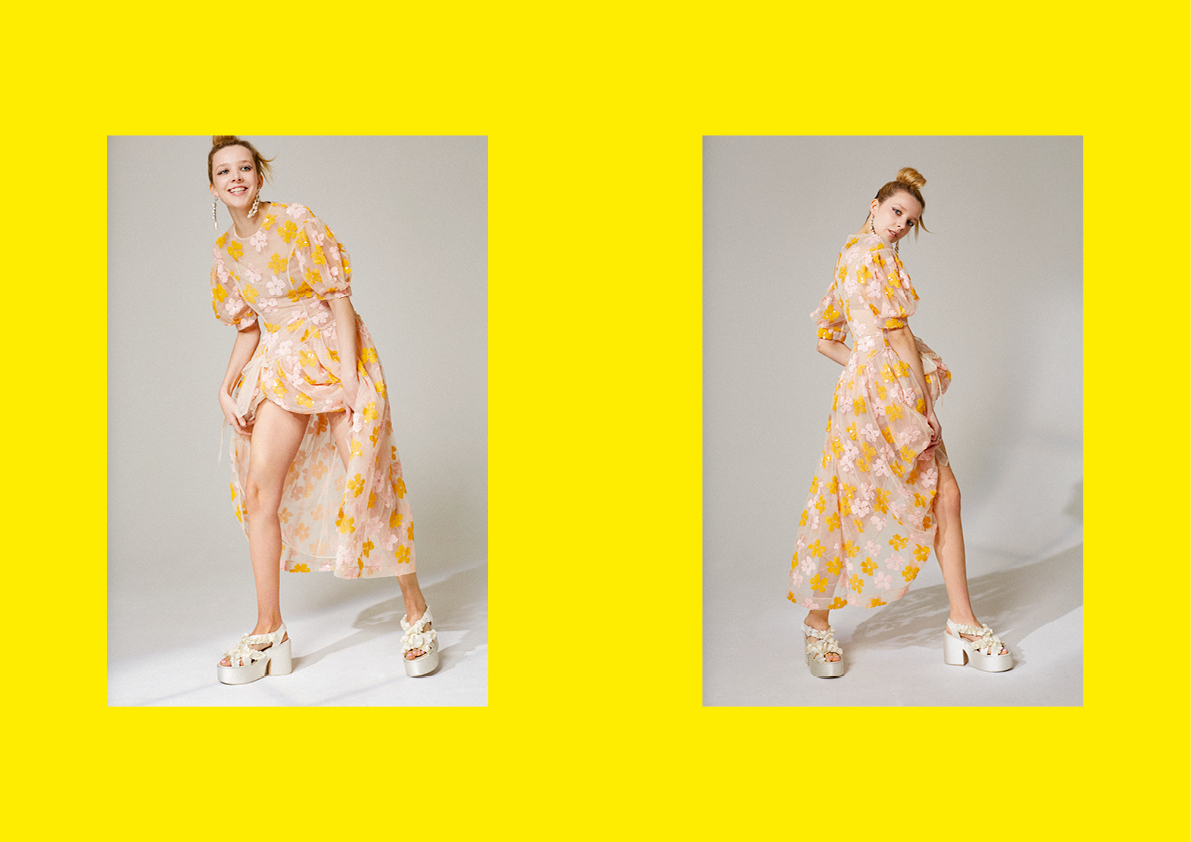 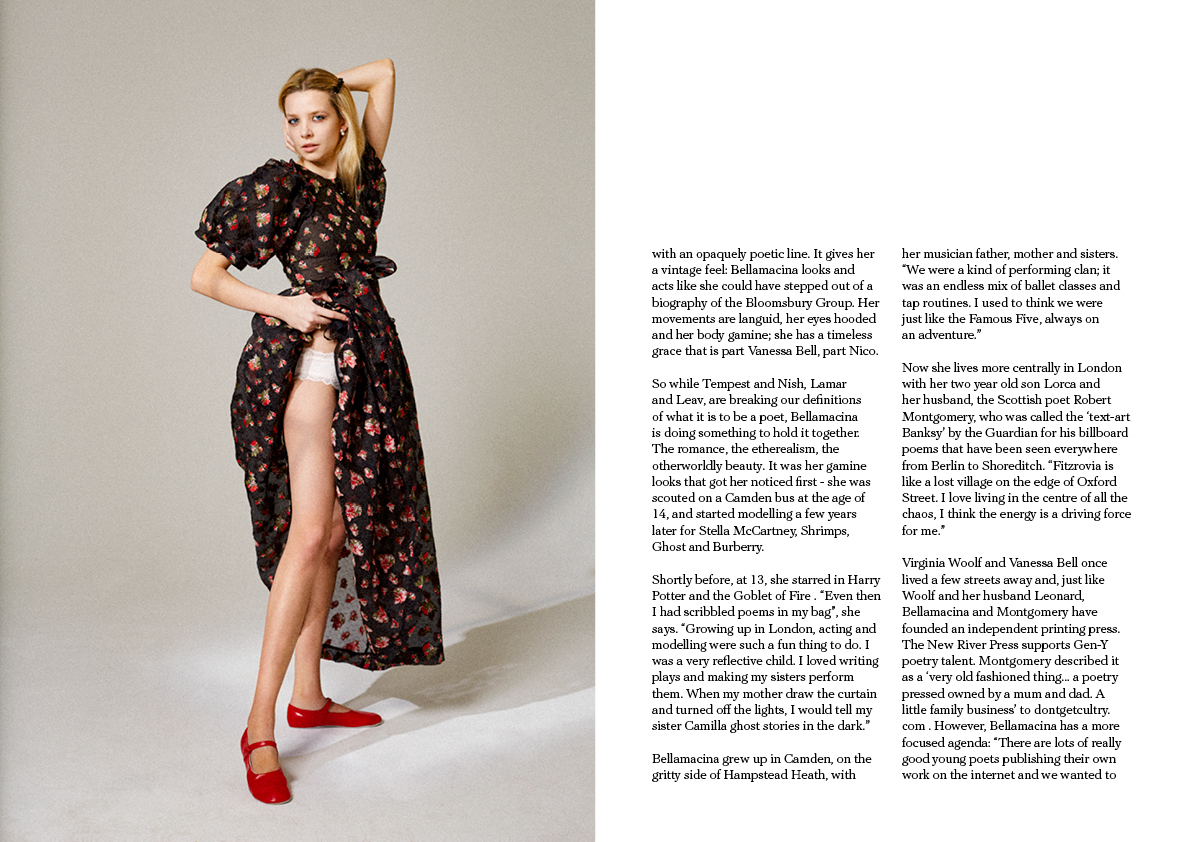 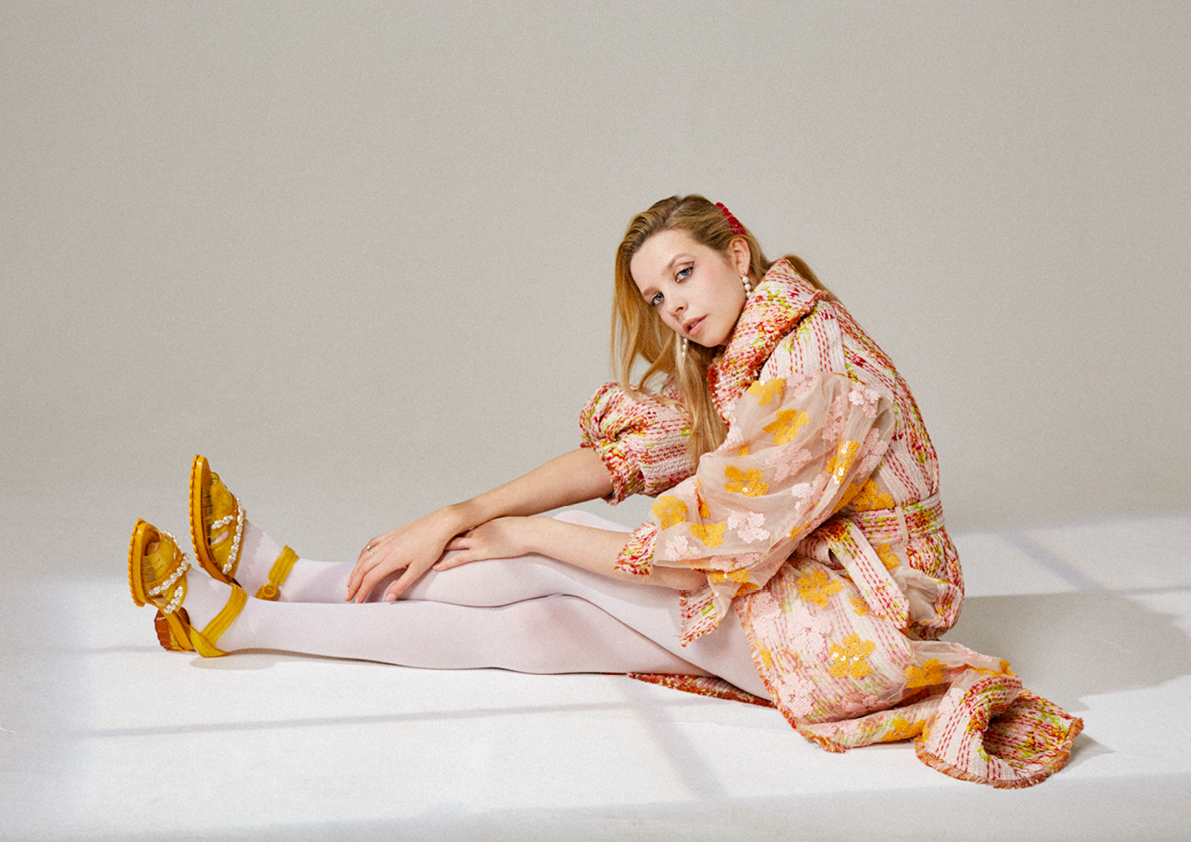 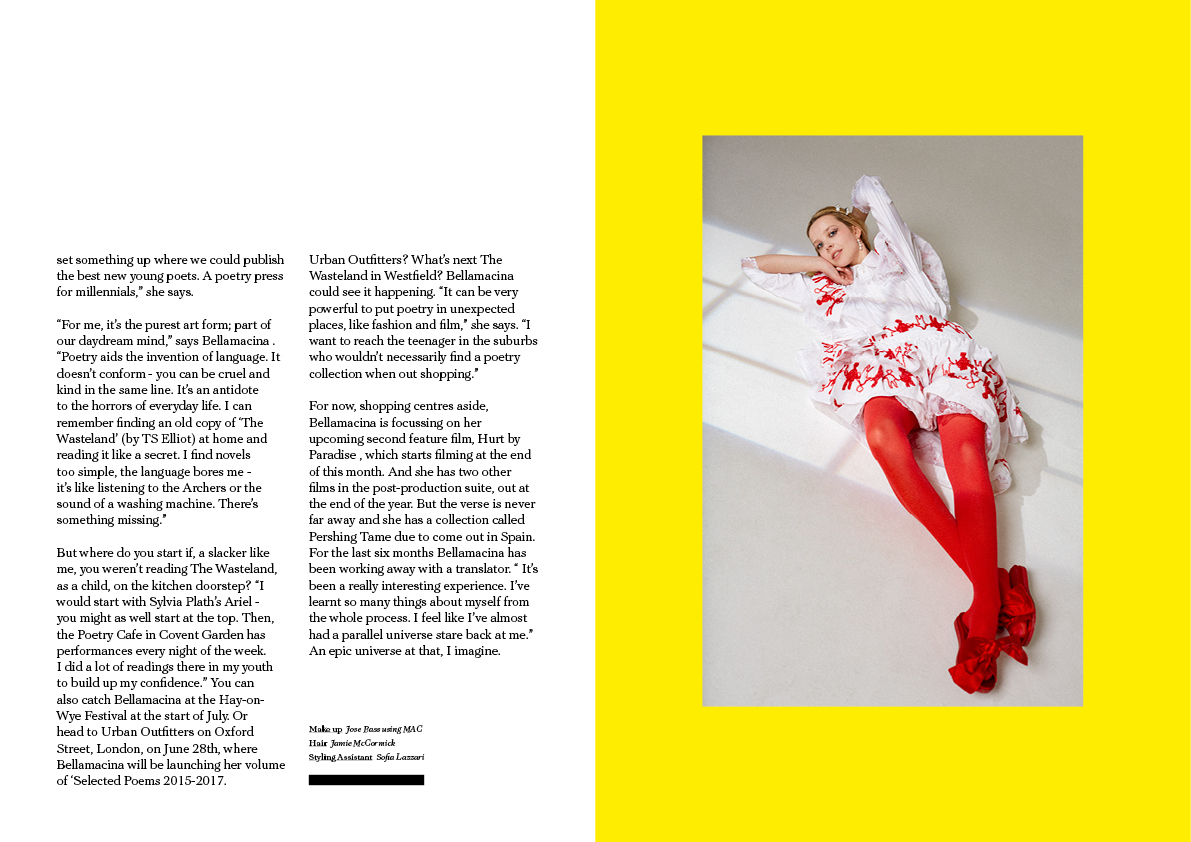