In our eighth feature on iconic fixtures in the perennial wardrobe, we focus on the Duffle coat to find out why it deserves its place in fashion history.

Duffel or Duffle? Popular usage is weighted towards ‘duffle’ but if one wanted to be etymologically accurate ‘Duffel’ might be more appropriate for it was in this small Belgian town close to Antwerp that the coarse woollen material that gave the garment its name originated sometime in the Middle Ages.

For many, the duffle will conjure up images of extravagantly-scarved 1950s Trad-Jazz-enthused students or CND supporters purposefully striding to Aldermaston. Others may recall the sleeve of the Oasis single ‘Roll With It’ and the incongruously duffle-clad band watching TVs on Weston-super-Mare beach or perhaps David Bowie as the lonely alien in the movie The Man Who Fell to Earth.

Although duffle cloth originated in Belgium, by the early 1600s it was being produced in England as blanketing. The garment, yet to acquire its name, is said to have evolved from a 19th century hooded and toggled Polish military topcoat but its British form sprung into being in 1887 when garment manufacturer John Partridge introduced the hardy coat into his range of outdoor clothing.

Around the same time the British Navy was seeking a warm and water-resistant deck coat and with its densely woven high lanolin content wool, Partridge’s coat was just the ticket. By WWI the more-or-less one size fits all ‘convoy coat’ had evolved pretty much into the form that we know today – a voluminous hood with a buttoned neck-closure tab, shoulder yolk for extra strength and waterproofing, large patch pockets and of course the flapped front with chilled-finger-friendly wooden toggles and hemp rope loops.

By WWII the duffle was standard Navy issue and the first official issue garment to be adopted by both ratings and officers and was soon being poached by other branches of the military. General Bernard Montgomery, distinguished soldier, notorious publicity seeker, and something of a military fashionista, if perhaps on the shabby-chic side of the spectrum, was much photographed in his duffle coat, which was soon sported by many other British army officers including David Stirling, founder of the SAS, who wore his on long-range desert patrols.

Post-war a mass of military surplus hit the streets and for cash-strapped men, a duffle provided a cheap overcoat and in 1951 the Ministry of Defence approached industrial clothing specialist ‘M & F Morris’ to help them move their duffle mountain. Until then the company had specialized in gloves and overalls, but in an attempt to distance the coats from their military origins Harold Morris created the brand ‘Gloverall’ by neatly blending the names of his two main products. So successful was Gloverall at shifting the surplus coats that soon they had to start manufacturing ‘new’ duffles. The ‘Gloverall’ version retained the key elements of the original but some deft pattern work by Morris’s master tailor father removed much of the excess bulk, creating a more streamlined coat. The hood was made smaller, flaps added to the pockets and the string and wood toggles replaced by leather and buffalo horn for a more luxurious feel. Significantly they were now made from Italian Loden (initially Gloverall marketed their new coats as the ‘Loden’) the heavy wool cloth made in the Tyrol region of Austria and Northern Italy, and for the first time featured a lining – the modern duffle was born.  However, for purists, Gloverall still produce the ‘Monty’, a faithful reproduction of the original. In fact, in some countries, the coats are known generically as a ‘Montgomery’ rather than a duffle.

The duffle rapidly became not only a fashion item but also, due to no doubt to its egalitarian origins, a symbol of a somewhat Bohemian anti-establishment temperament and was adopted by many artists, actors and intellectuals, frequently of a left-wing leaning. From its peak of popularity in the late 1950s, the death knell for the Duffle could have sounded when Prince Charles was photographed wearing one over his kilt while at Gordonstoun school in the 1960s – not a good look and completely at odds with the sartorial spirit of swinging sixties.

But the duffle lives on. Perhaps its most consistent ambassador and certainly the most loved is that ex-patriot Peruvian of the genus Ursidae, Paddington, discovered in 1958, suitably attired, sitting on his suitcase at the station after which he was named. 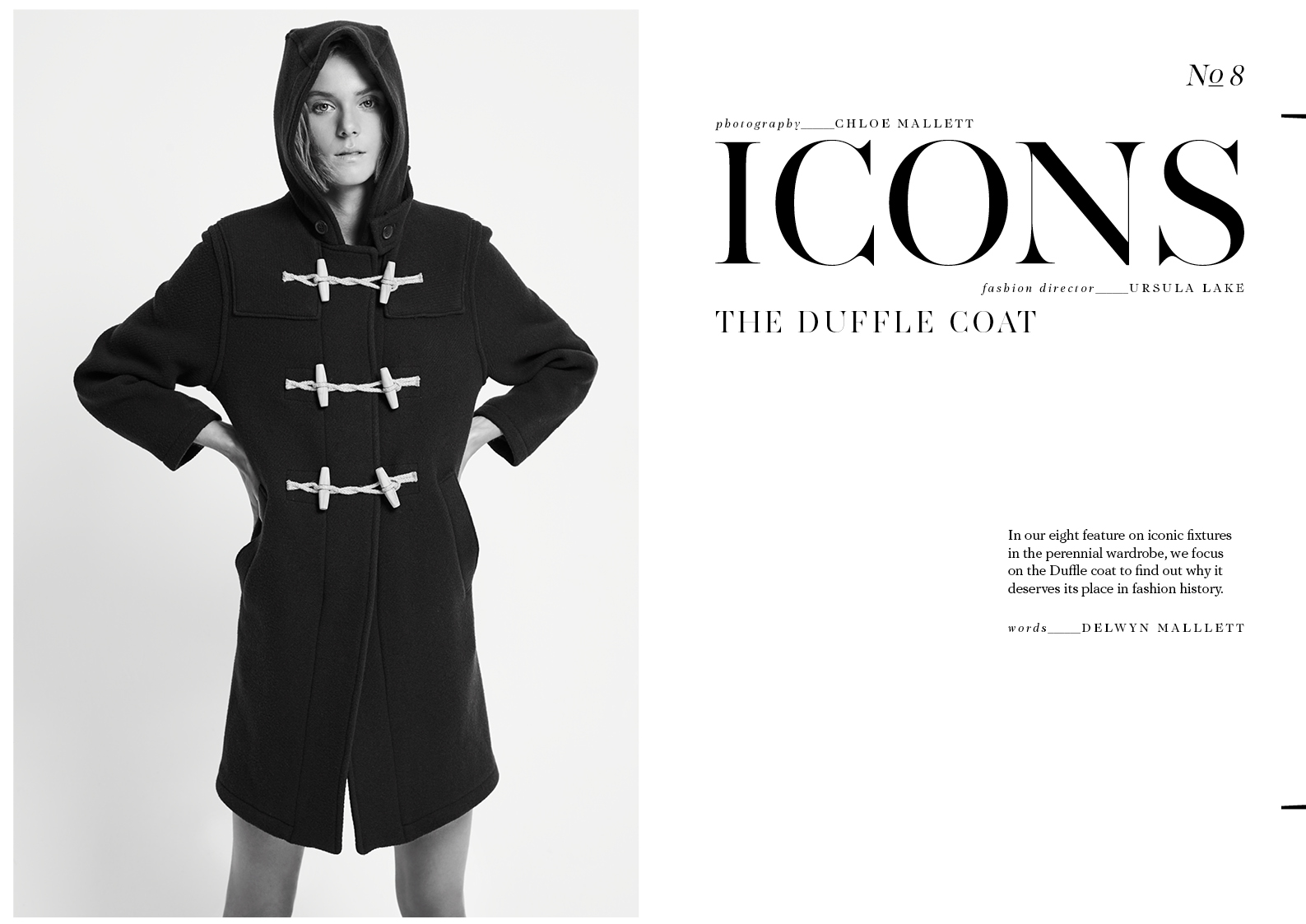 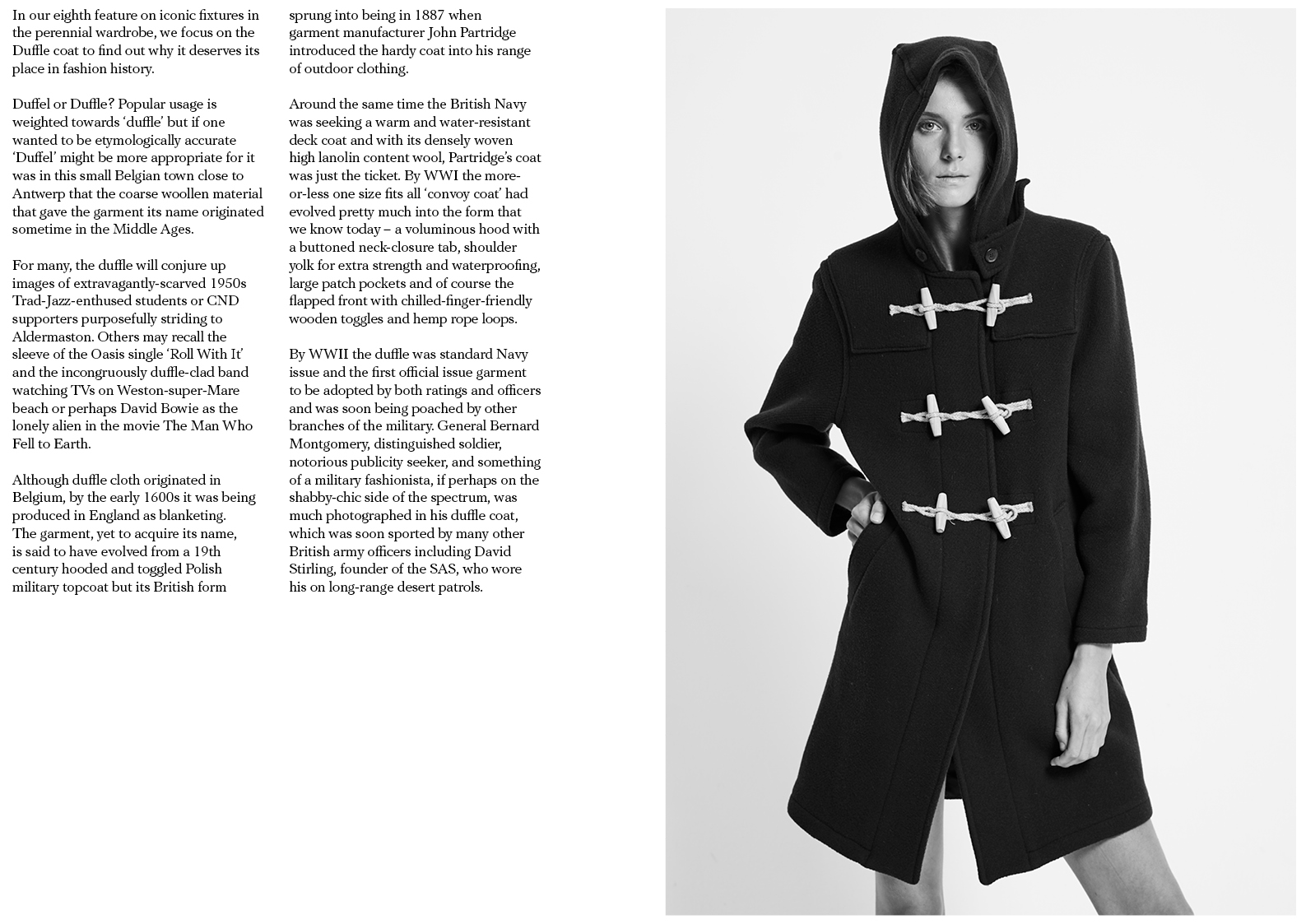 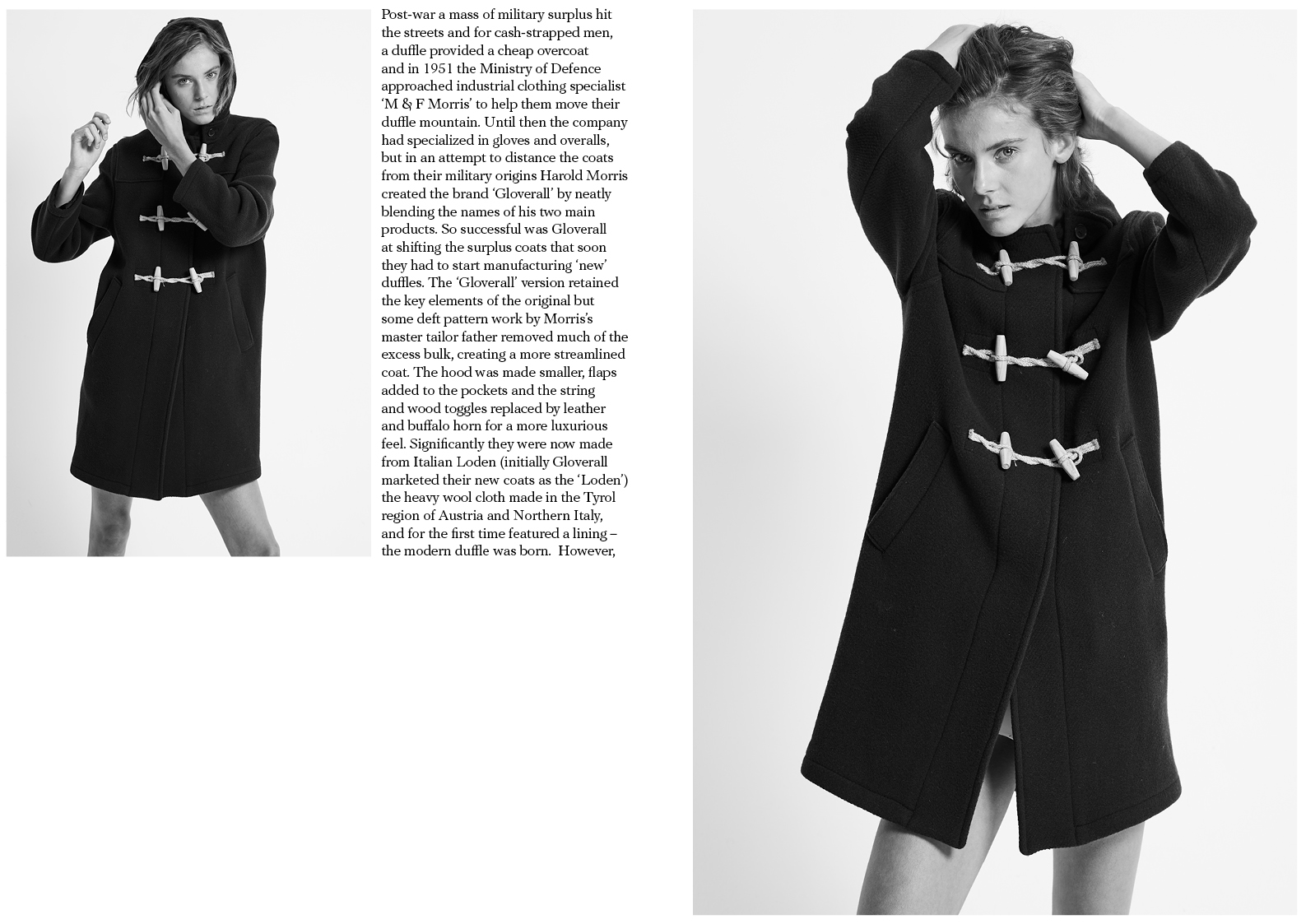 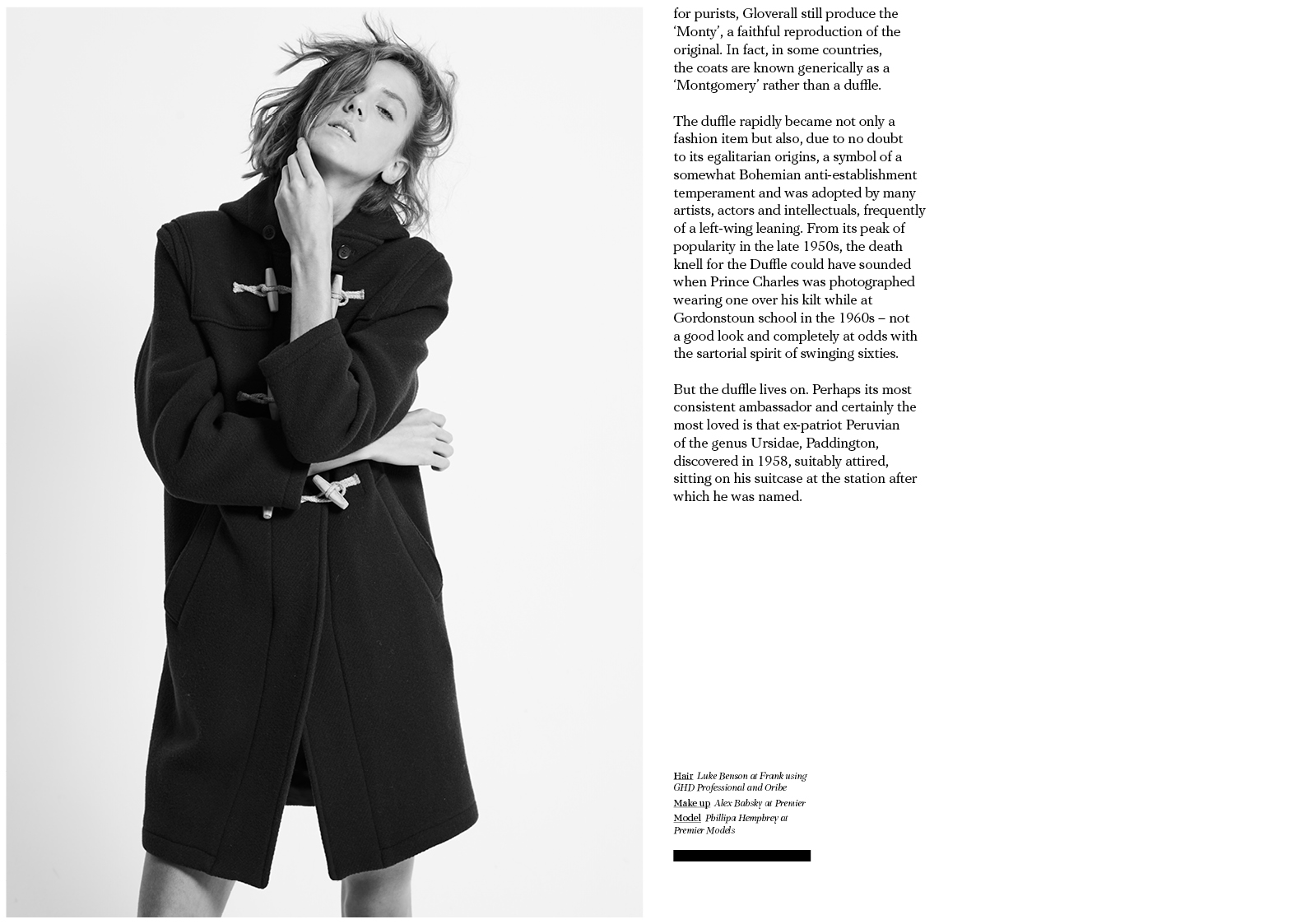