Ukrainian born Anna October’s story is a modern fable of grit and determination, hard work and tenacity. The twenty-eight-year-old designer chats to Make Magazine, charming us with the fascinating tale of how she built an international fashion brand from very humble beginnings, as a teenager in the culturally barren, Soviet-ruled Ukraine and learn the secrets to her success.

October launched her brand in the artistic city of Odessa at the tender age of nineteen while she was studying Fine Art, not fashion. She explains:
‘I was eight when I decided I wanted to be a (fashion) designer, that is when I did my first sketches and I never had any doubt after that this is what I would do, but the places to study fashion were not very good or didn’t seem very inspiring so I decided to study fine art as I felt I could sure I could move into fashion from there’

October had no access to fashion magazines or books as a child, even the museums and films available in Ukraine didn’t really feature fashion, so all her fashion inspiration came predominately from her vivid imagination. She was also inspired by her mother who she remembers as always being very chic: ‘she was always immaculately dressed and celebrated her own femininity; dressing in a simple palette of red, black and white accented with gold jewellery’

If she was naughty as a child, she would be reprimanded by her mother, who reminded the young girl that she should always act like a lady, an expression that inspired her in later in her career to use the hashtag #AnnaOctoberlady on her Instagram account.

Precociously talented, October started her own fashion label in her second year at art school and had her first show in Kiev. It meant she missed important course components and she was eventually asked to leave, but October remembers this as a positive: ‘ It was meant to be as I never wanted to have the diploma anyway! In Ukraine, there are no fashion houses so there was no one there for me to study under, so I had to start my own business. On reflection, if I started a business now, I don’t think I would have been able to do it, it would be too much and I would go crazy! But at that age, I was just fearless! Buoyed by the confidence of youth, she formally launched her label a few months later and the collection was bought by a store in the Ukraine and October was on her way.

Ra 13, an experimental gallery and retail space in Antwerp, was Octobers next retail conquest. She had visited the store on an earlier visit to the city and had set her sights on being stocked in the there. In a typical display of her tenacity, October determinedly and doggedly emailed the buyer for several months. He didn’t reply to any of her emails so six months later she returned to the store to find the buyer sitting in the store and approached him. She introduced herself, reminded him of her emails, said she wanted to work with him and invited him to her next show. He was taken aback but agreed to go to Kiev to see it. Needless to say, he bought the collection and when they opened a second store in Paris October’s collection was also stocked there. This, in turn, brought her to the attention of a much wider market and so she started to show her collection in Paris.

Shortlisted for the first LVMH prize in 2014, October’s chances were thwarted by the Ukranian revolution in the same year. The Russians occupied Crimea which meant that she was unable to finish her collection as it was too dangerous for her even to purchase any materials. Sadly, it also meant that buyers were nervous about committing to her collection, as she might not have been able to deliver the designs. However, rather than decamp to an easier city to work in, October has remained (and continues to stay) true to supporting her Ukrainian team. She says, ‘Everything is produced in my atelier in Kiev; it is important to me that I know every single person who is making my clothes and that we support women’s labour. I also am a mentor on an anti-Aids foundation in the Ukraine called, ‘Yes I can’ where I mentor women and promote social equality. In the Ukraine, there is both a problem with domestic violence and also a pervading mentality to favour boys over girls in the home and not to offer the same educational opportunities to girls. ‘There is still an idea that a girl’s highest ambition should be to get married and to be a good, quiet wife and mother. The initiative I work with is inspiring women to launch businesses and increase their confidence and to achieve whatever you want’

As a teenager who started her own business with no investor and totally alone, who began working at the age of thirteen, facing the opposition of convention which questioned her abilities and sanity in starting her own brand, October really is the perfect mentor to these women! She says that a key message that she tries to get across in her mentoring is that you don’t have to compromise your femininity and sensitivity to be successful in business. The two can co-exist happily in the world of commerce.

October’s love and background in fine art have helped to shape the collections that she now produces, particularly in her use of colour. She recalls that when she first started designing she made everything in monochrome shades but her this changed as soon as she started to study fine art. ‘Now when I am designing, I see the colour first and then the shape, I think this is because of my training but also because the colour really makes me happy! I like to add in strange combinations of colours and accent one colour with another, I like to play with this to make things a little bit strange and unique. I am very influenced by Henri Matisse because of his attitude and philosophy: he had a desire for his work to make people happy and this is how I feel about my clothes. I want to bring a special transformative experience to the wearer of my designs. They are not just practical designs to cover and warm the body! Dressing for me is an emotional experience. I don’t believe you cannot wear my white, transparent, white ruffle dress and not feel feminine and sensual. I think this is my role in the fashion world, to create something emotive in fashion: there are enough practical clothes in the world!

Inspiration for October is varied: ‘From season to season my work process changes, sometimes I am inspired by just words or maybe if I am in love I am inspired by that!. Sometimes in something more solid like an artist or a particular building or architect. A common thread is the work of Russian avant-garde artist like Kandinsky and Malevich and memories of my childhood: the textiles of the summerhouse or other romantic memories of my childhood. I was an only child so I had a vivid imaginary world and I used to escape the reality of my life. I think there is a great freedom of childhood where you are not afraid of making mistakes and as you get older you get more afraid of this, which is probably why I started my label when I was so young. I didn’t have any knowledge or experience of the fashion world but I just knew I wanted to be a fashion designer and a good one too. I wanted to be in London and Paris and everywhere and that innocence of childhood made it all seem possible!

October admits she is quite old-fashioned about the fashion industry doesn’t identify with a lot of the way that fashion is produced and consumed at the moment. ‘It’s not how I feel fashion should be: it’s like McDonald’s fashion and that isn’t interesting for me. They are not, to paraphrase her mother, dressing like a lady!

So whats’ next for October? ‘What is always next for me is to make my work better and though I am a creative I am always working on the business side of the label too. I am lucky that I enjoy both aspects of having my own company. I never doubt that the creative part of what I do will come and evolve and when the other challenges come, I accept that as part of the business and always seem to find the solution!

Creative, conscientious with an incredible work ethic doesn’t always sound like that much fun, but spending time with October it is impossible to not be impressed by her spirit and sense of humour. When we asked her to tell us a secret (to tie in with the theme of this issue) she tells us a typically fun story.
‘Yes! I woke up a bit late yesterday and so for breakfast I had red wine and fried potatoes, so my secret for you is my new revelation: if you ever wake up and find you don’t have coffee, don’t worry, just drink wine! 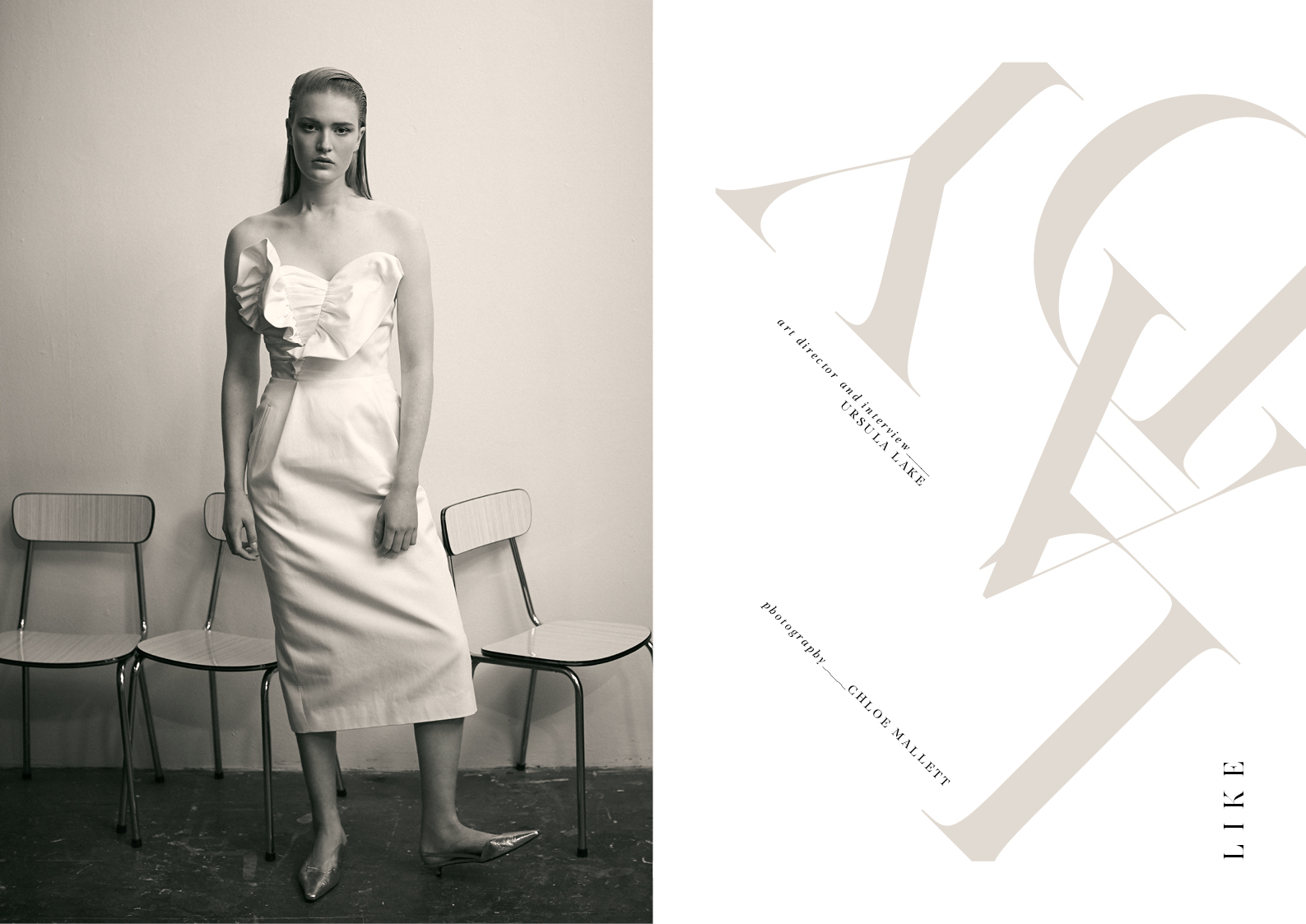 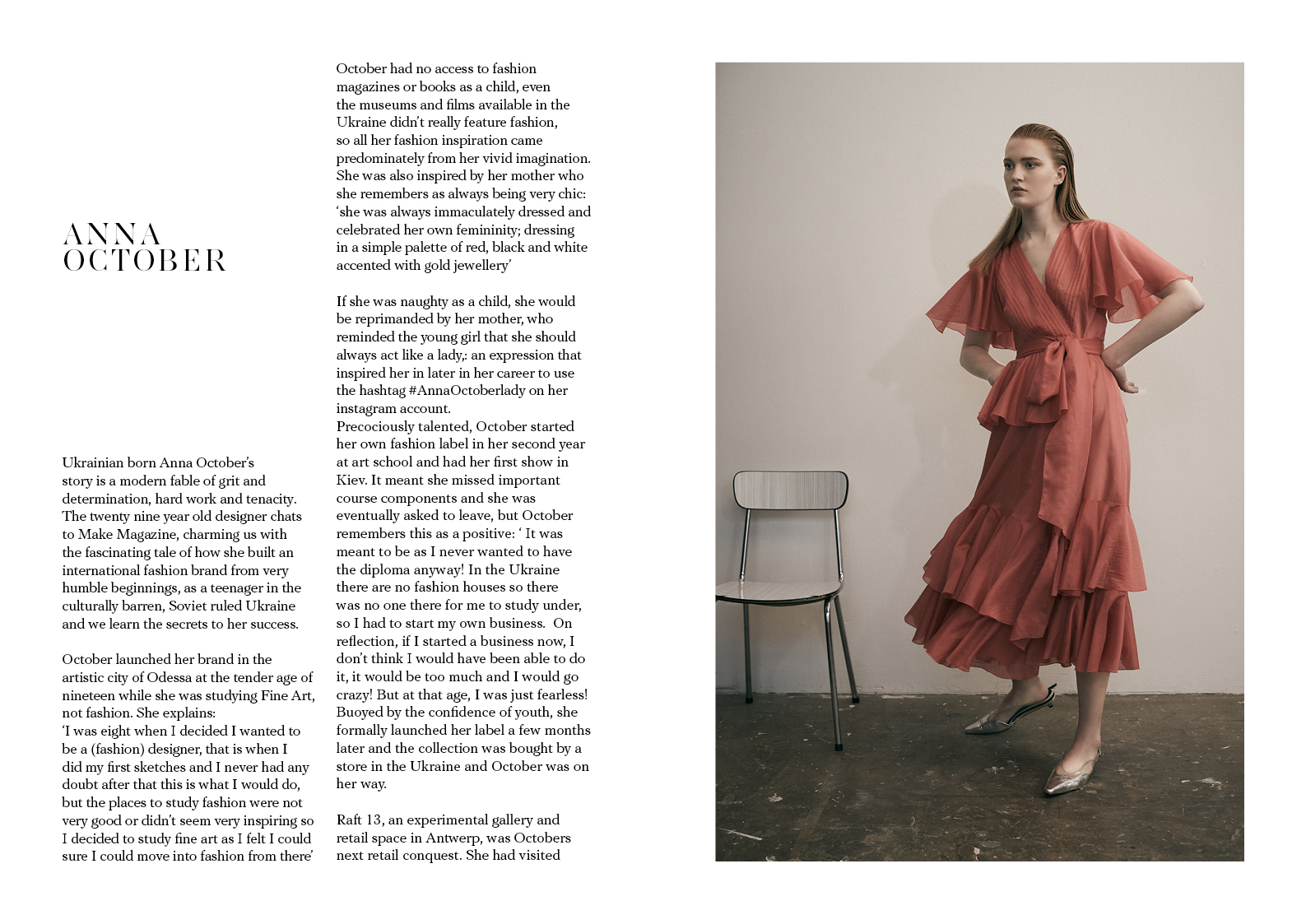 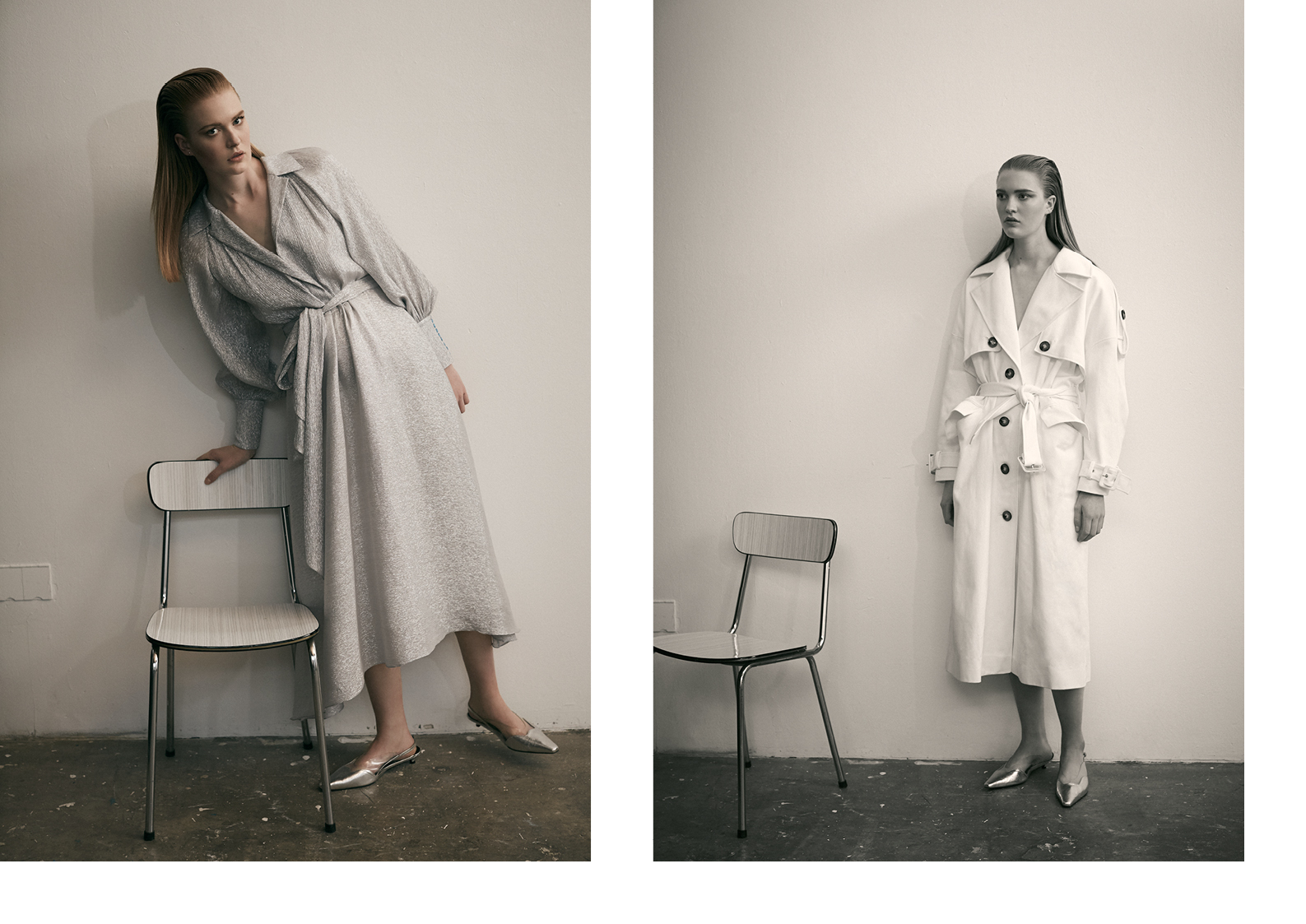 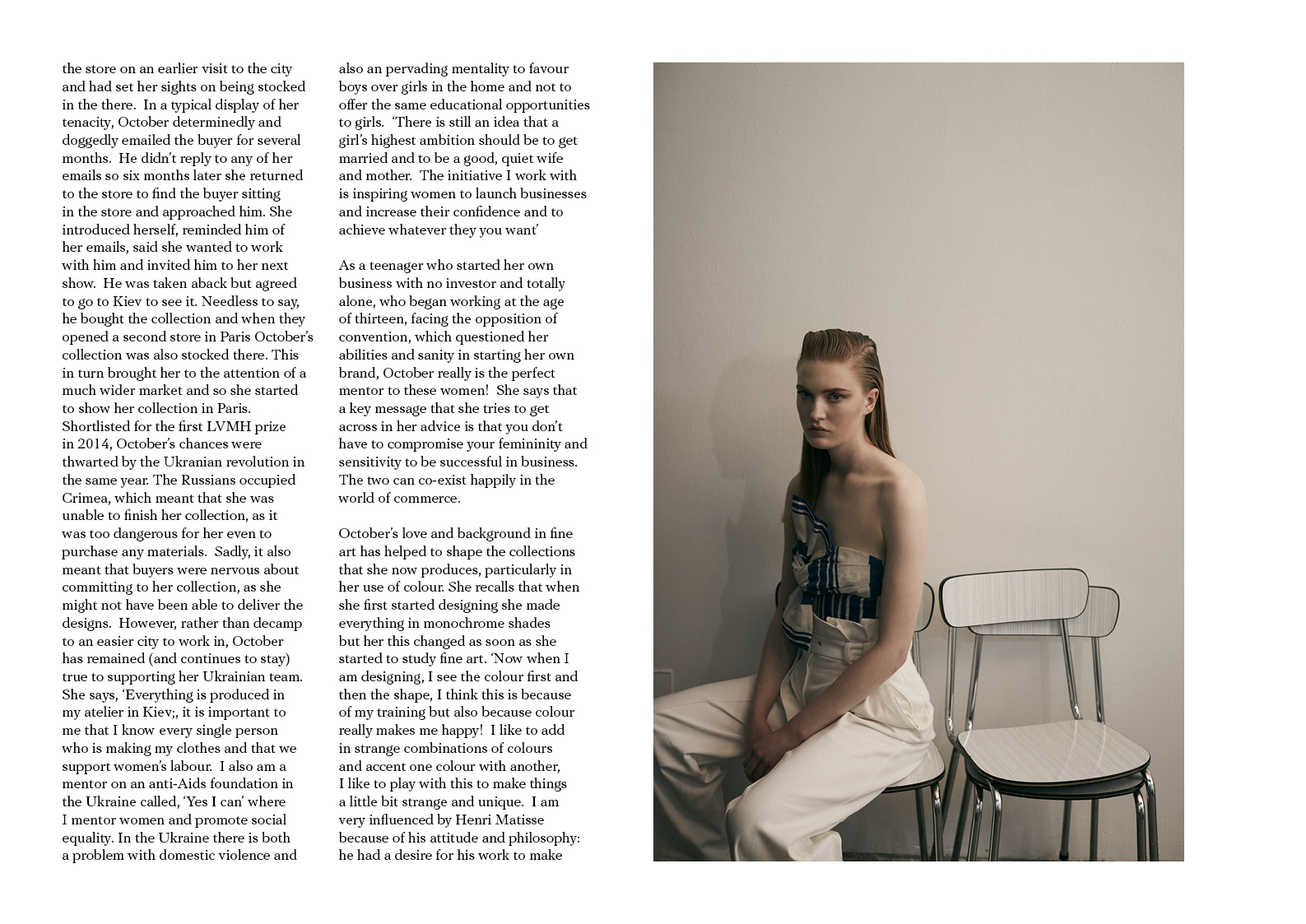 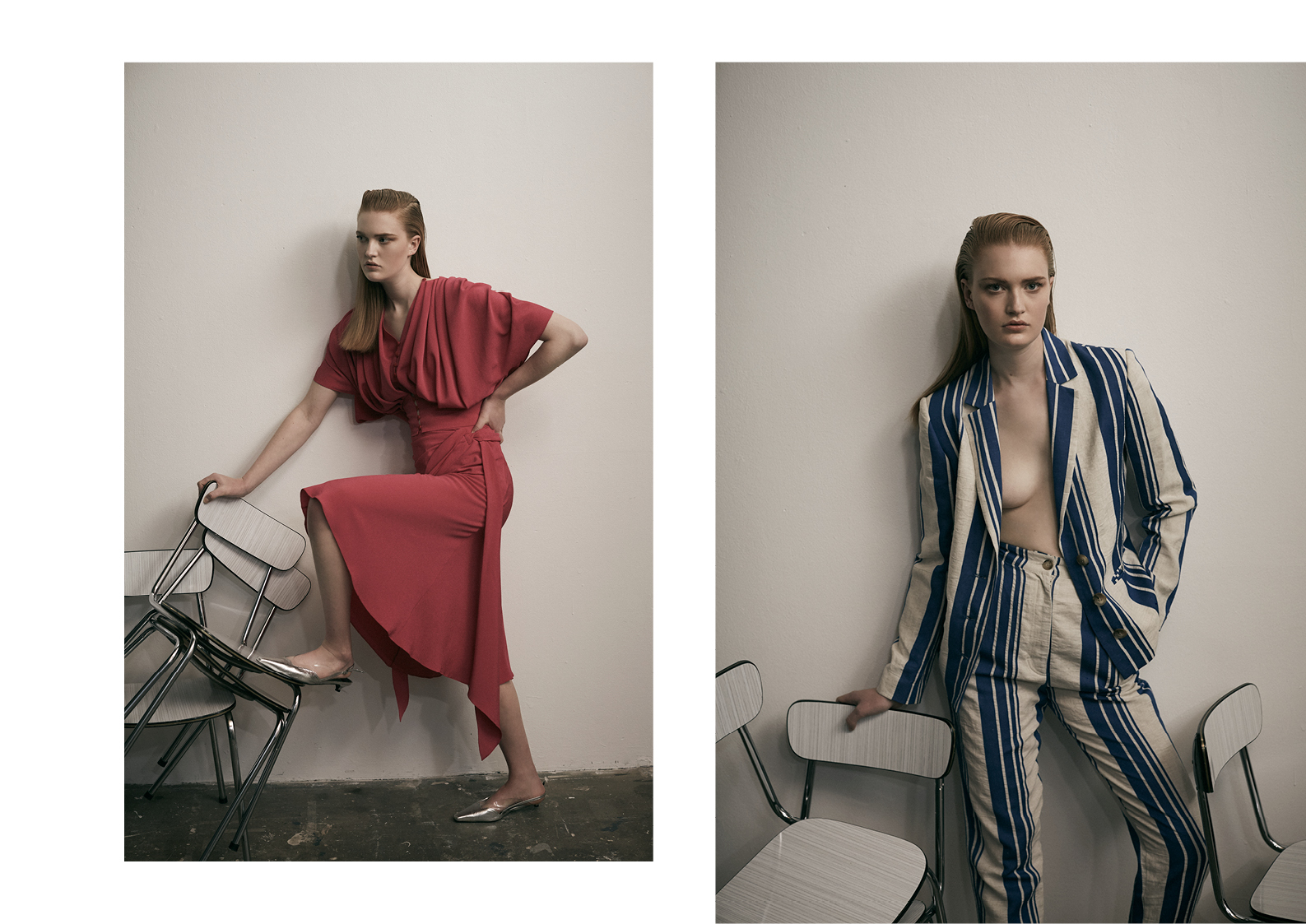 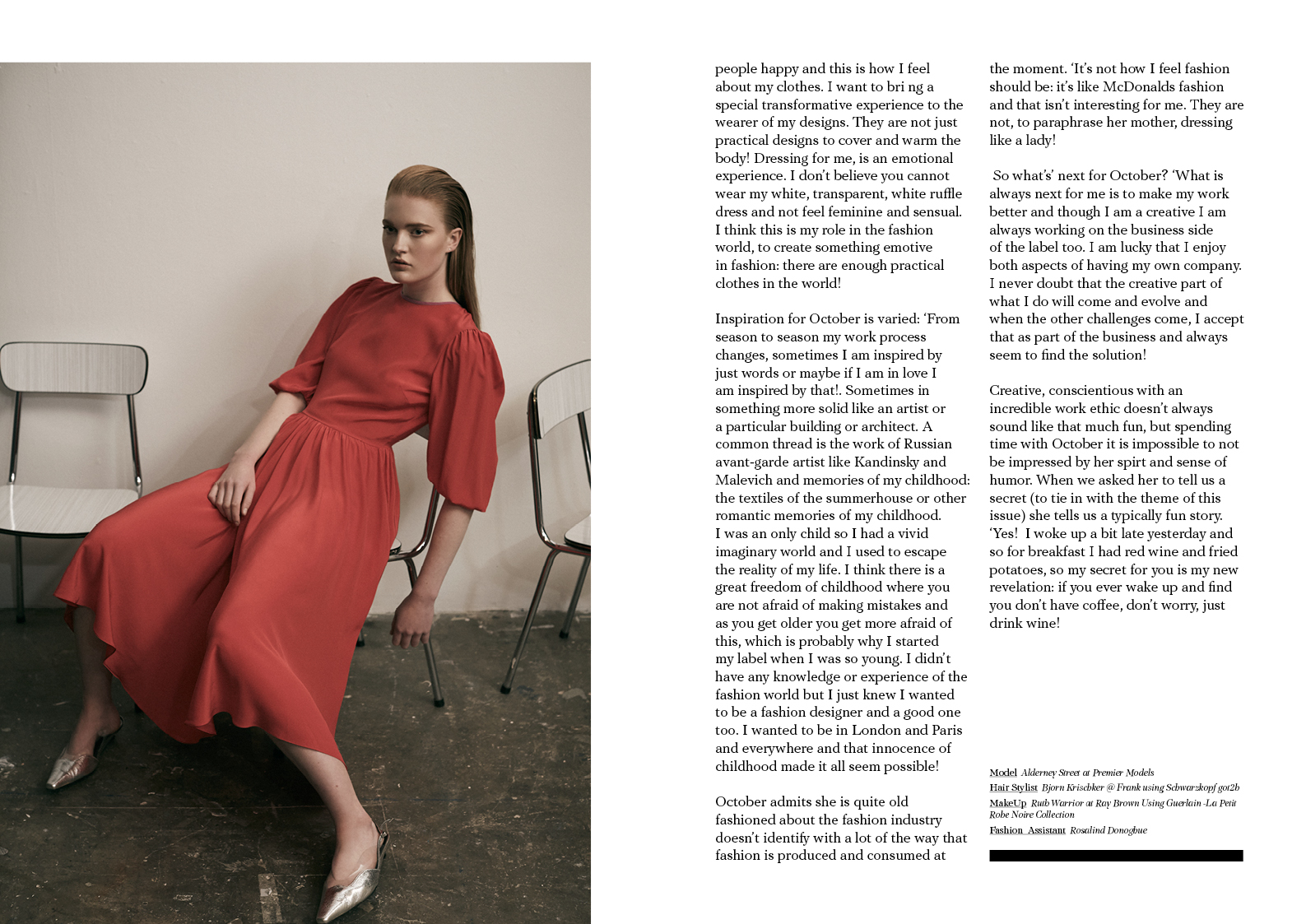