Photographer David Reiss (who shot the last issue’s cover of Make Magazine) doesn’t like to rest on his ‘fashion laurels’ but is often to be found exploring the road less travelled pockets of the world to satisfy his creative curiosity. Make caught up with him after a recent trip to India to discuss his life and his latest trip photographing the secret and remote world of the Changpa people.

Q. Tell us a little bit about yourself.

A. Whenever someone asks me where I’m from I generally need to pause and warn the inquirer about my complex answer: “I’m Filipino-Romanian by ethnicity, Australian by nationality, born in Abu Dhabi, have an American accent from growing up in International schools, have spent most of my life in Indonesia and currently live in London.”  It’s definitely a bit of a mouthful but it’s definitely a conversation starter.  But really that explains who I am too ; growing up and moving from place to place has made me an observer. But more than just a fly on the wall, my motivation is to see but also create, to mould a sense of dynamism and conception. So from finishing a University degree in Melbourne, Australia and working in the media and design industry, the progression into photography seemed inevitable.

Q. How did you find yourself in this remote looking part of the world? Where exactly is it, give us the full story

A. India has always been on my list of places to travel but it was never close to the top of the queue.  It is such a vast country with countless cultural identities that my previous perceptions were that as a whole it was a canvas too infinite to attract my attention.  But after meeting a new travel friend in a travel in Ethiopia, I was convinced to travel to Ladakh and Kashmir, specifically for a special Hindu pilgrimage in Kashmir called the Amarnath Yatra.  After completing that pilgrimage, I decided to travel to Ladakh and I had researched there were two unique and separate indigenous people that lived in the Ladakh region – the Brokpa (Brogpas or Drogpas) and the Changpa.  I chose the Changpa, their nomadic lifestyle fascinated me.

In brief, the Changpa are a protected ethnic minority that are semi-nomadic and a based around the Ladakh region but mainly East Ladakh, in the regions bordering China.  In fact, the Changpa people sparsely populate a vast region on the Tibetan plateau, which is mostly a part of China – but they are called a different name in the Chinese territory.  They are one of the few people that can cross ‘freely’ between the Indian and Chinese border – a much-disputed area and a politically sensitive topic in the region.  The Changpa are goat herders, but not any goat – those that produce the precious wool for cashmere or pashmina.  For the most part of the year, the families in small groups of five to ten households roam the large areas, mainly barren and dry, on the Tibetan plateau.  They set up camp in yak wool tents and move every three to four weeks to new pastures for the goats to graze.  This is all done at altitudes between 3500m to 5500m and during hot, 35C, summers and freezing, -20C, winters.  It is an extremely hard life and one that is increasingly being rejected by their youth.

On my travels in the Changpa territory, I stayed with two communities – one community for three days and the other for four.  We didn’t sleep and stay in any of the family’s yak tents, so as not to disturb their private life, but set up camp within their settlement in our own tents.  Though the Changpa seems remote and nomadic, they actually have to interact with the outside world quite a bit.  Each family generally has a base ‘home’ in one or more Ladakhi towns.  They have always historically traded with the greater population of Tibet and Ladakh and were the main source of the salt and wool trade there.  More recently, due to an increase in adventure and cultural tourism, the Changpa are engaging with the western and local Indian tourist world.  One of the communities that I stayed was near Lake Tso Moriri which is a hot spot for hikers and bikers.  However, a large part of the Changpa territory, or where the Indian government has designated them to roam, is in restricted zones close to the Chinese border into which, unfortunately, no foreign tourist, including me, is allowed to venture.

In the days I spent with the two communities of Changpa, I captured a small snippet of their nomadic cycle and everyday life.  Each family owns between fifty to two hundred goats but can also herd sheep (non-pashmina producing) as well.  During this particular time of the year, the female and male goats are separated – one or two members of the family spends roaming alone through the land with the male goats – following their grazing patterns for months.  The rest of the family and community herd the female goats.  In the morning, they milk the goats as well as the yaks the family owns. The Changpa have an interesting method of milking, where all the goats are tied in a line, secured head to head so that milking is quite efficient.

A member of the family, male or female, then goes out with the goats on foot, travelling to various grazing grounds about 10km to 20km away and returns just before sunset.  The rest of the family spends the day doing daily chores – the women make various forms of feta-like cheese with the goat, sheep and yak milk.  They also spent time weaving and taking care of the younger children.  The men and women also spend the afternoon looking for any form of dried bushes to use as fuel for fire but mainly they also search for and collect sun-dried yak turd, which is the main source of ‘firewood’.  When the goats return in the afternoon from the day of grazing, they are herded back into their stone-walled pens and possibly milked again.  The families then settle in for an early dinner and salt tea (an interesting concoction of tea with yak butter – making the tea slightly salty) and repeat the process the next day.

After four to five weeks, when the community decides that the grazing grounds in the area have been exhausted, everyone packs up their tents and belongings, loads them onto the yaks and even the goats and travels 50km to 100km to another destination.  It is the classic life of a herder, where life is dictated by the animals they tend, but the fact that it is done in such extreme conditions and in such isolation makes it fascinating.

Q. Any good stories from your experience, happy or sad? What were the people like? Could you communicate with them easily?

A. There are always some interesting stories on these trips. One of the memorable ones collecting and rolling up fresh yak turd with one of the Changpa families to get permission to take a photograph of them.  It sometimes can be a challenge to convince anyone to take a picture taken, but to get approval is the number one rule which I believe all photographers must abide by when doing this type of travel/social documentary imagery.  In this particular instance, the family was in the middle of ‘making their ‘fire-wood’, which is sun-dried yak turd (since there are no trees in the region).  After much coaxing, I indicated, through sign language that I would help them with their daily duty in trade for some pictures of them.  So I definitely got my hands down and dirty, rolling up about 50 football-sized yak excrement and then flattening them on large rocks to dry in the sun.  By the time I was ready to take the photos the family were trying to break the deal and were starting the pack away for the day so I had to quickly pick up my camera, hands covered in loveliness, and quickly get a few snaps!  Other difficulties I had to endure were the generally high altitude woes – the communities were at a height of 5000m so walking is the equivalent to running. Thus running after goats and the herders was an extreme challenge. Nonetheless, this was all offset by meeting and being allowed into each individual family – capturing their life and faces and also hearing their stories (done through a guide/translator which fortunately I had organised in Leh – the capital town of Ladakh).

Q. Anything surprise you from your experience?

A. Coming back from theChangpa people and trying to piece together memories from the images I captured, the one thing definitely struck me, other than my high tolerance to withstanding the smell of sheep and yak poo  (hats off to any livestock farmers!)  is that barrenness is beautiful.  The life that the Changpa lead in the conditions and environment they have to endure is definitely tough and extreme but the memory of sitting with one of the herders all day as he watched his goats graze, with him humming from time to time and staring into the distance, struck me at that moment as so beautiful despite the hardship that has passed or the difficulties to come that it made me feel connected to a time and place, possibly only familiar in past lives. 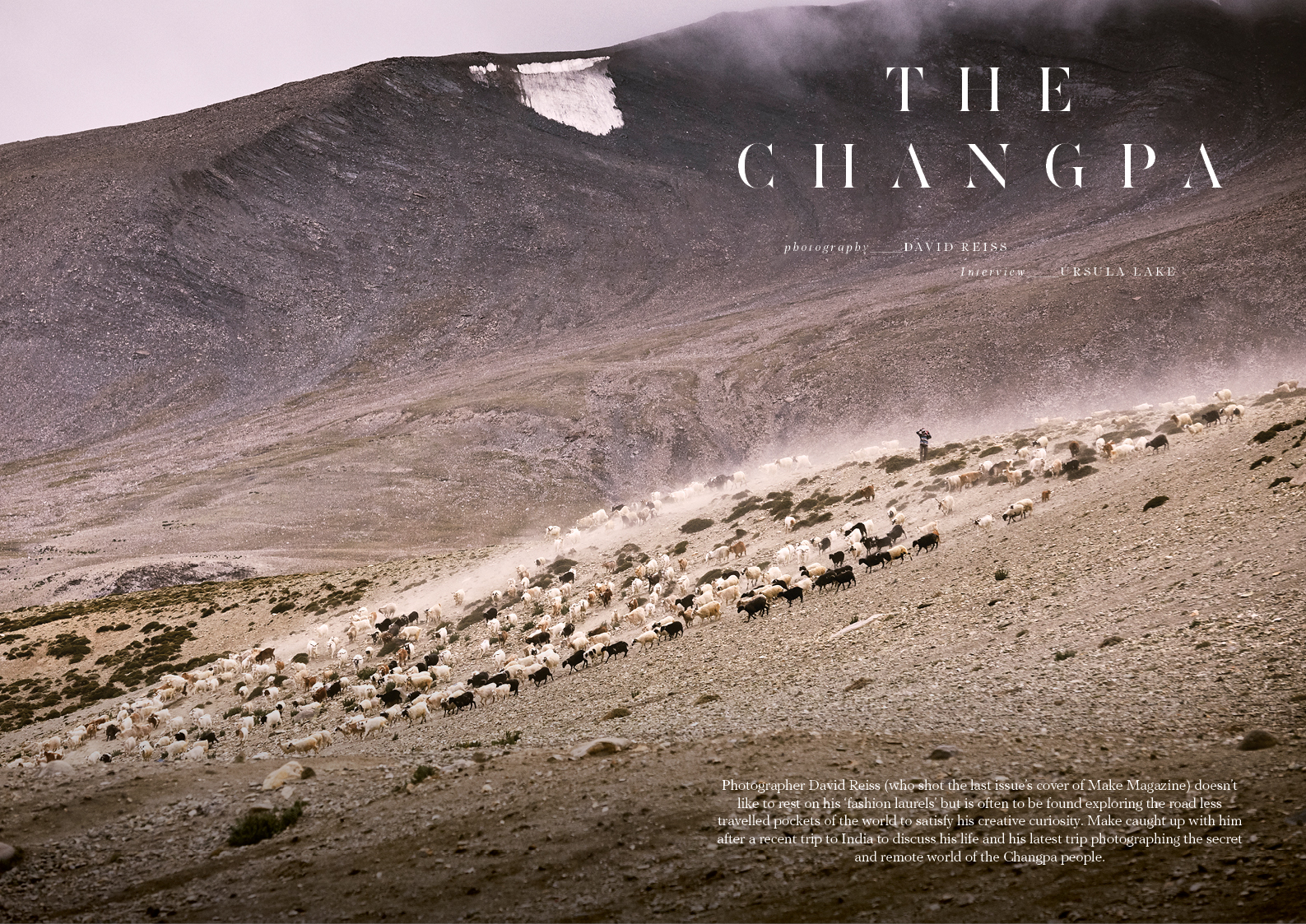 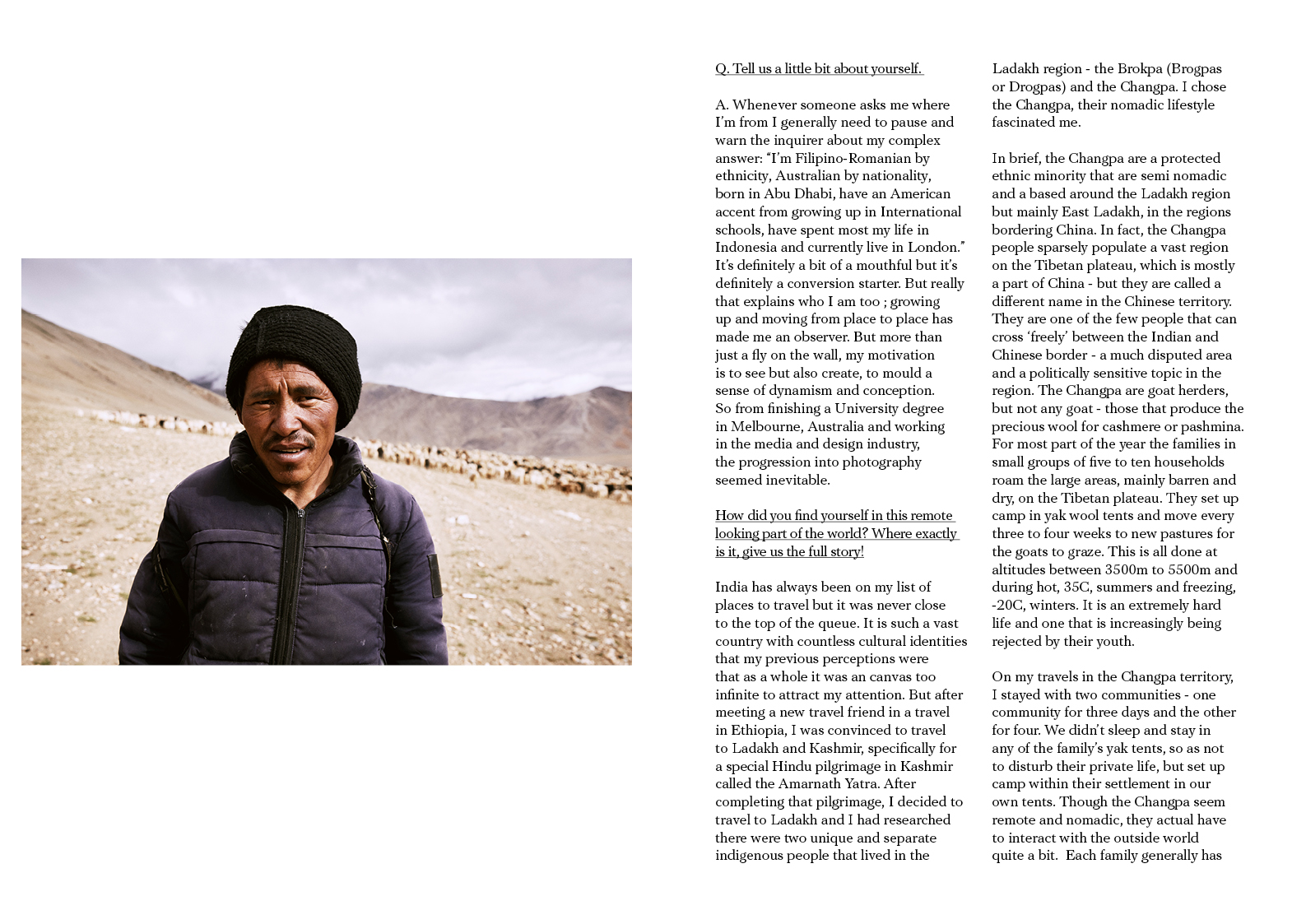 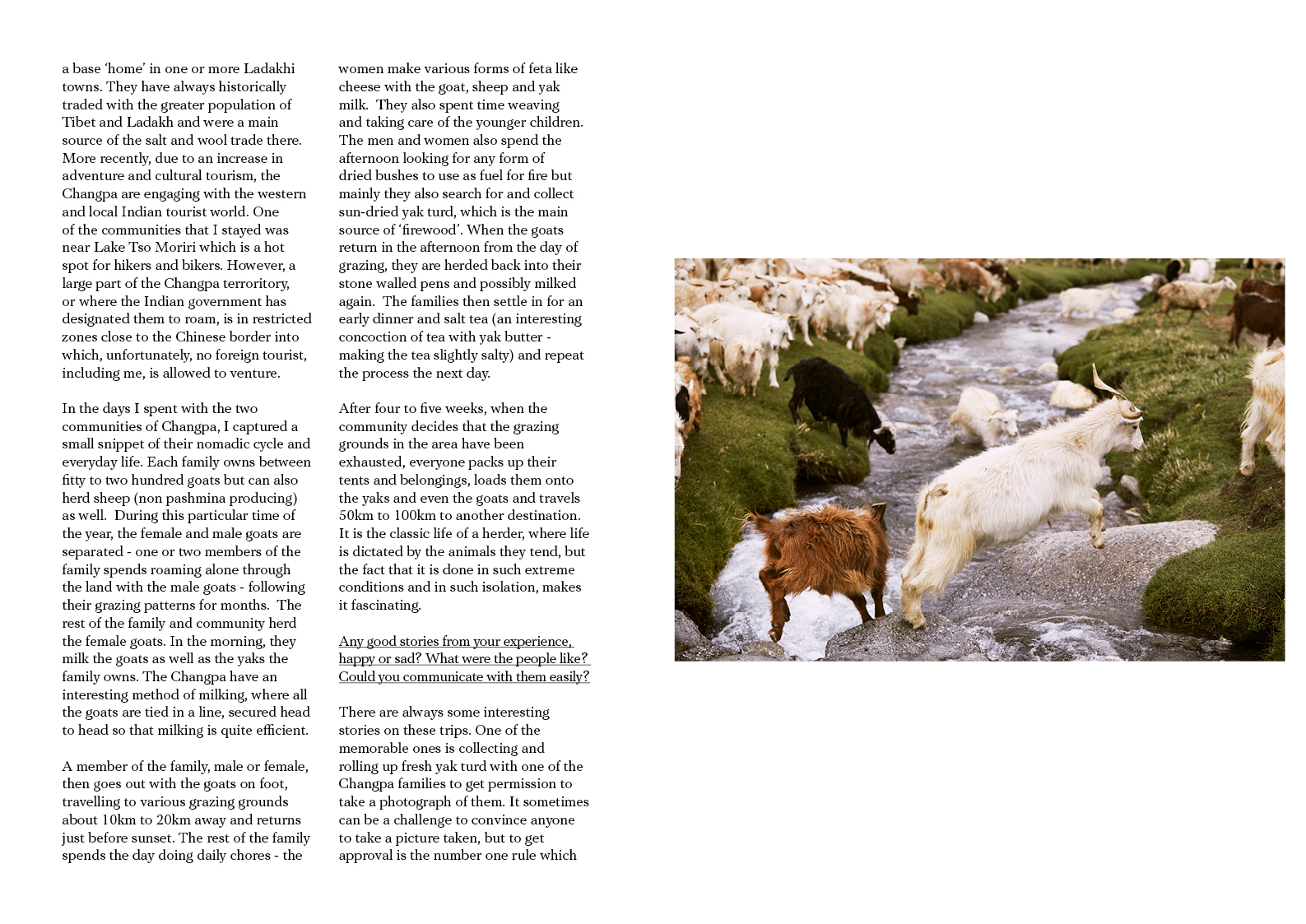 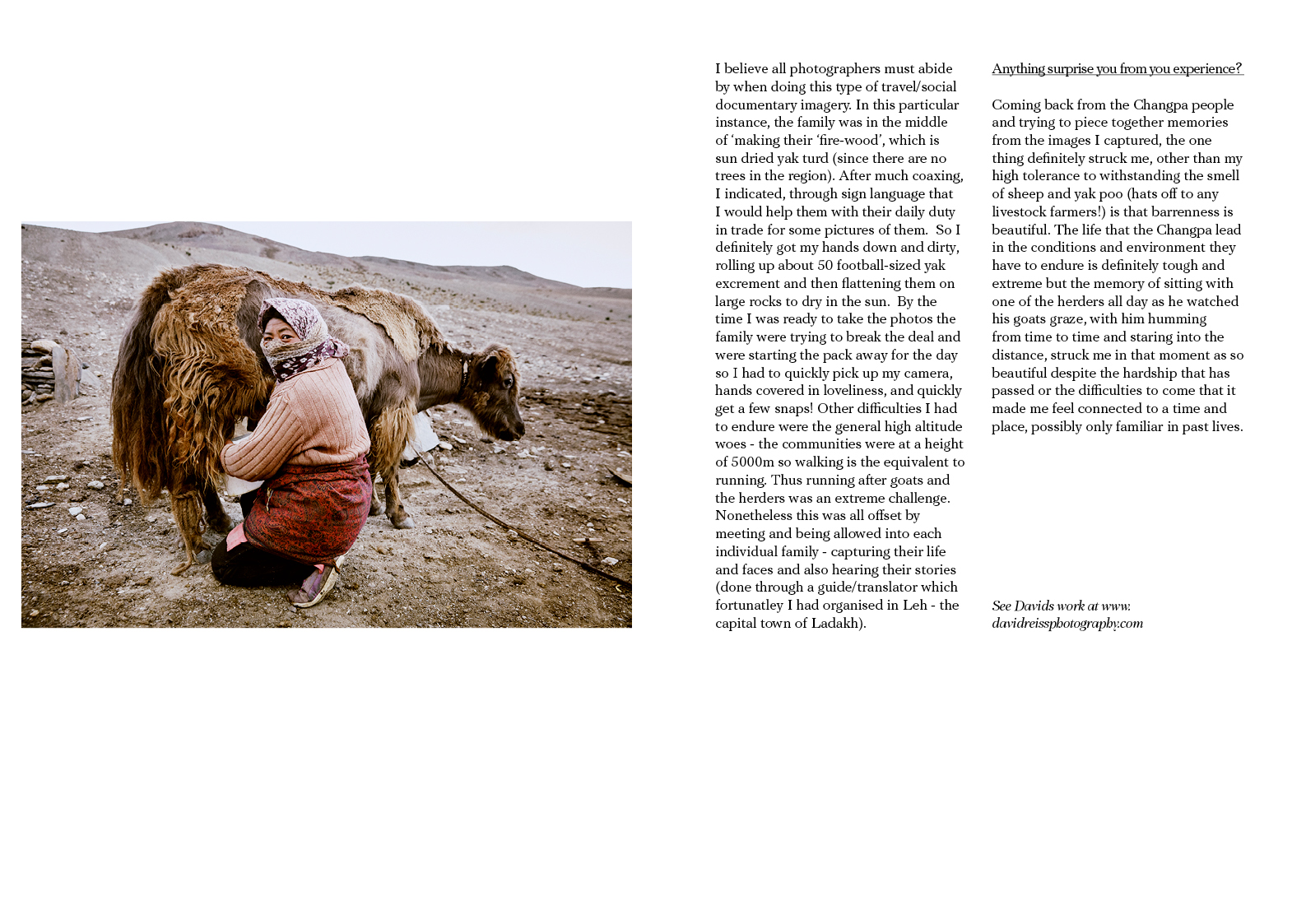 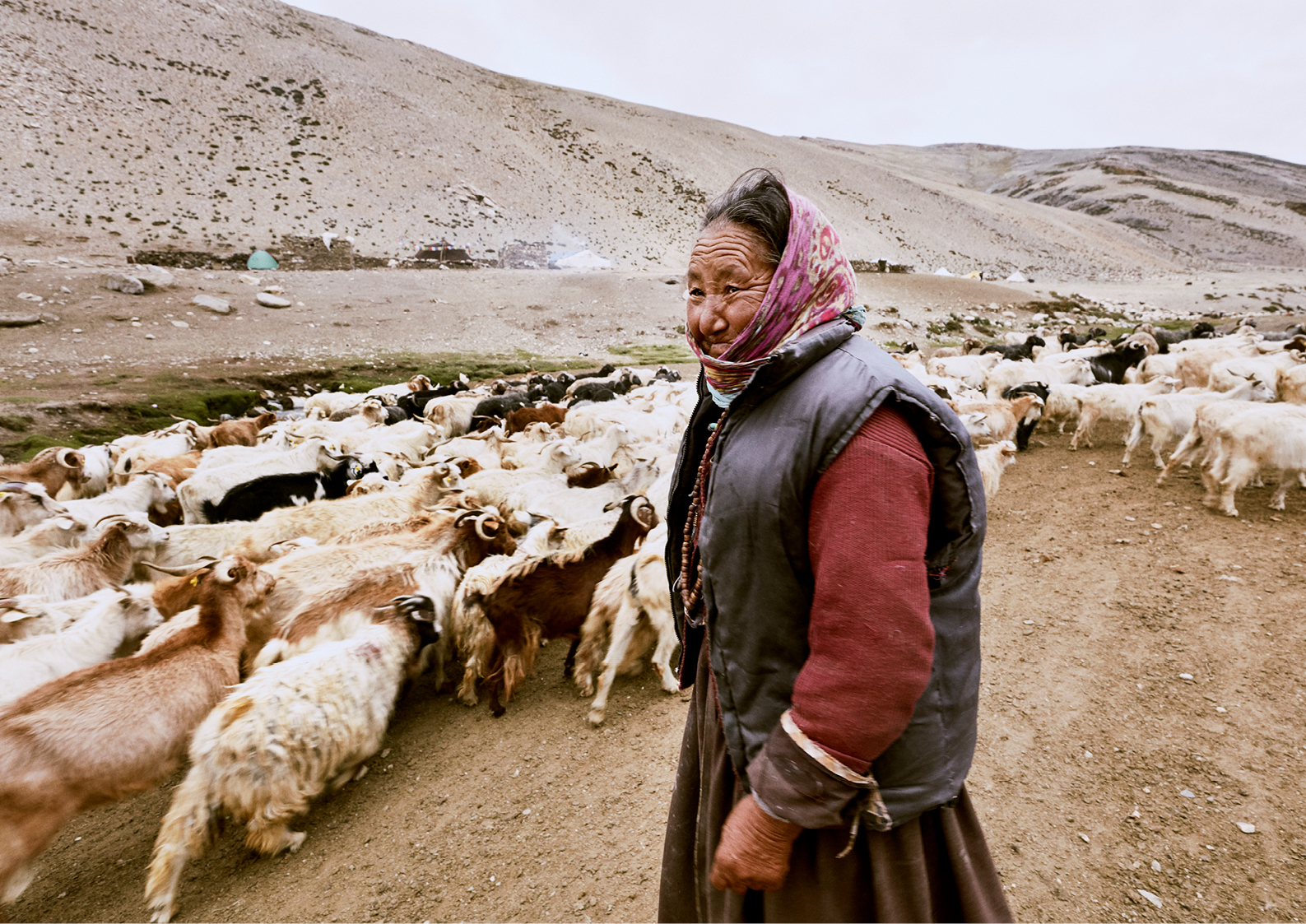