Make met up with the multi-talented Zawe Ashton on the day of the first night of her new west end play, Betrayal, where she co-stars with actors Tom Hiddleston and Charlie Cox. Though primarily known as an actress, Zawe has also directed and produced her own short films, written a book (to be published in April 2019) and is also an award-winning playwright. Make chatted to Zawe to find out how she manages to juggle such a busy life.

Betrayal was written in 1978 by Harold Pinter and is based on the writer’s own affair with the journalist and presenter, Joan Bakewell in the 1960s. Unusually, the play tells the story of the affair in reverse: the play’s first scene takes place years after the affair has ended and the last scene shows how the affair first started.

Q. What interests you about the play and your role?

A. I think the shift of power between the characters in it is very interesting. The play doesn’t belong to any one character at any point. I did a lot of research before we started rehearsals, as I wanted to feel I was getting as close to the writer as possible in order to try to understand his intention because, in truth, I don’t think it’s a play about an affair. It’s really about power and a power struggle and the mental violence that we bring on ourselves and take out on other people.  I was also intrigued by the fact that it has been described as a feminist play, which I now really buy into; my character decides that she doesn’t want or need either of these men! This production has put the play into a contemporary setting, but Pinter’s words are so timeless that nothing else has needed to be changed.

Q. Is there more freedom to portray a character how you would like to in the theatre as opposed to film or television?

A. When you are doing a film, you have the director staring at you the whole time from the other side of the camera, but there is a moment in the theatre where you take ownership of your role, the director isn’t there every night. As an actor, I am constantly trying to find my own space in the work. I think that comes from a lifetime of being projected on to and the realisation that I have spent a lot of time pretending that I am less intelligent than I am and that I have no idea about something when the answer to whatever needs to be solved in this scene is actually really obvious to me. But you recognise that you are an acting cog so you must be the screen on which everyone else’s thoughts and dreams and visions are projected, and that is also brilliant.

Q. You are involved in so many aspects of this branch of the creative arts; tell us about your multifaceted work.

A. Originally, I didn’t think that all those different things were in my skill set because I had spent so long ignoring those impulses as an actor, so it has been great to be able to step into these other interests and acknowledge that I have a feeling for writing and directing. There was just something saying to me that I could do the other things that I was interested in and to have the courage to do it all. I think this actually links back to the play (Betrayal) as the character I am playing is a mother of two and is also a successful gallery owner. I did a lot of research into women’s lives in the 1970s, so know my character is unusual for that time.

Joan Bakewell talks in her book, Centre of the Bed about how avant-garde her life was considered; she felt that the door was not left open to her as a journalist after she had had children. So I have thought about transporting that woman from that time to the present day and thinking about the differences. I have realised that it comes back to the individual. Thankfully, women are now finding it much easier to say, ‘ I can do that’ and I think, ultimately, that is how we bring about change.

Q. If you had to choose one discipline, acting, directing, producing or writing, which would it be? Or would that be too difficult?

A. At the moment it would be impossible. I think I would just have to say that I am an artist. I wouldn’t want to choose as many of the people I respect often have a multi-disciplinary aspect to what they do. My directing came out of my writing, but what I have also realised is that I enjoy looking after other actors. Directing for me is a very matriarchal space; it is the true definition of multi-tasking! Really you are micromanaging other people’s egos in the extreme. It’s like having one hundred and fifty children when you are on a set and that is why I find it surprising that there are not more female directors. I feel that men can often do the role in terms of the nuts and bolts, but they often lack the nurturing aspect that women have.

Q. Is it important for you to like the characters that you play?

A. No, never. I like the fact that a lot of my characters have had moral ambiguity. I don’t ever want to be concerned with being liked. I don’t feel under any pressure to represent a likeable person.

Q. On paper, Vod (her infamous character in Fresh Meat) is unlikeable and yet she is everyone’s favourite character, why do you think that is?

A. Obviously, a huge part of her success as a character is the writing of Jesse Armstrong and Sam Bain but I think when they cast me they must have got me on a good day! Vod is totally unapologetic and not at all interested in being cool. I think Vod is so brilliant because she is in the moment the whole time.

Q. Did you get the opportunity to mould her character with the writers?

A. The casting for the role was wide open and so her character was really open to interpretation. I think, somehow, I understood her and I was lucky to have a lot of influence with her voice, costume, hair and physicality. All of the characters were given the opportunity to create a lot of there own distinct traits. She came out of left field and there wasn’t anyone like her on television. At the time, I thought I had killed this show for the other cast members, who I thought were doing really well. It was partly because people who really know comedy surrounded me and I was coming from a more classical ‘dramatic’ background; I don’t know the science of a joke. It was one of those moments that wasn’t supposed to go right but it did.

Q. Tell me about Velvet Buzzsaw, (her new film on Netflix where she co-stars with Jake Gyllenhaal and Rene Russo)

A. It was the time of my life, are you kidding? Playing the lead in a Hollywood movie! I don’t often think this about films, but I think it’s going to age really well. It has enough of a wink to the audience in the present day, but also has so much B-movie influence, and then it has a real futuristic and prophetic quality to it about the nature of greed. I think it will become a cult-classic, but of course, it has really divided opinion. We always knew it was going to be like that, Dan Gilroy, the director is a provocateur. One the most interesting aspects to me about the project was working with Dan who is a real ‘punk’ but who has a commercial platform (with Netflix) and those things combined, for me, is a creative sweet spot.

Q. How do you feel about Netflix and the way it is changing the way we consume information and entertainment?

A. I think it has predicted our needs before we knew them ourselves. In a recent interview, someone asked me whether our reaction to Netflix is the same as a dog hearing its owner saying ‘walkies’, i.e. you say yes, and you want to go, no questions asked! You know it’s going to be great quality, it’s democratic and I respect it. I have never watched so much stuff at home and in truth, I am a cinema lover. The serial aspect of it has exploded and actors love doing it as its episodic; you get to stay with a character for a longer period of time, and better still, you are in work for longer! People watching films on iPhones still makes me want to cry, but I realise I have to get with the times!

Q. How do you feel about becoming something of a fashion icon?

A. I love it, it’s great working with a fellow artist like my stylist Steph Wilson (who styled this fashion shoot) as she inspires me in what I wear. I feel that I am able to represent myself in some way through fashion, which is something that I have wanted to be able to do for a long time. I had struggled in the past to get it ‘right’. I think because of being a character actor, I have become a clothes-horse! I’m able to take that skill into fashion and take on the personality of the clothes, whether I am wearing something really dramatic, or masculine or frilly and romantic; they all feel like me. That was an interesting aspect of doing Velvet Buzzsaw as the clothes that people wear in the art world are even more extreme than that of the fashion world, it’s elevated to an art form. When I went to Freeze (the art fair) for the first time, my eyes were on stalks! I felt really underdressed and I wished I had really gone for it.

Q. Do you enjoy dressing for the red carpet?

A. Not always, sometimes it’s not that enjoyable to be honest, but I do love getting dressed up for myself. What has been great about being styled for these events is the friendships that I have made as a result. I have been wearing a lot of Roksanda for the Velvet Buzzsaw premieres and she has become a personal friend. When I started out, I was one of the people that no one wanted to dress and that was quite disheartening. No one ever warns you about the politics of the red carpet, so the people who dressed me early on without question, are the people I really hold close to my heart like Hussein Chalayan, Roksanda and Emilia Wickstead. I try to make sure that my actions and choices have a purpose, so it makes me feel so much happier to wear, and therefore promote, the clothes of friends on the red carpet and repay their support of me.

Betrayal runs at the Harold Pinter Theatre until June 1st

Velvet Buzzsaw is available on Netflix. 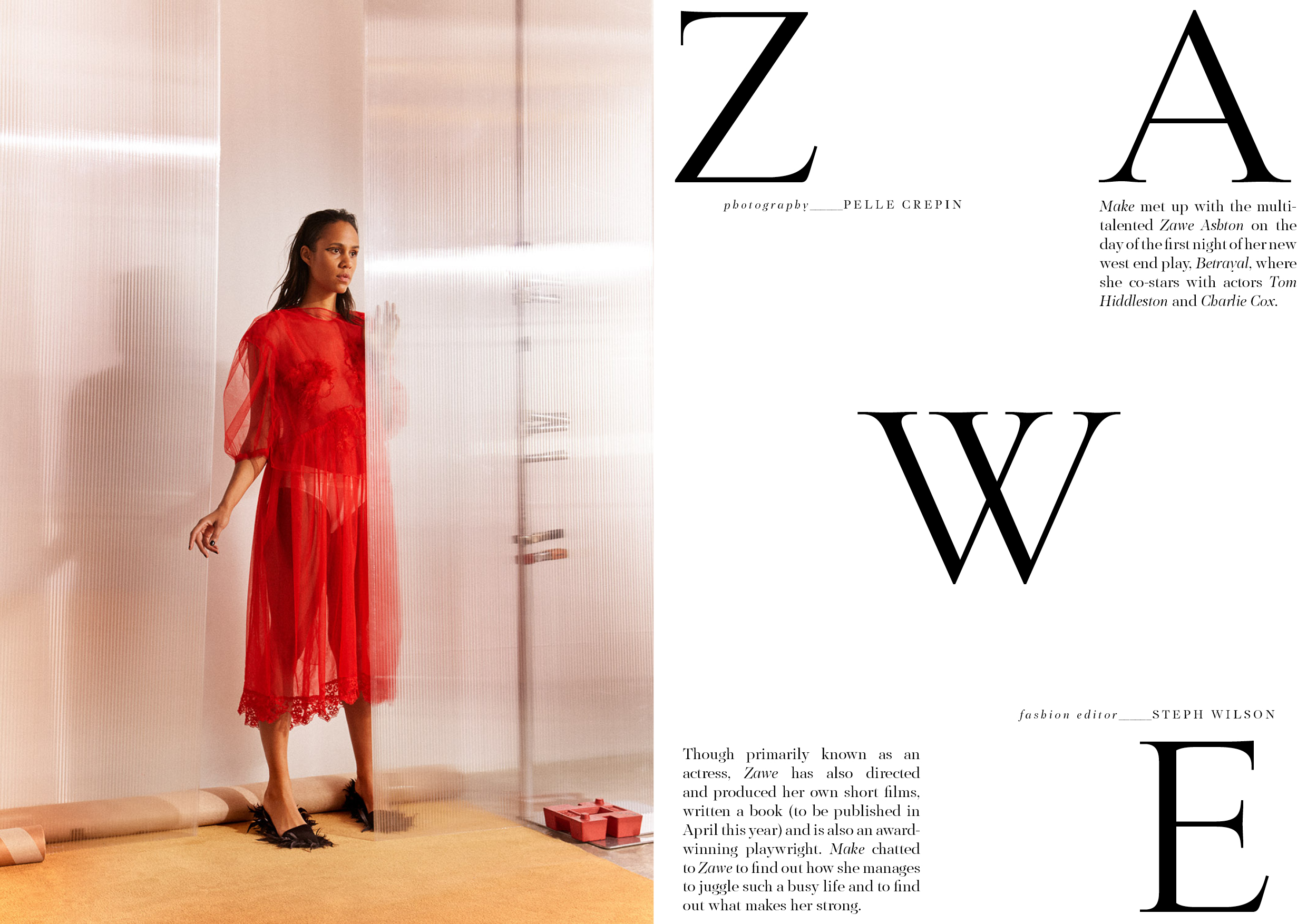 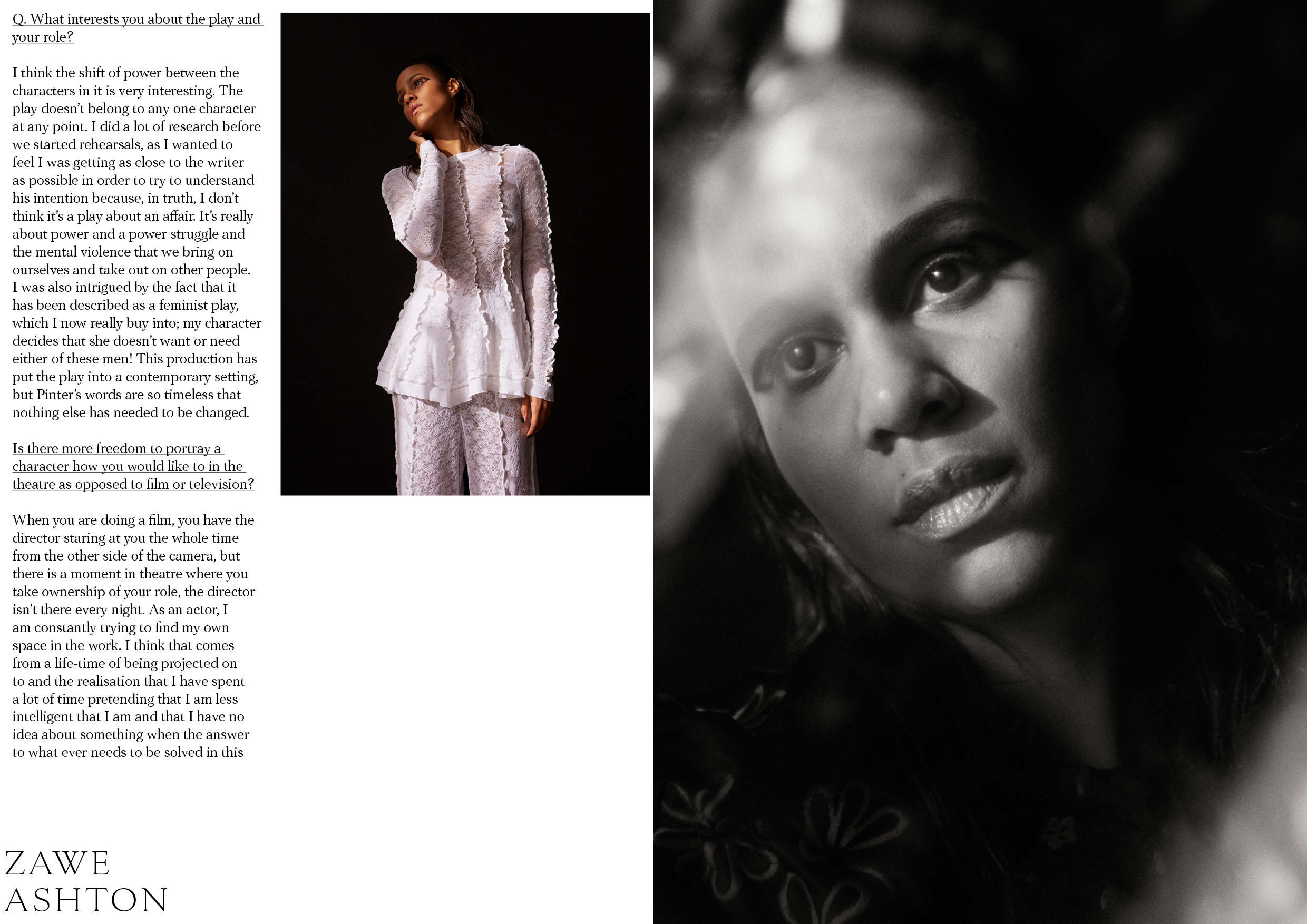 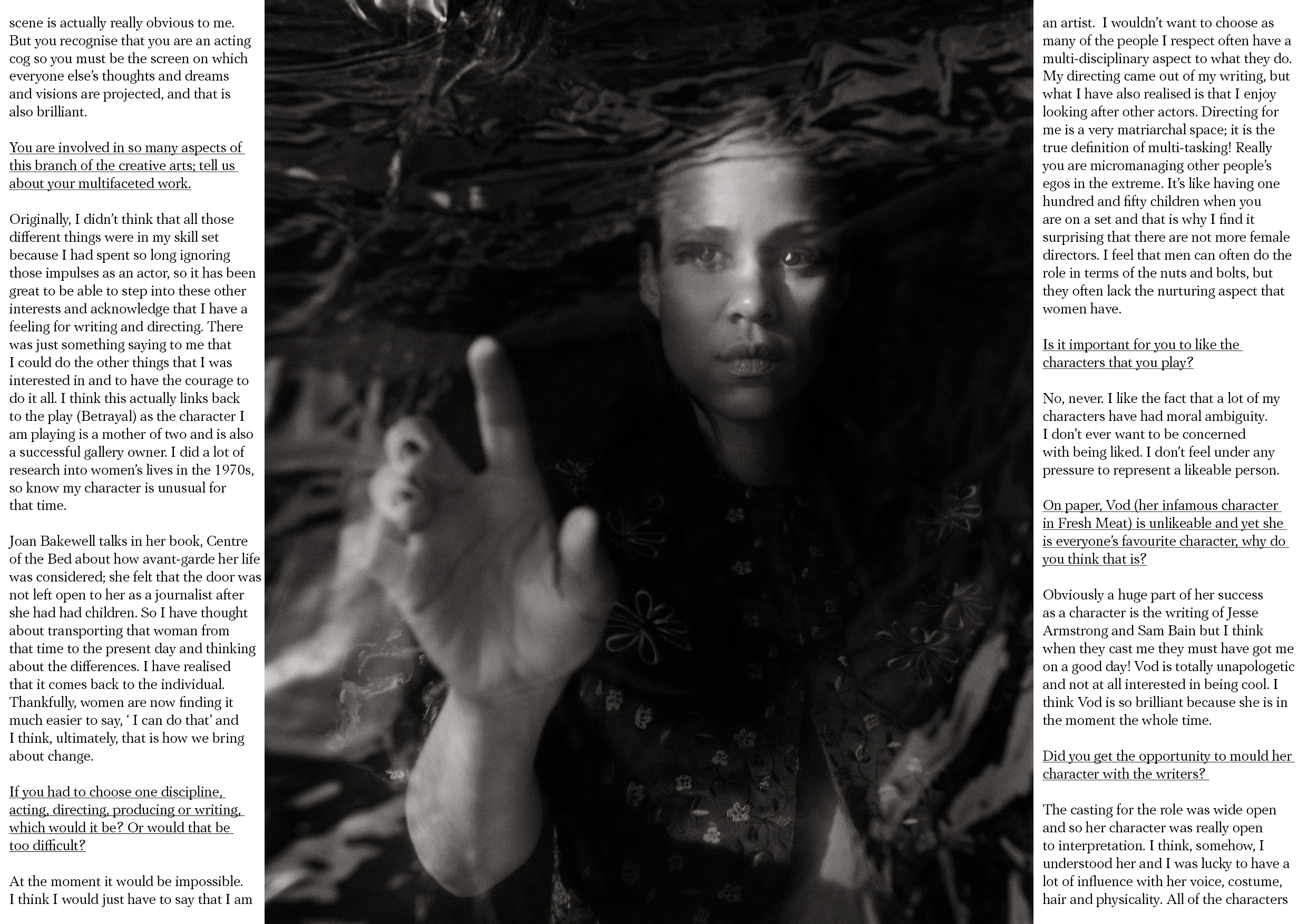 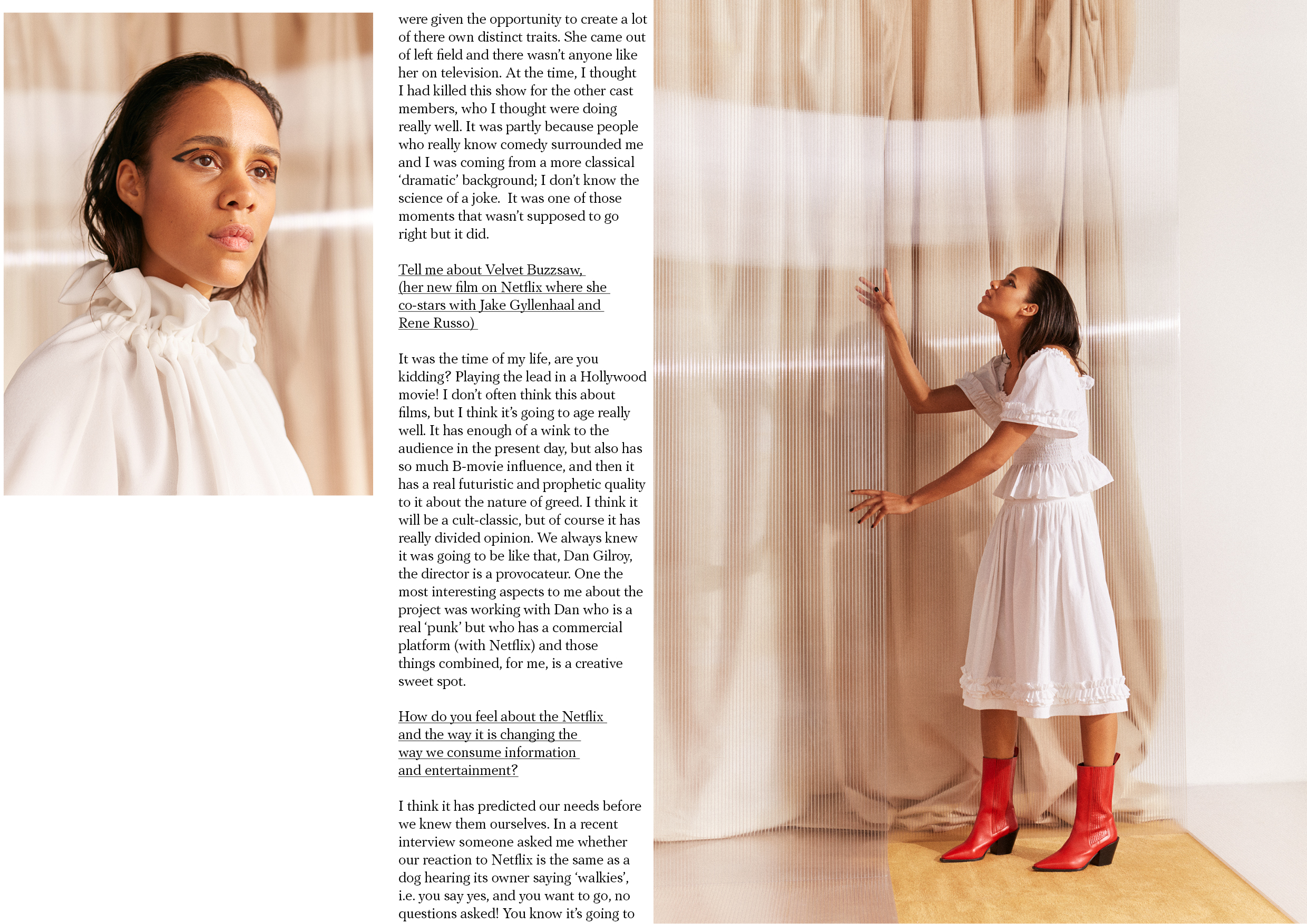 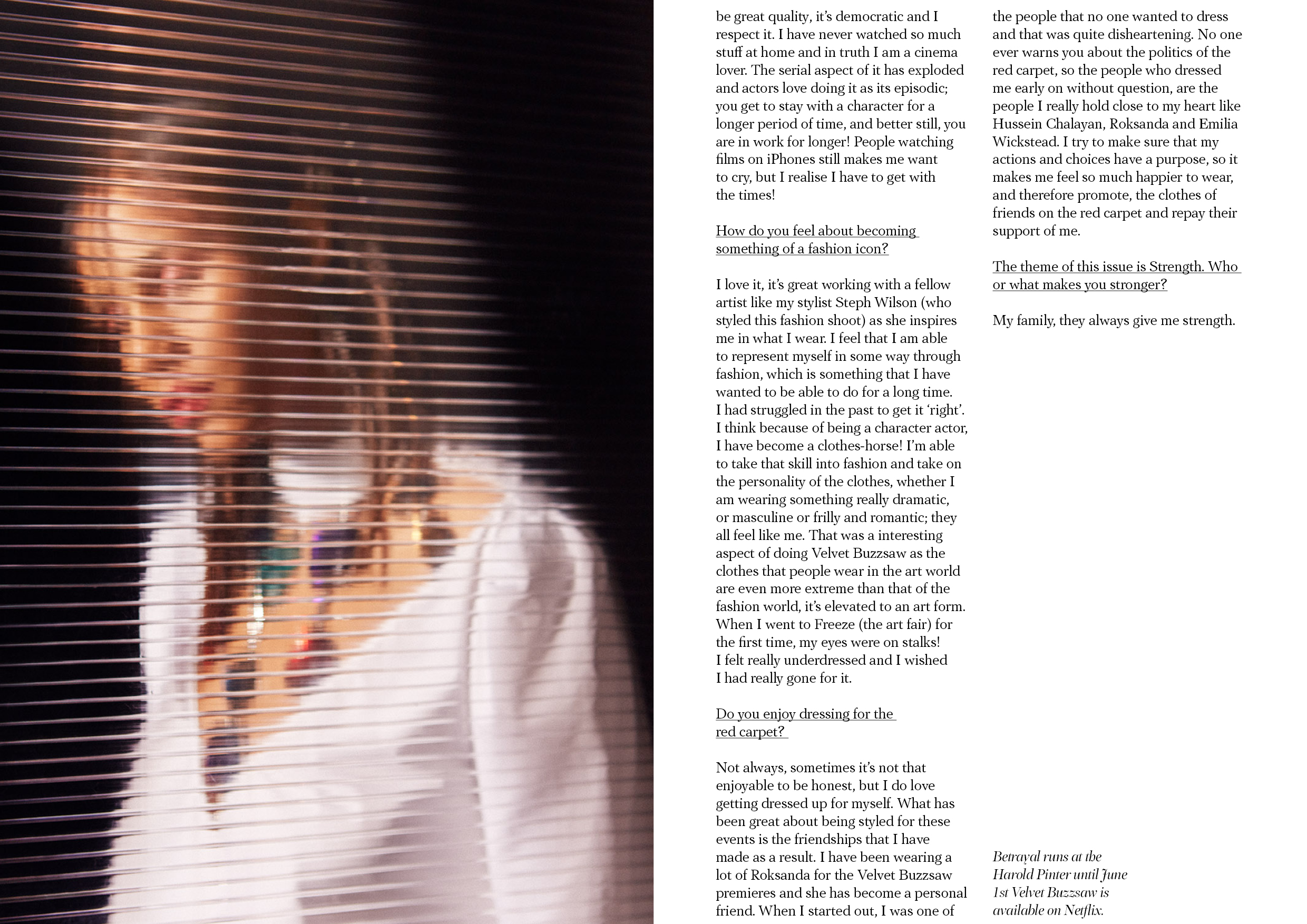 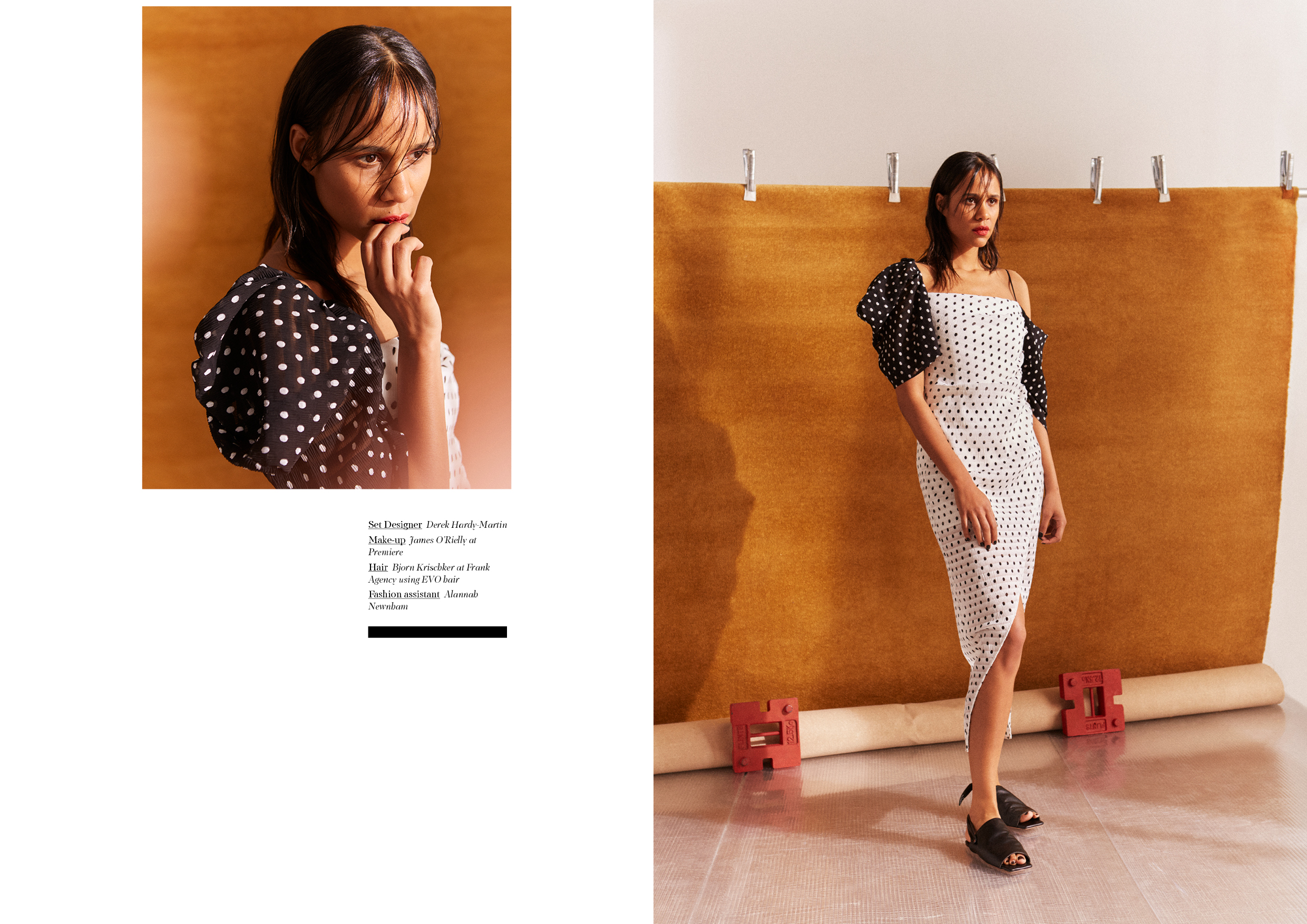